Home » Lifestyle » We compare Aldi, Lidl, Tesco and Sainsbury's Irish creams to see if they're better than real Baileys

The supermarket’s £4 bottles of festive plonk scored highest in our Sun Money investigation for their sweet flavour and low price. 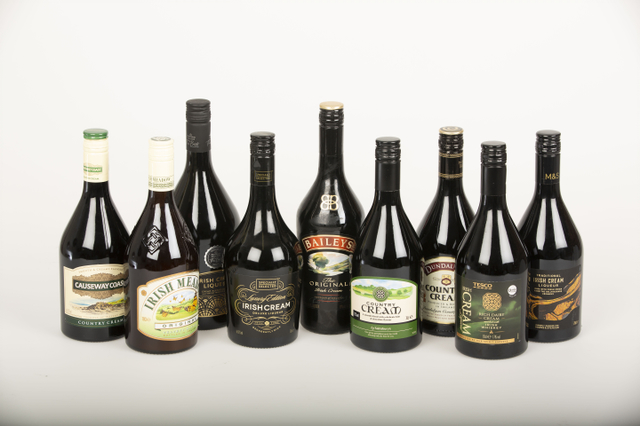 In comparison, a 70cl bottle of Baileys – which didn’t stand out with its taste – can set you back up to £12.

Iceland and Marks and Spencer came joint last, with Iceland described as watery and lacking in sweetness.

M&S, meanwhile, was slammed for its expensive price. 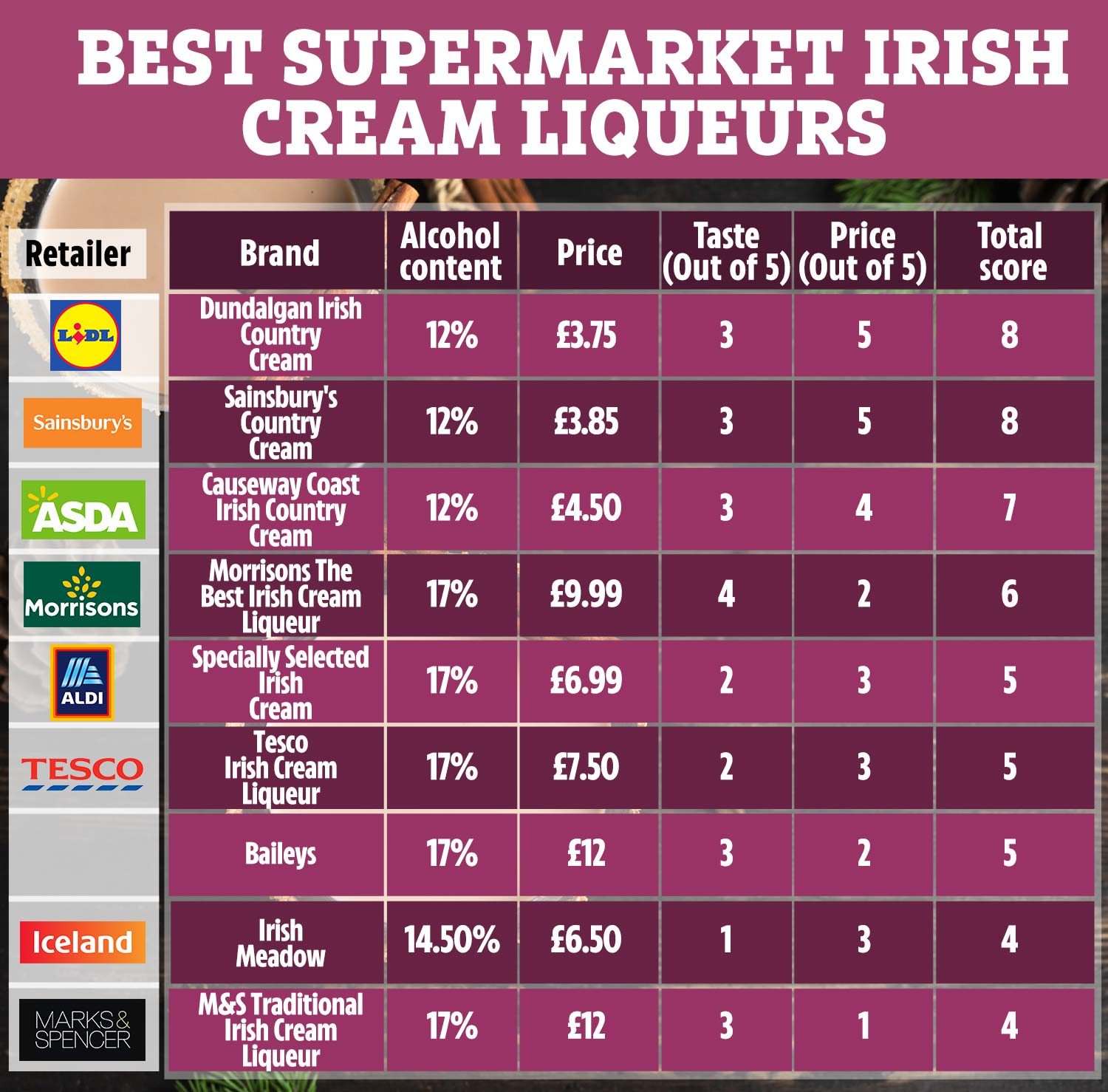 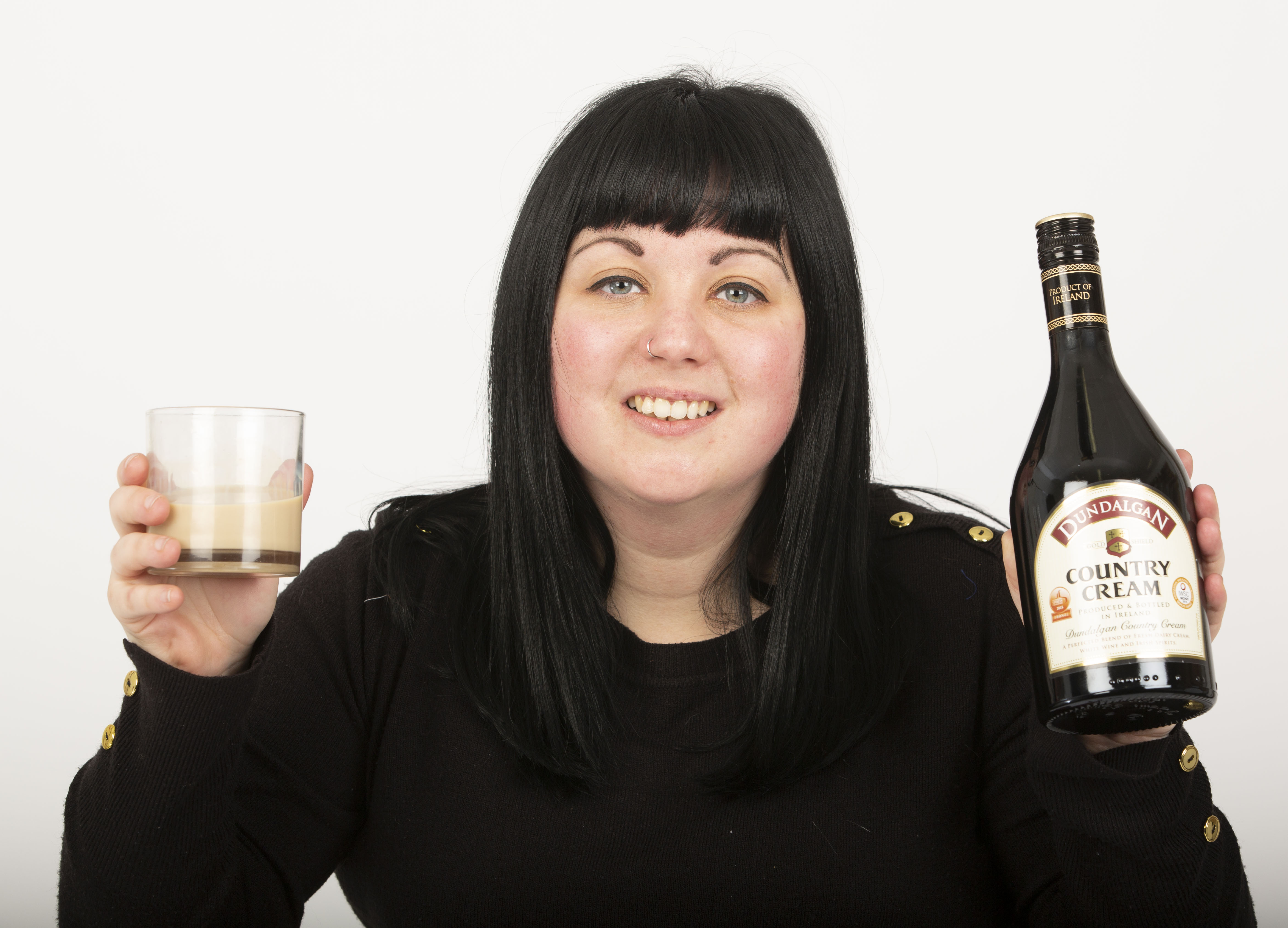 To give everyone a fair chance, we conducted the taste test blind – meaning we had no idea which supermarket booze we were tasting until after we gave our verdict.

We then rated each tipple out of five for price, and five for taste, to give an overall score out of ten.

Our selection starts from £3.75 for Lidl’s Dundalgan Irish cream, going up to £12 for M&S’ own-brand.

The bottles also have different levels of booziness ranging from 12% to 17.5% alcohol by volume (ABV) levels.

Of course, the score for taste is purely based on our opinion, and prices could change in the run-up to Christmas.

You can hear my verdict in the video above.

Here’s how each supermarket fared: 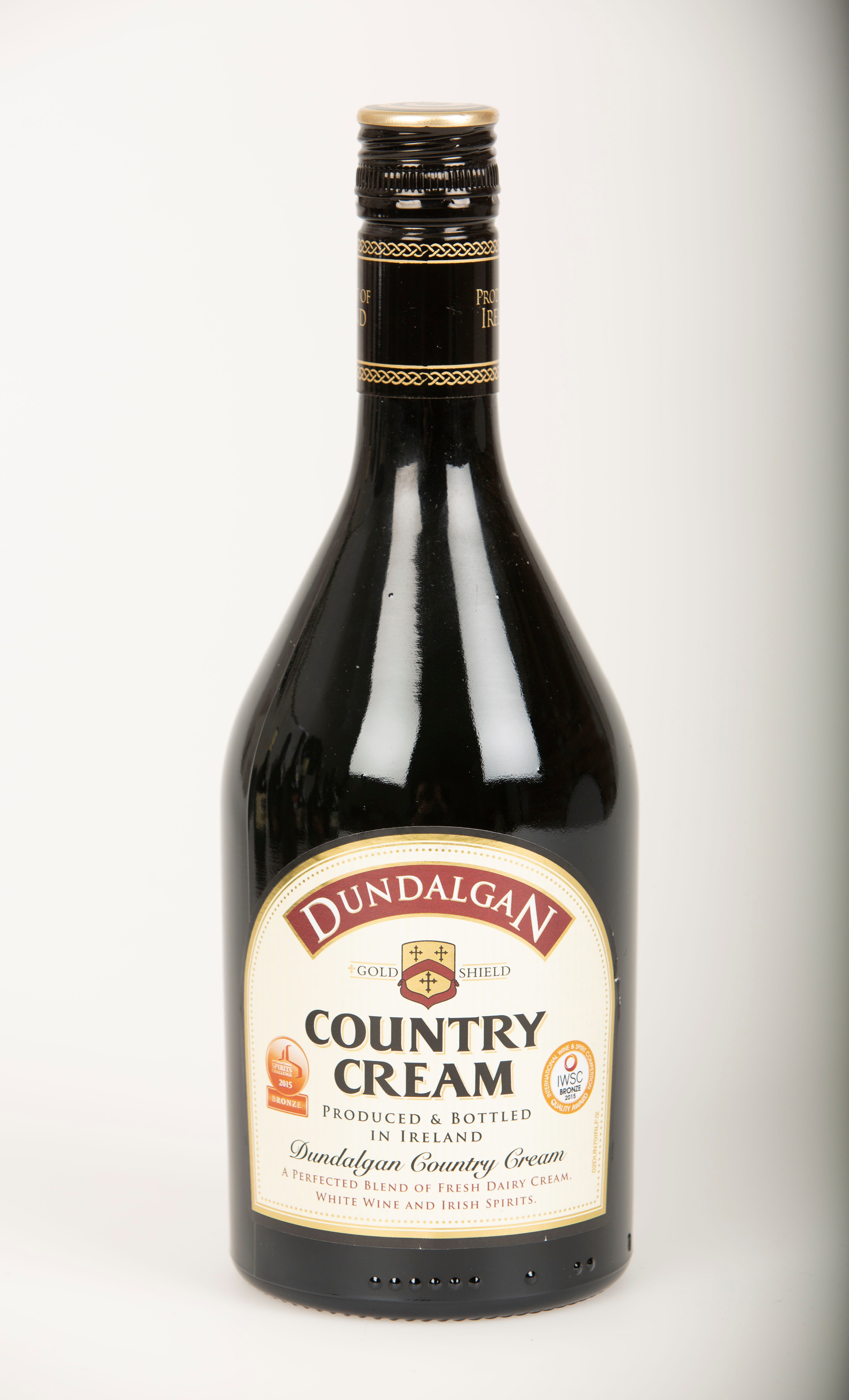 Not only was Dundlagan Country Cream from Lidl the cheapest, but it impressed with its silky smooth vanilla taste and decent level of thickness.

Other drinks in comparison were far more watery and less velvet-like.

However, it does depend on if you're looking for sweetness or a strong hit of alcohol in your dessert drink.

A spokesperson from Lidl said: "It's a Lidl favourite with our customers, so we're delighted to have been crowned crowned cream of the crop in this year's taste test." 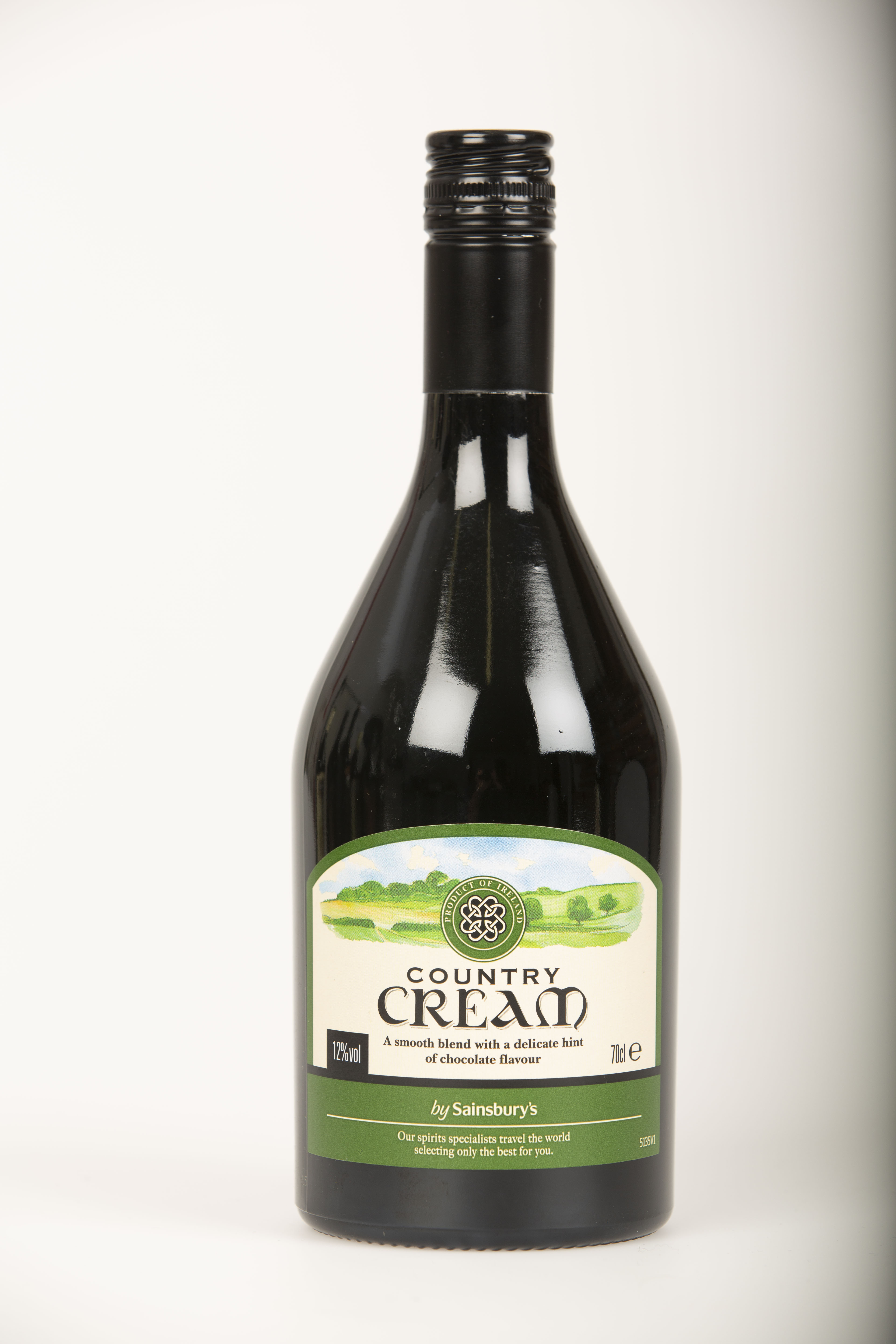 It was the creamy taste of Sainsbury's own-brand booze, combined with its super cheap price of £3.85 for 70cl, that put it joint-top in our taste test.

The flavour was described as like Christmas in a bottle, and the consistency was also nice and thick.

Again, we were surprised that it wasn't watery – as you'd assume it would be because it's cheap. 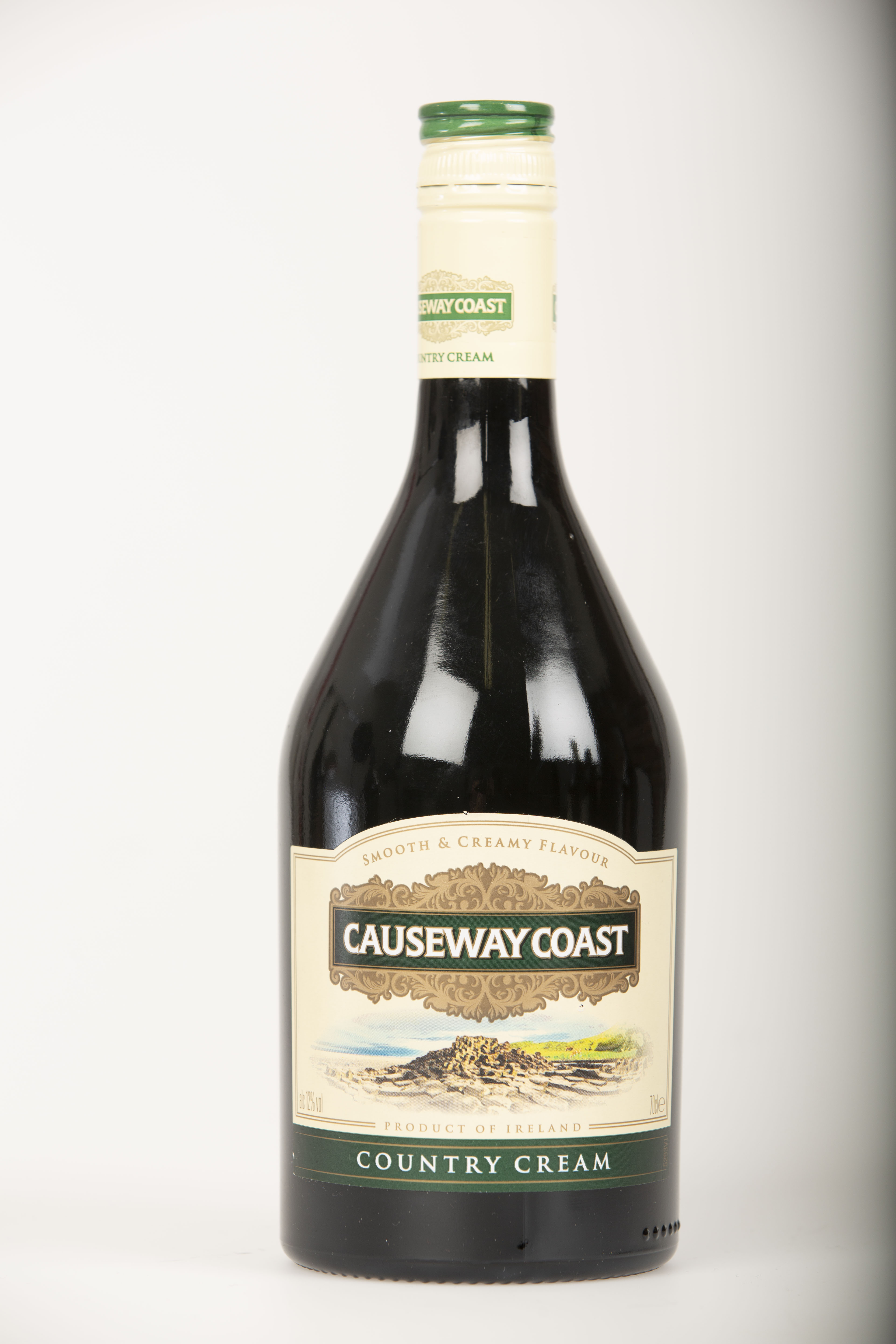 Asda's version of Irish cream was praised for its instant sweetness, which you could smell as soon as you opened the bottle.

It also didn't have too strong of a whiskey kick, which made it go down nicer than stronger brands.

It wasn't as thick as the Lidl and Sainsbury's drinks though, so it lost points for that. 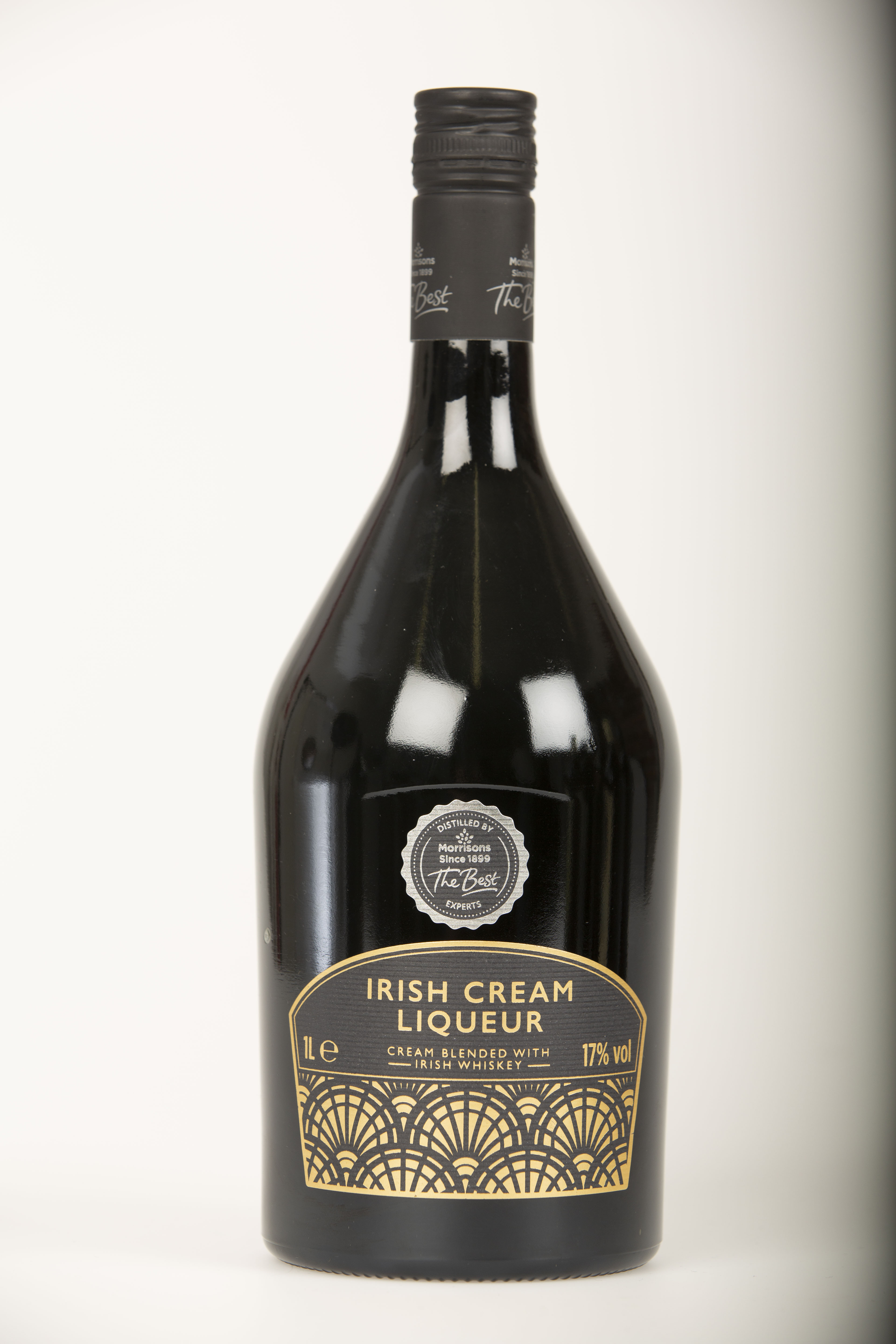 Morrisons actually came top for taste with its almost toffee-like flavour – but it lost points for price.

The flavour also wasn't enough to convince us to spend £6.24 more compared to Lidl.

The dearer cost is because Morrisons only stocks Irish cream from its luxury The Best range. 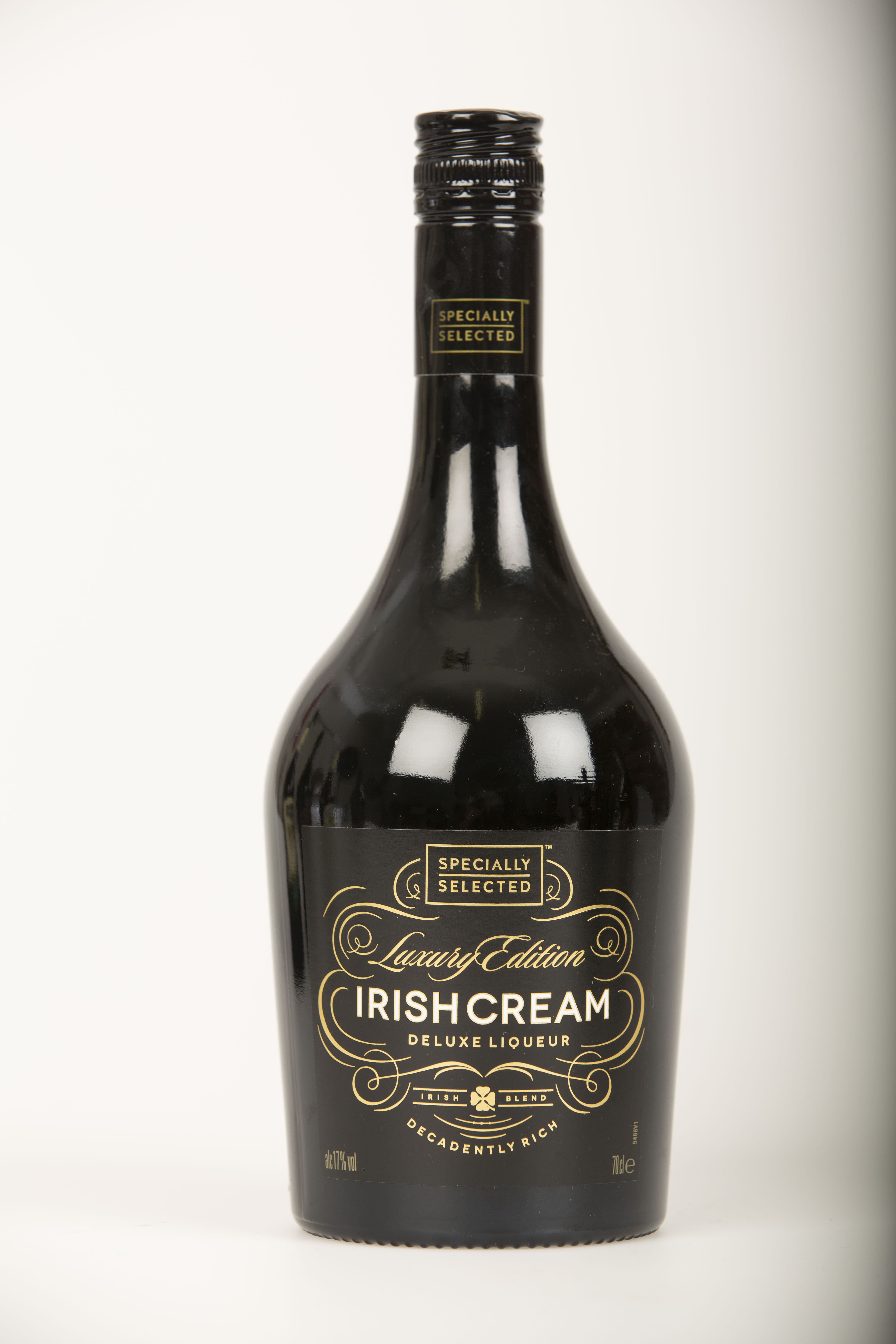 We enjoyed the "sweet, nutty" taste of the Aldi Specially Selected Irish Cream – although it did have a harsher alcohol taste.

But still, it works out half the price of Baileys at £6.99 and we'd say it's definitely worth the saving.

Aldi also do a cheaper Ballycastle Irish cream liqueur, priced at £3.75, but the supermarket told us it's phasing this out. 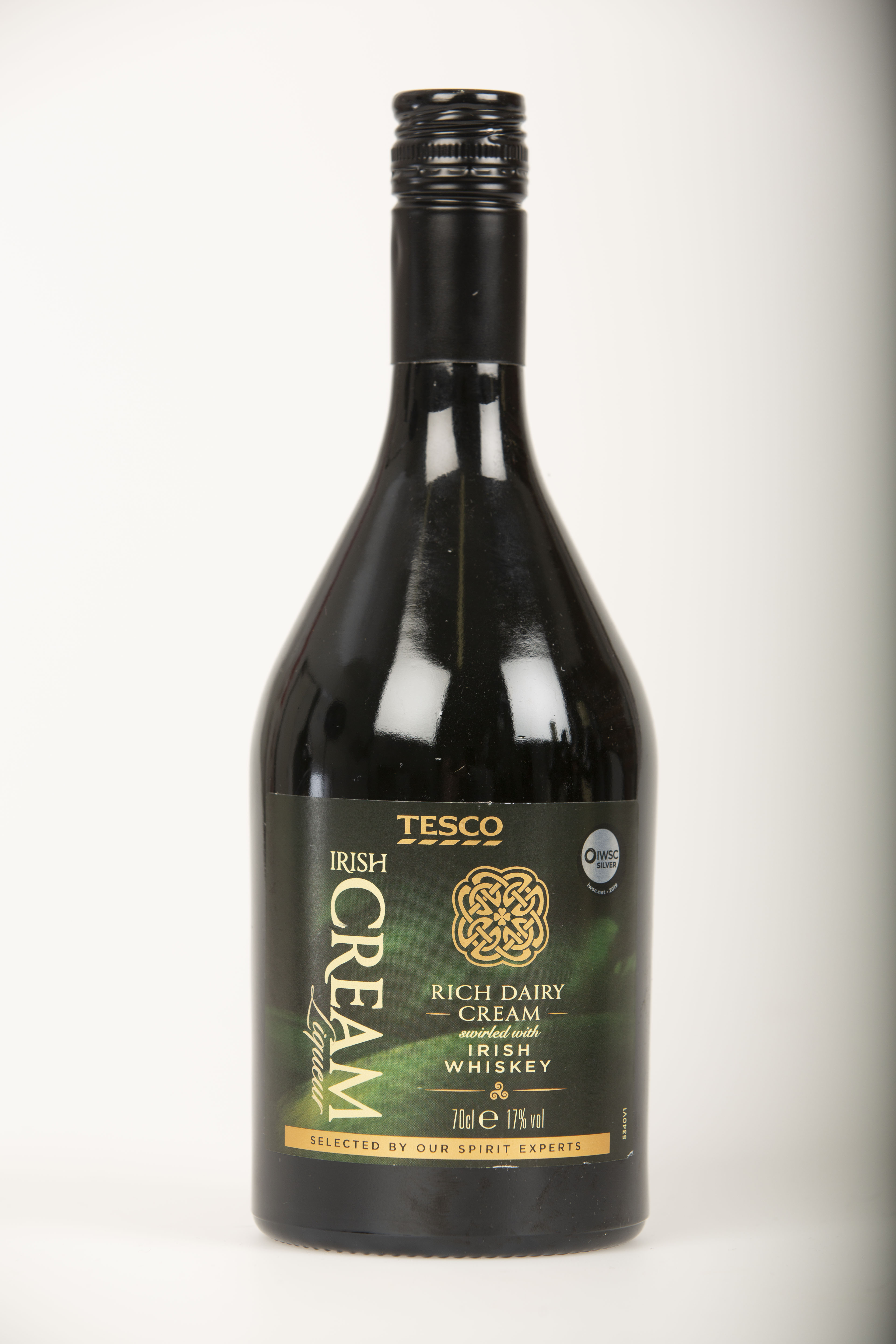 This booze wasn't as sweet as others we tasted and it definitely had more of a whiskey rush.

We'd recommend Tesco's version for people who like a stronger Irish cream liqueur – and it's £4.50 cheaper than actual Baileys.

Both have an ABV of 17% – the highest percentage in our experiment. 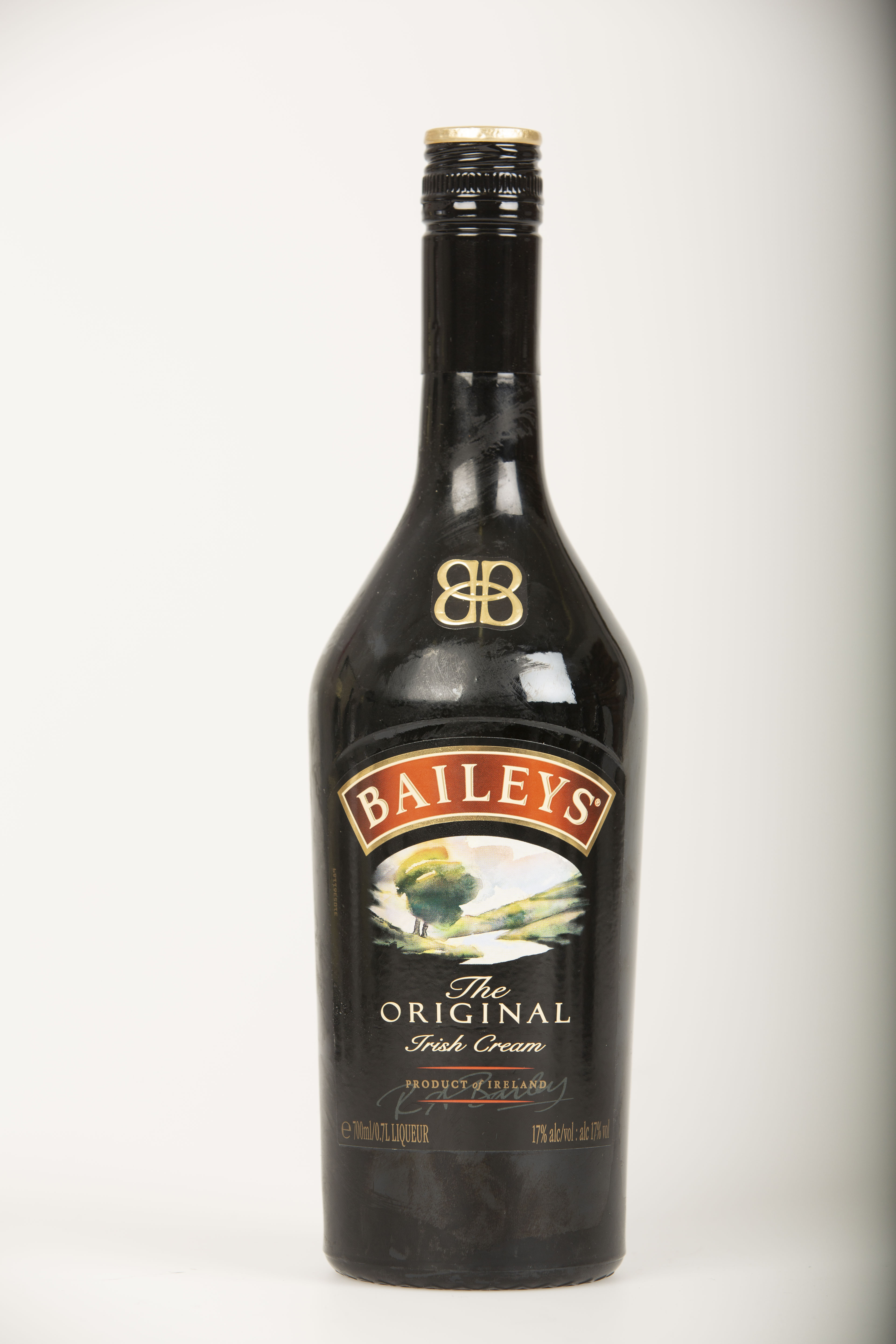 You can't mistake the thick and creamy taste of Baileys, but we'd be lying if we said it was our drink of the day.

It does have that characteristic sweet flavour, which tastes almost chocolatey.

But was its taste that different, compared to cheaper brands? Sadly not.

It definitely wasn't enough to make us want to pay up to £8.25 more compared to cheaper tipples. 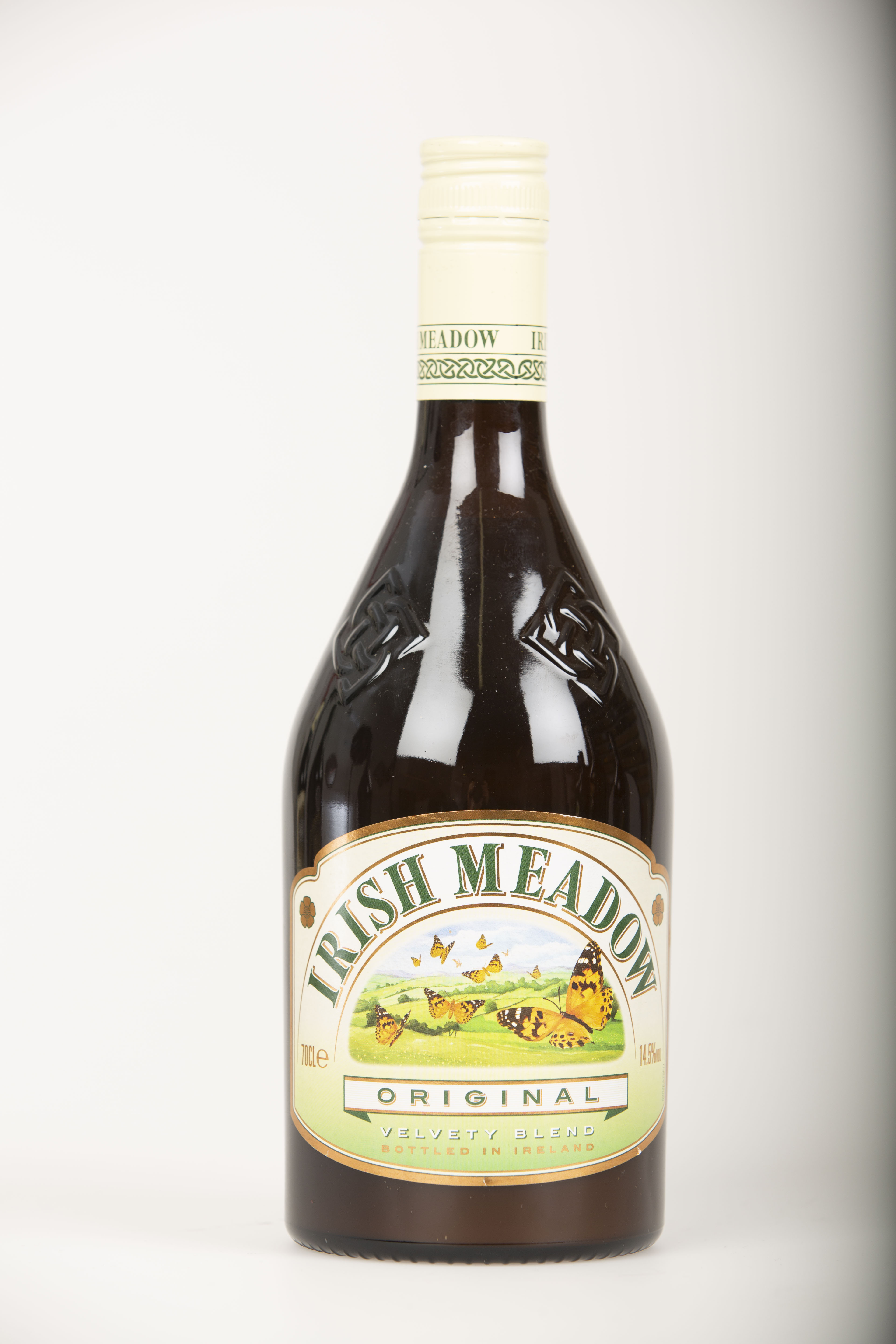 Iceland's Irish Meadow was a bit too watery for our liking and was missing that characteristic smooth texture.

In our opinion, the cheaper bottles in our taste test were much creamier.

The flavour also wasn't as sweet and actually had an almost bitter aftertaste. 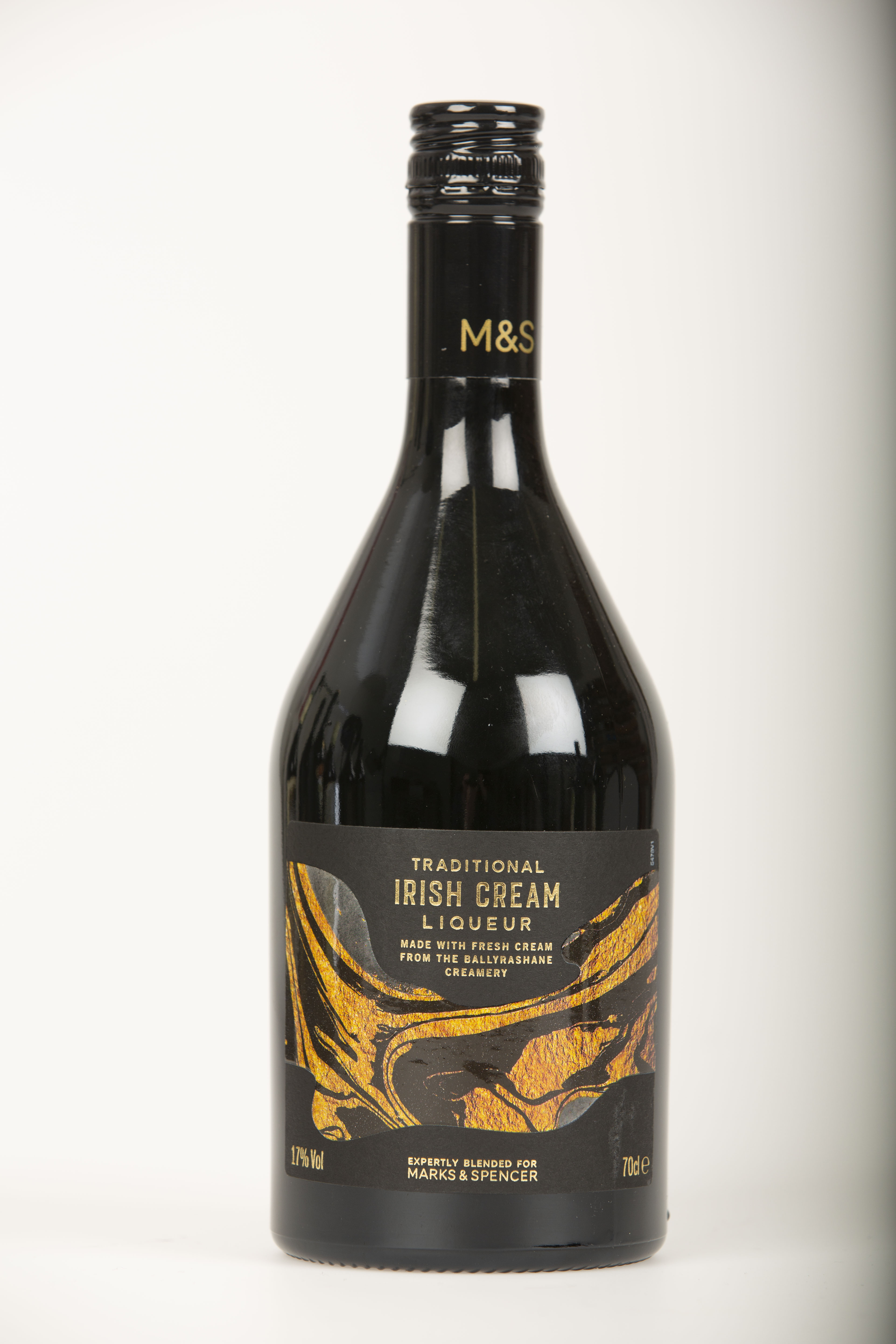 M&S' version of Irish cream gave off an instant strong smell, but the taste was surprisingly mellow.

It wasn't as nice as actual Baileys though – despite costing the same price at £12 for 70cl.

However, the supermarket does currently have an offer on this booze, with it reduced to £8 until the end of the month.

In our opinion, you should save your cash and go for the cheaper alternatives.

For more taste tests, we've also compared supermarket mince pies including Aldi, Lidl and Tesco to see which contains the most filling.

Plus, here's what happened when we put Christmas sandwiches from M&S, Aldi and Asda to the test.

Check out how other supermarket quirkiest festive feasts stack up when it comes to calories.