The Vanuata island tribe who worship Prince Philip as a God have told how they believe his spirit will return home to their island and will bring peace and harmony to the world.

Tonight’s documentary, Prince Philip: God Of Our Island, which airs on More 4 at 10pm, is an ‘alternative obituary’ of the Duke of Edinburgh, who died last Friday aged 99, and is told by the Yaohnanen tribesmen on Tanna, a remote island in the South Pacific.

The 400-strong community believe that after his death, Philip’s spirit will return home to their island, and will bring peace and harmony to the world.

The film follows their five ambassadors – who came to the UK to meet Prince Philip in 2007 as part of Channel 4’s Meet The Natives – on a pilgrimage around their island, as they prepare the island for Philip’s return.

‘People may say that we’re crazy,’ says Albi. ‘But that makes me believe he’ll come home even more.’ 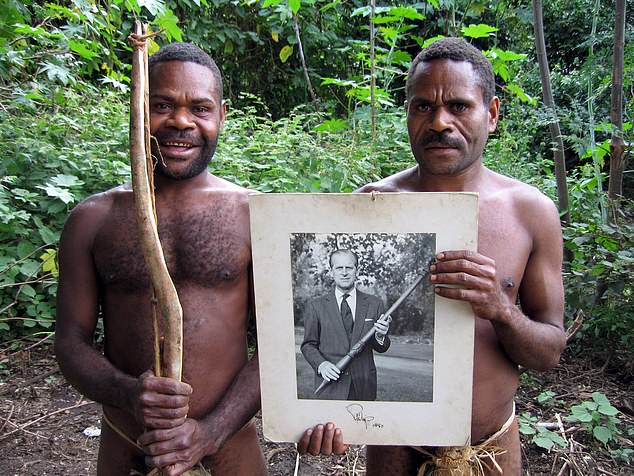 The Vanuata island tribe who worship Prince Philip as a God have told how they believe his spirit will return home to their island and will bring peace and harmony to the world. Pictured, holding a photograph of the Duke of Edinburgh 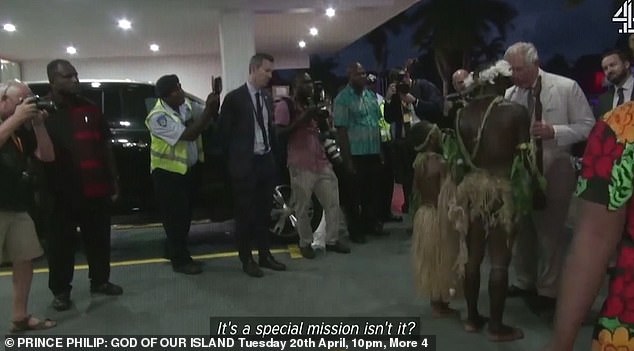 Recalling a meeting with Charles, one of the tribesman explains: ‘I told him that we are giving you this rod and telling you that the chiefs who foretold your Father’s prophecy are dead. He shook my hand and said: “Thank you. I almost missed what I came for. It’s a special mission isn’t it.”‘ Pictured, Prince Charles meeting the tribe

The tribe believe that Tanna and England were once the same island.

‘When they broke apart, things started to go wrong for you on the other side of the world,’ explains one tribesman. ‘So our God of the volcano sent his son on a special mission to try to help you in England.

‘You, the people of England, have always been told that Prince Philip was born in Greece, then he came to your country to join the navy where he met your young Queen.’

‘But we believe that Prince Philip is a spirit, born in Tanna, who was sent to England to bring peace, unity and harmony to the world.’ 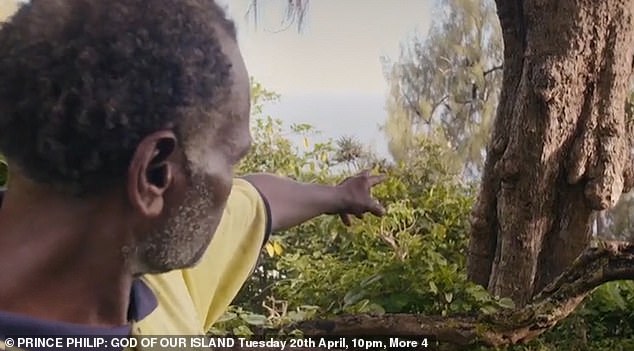 A member of the tribe can be seen heading deep into the forest and says: ‘Every year we plant new yams which grow new shoots that keep Prince Philip’s spirit alive.’ Pictured, the yam plants 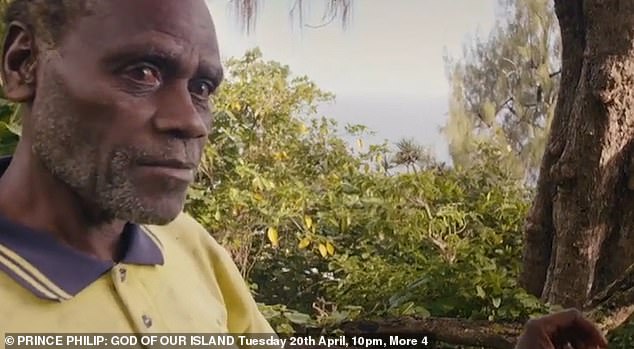 It is the tribe’s belief that Prince Philip and the yam plant are one defined being which keeps all of us alive. Pictured, the yam plants

Now he has died, the tribe believe it’s time for that prophecy to be fulfilled.

‘All happiness comes from Him,’ says one tribe member, while another enthuses: ‘I love Him so much…I pray for my life to connect to His.’

A third adds: ‘He’s the spirit and he’s the son of our god. Everyone believes in him and his name is Prince Philip.’

In 2007, five of the tribe members were invited to travel to England to meet Prince Philip as part of Channel 4 documentary, ‘Meet the natives.’ 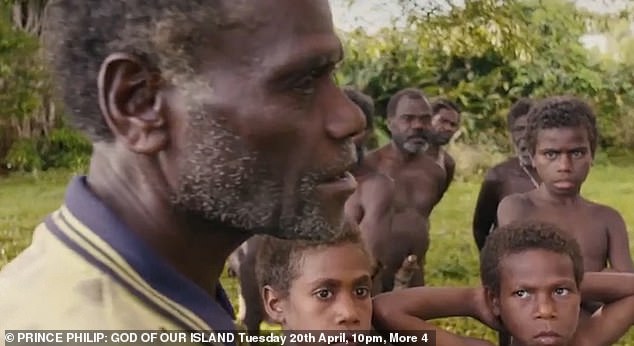 The tribe (pictured) believe that Prince Philip is a spirit, born in Tanna, who was sent to England to bring peace, unity and harmony to the world

During the trip, they took the opportunity to deliver a special message to the Duke of Edinburgh – with the chiefs wanting to know if the pawpaw was ripe yet or not – which was their way of knowing whether Prince Philip’s spirit was ready to return home to the island.

Recalling the experience, one tribesman says: ‘I asked him, is the pawpaw ripe or not?’

He answered: ‘Whether the pawpaw is ripe or not, go and tell Chief Kwia that now it is cold…when it is warm…I will send a message.’

‘My heart rejoices that He is returning to Tanna,’ exclaims one,’ while another explains: ‘The prophecy states that when Prince Philip’s work is over in England, He will come back to Tanna. The fish will leap from the sea, the harvest will never fail and we will all live forever.’ 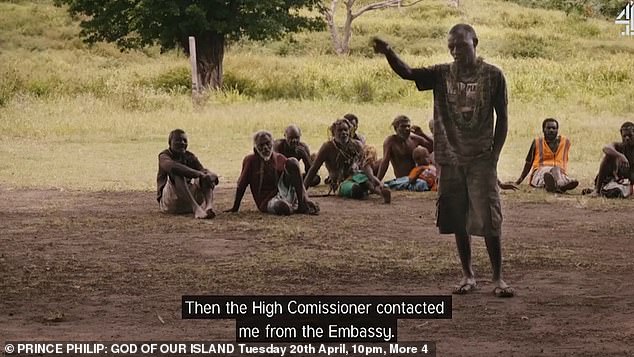 During their pilgrimage, the tribe are met with some resistance from those who have abandoned the traditional ways, actively rejecting Western lifestyles and Christianity (pictured) 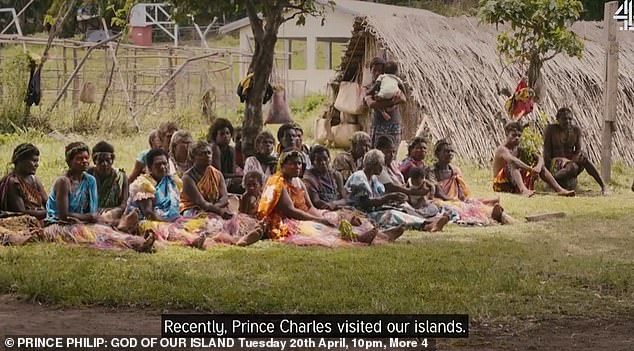 Keen to share one message with those who no longer believers, a member of the tribe recalled a recent meeting with Prince Charles

The tribesmen and women on the South Pacific island of Tanna in Vanuatu will mourn by dancing, speeches and the ceremonial drinking of the native plant kava, according to an expert on the culture.

The group – who believe Prince Philip is their god and the incarnation of a volcano spirit – could also anoint his son Prince Charles as his successor.

Australian Museum research associate Kirk Huffman is considered an authority on what is known as the Prince Philip Movement – a group based in villages in the south-western part of the island of Tanna in southern Vanuatu.

He said followers all speak a language called Navhaal – which is only spoken by approximately 4,500 people worldwide – just a few hundred people are associated with the Philip Movement.

He added: ‘Those in the movement have been very saddened to hear about his death.

‘As soon as the messages about his death came they had meetings.

‘They got leaders, important people from two, possibly three different factions of the group together at a meeting to sort out how they’re going to deal with the funerary situation.

‘They held funerary speeches last weekend. There may be special dances.

‘Dancing there is a highly-respected form of saying something powerful, and there may be some that have already gone on.

‘There may be a periodic display of some of the movement’s Prince Philip memorabilia – photographs, letters, that sort of thing. There’ll also be more periodic speeches by various traditional leaders there.’

However, possibly the most important element of the funerary rituals will be evening sessions of the men of the group drinking kava – an infusion made from the root of a pepper plant.

Mr Huffman describes the drinking of kava as a ‘sacred activity’, which is the ‘liquid key that opens the door between the material world and the non-material world’.

He said: ‘Through the medium of kava, one can pass messages back and forth between those worlds.

‘Traditionally, the purpose of drinking kava is to ensure the continuity of life as it should be.

‘Through the use of kava, you can get better rain, better sun, better crop fertility, all sorts of things. Because you put these requests into the world through the kava.

‘There’ll be that same sort of thing in Tanna for Philip’s spirit. There’ll be messages and ideas being sent and received, that will be very important.’

Mr Huffman explained that, in traditional religions throughout the region of Melanesia – which consists of Vanuatu, Fiji, the Solomon Islands and Papua New Guinea – death is merely considered the end of someone’s physical form, with their spiritual form persisting.

He continued: ‘Your spirit form can recycle. You can be reincarnated. It can wander around, it can come out years later in another person.

‘So from the point of view of the people of the movement, (Philip) is originally from Tanna.’

‘These days we have plenty of food and our life is good.

‘Why then do we really need Prince Philip?’ asks one person, to which another replies:

‘The goodness we are experiencing is a gift from someone else and that someone who is greater than all of us, is Prince Philip.

‘That’s the story we are delivering to the people everywhere. He is the ending of the story and only He has the final word.’

A further member of the tribe can then be seen heading deep into the forest and says: ‘Here we grow the sacred yam plant that we worship.

This yam propagates the next one, which then produces new yams. Meaning that He can never really die because the yam spirit is eternal.’

It is the tribe’s belief that Prince Philip and the yam plant are one defined being which ‘keeps all of us alive.’

During the pilgrimage, the tribe pass through the mountains where they believe the spirit of Prince Philip was born before he left for the coast.

At last they arrive at the coast where Prince Philip left for England to marry the Queen – it’s also where he’s said to have returned some 50 years later.

Now, many years later, the human form of Prince Philip has died, and the tribe believe he has finally sent them his sign.

‘This is the pawpaw I asked about in the castle,’ explains the tribesman, cutting it from the plant. ‘The one that Philip told me about. And now it is ripe!’

Believing the time is right for the Duke of Edinburgh’s spirit to return to Tanna, the five of them embark on a pilgrimage across their island in a bid to share the good news with everyone they meet.

In the 1970s, the Royal Britannia was on the tour of the south pacific when it sailed past our island.

‘Our grandfather saw Prince Philip on board, lit up by the sun.

‘It was that moment which confirmed to us he really is defined.’

A tribesmen who witnessed it happen, explains: ‘My father, Kehma, told me His kava here. Philip’s ship was due to pass our island.

‘Dad said He will come here to drink kava at night. As I prepared the kava, Prince Philip shone a search light from His ship.

However, during their pilgrimage, the tribe are met with some resistance from those who have abandoned the traditional ways, many of the villagers still live the ‘kustom’ way of life, actively rejecting Western lifestyles and Christianity, and continue to worship their Gods.

Keen to share one message with those who no longer believers, a member of the tribe explains: ‘Recently, Prince Charles visited our islands.

‘The High Commissioner contacted me from the Embassy. He said it’s vital Charles meets us five ambassadors who met his Father in England.

I was already in Port Vila, so I went to give Prince Charles a message on behalf of us all.’

He continues: ‘On his arrival he shook hands with me and I told him that we are giving you this rod and telling you that the chiefs who foretold your Father’s prophecy are dead.

He shook my hand and said: “Thank you. I almost missed what I came for. It’s a special mission isn’t it.”‘

‘Charles accepted from me the story about his Father. He will keep our faith alive. Prince Charles.’