Valentine’s Day disasters! People share their most mortifying experiences – from one who wet themselves on a date to another who vomited over their other half during sex

Lots of people hope for a picture-perfect romantic date on Valentine’s Day, but sometimes it just doesn’t go to plan.

People from around the world have revealed their most embarrassing stories from February 14 in anonymous posts on the confessions website Whisper.

The tales of woe include an unfortunate dater who wet themselves during a romantic liaison when they were 16, and another who threw up over her beloved after eating ‘bad sushi’.

Here, FEMAIL shares a selection of the most cringe-worthy confessions… 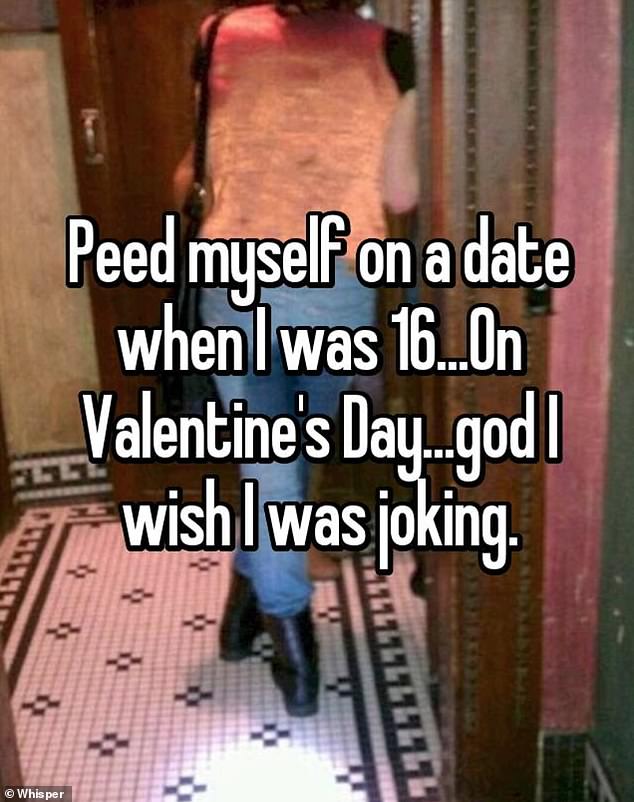 Wish it was a joke: One person wet themselves on a date when they were 16 and the date was on Valentine’s Day 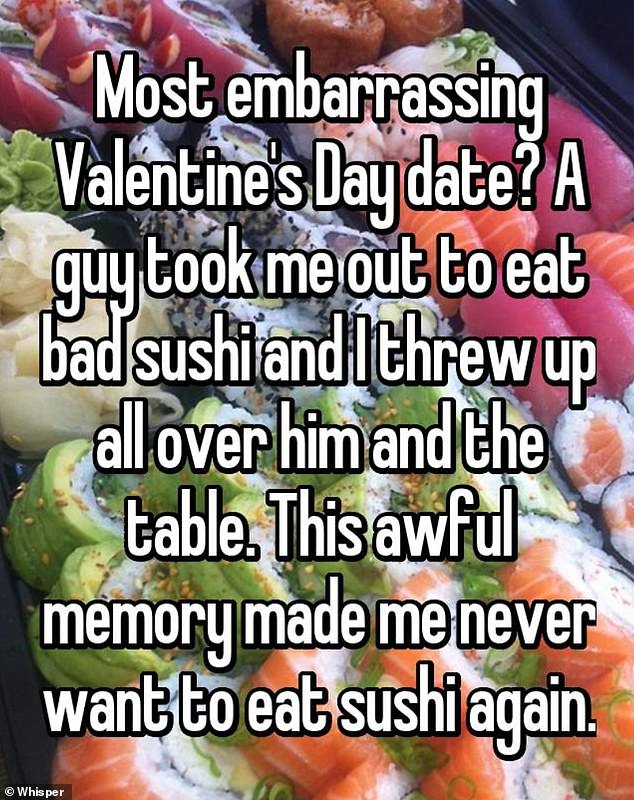 Painful memory: Someone admitted they can’t eat sushi anymore after they threw up all over their date and the table after eating it 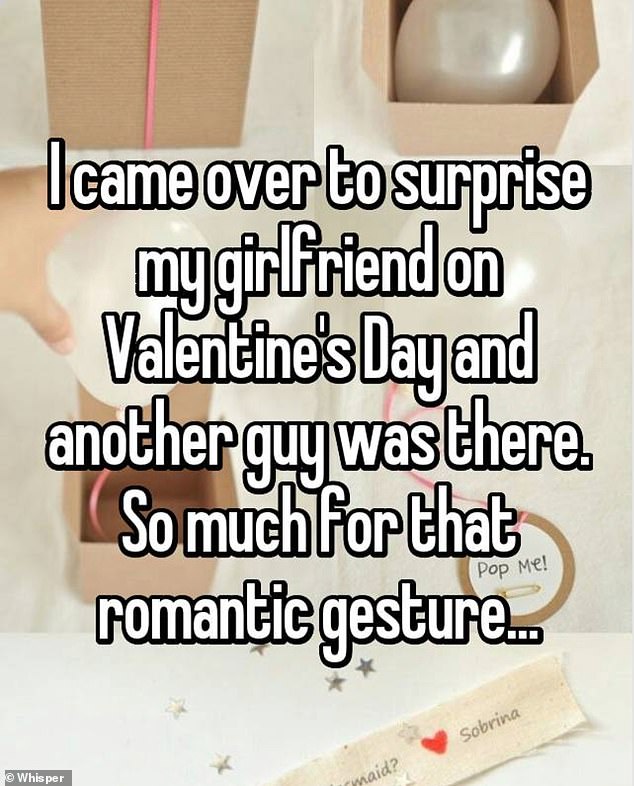 Awkward: One person admitted that, after they went to surprise their girlfriend on Valentine’s Day, they found another man there 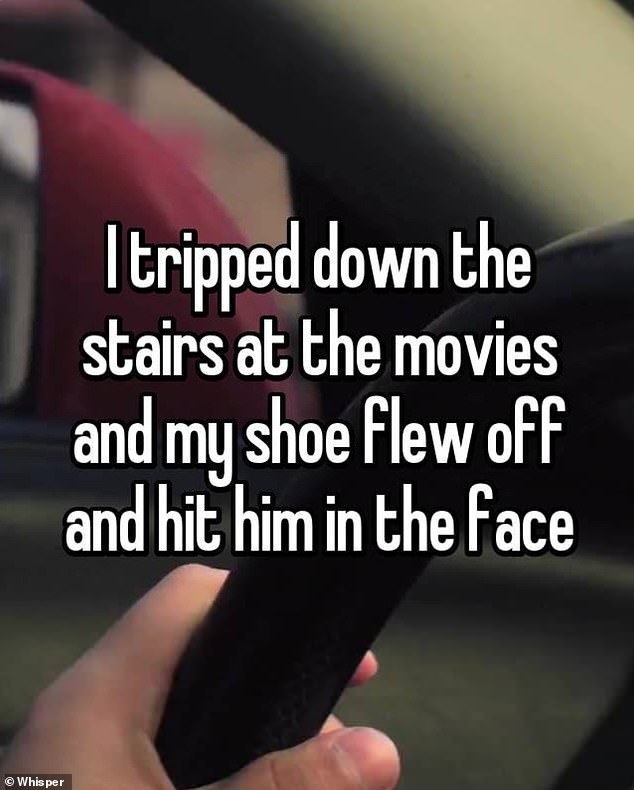 Oops! Someone else admitted to a clumsy mistake of falling down the stairs at the movies, which ended up with their shoe hitting their date’s face 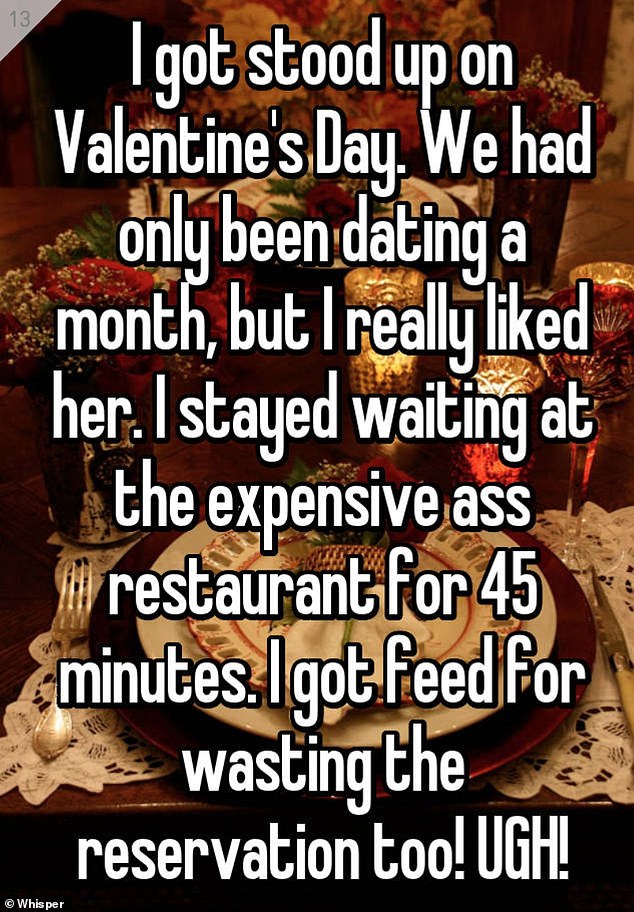 ‘UGH’: One person ended up sitting at an expensive restaurant for 45 minutes after their date stood them up 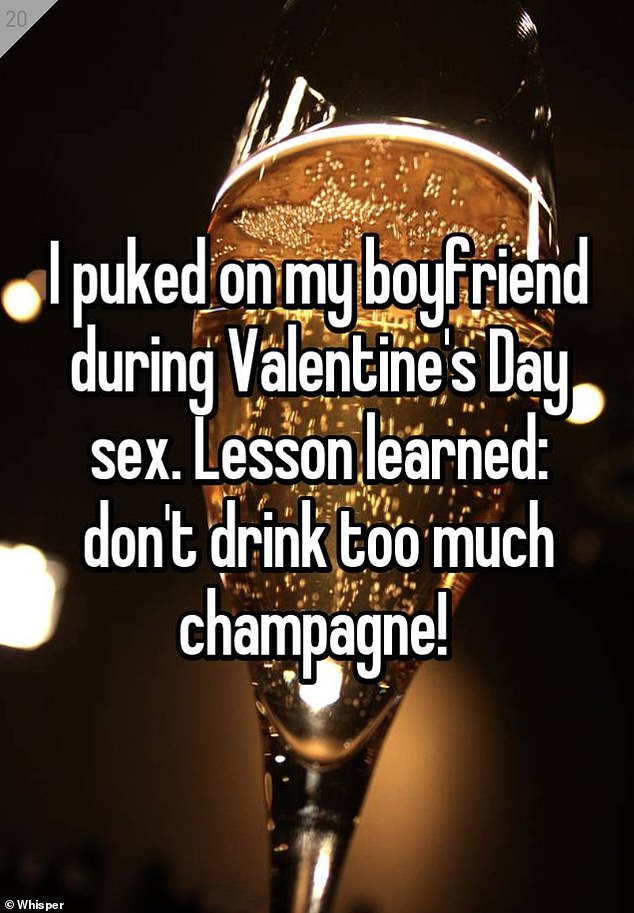 Lesson learned: Someone admitted to drinking too much champagne on Valentine’s Day, which resulted in them vomiting on their boyfriend during sex 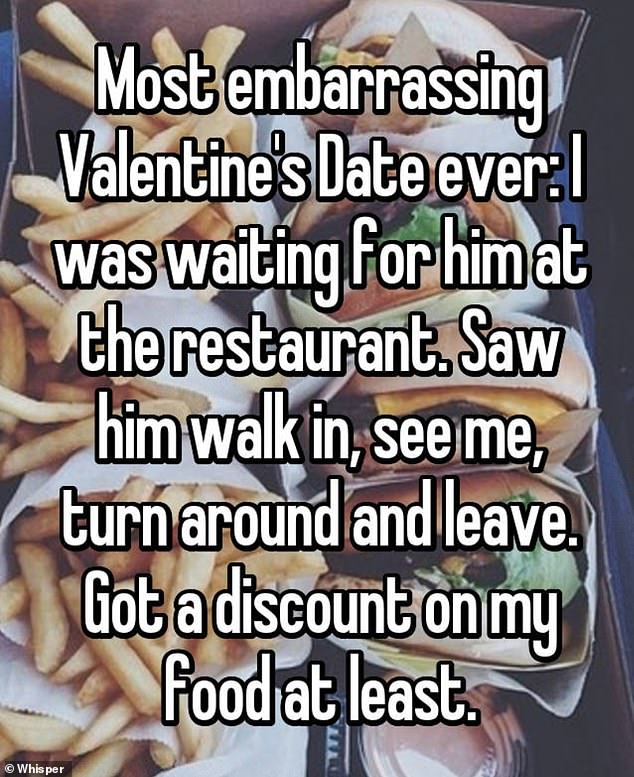 Change of heart: One person said they were waiting for their date at the restaurant, only for them to turn around and leave as soon as they saw their date 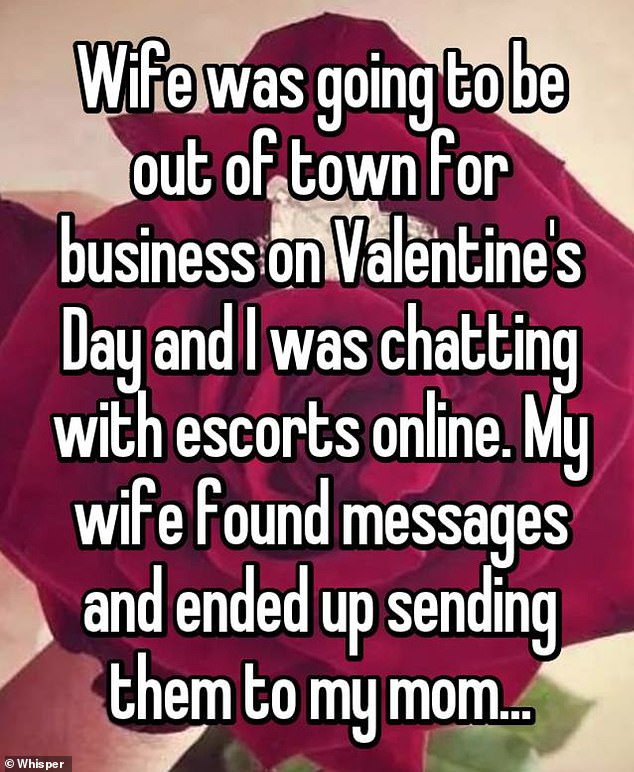 Found out: One wife found her partner was chatting to escorts after she was ‘out of town on business on Valentine’s Day’ and sent the messages to her partner’s mother 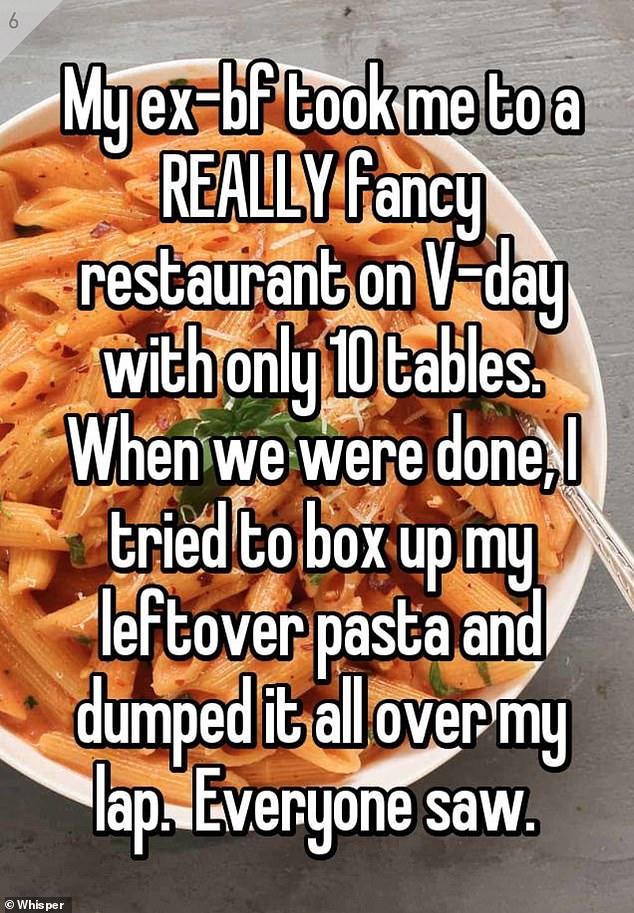 Messy end: Someone’s date ended messily after trying to put her leftovers in a takeaway box but ended up dumping it all over their lap 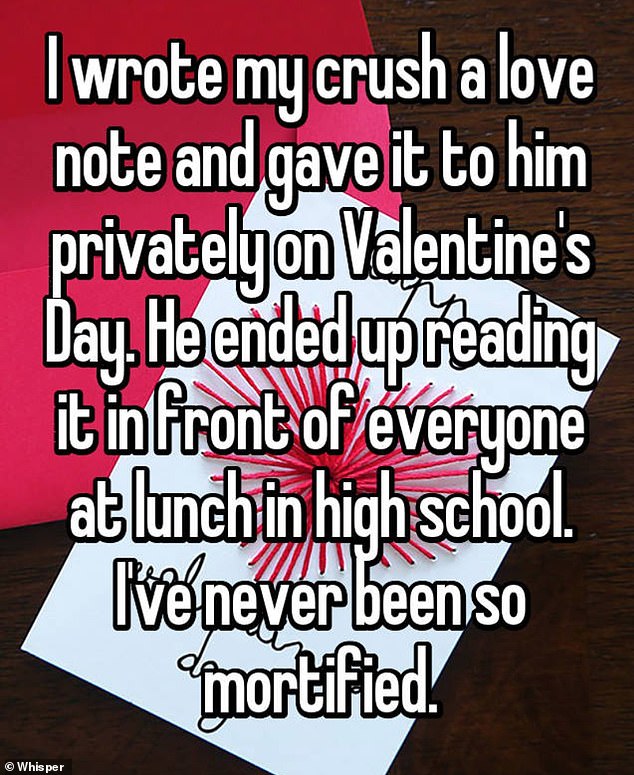 High school embarrassment: Someone wrote their crush a Valentine’s note, but he read it out in front of everyone at lunchtime 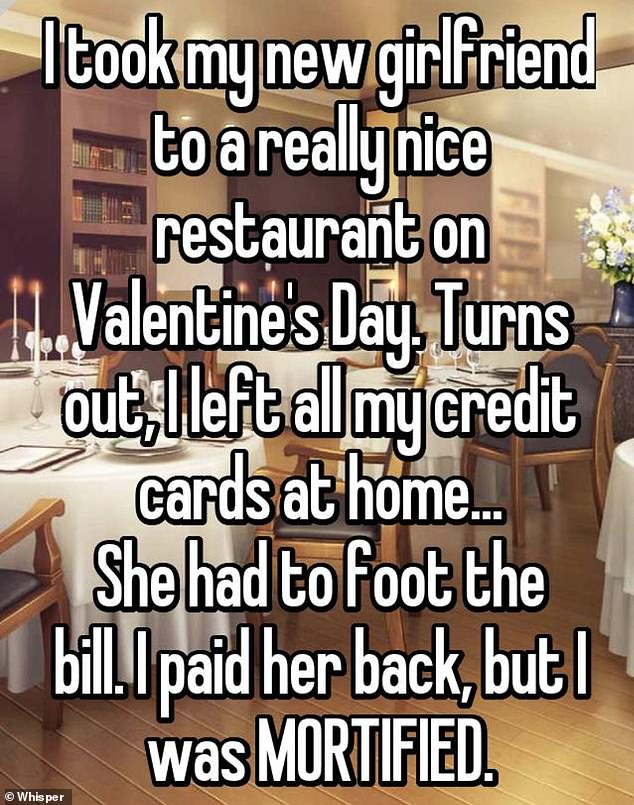 ‘Mortified’: After leaving all their credit cards at home, someone’s ‘new girlfriend’ ended up having to pay for their meal 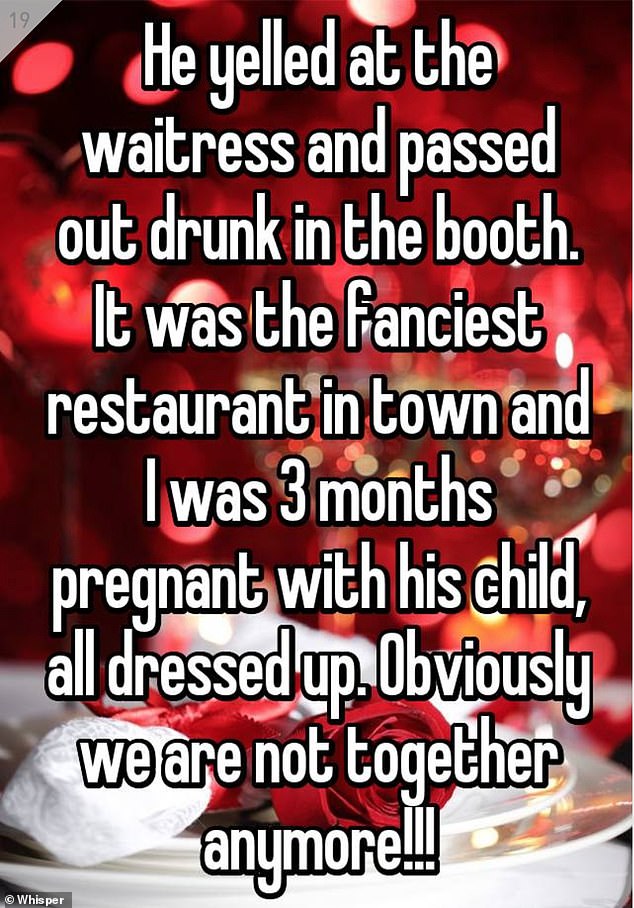 Resulted in the end: One mother, who was three months pregnant, broke up with her partner after he ‘yelled at the waitress and passed out drunk in the booth’ at the fanciest restaurant in their town on Valentine’s Day