The Nationals’ call for a one-off visa amnesty on up to 100,000 undocumented agricultural workers has been rejected by the federal Department of Home Affairs, presenting a test for the Coalition government as regional MPs warn illegal workers are unlikely to present for vaccinations.

Nationals MP Anne Webster brought a motion to the party’s conference last week calling for one-time legalisation of undocumented workers – many of whom work in regional fruit picking and other horticulture jobs – during the coronavirus pandemic. 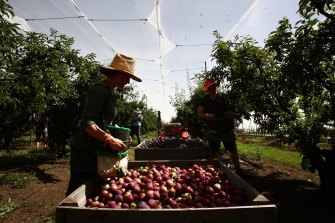 The motion, unanimously supported at the Nationals conference, was rebuffed by the Department of Home Affairs, which said an amnesty would “significantly undermine the integrity” of Australia’s visa system.

A recent report from the National Agricultural Labour Advisory Committee said there were between 60,000 and 100,000 undocumented workers in the country and they were likely to avoid contact with the government, including at vaccination clinics, due to fears they could be identified for deportation.

A department spokesman said the vaccine would be made available to everyone in Australia and testing would be conducted anonymously.

“Blanket regularisation of the status of unlawful non-citizens creates perverse incentives that would encourage increased irregular migration or other non-compliance with migration law,” the spokesman said.

“State and territory governments offer free testing for everyone, even for those who are not Australian citizens or permanent residents. The Commonwealth is not privy to the identity of those tested.”

Dr Webster, whose Mallee electorate in western Victoria is a major horticulture region, said she would “go back to the drawing board” with relevant ministers following the cabinet reshuffle last week when Peter Dutton was replaced in the Home Affairs portfolio by Ms Andrews.

The conference motion called for the Morrison government to “design an appropriate visa for undocumented workers in the horticultural industry. This could be delivered as a pandemic status resolution leading to either a permanent or temporary legal status.”

Dr Webster said an amnesty was needed to reduce the risk of coronavirus outbreaks in regional horticulture centres, where the proportion of undocumented workers who were likely to remain unvaccinated would be high compared to the general population.

She said a visa amnesty would also help address the worker shortages crippling agriculture, which has lost the majority of its traditional backpacker labour force due to international and interstate border restrictions.

“I hold by my argument that the pandemic gives us a special opportunity, when our borders are slammed tight, to address the issue,” Dr Webster said.

She added that undocumented workers would be able to follow work across state borders if they were granted legal status.

Adelaide University academic Joanna Howe, who has conducted extensive research into undocumented workers, said the “vast majority” were lured to Australia by criminal networks under false pretenses, including claims tourist visas would provide them with workplace rights.