Unions representing aged care staff, ambulance workers and teachers are wary of the federal government’s call for mandatory coronavirus vaccinations as they contend with a membership base that includes some anti-vaxxers as well people who passionately support a jab.

Prime Minister Scott Morrison said last week that state, territory and federal health leaders had agreed in principle there should be mandatory vaccines in aged care but only Western Australia has given a timetable, with mandatory shots due in August. 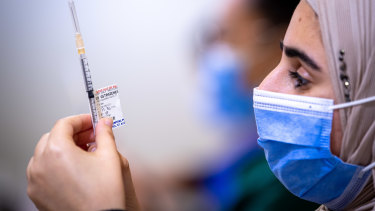 Unions say they fully support vaccination but have a sceptical view of the Morrison government’s push to mandate it for some workers.Credit:Eddie Jim

The unions say they back vaccines and will support the health authorities if they decide to make a coronavirus vaccine a condition of employment, but argue the main barrier to having workers vaccinated are problems with supply and distribution.

“You can’t mandate what you can’t get,” said Lloyd Williams, the national secretary of the Health Services Union, which represents staff in aged care homes.

Australian Nursing and Midwifery Federation federal secretary Annie Butler, whose union is the country’s largest, called the push for mandatory vaccination a “smokescreen” to cover the government’s failures.

“We have been asking them for two months: where’s the data, where’s the central coordination, how can we know where the gaps are, when you don’t know where you’ve even done it,” Ms Butler said. Like Mr Williams, Ms Butler wants workers to be given paid time off to be vaccinated.

Last week the federal government announced it would make it mandatory for aged care providers to report staff vaccinations after the Commonwealth Health Department admitted it did not know how many had been vaccinated.

Hundreds of aged care residents died after contracting COVID-19 during Victoria’s second wave and debate flared about making vaccinations mandatory after a handful of new cases in recent weeks that appear to have been unwittingly transmitted by nursing home staff.

Speaking to reporters in Canberra on Friday, Mr Morrison urged aged care workers to be vaccinated. “We are leaning heavily into this as leaders of governments and myself as Prime Minister, to see us move towards a mandatory vaccination for aged care workers,” Mr Morrison said.

The government’s primary advisory group of coronavirus experts, the Australian Health Protection Principal Committee released a statement that day advising it does not recommend mandatory coronavirus vaccinations. It said any decision on mandating vaccines should balance individual rights, public health, and unintended consequences such as leaving fewer workers available.

Chris Watt, the federal secretary of the Independent Education Union, which represents teachers at non-government schools, said his union’s membership, like the broader population, included some people opposed to vaccines. “[But] we’d back in what the medical advice is saying from time to time,” he said. His union has also been urging authorities to give teachers higher priority access to vaccines.

Victorian Ambulance Union Danny Hill said most of his members were enthusiastic about vaccination but there was “some hesitancy out there”. Mandating the vaccine, he said, was not the answer because it could create a perception workers were forced to be vaccinated rather than allowing health workers to choose the vaccine and serve as a role model to others.

“If you mandate for all of them to get it, part of the trade it is you will enliven some of those negative views around it,” Mr Hill said.

Queensland has required some of its hospital workers to be vaccinated and other vaccines, such as the flu shot and whooping cough jabs, are commonly required nationally for employees in sectors such as child and aged care.