Fatal attraction: Turtles eat plastic waste because it smells like FOOD thanks to an algae coating that clogs up the animals’ insides

Turtles eat plastic waste in the ocean because it ends up smelling like food thanks to an algae coating — leading to the animals clogging up their insides, a study found.

It had long thought that it was the appearance of polythene debris — which can bear a semblance to jellyfish and seagrass — that made the waste appetising to turtles.

However, US experts found that plastics in the ocean trap microbes and algae — in a phenomenon known as biofouling — which break down releasing a food-like odour.

This leads to what the researchers are calling an ‘olfactory trap’, causing them to ingest pieces of plastic waste that can provide to be fatal. 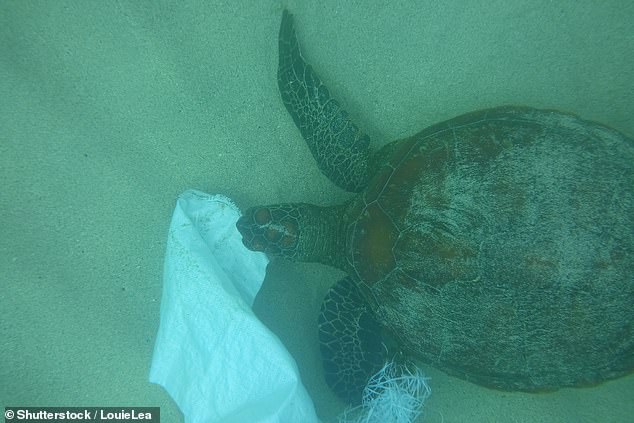 Turtles eat plastic waste in the ocean because it ends up smelling like food thanks to an algae coating — leading to the animals clogging up their insides, a study found

‘It’s common to find loggerhead turtles with their digestive systems fully or partially blocked because they’ve eaten plastic materials,’ said paper author and marine scientist Kenneth Lohmann of the University of North Carolina in the US.

‘There also are increasing reports of sea turtles that have become ill and stranded on the beach due to their ingestion of plastic.’

Dr Lohmann and colleagues studied the behaviour of 15 young loggerhead turtles that had been brought up in captivity — exploring how the creatures reacted to the smell of turtle food, ocean-soaked plastic, clean plastic and water.

The team found that, in the lab setting, the turtles ignored the scents of both water and clean plastic, but displayed foraging behaviours when exposed to the odours of both food and ocean-soaked plastics.

Such foraging behaviours included repeatedly poking their noses out of the water and increasing their searching activities.

‘We found that loggerhead sea turtles respond to odours from biofouled plastics in the same way they respond to food odourants,’ said paper author and biologist Joseph Pfaller of the University of Florida.

This, he added, suggests ‘that turtles may be attracted to plastic debris not only by the way it looks, but by the way it smells.’

‘This “olfactory trap” might help explain why sea turtles ingest and become entangled in plastic so frequently.’

‘The plastic problem in the ocean is more complex than plastic bags that look like jellyfish or the errant straw stuck in a turtle’s nose.’

‘These are important and troubling pieces to the puzzle and all plastics pose dangers to turtles.’

No plastics were consumed during the experiments and the turtles were released into the ocean after the study, the researchers said. 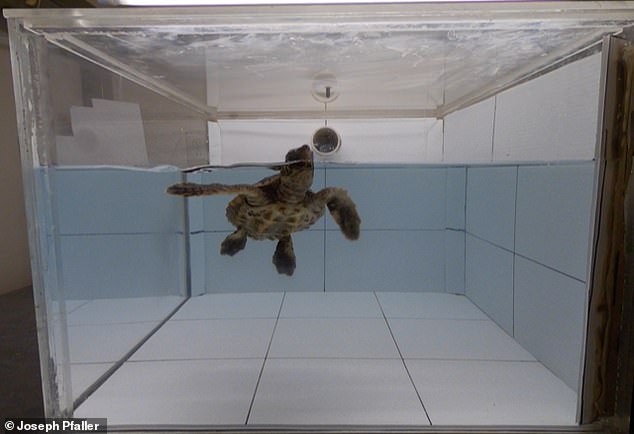 Dr Lohmann and colleagues studied the behaviour of 15 young loggerhead turtles that had been brought up in captivity — exploring how the creatures reacted to the smell of turtle food, ocean-soaked plastic, clean plastic and water. Pictured, a turtle in the study smells the air

The study did not determine the exact nature of the plastic-associated odours that attracted the turtles — but the team believe that dimethyl sulfide, a stinky chemical emitted by algae, could be the culprit.

Further studies will be needed to learn more about the chemicals emitted through biofouling, they added.

However, the team warn that their findings highlight how plastic pollution is putting sea turtles and other marine animals at risk. 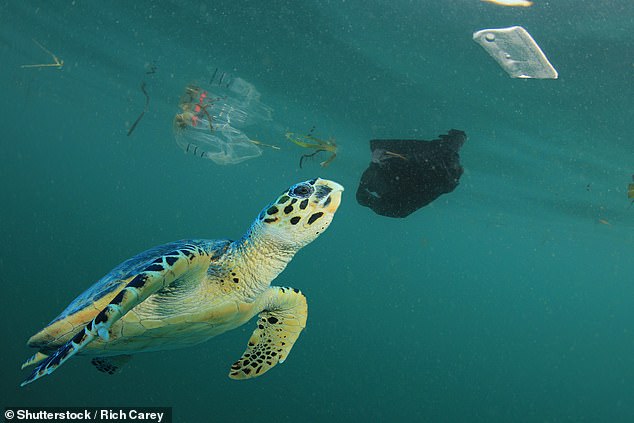 ‘One concern this study raises is that dense concentrations of plastics may make turtles — or other species — think an area is an abundant source of food,’ said biologist Kenneth Lohmann

‘One concern this study raises is that dense concentrations of plastics may make turtles — or other species — think an area is an abundant source of food,’ said Dr Lohmann.

‘These areas may draw in marine mammals, fish and birds because the area smells like a good foraging ground.’

‘Once these plastics are in the ocean, we don’t have a good way to remove them or prevent them from smelling like food.’

‘The best thing we can do is to keep plastic from getting into the ocean at all.’

The full findings of the study were published in the journal Current Biology.

HOW DOES PLASTIC KILL TURTLES?

Sea turtles live in the ocean and feed on vegetation and algae floating in the waters.

Unfortunately, many pieces of litter discarded by humans pollute these waters and resemble food.

The sea turtles mistake them for nutrition and consume them.

This plastic then enters their digestive tract and causes havoc to the animal’s innards.

A study in 2018 found eating a single piece of plastic increases the turtles chance of death.

Researchers found there it caused a one in five chance of death – rising to 50 per cent for 14 pieces.

Turtles have a digestive tract which means they are physically incapable of regurgitation.

Once something has been eaten, it stays in the animal unless it can be defecated.

Once inside the animal, if a piece of plastic covers an organ or blocks a key canal, it can create a fatal blockage.