Up to 150,000 workers are expected to lose their jobs next week as the federal government’s wage subsidy scheme ends amid concerns the $28 billion events industry will struggle to survive without ongoing support.

Treasury secretary Steven Kennedy said the staff most at risk of losing work when JobKeeper finishes on March 28 are those on zero or low hours but the effects would be relatively broad, across both the hard-hit capital cities and regional areas. However, some industries such as the events sector are warning they will face mass business closures when the $90 billion scheme ends. 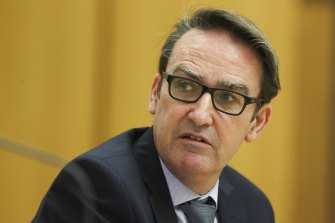 “We are continuing to closely monitor the situation in different sectors and do expect that the end of the JobKeeper program will lead to some businesses closing and jobs being lost,” Dr Kennedy said during Senate estimates on Wednesday. Treasury has forecast about 1.1 million people have been receiving the fortnightly payments over the last three months.

“However, we remain confident that there will continue to be a broad-based recovery in the labour market over 2021, given recent strong employment growth and the decreasing reliance on JobKeeper over recent months.”

The federal government’s latest internet vacancy index, released on Wednesday, suggests some people will pick up work when JobKeeper ends.

There were double-digit increases in South Australia, the ACT, Tasmania and the Northern Territory through the month. Over the past year, advertisements in Western Australia are now higher than pre-virus levels.

NSW and Victoria continue to lag the rest of the country. Ads in NSW have lifted by 18.7 per cent over the year while in Victoria they have climbed by 17.5 per cent.

Determining the overall level of job losses likely to occur next week when the wage subsidy ends has proven difficult. While 110,000 businesses receiving the payment in the March quarter had a drop in turnover of 75 per cent or worse in the last quarter of 2020 compared to the year before, this coincided with the Victorian shutdown and other restrictions that have eased since.

Treasury estimates 100,000 to 150,000 JobKeeper recipients could lose employment when the scheme ends. This will also not necessarily directly translate to a jump in unemployment with some likely to leave the workforce altogether and others to find new roles.

“In our view, it is appropriate for the program to end as other support measures take effect and to allow the economy to continue adjusting,” Dr Kennedy said. One of the new measures introduced is the JobMaker Hiring Credit providing businesses with up to $200 a week for each unemployed young person hired. Out of the $850 million budgeted for the program in 2020-21 about $800,000 has been spent so far and 609 roles created.

While unemployment, which peaked at 7.5 per cent, has fallen to 5.8 per cent some industries are on the verge of collapse.

Tourism has been given extra assistance to keep airlines and related businesses afloat but Save Victorian Events founder Simon Thewlis said 95 per cent of businesses in the state’s event industry relied on the wage subsidy.

At the end of JobKeeper 40 per of event businesses surveyed by the lobby group said they’d need to close and 43 per cent would let staff go.

Nationally, the industry supports up to 179,000 people although it is dominated by Victoria and NSW.

“[I] am puzzled that the event industry hardly gets a mention [regarding] the end of JobKeeper when it is such an iconic industry in Victoria and easily one of the worst affected,” he said.

Shadow Treasurer Jim Chalmers said the pleas of small businesses and workers about the damage caused by the end of JobKeeper had fallen on deaf ears.

“If the Morrison government hadn’t wasted hundreds of millions of dollars on companies which didn’t need JobKeeper, there’d be more room to support those small businesses and workers which still do,” he said. “The Morrison government is rolling out vaccines too slowly and pulling JobKeeper from the economy too quickly. Both of those things will have consequences for jobs.”