Scientists have enabled tiny lab-grown brains to develop rudimentary eye structures that can sense light and communicate with the rest of the brain.

The spherical masses, known as ‘brain organoids,’ are cultivated in a petri dish from stem cells, which can duplicate the function of any other bodily cell.

Researchers at Heinrich-Heine-University’s Institute for Human Genetics in Düsseldorf, Germany used stem cells to grow organoids pairs of ‘optic cups,’ an early stage of eye formation that develops when a fetus is about five weeks old.

The lab-grown brains grew eye-like structures called optic cups that have retinas, corneas and lenses and can ‘see’ light

How were they made?

Until now, optic cups and other 3D retinal structures had not been integrated into brain organoids.

To achieve this, the team modified a protocol they developed for turning induced pluripotent stem cells into neural tissue.

The human brain organoids formed optic cups, which appeared as early as 30 days and matured as visible structures within 50 days.

However, they grow as identical pairs and have some traits of real eyes, including corneas, lenses, and rudimentary retinas, which allows them to ‘see’ light.

They also develop neurons, nerve cells that allow them to communicate with the main ‘brain.’

According to research published in the journal Cell Stem Cell, when the scientists exposed the optic cups to light, they detected electrical signals traveling along their neural pathways, ‘suggesting that some kind of visual information is being transmitted.’

‘In the mammalian brain, nerve fibers of retinal ganglion cells reach out to connect with their brain targets, an aspect that has never before been shown in an in vitro system,’ senior study author Jay Gopalakrishnan, a researcher at the institute, said in a statement.

Eventually, the science could lead to lab-grown retinas to help those with vision loss.

‘Our work highlights the remarkable ability of brain organoids to generate primitive sensory structures that are light sensitive and harbor cell types similar to those found in the body,’ Gopalakrishnan added.

Of the 314 organoids in their study, about three-fourths fully developed optic cups after about 60 days, equivalent to their appearance in human embryos. 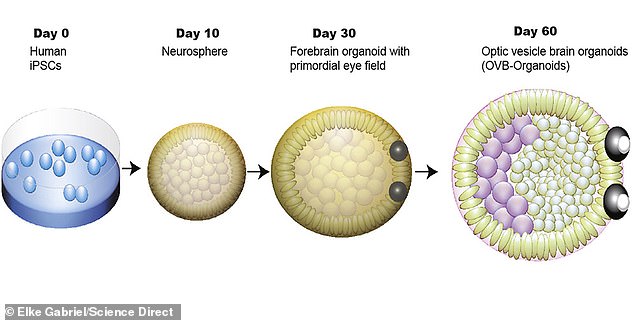 The development of optic cups in brain organoids at the 30-day mark. At full size, the cups are miniscule—0.2 millimeters, or about 0.008 inches, each

Without a blood supply, they begin to dissolve after about two-and-a-half months, New Scientist reported.

In future studies, the team plans to develop strategies to keep the optic cups viable for long time periods, using them to investigate mechanisms that cause retinal disorders.

Stem cells are the body’s raw materials – a basic type of cell that can change into another type of more specialized cell through a process known as differentiation.

Think of stem cells as a fresh ball of clay that can be shaped and morphed into any cell in the body – including bone, muscle, skin and more.

This ability means they have been the focus of lots of medical research in recent decades.

They grow in embryos as embryonic stem cells, helping the rapidly growing infant form the millions of different cell types it needs to build before birth.

The embryonic stem cells used in research come from unused embryos, which result from an in vitro fertilization procedure and are donated to science.

In adults they are used as repair cells, replacing those we lose through damage or ageing.

For adults there are two types: One type comes from fully developed tissues such as the brain, skin, and bone marrow; the other includes pluripotent stem cells.

Pluripotent stem cells have been changed in a lab to be more like embryonic stem cells.