You’d be forgiven for missing the fact this month marked the 50th anniversary of Sir John Gorton’s demise as prime minister.

Wedged between an emotion-charged International Women’s Day, the centenary of Edith Cowan’s election as the first female MP to sit in an Australian parliament and some of the biggest public demonstrations since the Iraq War, the milestone came and went just about unnoticed. 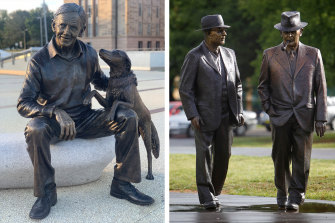 A new statue of Sir John Gorton with his dog has joined other statues in the parliamentary triangle, including one of John Curtin and Ben Chifley.

Except, that is, for a modest gathering of family and friends of the man known as “Jolly John” and a few dignitaries just a stone’s throw from Canberra’s Old Parliament House.

There his sons, Michael and Robin, and his widow, Lady Nancy Gorton, helped unveil a new statue of the man who was elected Liberal leader following the disappearance of Harold Holt. Sir John, depicted by Melbourne sculptor Lis Johnson, sits on a concrete bench outside the public service building which also bears his name. By his side is his loyal kelpie, Suzie Q.

Even the most rusted-on partisan would admit it is a magnificent statue, which portrays a strong sense of humanity befitting of a great Australian. Gorton was a World War II fighter pilot who survived a crash landing on Bintan Island in 1942, and while being evacuated, his ship was torpedoed and sunk by a Japanese submarine. A controversial and progressive Liberal leader, his political mantra was to create a world in which “meanness and poverty, tyranny and hate, have no existence”.

You’d have thought a media release to promote the event might have been issued. It wasn’t.

And here is perhaps why: while no one should take issue with honouring Gorton, the latest addition represents a tired and embarrassing trend.

In fact there are now more statues of kelpies than Indigenous Australians or Australian women in the green spaces surrounding the nation’s seat of power.

It’s why Nola Marino, the assistant minister for regional development and territories, felt the need to say something. In her off-the-cuff remarks at the small gathering, the Liberal frontbencher said she looked forward to many more statues being erected including those of women who have made significant contributions to our nation.

Within Canberra’s parliamentary triangle you can spot Sir Robert Menzies strolling along the north side of Lake Burley Griffin and former Labor prime ministers, John Curtin and Ben Chifley, in conversation as they walk from the Hotel Kurrajong towards Old Parliament House. An addition last year was another former prime minister, Sir John McEwen who served as a transitional leader between Holt and Gorton. Here and there you can also find a king or queen.

Marino thinks Dorothy Tangney and Enid Lyons – as the first two women elected to federal parliament – are befitting of the same recognition. 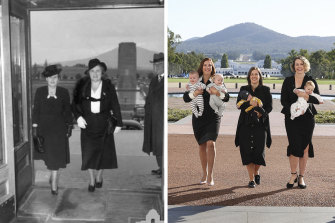 She’d also like to see greater recognition of a non-Australian woman, Marion Mahony Griffin, who was a driving force behind the design of the nation’s capital. Instead, just about everything in Canberra, including the lake, is named after her husband, Walter Burley Griffin.

In a time where militant protesters around the world are tearing down statues, Australia can and should be building more to complete its story.

Why there is no statue recreating the iconic picture of Lyons and Tangney walking through the doors of Parliament in 1943 is a stunning oversight.

This August marks 50 years since Neville Bonner became the first Indigenous Australian to take his place in Parliament. 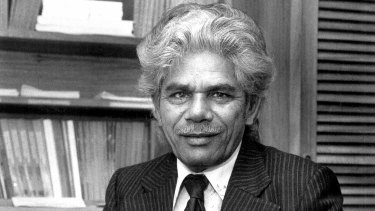 Neville Bonner was the first Indigenous Australian elected to Parliament, fifty years ago this year. Credit:Fairfax

In passionately arguing in favour of constitutional recognition last week, Indigenous leader Noel Pearson described Australia as a nation that “does not recognise its Indigenous peoples”.

“With constitutional recognition soon will come the day when we acknowledge three stories: the ancient Indigenous heritage which is Australia’s foundation, the British institutions built upon it, and the adorning gift of multicultural migration,” Pearson said.

If recognition is not to be continually kicked down the road a statue of Bonner outside Old Parliament House would be a good start. Then when that’s done they can set their sights on Eddie Mabo, and maybe even his wife Bonita, a short walk away at the High Court.

Perhaps near the Department of Prime Minister and Cabinet there’s also room for Charles Perkins, the civil rights activist who became the first Aboriginal Australian to become a permanent head of a federal government department.

What better way to celebrate the progress we have made as a nation?

Too many monuments to Indigenous Australians mark atrocities of the past and it is now time to mark the achievements. The same goes for women.

We don’t need to waste time running focus groups or opinion polls in search of names – they are staring us in the face. Lyons and Tangney, Bonner, Mabo and Perkins. There’s a pretty good start.

Perhaps one day, when the 43rd Parliament is a distant memory, school girls from across the nation will visit Canberra and take a selfie with a bronzed Julia Gillard.

Nobody should argue John Gorton is undeserving of a statue in Canberra. He devoted his life to public service and strived to make Australia a better place.

But if we are going to edge closer towards telling the nation’s full history then there’s a pretty impressive list of candidates to start with. It would be a small but symbolic gesture to show that the government actually gets it.

A BOYFRIEND allegedly bit, beat and squeezed a boy, 2, to death after he became enraged after he urinated on the couch. Alegray Damiah Jones, […]