Environmental activists Insulate Britain are calling a halt to their campaign of disruption until October 25.

So if you want to bowl round the M25 without some goateed git in hi-viz gluing himself to your bonnet, now’s the time.

Some think the hiatus is because the climate protesters are running scared, what with increasingly furious motorists manhandling them off the roads, while the petrol tank of public sympathy is running on empty.

Or perhaps the obvious futility of their actions is finally beginning to dawn? Hardly.

Much as I hate to be the seagull of cynicism once again dumping my guano on to the cliff face of a noble cause, isn’t this pause simply because it is half-term in England around then? 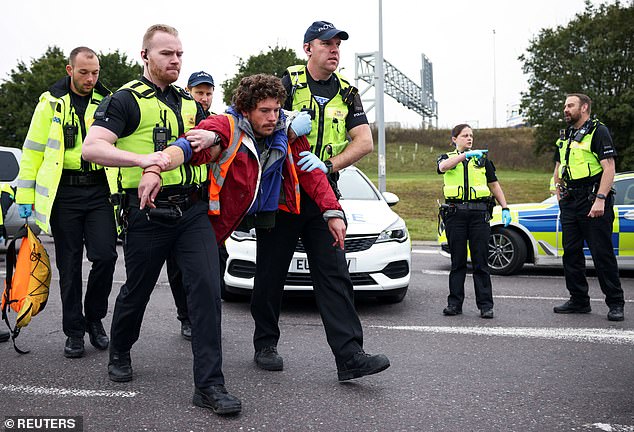 And far more likely that Insulators are laying down their cudgels and tubes of glue to enjoy one last week of sunshine at their gite in the Dordogne or second home in Cornwall? Or perhaps they’ve been roped into babysitting the grandchildren, as per.

Shortly after the lull, IB promise to make themselves known at the United Nations COP26 climate change conference in Glasgow, where one suspects the usual road-blocking hostilities will be resumed.

I’m looking forward to that. If they honestly think Glaswegians are going to put up with their disruptive nonsense for five minutes, then they really are on another planet — one that is beyond saving.

In the meantime, protesting seems to be a game to them, although it is increasingly clear to everyone else that sooner or later, someone is going to get seriously injured or killed.

And it is hard to dismiss the notion that perhaps this is exactly what Insulate Britain want; the terrible wound of martyrdom to lend a sick glory to their cause.

When it comes to this motley band, I try to be reasonable. To consider the views of others, to listen to their arguments. Yet with Insulate Britain and their mother ship, Extinction Rebellion, the red mist soon descends.

Over this last fraught summer, they lost me at hello officer, I’m not budging. They lost me at stopping people from going about their lawful daily business. And then, by refusing to move aside for ambulances or desperate drivers trying to reach sick relatives, they lost any shred of decency that was left.

The actions of these selfish activists are completely unforgivable — but they don’t care whom they upset, so long as they get their smug mugs on television or in the newspapers. 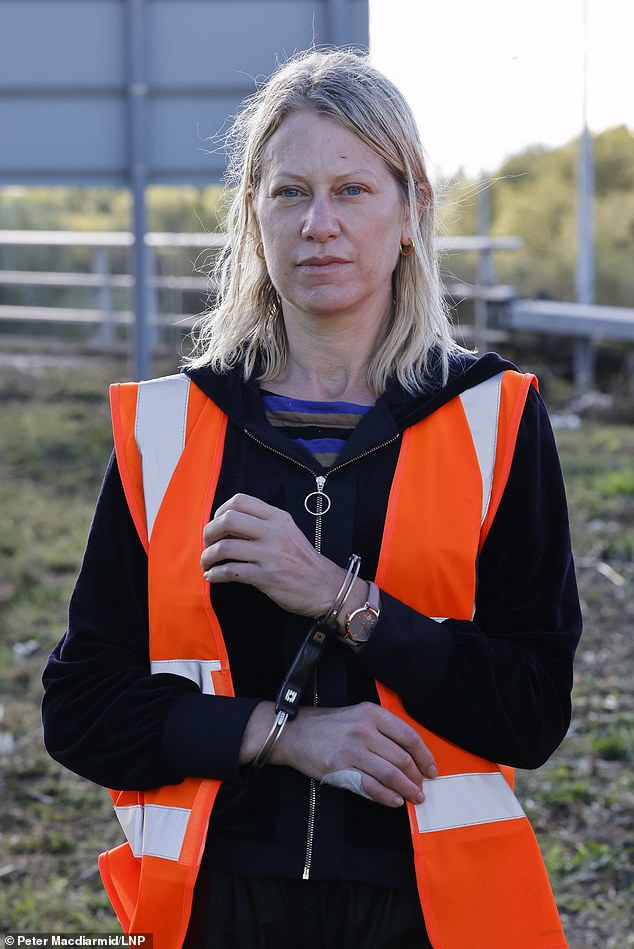 So if you want to bowl round the M25 without some goateed git in hi-viz gluing himself to your bonnet, now’s the time. Pictured: Insulate Britain climate activist Cathy Eastburn

And they are of a certain type, aren’t they? White, middle-class, usually retired. Posh, educated, entitled.

People who have spent much of their lives telling others what to do — from behind a desk to behind a misguided sense of moral superiority. They are the kind of people who worry about the size of your energy bills, but not their own.

Clearly, they don’t empathise with the pressure of having very little money. Or they would understand just how desperately some of those thousands of people stuck on motorways around London needed to make that appointment, hit that deadline, get to work on time.

In their persecution of the working classes, the posh crusties don’t give an organic fig about any of that.

When they were called to arms, these men and women put down their Sudoku puzzles, switched on the Aqua-Magic watering system for the rhododendrons, promised themselves they would use the tumble-drier less, stacked fresh logs for the wood-burning stove, popped another windfall apple pie in the chest freezer and took to the roads around the capital to unleash hell.

Look at them as they glue themselves to the Tarmac, lips pursed in a righteous moue of ethical arrogance, toasty and snug in their quilted Uniqlo jackets and heavily padded saviour complexes.

The protesters enthusiastically staged their 13th roadblock this week, sickeningly triumphant to have evaded meaningful censure or punishment by the Government so far.

They are not frightened by Priti Patel’s threats or by injunctions that could cause havoc with work or family commitments. Why? Because they don’t have any!

To give credence to their actions, Insulate Britain’s scaremongering spokesperson Liam Norton claims that within a decade the fuel crisis will be so catastrophic there will be no food. Not even ice lollies to help us through heatwaves that will ‘not be survivable’. And insulating our homes is going to stop all this?

If loft lagging is so fundamental to the survival of the human race, why hasn’t Norton bothered to insulate his own home? If the planet is in such dire straits, why don’t Insulate Britain do something practical instead of sitting in the middle of the road?

Workshops, education, fundraising for insulation for poorer households? If the sands of time really are running out in the desert of climate despair, why waste a second ornamenting the middle of the motorway like useless garden gnomes?

Don’t just sit there and blame the Government, do something! The whole of humanity is in jeopardy.

Part of the great hypocrisy that bedevils this utter shower is that they indulge in the manipulative use of shame and guilt to try to justify their actions — but absolve themselves from all responsibility.

Somehow, as they once more glue their buttocks on to the fast lane of futility, they propound the myth that everyone else has been degraded by the consumption of energy and first-world privilege, while they alone have grown strong.

I’d dearly like to insulate myself from the annoyances of Insulate Britain, but I fear it is already far, far too late for that.

The actress Michelle Keegan eats custard creams for breakfast, which is grim news for those of us spooning down grapefruit segments or nosebags of sugar-free muesli in a doomed bid for health and beauty benefits.

‘I am a massive, massive foodie,’ says lovely Michelle, who has Tinkerbell-sized hips and the kind of glowing complexion that suggests celery juice and fruit fasts. ‘Food for me is life. And for us northerners, it’s tea and biscuits in the morning.’

Is that really true? No slight on custard creams, which are one of the inexplicable glories of the British teatime table.

That heady mix of cheap fats flavoured with synthetic vanilla, sandwiched between industrially produced biscuit bases? Mmm! No wonder we all love ’em.

Stockport-born Michelle also claims to love crisp sandwiches and chip butties ‘paved with Lurpak’. Now come on. All that and butter, too? That’s really not playing fair. 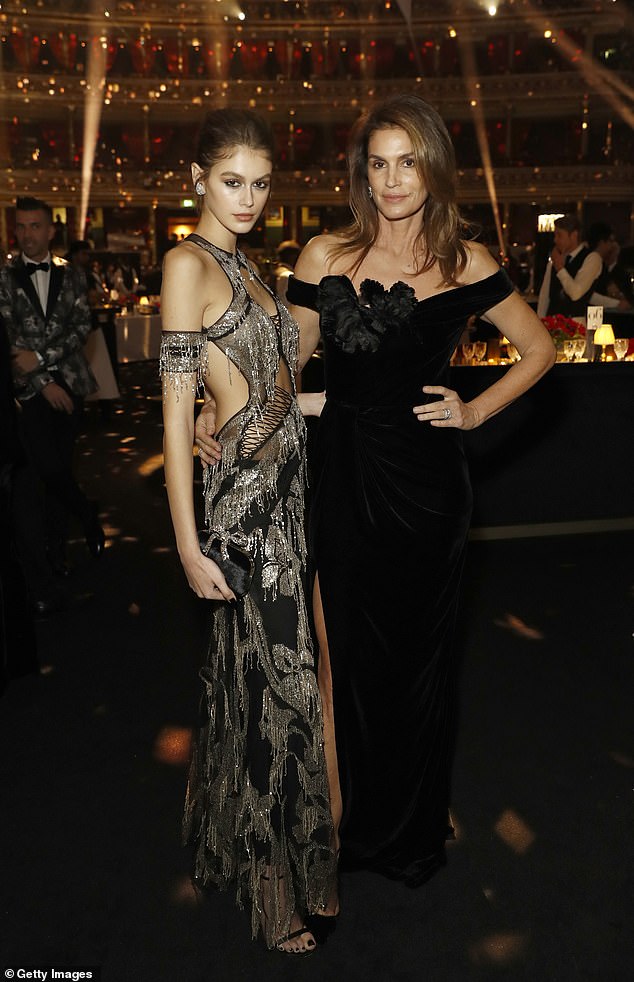 Cindy Crawford says her model daughter, Kaia, is more assured than she was as a teenager

Cindy Crawford says her model daughter, Kaia, is more assured than she was as a teenager.

Excuse me. Lack of confidence? What have these two beauties to fear? Their physical perfection is so astounding, they are like mum and daughter aliens beamed down from Planet Perfect.

But Kaia has earned her mother’s admiration for embarking on an acting career during lockdown.

‘She wasn’t travelling and wasn’t modelling because there were no shoots anywhere,’ said Cindy. So enterprising Kaia took some online acting classes. Now she has roles in two television dramas and an indie film. How far away can Oscar glory be?

Of course, Hollywood can never have enough beautiful young girls to appear in films, but can Kaia actually act?

We will find out soon enough. In the meantime, she isn’t working on a book called Kaia Gerber: My Struggle. Good to know!

Comedian Robert Webb exits Strictly in week three, not quite leaving the positive message he might have hoped for his fellow heart patients.

The Peep Show star, who had open-heart surgery two years ago, made the decision after experiencing symptoms during the gruelling Strictly schedule.

Webb, 49, said he was ‘extremely sorry’ to have to leave, adding: ‘It became clear I had bitten off way more than I could chew for this stage in my recovery.’

One can understand the impulse to quickstep back into the ballroom of life after such a near-death experience, but should he even have been there in the first place?

The comedian and author was found to have a heart murmur caused by a mitral valve prolapse, which showed up only thanks to a routine medical examination. Since then, he has quit smoking and heavy boozing, but Strictly was a step too far.

Now, he says he will concentrate on being an author more than being an actor or a television star. Scant comfort for his dance partner Dianne Buswell, but his health must come first.

Shame on MP who won’t quit 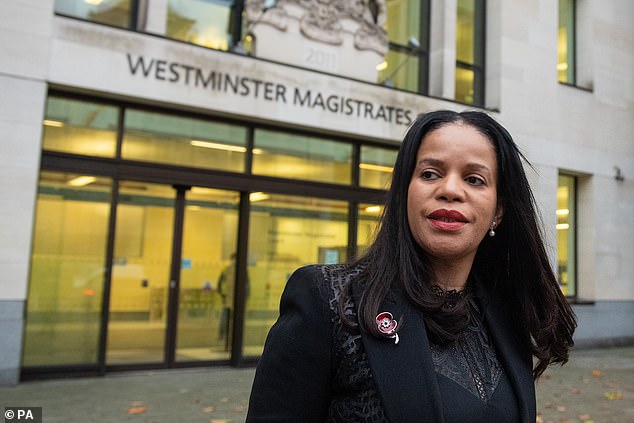 In an episode that brings shame on the whole Labour Party, Leicester East MP Claudia Webbe has been found guilty of harassing and threatening a woman, and will be sentenced next month.

Of course, Miss Webbe alone is responsible for her actions, but both Jeremy Corbyn and Diane Abbott provided character references for her; this elected MP whom the Chief Magistrate described as ‘vague, incoherent and at times illogical . . . and, ultimately, I find her to be untruthful.’

Webbe, 56, threatened to ‘throw acid at’ her partner’s former girlfriend, and also to send naked pictures of her to her family.

Whatever punishment the court decides, surely the very nature of her crimes means she should no longer serve as an MP?

Yet the deluded Webbe says she is going to appeal, and at time of writing has yet to resign. Surely there is no place in Parliament for her?

The Momentum-backed Corbynite should have the decency to stand down, but don’t hold your breath. You have to wonder how a woman like Claudia Webbe could get elected in the first place.

Perhaps this proves the perils of positive vetting — and of stuffing a political party with acolytes instead of talents.

Certainly, Leicester East must be wondering where it all went so wrong. Their previous MP was the scandal-plagued Keith Vaz, last seen offering to buy drugs for male prostitutes. The voters of this constituency deserve better. Much better. 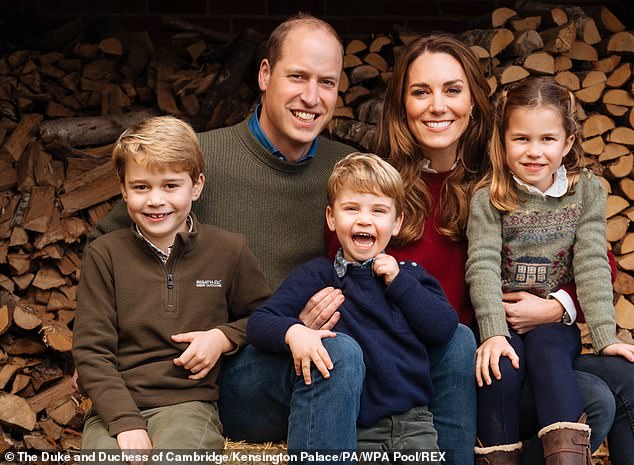 In an interview with BBC Newscast on BBC Sounds, the Duke of Cambridge said his elder son was ‘confused and annoyed’

Is it really such a good idea for Prince William to drag eight-year-old Prince George into the polluted ecosystem of public debate?

In an interview with BBC Newscast on BBC Sounds, the Duke of Cambridge said his elder son was ‘confused and annoyed’ when his class went on a litter pick and returned to the same route the next day, only to find it was full of litter again.

Welcome to the real world, George!

William means well, but he makes his son sound like a pampered little princelet who lives — for random example — in a royal residence in the middle of a 1,000-acre royal estate and hasn’t seen a discarded fast-food wrapper since the last time Uncle Andrew went to Pizza Express in Woking.

Keep Britain tidy — and keep George out of it.