Home » Lifestyle » The race is on, but use sanitiser and sneeze into your elbow

The start of every Formula One season throws up questions; who is fast, who can finish, who will struggle to keep pace? At this week’s Australian Grand Prix, a more mundane query will be front of mind; have you washed your hands?

Wash your hands, wash them well. If you can’t get to a sink, use a sanitiser. And if you are going to sneeze or cough, do it into your elbow. 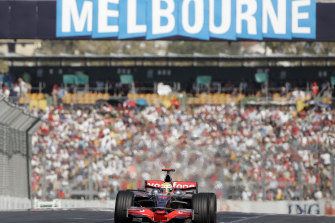 This year’s grand prix is going ahead, despite coronavirus fears.Credit:Rob Griffiths

Across four days at Albert Park, more than 300,000 people are expected to gather for the largest sporting event scheduled in Australia since the coronavirus broke out of Hubei province.

It was only three days ago, when the federal government’s national security committee decided not to expand travel restrictions to Italy, the home of two Formula One teams, that race organisers learned their event would go ahead.

The challenge now is how to keep racegoers healthy and make them feel safe as they cram into busy trams, line up in queues and share grandstands and corporate boxes around the Albert Park circuit.

The response will be seen in the form of hand washing stands and sanitiser stations prominently located around the park and public health messages urging people to make good use of them.

Behind the scenes, the same message will be drummed into staff in food preparation and serving areas while cleaning staff will disinfect toilets and washrooms more regularly than they normally would.

In the event control room, health officials will monitor the circuit alongside police and event managers. In the onsite medical centre, infectious diseases experts and an isolation unit will be on standby for any patrons who develop symptoms during the event.

He says the Australian Grand Prix, sandwiched between the Moomba festival and the start of the football season, is a chance to demonstrate that mass gatherings in Australian can safely go ahead amid a coronavirus pandemic, so long as organisers and patrons take sensible precautions.

“I’d never belittle how serious this virus is but I want to make sure that we all adopt an optimistic attitude rather than going into our houses, closing our doors and never coming out again,’’ Mr Westacott said.

AGPC general manager of operations Amy Hill says the advice from Victoria’s senior health officials is for people to stay away from the track if they feel unwell, to seek medical advice if they become ill, to wash their hands and to keep their distance from anyone who looks sick.

“If you do cough or sneeze, it is such a fast way to spread germs and that is what we are trying to avoid here,’’ she said. “That is probably the most important message in addition to the washing of hands. Sneeze into your elbow, not into your hands.”

Extra washrooms have been added to the Albert Park circuit and pump packs of hand sanitiser will be ubiquitous; in all washroom and toilet facilities, information huts, first aid stations, ticket counters, corporate facilities and entrance points to the precinct.

Big screens and ground announcements will carry a basic health message encouraging people to keep their hands clean and monitor their own health.

Australian Grand Prix Corporation chairman Paul Little said he was confident event organisers had “done as much as we can possibly do to cover off every contingency''.

As late as Thursday, when Cabinet’s national security committee met to consider additional response measures to the coronavirus outbreaks in South Korea and Italy, it was uncertain whether the lights would flash green at Albert Park.

A decision to close Australian borders to visitors from Italy, where more than 4000 cases and nearly 200 deaths have been confirmed, would have blocked Ferrari and Alpha Tauri from taking their place on the starting grid. Most likely, this would have prompted Formula One management to cancel the race.

Beyond the Australian Grand Prix Corporation, which has already incurred most of an estimated, $120 million cost to stage the event, any decision to abandon the race would have carried serious financial implications for the Victorian government, which forks out about $60 million a year to run the race, and Liberty Media, the publicly-listed company which owns Formula One.

Liberty Media, chaired by former Newscorp director Chase Carey, has already seen 27 per cent of its value wiped off the NASDAQ exchange by the COVID-19 outbreak, which forced the cancellation of next month’s Chinese Grand Prix in Shanghai.

Despite the extent of these interests and those of the individual teams, sponsors and local suppliers, senior government sources said commercial considerations had no bearing on the decision to allow people to enter Australia from Italy subject to “enhanced screening measures” upon arrival by Border Force staff.

The recommendation to government by Australia’s chief medical officer Brendan Murphy was that enhanced screening, rather than blanket travel restrictions, was sufficient to mitigate the risk of contagion from both South Korea and Italy.

It was only after Border Force raised concerns about their capacity to screen all travellers from South Korea that government opted for a blanket ban on South Korea only.