Home » Lifestyle » The emptiness behind the mask: Sean Kelly’s life of the PM

Questions of truth and game-playing underpin Sean Kelly’s excellent biography of Scott Morrison. “We have beaches; we have good weather; we have abundant resources,” Kelly writes. This, of course, is not true for everyone in Australia; but it is certainly true for the only part Morrison has ever cared to represent.

Who then is this avatar of relaxed and comfortable Australia? The little boy with his traumatic sporting trophies (“I stopped these”)? The man, celebrating invasion on January 26, who says: “You don’t pretend your birthday was on a different day”? Or simply the fixer who told Nick Xenophon, “No mate. I’m purely transactional”? 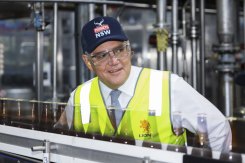 The distinction between Scott Morrison and Bob Hawke is that Hawke was both genuine larrikin and genuine Rhodes Scholar. Credit:Brook Mitchell

Kelly’s portrait is of a man who is all these things: by turns childish, condescending, and disrespectful to a fault. Kelly, a columnist for The Age and The Sydney Morning Herald, diagnoses Morrison’s “thoughts and prayers” approach to policy as one in which no one makes decisions because Morrison has allowed bureaucratic roles and higher powers to assume responsibility. (Even colonisation is passive, an “inevitable clash of cultures” in which “shared ignorance”, as Kelly notes of Morrison’s worldview, means any blame “lay equally with Indigenous people”.) We are presented with a leader for whom politics is a game of seeking to memorialise your own suffering – everyone else’s be damned.

Except this is what he wants, isn’t it? That’s his game, to want to be wanted: look at him whipping up a storm with Annabel Crabb on TV. Easygoing enough to cook up his “ScoMosas”, but not easygoing enough to review policies that are torturing asylum seekers.

Kelly is a close reader of politics, able to treat Canberra’s vagaries as contact sport: you need to get up close, he seems to say, see how the game’s played. It’s not every day a political journo brings gender theorist Eve Sedgwick and novelist Kazuo Ishiguro into the mix, but that’s what Kelly does, and he does it well.

What this yields is the kind of close reading politics demands; or, as Kelly puts it, marvelling at Morrison’s go-to brushstrokes (curries once a week, a bit of rugby league here and there): “So few details, but such talkative details!” Interestingly, Kelly suggests that many of these details may have been more readily apparent to women, citing the “piercing critiques” of journalists such as Katharine Murphy, Samantha Maiden and Jane Cadzow.

Kelly’s close reading also yields some of this biography’s delicious detail: Morrison playing the Artful Dodger in a school play; his appearances in photo shoots and TV ads as a boy; the brutal asides about meeting his wife, Jenny, at a Christian youth camp (“Morrison took Jenny’s number; he promised to call but never did”); the failed political career in New Zealand, “a cross between Rasputin and Crocodile Dundee”; his tawdry stint as head of Tourism Australia (“Morrison had been paid $300,000 a year to do the job; he was reportedly paid more to leave”); and the local party members “who still vote informally at elections because they cannot bring themselves to vote for Morrison”.

My early feeling was that Kelly’s talents for analysis – to say nothing of his style – were wasted on a figure as cold and anonymous as Morrison. It’s something Kelly himself wondered. But consider: who is Kelly presenting to us? If there is only emptiness behind the mask – an emptiness Morrison has spent so long cultivating he cannot afford, now, to give it up – what does this say about us?

Recalling that great Liberal pastime, working-class cosplay, there is a sense of politics having become, finally, nothing but performance – images and empty languages invoking battlers and “heartlands”. We have grown increasingly affluent but continue to pursue a cartoonish parody of Ockerdom, even when so much of it rings false. The distinction between Morrison and a figure such as, say, Hawke, is that Hawke was both genuine larrikin and genuine Rhodes Scholar. It’s the combination many would want in a leader: approachability plus actual ability. The only thing Morrison has a talent for is stalling and deflection. But this is a style that suits our social-media age: all tease, image and fan service.

“A reminder that politics is not a game,” Kelly writes, “is not only discomfiting but condemning, pointing out that we have been acting trivially – living trivial lives, as trivial people – all this time.” Morrison has a frightening aptitude to channel these energies into insincere populism, or what Kelly calls “extreme contrivance”: “an odd combination of humour, football and refugee policy”. Yet unlike his hero, Howard, Morrison is not so much “for all of us” as for the chosen few, happy to lead the country like a game show in which only some can win.

The Booklist is a weekly newsletter for book lovers from books editor Jason Steger. Get it delivered every Friday.