Across generations and cultures, millions of viewers have been moved by the blend of grand romance and everyday realism that defines David Lean’s 1945 drama Brief Encounter, with Celia Johnson and Trevor Howard as a pair of respectable middle-class Brits, both married to other people, who fall desperately in love but ultimately choose not to stray. 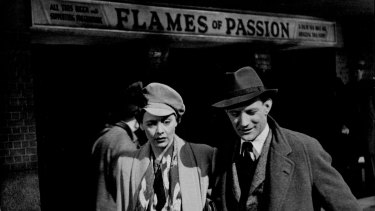 Celia Johnson and Trevor Howard emerge from an afternoon at the cinema in Brief Encounter.Credit:

It would be hard to find a more devoted Brief Encounter fan than Australian critic and scholar Brian McFarlane, who a few years ago described the film — adapted by Lean and others from Noel Coward’s 1936 one-act play Still Life — as an expression of values that ‘‘don’t date’’.
McFarlane’s new book, The Never-Ending Brief Encounter, sets out to prove the point. This is not another study of Lean’s film, but a catalogue of the citations and echoes of it that have proliferated ever since — testifying to its ongoing cultural currency, and suggesting that while social mores may change, the theme of conflict between passion and duty has never ceased to resonate.

The list takes in direct remakes such as a bizarrely ill-conceived 1974 telemovie with Richard Burton and Sophia Loren, and parodies such as a 1958 ad for General Electric fridges with Mike Nichols and Elaine May (McFarlane seems to have missed a similar Nichols and May skit that takes place in a dentist’s office, included the same year on their album Improvisations to Music). Other inclusions merely allude to Brief Encounter in passing, or share its broad themes, whether as a result of direct influence or not.

There’s a slightly obsessive, trainspotting aspect to all this — which is possibly apt enough, considering that the film’s main setting is a railway station cafe where the trains that arrive and depart are almost characters in their own right. Indeed, McFarlane devotes much of a chapter to detailing how various real-life British railway stations have sought to cash in on the Brief Encounter connection, documenting this with photographs of signs and memorabilia.

Other passages in this likeably quirky book suggest that a significant part of the research process involved typing the phrase ‘‘brief encounter’’ into internet search engines and seeing what popped up. Perhaps in the future, the book itself could be usefully reincarnated as a website, to be updated with new Brief Encounter connections as they came to light. 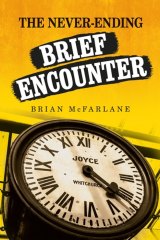 As I read, I too, began to free-associate, assembling my own list of examples of the ‘‘brief encounter’’ motif. The 1960s and ’70s ‘‘moral tales’’ of Eric Rohmer appear to fit the bill, as do a couple of especially emotional episodes of The Simpsons. In Australian cinema, there’s John Duigan’s 1982 Winter of our Dreams, where the railway station is replaced by a Sydney ferry terminal and the hero (Bryan Brown) is in an open marriage, which doesn’t entirely simplify matters when he falls for a young drug addict (Judy Davis).

Granting that the story of Brief Encounter is an archetypal one, some aspects of the book’s argument remain open to question: while Lean’s characters may submit to duty, McFarlane’s own passion for his subject appears, ironically, all but unrestrained. At times he clearly overplays his hand, especially when arguing that the film’s place in collective memory is not only prominent but uniquely so. Other films may linger on, he grudgingly allows — but ‘‘I rather doubt if any have kept cropping up in such an eclectic range of circumstances’’.

For all the supporting evidence McFarlane has assembled, there’s a degree of special pleading in this claim: still, it got me thinking. Mulling over the films that have endured as equally widespread cultural reference points, I was struck by how many of them evoke the same kind of conflict between an idealised dream and the mundane realm of obligation that awaits us outside the movie theatre.

There’s Casablanca, which McFarlane mentions as a relevant comparison (‘‘The problems of three little people don’t amount to a hill of beans in this crazy world’’). There’s It’s a Wonderful Life, where the hero (James Stewart) must abandon his grand ambitions in order to help his town survive the Depression. And there’s another film, as perennially popular as they come, and deservedly so. How could McFarlane — how could anybody — overlook The Wizard of Oz?