A small red swastika on the back window of a dusty Nissan Patrol has reignited a long-running campaign to ban the Nazi symbol in Victoria.

Anti-Defamation Commission chair Dvir Abramovich said the picture of the controversial symbol was taken by a distressed man at a McDonald’s drive-through in the Bendigo suburb of California Gully on Saturday, April 17 – and, sadly, it wasn’t an unusual sight in his office. 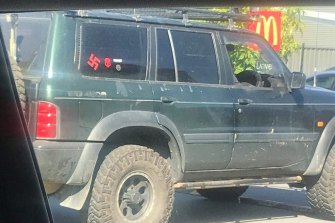 The picture was taken on Saturday, April 17, in California Gully, Bendigo.

“We receive pictures like this on a daily basis. For some people, [the Nazi symbol] is as threatening as being confronted with a gun,” Dr Abramovich said.

“What does it say that in 2021, individuals with pure hatred in their heart, feel emboldened to proudly display a symbol that represents the pure evil that led to the death squads, gas chambers and the extermination of 6 million Jews … and millions of others?”

After a year-long investigation, a cross-party parliamentary inquiry into anti-vilification laws recommended the Andrews government make the Nazi swastika a criminal offence in Victoria, making it the first jurisdiction in Australia to impose such a ban.

The report was tabled in State Parliament in early March. Premier Daniel Andrews had previously said the government would not act until the final report was handed down. But more than seven weeks later, the government is yet to commit to the ban. The state government has been contacted for comment.

Dr Abramovich, who has spent years campaigning for a ban on the swastika, said there was no excuse for the government’s lack of action.

“Now is the time to act and to send the unmistakable message that Nazism has no place in Australia,” he said. “[The Victorian government] could do this quickly. It is an issue that has been simmering for years now. It wouldn’t even be a debate because the Libs and the Nats have publicly said, ‘We will support this’.”

The state Liberal opposition, along with Jewish and anti-racism groups, called for a ban on the use of the swastika early last year after the government was powerless to stop a Nazi flag flying above a home in regional Victoria.

Mr Andrews also said state laws were inadequate when the government found it did not have the powers to cancel a planned neo-Nazi music festival in 2019.

Incidents involving neo-Nazis have made headlines over the past year. Over the Australia Day weekend, dozens of members of the far-right National Socialist Network burnt a cross – a ritual usually associated with the Ku Klux Klan – next to Lake Bellfield at the foot of the Grampians in western Victoria.

Thomas Sewell, a former Australian Defence Force member who is part of the network, allegedly attacked a security guard outside the offices of The Age and Channel Nine’s A Current Affair hours before the TV program aired a segment on Mr Sewell’s right-wing group. Mr Sewell was bailed to appear at Melbourne Magistrates Court on July 27.