Scientists have now identified how the massive ‘Godzilla’ dust storm that traveled from Saharan Africa across the Atlantic Ocean and into the US last year actually managed to traverse the globe.

Researchers from the University of Kansas (KU) found the giant dust storm passed through three different jet systems as moved over the Caribbean and American Gulf States.

Using satellite data to follow the plumes’ path, the team concluded the African easterly jet carried it to the Atlantic where it was handed off to the North Atlantic Subtropical High, which then transported it towards the Caribbean region.

‘Once the dust reaches the Caribbean region, the Caribbean low-level jet — that’s another system — along with the subtropical high can further transport the dust from Caribbean region towards the State,’ said the study’s lead author, Bing Pu, assistant professor of geography & atmospheric sciences at KU, in a statement.

Scroll down for videos 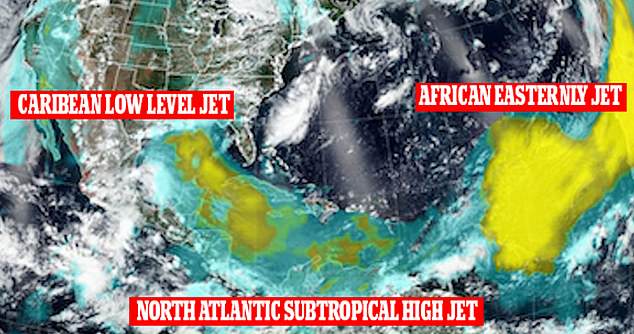 A massive dust plume, nicknamed ‘Godzilla,’ traveled from Saharan Africa across the Atlantic and into the US last year. It was carried by the African easterly jet North Atlantic Subtropical High Caribbean low-level jet

The record-breaking trans-Atlantic African dust formed on June 14 and reigned terror on the Atlantic until June 28.

The enormous plume was created by strong winds sweeping tiny sand and mineral particles off the surface of the Sahara, but experts say the phenomenon is a normal occurrence this time of year.

According to NOAA’s Atlantic Oceanographic and Meteorological Laboratory, the dust plume was somewhere between 60 to 70 percent heavier than average, making it the dustiest event since records began around 20 years ago.

Scientists at KU were intrigued by ‘Godzilla’ and set out to uncover the mechanics behind it, according to the study published in the Bulletin of the American Meteorological Society. 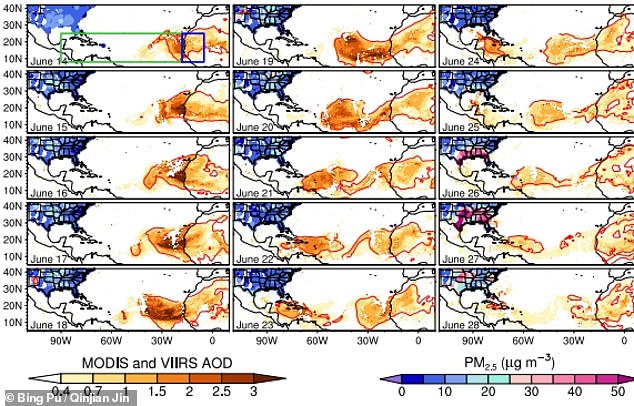 The record-breaking trans-Atlantic African dust formed on June 14 and reigned terror on the Atlantic until June 28. This graphic whos the development of the dust plume as it left Africa and headed toward the US 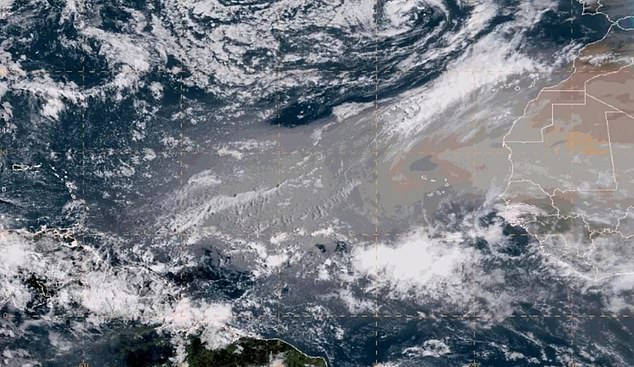 According to NOAA’s Atlantic Oceanographic and Meteorological Laboratory, the dust plume was somewhere between 60 to 70 percent dustier than average, making it the dustiest event since records began around 20 years ago

Pu and co-author Qinjian Jin, lecturer and academic program associate with KU’s Department of Geography & Atmospheric Science, reconstructed the path of the dust storm using satellite data from 2020 and combined it with readings from air quality stations to see the cloud’s path.

All of the information was analyzed by a computer to see how the dust plume passed between jet stream-systems as it crept toward the Caribbean and US.

‘News reports mentioned the visibility of the airport in San Juan, Puerto Rico, was reduced down to five miles, which is really low,’ Pu added.

‘Visibility in the U.S. Virgin Islands was down to three miles, so it can affect public transport. There are environmental impacts as well. Dust can affect circulation and precipitation — they can modify climate as well, when there’s a large amount.’

Although ‘Godzilla’ put on a show for the world, the tiny particles that comprised the cloud threatened the health of those in the Americas.

‘Small particles, especially those with diameter less than 2.5 micrometers, can easily be taken into the human breathing system and cause respiratory diseases,’ Pu explained.

‘Some studies have linked this back to lung cancer as well. There’s also a study finding that the dust storm has been associated with increased nonaccidental and cardiovascular mortality in the United States. 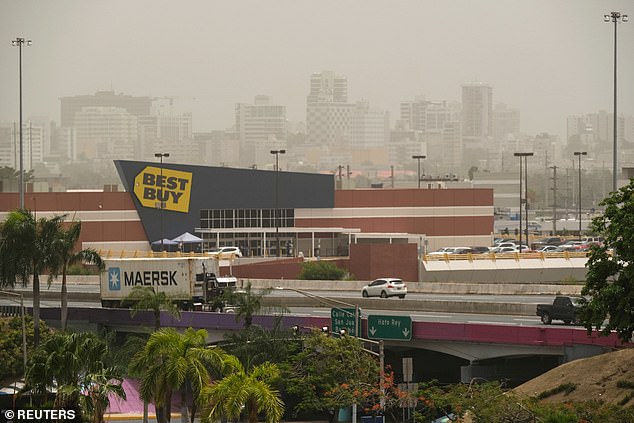 There was poor visibility in many countries, including Puerto Rico (pictured) when the dust cloud swept across the Atlantic from Africa. Although ‘Godzilla’ put a show on for the world, who was captivated by its movement, the tiny particles threated the health of those in the Americas

‘Also, there are dust-dwelling fungi which may cause a disease called Valley fever that happens in Arizona and California and has been related to dust storms in those regions.’

Pu said hotter, drier weather and reduced vegetation in Africa could produce more airborne dust. Yet, these emissions are hard to forecast.

‘There are some observations showing there is reduced precipitation in West Africa over the 20th century, which indicate drying there would have more dust emissions,’ she said. ‘But model results don’t give a conclusion about whether dust will increase or decrease in the future. Some papers find that there would be decreased dust emissions. Our previous study found that there might be an increase in southern Sahara region in the summertime.’

Furthermore, according to Pu, the cooperation of jet systems needed to transport the dust across the ocean is even less predictable.

‘Even if you have enhanced or decreased emission, if there aren’t favorable conditions for dust to be transported, then its impact on this downwind region will be harder to quantify,’ she said.

‘In addition to understanding the emission process in the dust-source regions, we also need to look at circulation variations that help us better project this long-range transport of dust as well as its environmental and climate impacts in the US.

‘Other regions can be affected as well because African dust can be transported to South America and also Europe and the Mediterranean region.’