Streaming services such as Netflix, Stan and Disney+ should be forced to spend at least 20 per cent of their local revenue on new Australian drama, documentaries and children’s programs, a major new federal parliament report on the country’s creative industries recommends. 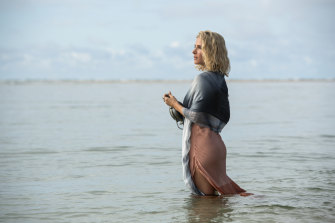 Netflix launched in Australia in 2015, and released its first Australian original series Tidelands in 2018.Credit:Netflix

“For the only art truly unique to this country, this deserves consideration and greater recognition,” the report said.

The long-awaited bipartisan report from a parliamentary committee, looking at the state of the creative industries and aiming to hammer out a way forward, comes after the committee heard heartfelt pleas from industry leaders, performers, artists and writers for stronger support for their struggling sector, especially after it was smashed by the pandemic.

It pointed out not only the cultural and economic benefits of the arts, but also their role in knitting communities together and supporting the mental health and wellbeing of many Australians – particularly vital since the onset of COVID-19, the committee said.

“The act of creating something artistic, whether it is a painting, comedy performance, novel, play, or piece of music, is intrinsically good for people,” the report said. “Australia’s cultural identity evolves as creative workers continue to represent Australian life and tell Australian stories.”

It recommended that the school curriculum include a new minimum threshold of books by Australian authors, and schools needed a new “music access assistance program” to help more students learn an instrument. And it said the government needed a new “national cultural plan” to address the medium and long-term needs of the sector.

It also said the word “arts” should be restored to the title of its government department – it is currently buried within the Department of Infrastructure, Transport, Regional Development and Communications.

Committee member Josh Burns MP said it was “significant and symbolic” that the word was missing, and Australia needed “a re-established, named department of the arts to give it the proper significance that it deserves”.

The COVID-19 pandemic had “brought into sharp focus the important role that creative content has in our everyday lives,” the report said. “Australians have increasingly relied on the arts during periods of self-isolation and lockdowns,” it said, with subscription rates for streaming services up by more than 45 per cent.

The committee’s recommendation for an Australian content requirement on streaming services, set at 20 per cent of their Australian revenue, makes it the most stringent demand for regulation of such services yet to come out of Parliament House.

Previous inquiries and reports have called for a levy of 10 per cent. Only industry lobby group Screen Producers Australia has publicly backed a 20 per cent spend.

When the federal government released its reform package last September there was no obligation on the streamers other than the requirement to self-report their spend for two years from January 2021.

The call for a 20 per cent levy on local revenue is in line with the demands streamers face in other territories such as Canada and Europe.

A spokesperson for arts minister Paul Fletcher said, “The government thanks the committee for its work and will consider the report in the usual way.”

TV, movies, Find out the next TV, streaming series and movies to add to your must-sees. Get The Watchlist delivered every Thursday.