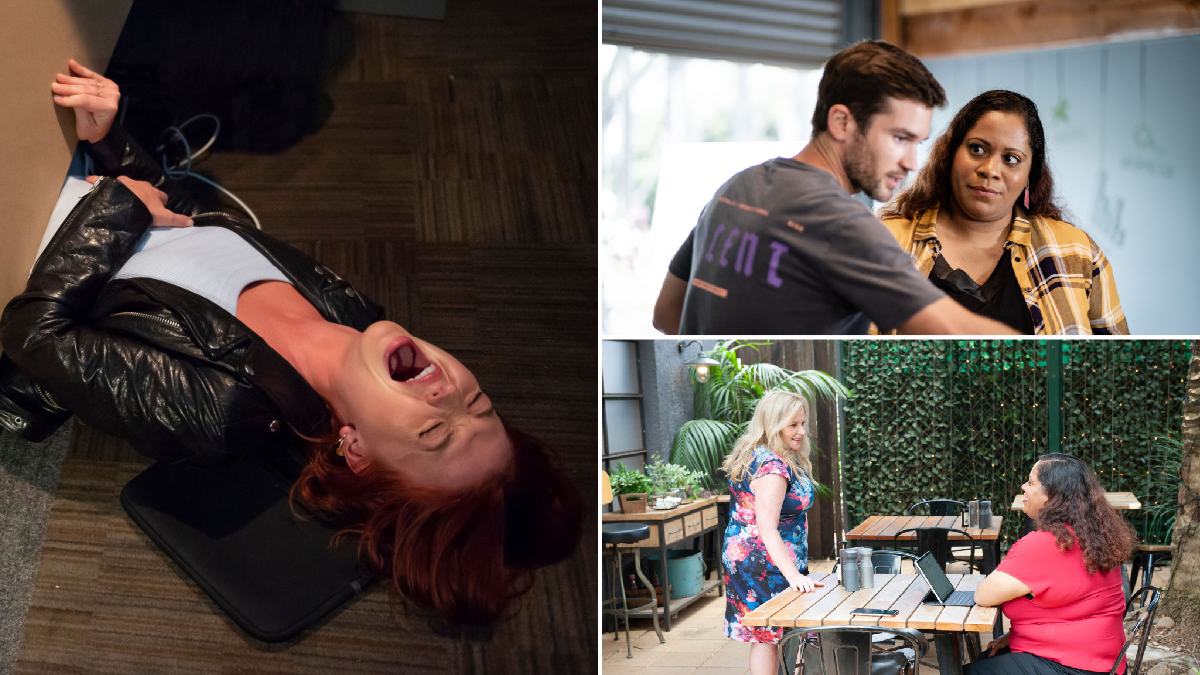 It’s a dramatic week in Ramsay Street as one of the Neighbours fights for survival, another comes under threat from a stalker, and another battles with their conscience.

But who will be the winners?

Nicolette’s (Charlotte Chimes) life hangs by a thread after she gets caught up in a burglary gone wrong. Will she and her baby be the casualties of the crime?

It’s Brent’s (Texas Watterson) fault Nicolette is there in the first place – he set up the burglary. Will he confess while Nicolette fights for her life?

Ned (Ben Hall) seems to attract the unhinged – he barely survived the Scarlett ordeal, but could he be about to go through it all again? Quite possibly, judging by the discovery Bea (Bonnie Anderson) makes about the new Sheila C (Shareena Clanton). Ned should start sleeping with one eye open, again.

Elsewhere, Hendrix (Benny Turland) and Mackenzie (Georgie Stone) are dealing with the fallout from their almost kiss. It’s awkward, oh it’s so awkward, but is their friendship ruined or is there a little spark igniting here?

And the mystery new Sheila seems to be getting her feet under the table with Sheila Canning (Colette Mann). What’s she up to?

There is something about Ned apparently. The aftereffects of Scarlett’s damaging time in Erinsborough are still etched into Ned’s consciousness, but could he be about to experience round two when Bea makes a startling discovery. When the new Sheila C rocks up in town she brings with her an air of mystery, there’s something about her no one can put their fingers on. She asks for art lessons from Ned, who happily obliges, and Bea notices there seem to be some sparks there.

Bea is curious, and when Sheila C brings her car in for a service, it seems like the perfect time to snoop. While rifling through the car, Bea discovers a file on the back seat – and it has Ned’s name on. Unable to control herself she flips the cover and has a good read – the file is bulging with a comprehensive dossier all about Ned, including his Fandangle pics. Is Ned walking into a new horror show?

Nicolette has a strong sense Brent is up to something, so when Emmett sneaks out for some reason, she decides to follow him. Little does she know it could be the last thing she does, as she follows him right to the burglary taking place at the Hive. Nic accidentally gets herself caught up in it and when it all goes Pete Tong, she finds herself being crushed under a heavy piece of furniture. She calls for help but no one can hear her and as her injuries become more serious, she loses consciousness. Emmett thinks he’s saved his brother from the situation and feels relieved, that is until word gets back to them that Nicolette has been found in a terrible state and now they’re freaking out. Could they be responsible for Nic and her baby’s deaths?

Harlow blames Paul for Brent’s decision to get involved in Holden’s burglary plan, but Paul absolutely refuses to accept any wrongdoing. Harlow is furious. That, coupled with blind fear for Brent and what will happen to him now, she takes it out on Paul and decides it’s time for her to leave no. 30.

After Mackenzie and Hendrix’s almost kiss, thing are seriously awkward. Initially, they don’t talk about because they’re both so embarrassed, but when Mack backs out of some plans, Hendrix realises he’s in danger of losing a really close friend and has to act. But he also starts to question why he’s so bothered that she’s cancelled one plan. The thought of what it could mean truly scares him so he goes out of his way to make it clear it’s only friendship, but in doing so, massively puts his foot in it and risks ruining everything.

Emmett tries to convince everyone that it was him behind the burglary. But while his actions might have noble intentions, no one is stupid. David, for one, doesn’t believe for one second that Emmett committed the crime and gently tries to encourage Brent to come forward, for the sake of his brother if nothing else. Brent isn’t heartless, he knows he can’t let his little brother take the rap. But can he bring himself to confess?

Bea might have huge suspicions about Sheila C, but Original Sheila sees nothing wrong with her new friend. Sheila C is visiting for lunch and Sheila works herself into a tizzy trying to do something impressive. But when Sheila C confesses she just wants an informal get together, the two relax. Before they know it, they find themselves bonding over family and it seems like a beautiful friendship is starting.

Scenes air from Monday 10th May on Channel 5.