Dr Paul O’Connor, a researcher at the University of Exeter, has interviewed skateboarders at home and abroad and analysed media articles for his new study.

He found that, aside from the beneficial physical benefits, taking part in skateboarding alleviates mental health issues and gives ‘profound meaning and resonance’ in a spiritual sense.

Skateboarding gives middle aged people – those between the ages of 40 and 60 – ‘access to a community’ and ‘an identity separate from other parts of their lives’.

Popularity of this lifestyle sport is increasing since the first Covid-19 lockdown, thanks in part to its new status as an Olympic sport since last year.

Skateboarding made its Olympic debut at the 2020 Olympic Games in Tokyo, which went ahead last year after being delayed by 12 months because of the pandemic.

Sky Brown, the world’s youngest professional skateboarder at 13, became Team GB’s youngest Olympic medallist ever when she won a skateboarding bronze in Tokyo. 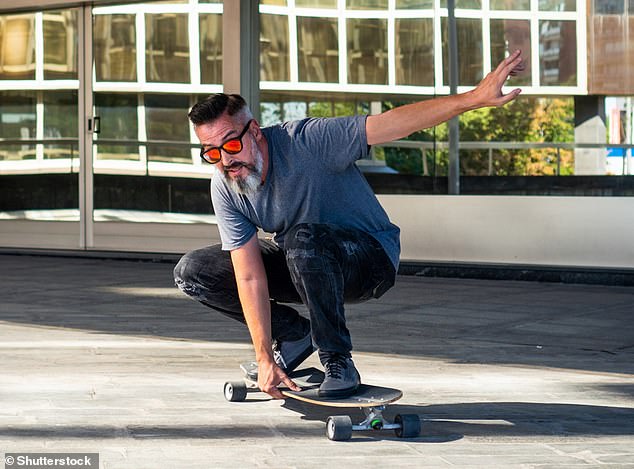 Skateboarding in middle age helps people navigate depression, bond with their children and cope with personal trials, according to a University of Exeter academic (stock image)

Skateboarding across the UK has seen a resurgence since the Covid-19 pandemic, according to governing body Skateboard GB.

MySkate, an app which provides skateboarders with the locations of all the skateparks, in the UK has seen an increase of 180,000 uses of the app each month, with new and experienced skaters logging on to find their local place to skate.

New and re-engaged skaters have been jumping on boards and hitting the streets, marking the biggest increase since the Tony Hawk Pro Skater game caused a boom in 2000.

The growth in skateboarding has emerged as an unlikely outcome from the Covid lockdown, with its perfect match with quarantine restrictions.

It’s not just young-male skateboarders causing the spike – big increases have been in females, couples skateboarding together and older generations who used to skate in their youth, either alone or with offspring.

Read more: The unlikely boom of skateboarding during a pandemic

One reason behind the sport’s sudden popularity could be because the measure of success in skateboarding is ‘more fluid’ compared to other sports, and failure is seen as part of the activity, experts say.

For his analysis, Dr O’Connor carried out 30 interviews with middle-aged skateboarders, mostly in the US and Canada, and observed skateboarding in Hong Kong and the UK.

‘For those I spoke to skateboarding was more than about looking after physical health,’ he said.

‘On at least two occasions when I asked informants to try to explain what skateboarding meant to them, I was confronted with grown men fighting back tears, literally lost for words in grasping to communicate the importance and gravitas of their pastime.’

Dr O’Connor, who has a personal interest in the sport and the sociology of skateboarding, often took to a board himself as part of the research.

From his conversations with middle-aged enthusiasts, he found that skateboarding alleviated symptoms of depression and other mental health issues, provided an opportunity to reconnect with their children and helped people cope with personal trials and tribulations, including substance abuse.

‘Middle-aged skateboarders appear to acknowledge the health benefits of being active and obtaining exercise through skateboarding; however, their main focus appears to be pleasure,’ said Dr O’Connor.

‘Older skateboarders may well be interested in losing weight and keeping fit, but these are often reported to be by-products of the more general well-being achieved through the activity.’

‘Skateboarding provides a serious emotional outlet for people who have experienced personal trials in the collapse of long-term relationships, career challenges, parenthood, and substance abuse.’

Sadly, Dr O’Connor says, a variety of news reports and magazines have sometimes derided the middle-aged skateboarder as ‘sad’ and in the midst of a ‘mid-life crisis’.

‘Typically, these criticisms are levelled at men and tend to trivialise the middle-aged skateboarder as a joke,’ he added.

‘In contrast, representations of middle-aged female skateboarders are often more positive and celebrate their inclusion and participation in skateboarding.

‘A distinction in this gendered discussion is that men are scrutinised for chasing their youth, while women are celebrated for facing their fears.’

Dr O’Connor defines skateboarding as a ‘lifestyle sport’ – an umbrella term that refers to a range of informal and thrill-seeking urban and rural sporting activities. 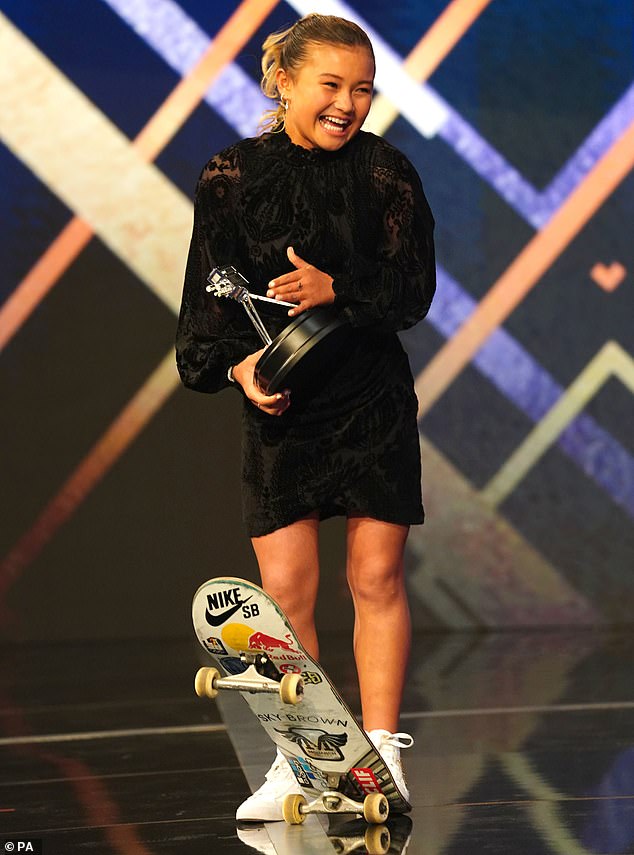 Lifestyle sports have no uniform, rules, or time-frame, and are understood as relatively recent sports compared to football or rugby.

Most importantly, lifestyle sports tend to be more about enjoyment of the activity and less about competing with another side or player.

‘Football may typically be understood as competitive; the object is to succeed in scoring goals and not to concede them from the other team,’ Dr O’Connor said.

‘In skateboarding there is a much more fluid understanding of success, and one that is open to failure as a contingent part of the activity, of both learning and progressing.’

The study has been detailed further as a chapter in a new book called ‘Lifestyle Sports and Identities’.

The books presents a range of global case studies about the effects of alternative sports such as climbing, surfing, mountain biking, skateboarding and roller derby.

The public can request access to Dr O’Connor’s chapter through the University of Exeter’s online portal.

For 47-year-old Canadian Mark, returning to skateboarding after 20 years was a way to get his life back in order.

After having a successful career as a lawyer he moved to Bali with his wife and teenage son and soon started skateboarding again.

Riding on his board provided a sense of freedom and exhilaration and had enabled him to ‘plug in’ to an eclectic community in Bali.

The sport was also a way for him to enjoy time with his children.

Many skateboarders had children who had either ignited or rekindled their parent’s passion for skateboarding and as a result altered the relationship they had with their boards and the skateboarding community.

Chris, 41, from the US, said skateboarding provided a way to spend time with his son in a way he hadn’t encountered with his own father.

It had given him solace and identity as a young teen when his parents broke up, and also an outlet while he served as a Marine granting him access to skateboard scenes in far off places like Japan.

His vocabulary when discussing skateboarding included the terms ‘joy’, ‘serenity’, ‘happiness’, and ‘feeling’.

Chris spoke about the personal space that skateboarding provided for him, a moment of calm away from the responsibilities of paying the bills and the constant worries of being a family man.

Two men, one in America and one in the UK, were both on anti-depressants, and found that skateboarding was an additional tool that helped them with their mental health.

Charles, who was 37, reflected on his dead-end job, his failing health, and his need for a creative outlet.

He said: ‘skateboarding to me is pretty much everything. I can’t imagine my life without it’.

He said skateboarding had saved him from doing ‘stupid things’ in his life, a way to do something other than continually partying.

This was a theme that was shared by 51 year-old Canadian Debbie. She spoke of a particularly dark time in her life when she broke up with her long-term girlfriend and was left heartbroken and with a high rent to cover on her own.

At this time skateboarding, which she had not done for over a decade, became a source of joy and salvation.

Debbie made T-shirts for herself and friends with the slogan ‘skateboarding saved my life’.

She said the community and activity of skateboarding provided a time and space where she knew she was ‘going to be happy.’

She reflects that because of her mental state ‘I could have turned to drugs or drinking’, but instead skateboarding filled her with happiness and provided a space where she felt unconditional acceptance.

Peter, a 45-year-old artist, held a clinical diagnosis for depression and anxiety.

Skateboarding to him was a ‘big tool for mental health’ as it delivered a release of endorphins and provides him with self-confidence.

So important is skateboarding for his wellbeing, that days where work or rain prevented him from getting on his board result in him feeling depressed and lethargic.

Several informants made allusions to religion or spirituality in some form, highlighting that skateboarding provided an outlet and source of communication to connect to ‘bigger issues.’

Matt from Kansas spoke about the fact that skateboarding was his religion and that while most of his community was in church on Sunday morning, he was out skateboarding, visiting local skateparks, or bombing down hills uninterrupted by the traffic of the working week.

Another skateboarder regarded skateboarding as somewhat analogous to religion.

He saw that like religious traditions skateboarding offered a space of worship, and a sense of calm concentration that he referred to as mediation.

He saw that this was a fragile state and that if not respected such serenity would result in injury.

Taking the comparison further he indicated that community was a large part of skateboarding and something that religions similarly seek to foster.

He linked skateboarding with the human need to transcend, to search and push for more, and to aspire to leave the earth and reach for the heavens.