METAVERSE tokens including Sandbox have been surging recently thanks to some favorable news. 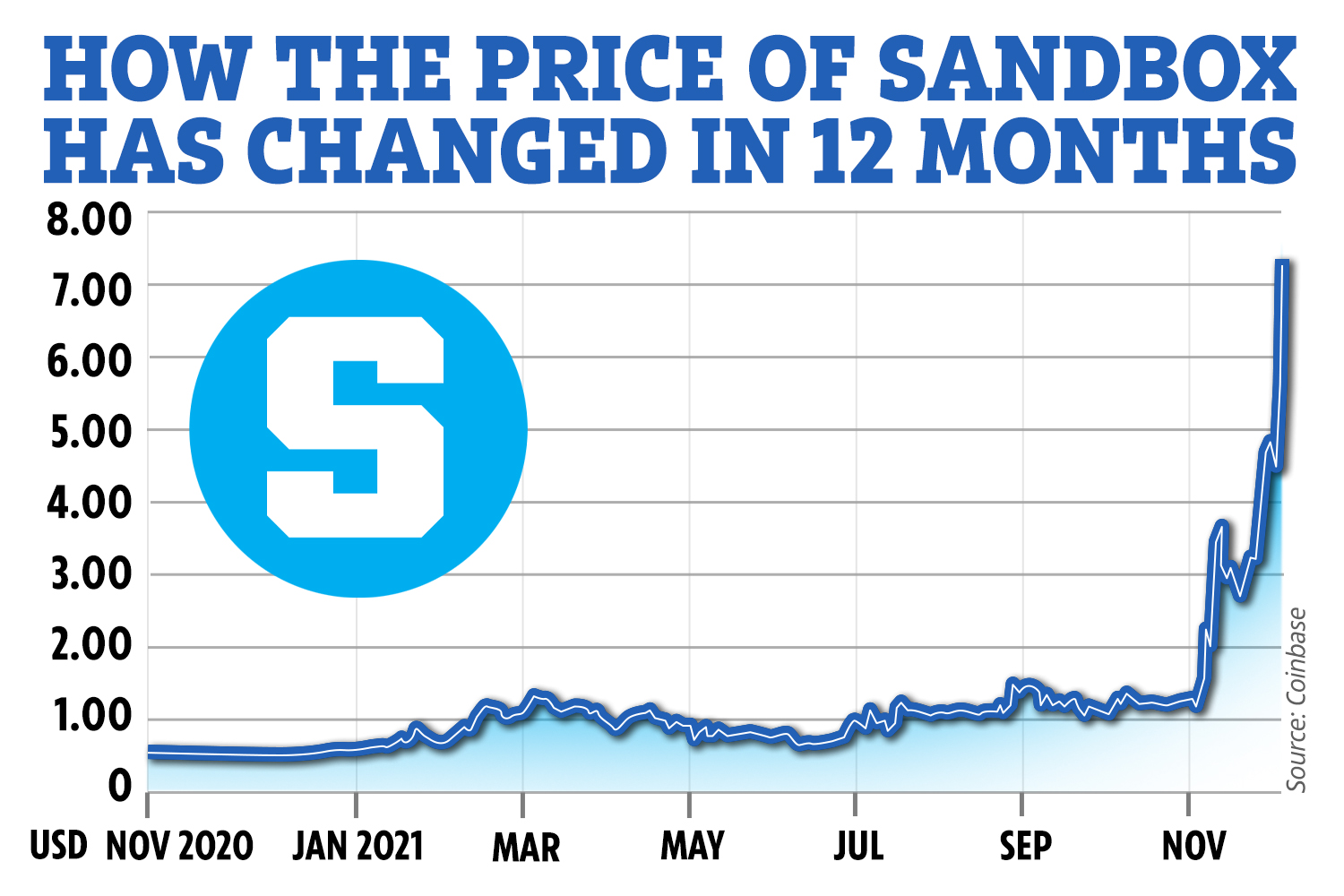 Furthermore, the metaverse cryptocurrency reached an all-time high of $7.24 today and has gained 108% and 777% in the past week and month respectively.

Some of the gains can be attributed to Sandbox getting set to launch an Alpha hub, which will launch on November 29 and last until December 20.

This is a big deal because this will allow users to enter its metaverse for the first time.

"This is significant because their launch and integration on Polygon will include DeFi staking and redeployment of the Sandbox's already thriving NFT marketplace," DeFi and NFT expert Rio Rocket told The Sun.

Under the Alpha hub, just 5,000 passes will be made and it is starting to raffle the first 1,000 to LAND owners this week.

Another portion of the gains is thanks to social media giant Facebook.

Specifically, Facebook changed its name to Meta in late October– aiming to “bring the metaverse to life.”

Another metaverse cryptocurrency Decentraland (MANA) has also benefited from that news as well.

But before you look further, make sure you understand the risks when it comes to cryptocurrencies.

These are especially risky because of the extreme volatility that occurs in the industry – meaning you could lose your money quickly if you’re not careful.

Moreover, the crypto space can come with a ton of complexity. In other words, make sure you don’t invest in anything you don’t understand.

A metaverse is a virtual reality experience where users can interact with others. You can think of its as a virtual universe.

Adam Ng, chief executive officer and founder of market research firm Trusted Malaysia told The Sun that metaverses "will serve as a catalyst" when it comes to decentralized governance and finance.

"People are now buying, acquiring, selling, and trading land, condos, money, clothes and more in the metaverse," he said.

"And these are rising in value, either on exchanges or in games, either in real dollars or in metaverse cryptos."

Founded by Sebastian Borget and Arthur Madrid, Sandbox models itself as a “community-driven platform where creators can monetize voxel ASSETS and gaming experiences on the blockchain”.

It uses the token SAND, which runs on Ethereum’s blockchain.

The supply of SAND amounts to 3billion, according to the cryptocurrency.

There is also an element of LAND, which the cryptocurrency describes as portions of the meta-world.

While this is owned by the players, the LAND will always be limited to 166,464.

Furthermore, LAND can be used to host games, construct homes, and for multiplayer engagements.

Given the recent gains, some may be wondering if Sandbox will be able to gain further to reach $10 in the near future, or if it will crash and fall.

First off, to reach $10, Sandbox would have to rise by 49%. Given the recent trends, it could be only a matter of when.

Mr Rocket has touted Sandbox's "vesting schedule" and noted that it plans on following the footsteps of Minecraft by launching its virtual world to the consoles of PlayStation and Xbox.

If that happens, he said: "We are very likely looking at at least a 5x or 10x from current levels by next year."

For instance, Coin Price Forecast sees Sandbox gaining even further by the end of the year to $13.52. It then expects it to explode past $64 at the end of 2026.

The cryptocurrency forecaster sees Sandbox falling to $5.807 in a year's time but then gaining to $13.305 in five years from now.

But make sure you’re aware that price predictions are subject to change should there be more bullish or bearish trends.

Also, check out four things you need to know about Dogecoin.