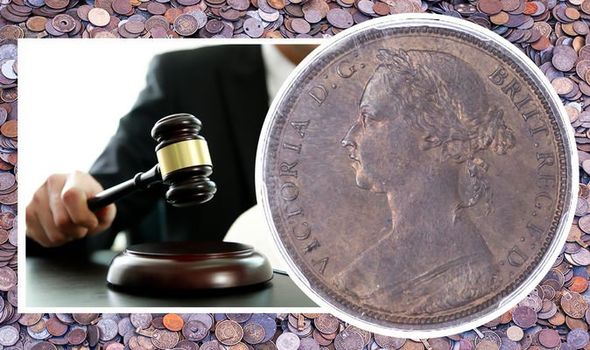 There’s no better feeling than finding an unexpected coin or even a note in a coat pocket. But have you ever paid close attention to the pennies potentially in your purse or hiding in a box in your attic? It comes after a rare Victorian penny has fetched a record £37,200 after a fierce bidding war broke out at the London auction house Baldwin’s.

The 1882 Young head Bronze Penny has long been considered the most prized coin of its era.

Before now, just one perfect specimen had ever appeared at auction, though whispers of a ‘lost twin’ circulated for years, dividing experts while adding to the coin’s folklore.

For enthusiasts, the coin’s allure stems from a peculiarity in its design.

Nearly all pennies struck that year came from the Heaton Mint in Birmingham and featured a ‘H’ below the Britannia emblem.

However, a tiny number of ‘No H pennies’ minted in London were also produced, which collectors have obsessed about for more than a century.

Many had doubts one would ever be seen again, casting doubt on its very existence.

Then, earlier this summer, an elderly gentleman arrived in the London offices of Baldwin & Sons and produced the fabled coin from a leather purse.

The owner explained how he had acquired it in a private sale in the 1980s for just £1,000, and it had remained hidden in an underground vault for more than 30 years.

The coin which is 30.8mm in diameter and weighs 9.4g – features a laureate bust of Queen Victoria on one side and a seated Britannia on the reverse.

Baldwin’s panel of experts immediately recognised it as genuine.

It was ultimately awarded a ‘Mint State 64 Brown’ grade by an independent appraisal specialist – meaning it is considered virtually flawless.

Understandably, the penny attracted a lot of interest, especially from overseas and bidding was fierce.

On a gram for gram basis, the price paid by the anonymous buyer made it around 100 times more valuable than gold, and 3.75million times its own face value.

Neil Paisley, MD at Baldwin’s, spoke about the coin: “Obsession with the ‘No H penny’ has driven treasure hunters to pour through collections and auctions for over a century hoping to find a flawless example of this special coin.

“Many gave up in frustration, with some even casting doubts as to whether we would ever see another perfect specimen.

“We were delighted to be able to assuage those doubts.

“Rare pennies like this can be worth more than Bitcoin, and who knows what treasures still lie hidden in people’s attics.”

The most rare £1 coins are all part of a series celebrating the British capitals.

The rarest 50p coin is the Kew Gardens coin, which is also the rarest coin in circulation. It there were only 210,000 minted.

It is not so easy to evaluate the rarest 20p coins, 10p coins and even 2p coins as exact circulation figures are not known.

However, various versions of the coins are known to sell for large sums.