PLATELL’S PEOPLE: We will all remember how Boris Johnson poisoned Poppy Day

Tomorrow, were it not for the lockdown, I would be fastening a poppy to my lapel and heading to church under the wintry sky for one of the most solemn ceremonies in this country’s calendar.

Like millions of Britons on Remembrance Sunday, I’d pay homage and give thanks to those who died for us.

For some of the service, we’d be gathered for prayers in front of a war memorial bearing the names of local lads, dads and brothers.

We’d spend our two minutes’ silence trying to comprehend the poor souls’ bravery and sacrifice. And there’s also the most poignant moment of all, as the air is pierced by the bugler’s Last Post.

Not this year, though. Not under Boris, the first Prime Minister to cancel Remembrance Sunday. 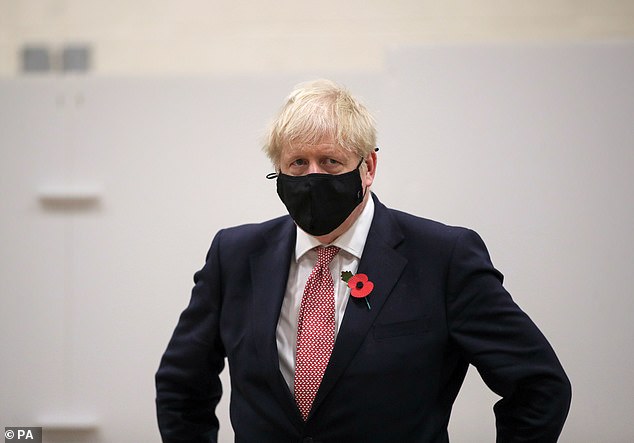 Boris Johnson, the first Prime Minister to cancel Remembrance Sunday, wore a poppy during a visit to a Covid testing centre at De Montfort University in Leicester yesterday

Any veteran who dares attend his local church — perhaps on a walking frame, or in a wheelchair, medals pinned to his chest — faces a £200 fine. How could Boris, an armchair general if ever there was one, have made attending a Remembrance Day service a criminal offence?

Does he have any idea how important it is to those who have fought for us — and to the country? Do any of his advisers have a compassionate, Christian bone in their bodies?

No surprise that real generals have lined up in ranks to condemn the decision. Falklands commander Major General Julian Thompson said it was ‘absolutely ridiculous’.

Lord West of Spithead declared it ‘extraordinary’ that the Government, having declared outdoor events can still take place, was forcing veterans to commemorate fallen comrades outside in the cold. ‘This puts them more at risk,’ he said. ‘They’ll die of pneumonia rather than Covid.’ 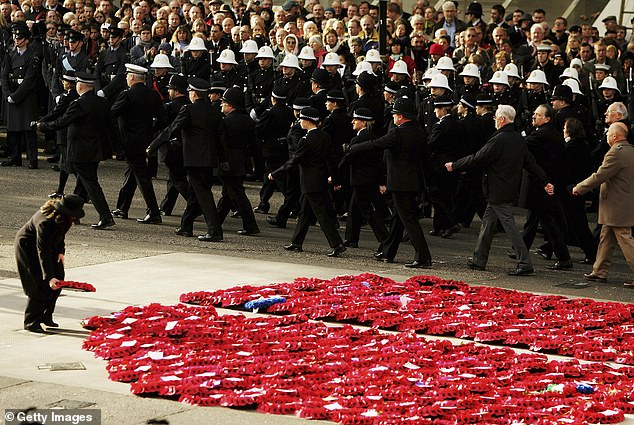 No surprise that real generals have lined up in ranks to condemn the decision. Falklands commander Major General Julian Thompson said it was ‘absolutely ridiculous’. Pictured, a lady places a wreath at the base of the Cenotaph in 2006 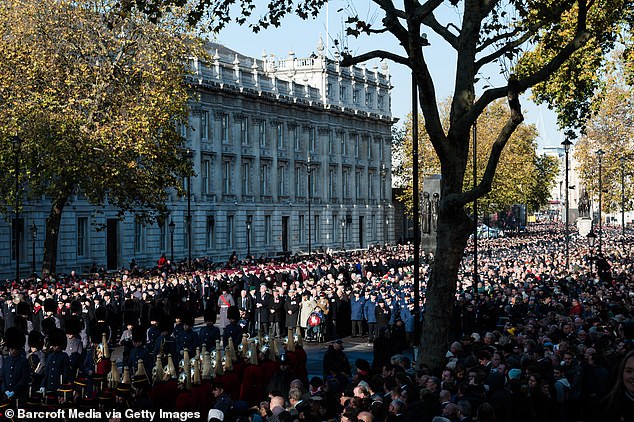 Thousands of people, army veterans and military personnel take part in the National Service of Remembrance at the Cenotaph on 10 November, 2019 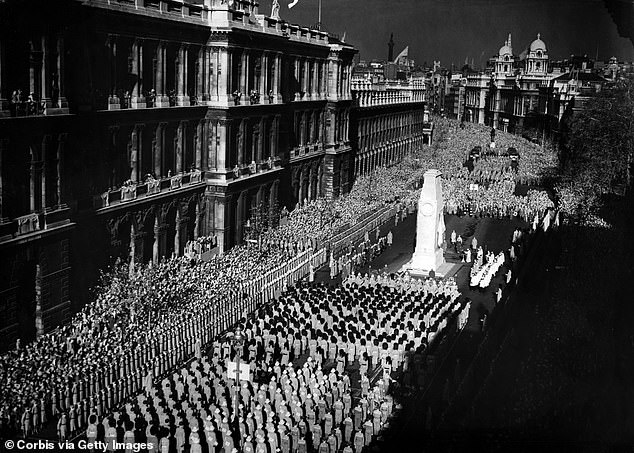 A Remembrance Sunday service at the Cenotaph in Whitehall, London, around 1945

Yes, there will be a Government-sanctioned, socially-distanced, broadcast service in Westminster Abbey for a handful of warriors. But only a philistine might believe a Zoomed Remembrance Day service could replace the real thing.

And why couldn’t similar services have been extended to local churches? They are huge buildings.

As ex-defence secretary Sir Michael Fallon said: ‘We trusted veterans to put their lives on the line for the country but we cannot trust them to stand two metres apart in church.’

Boris will rue this Sunday. The veterans will remember him all right — for all the wrong reasons.

You don’t have to luvvie Mrs T!

Ahead of her performance as Margaret Thatcher in the award-winning series The Crown, Gillian Anderson says she had to stifle her personal antipathy towards Maggie.

‘I had to get to a point where it’s nothing to do with my opinions of her policies, or her actions,’ she says. Just like Meryl Streep, who also expressed deep misgivings before collecting her Oscar for playing The Iron Lady.

What is wrong with these women?

From the way they’re behaving, you’d think they would prefer to play Myra Hindley!

Meanwhile, lawyers for Black Lives Matter protester Astrophel Sang, 19, who tried to set fire to a flag after climbing the Cenotaph, said their client — weeping in court — regretted his actions. Setting aside questions of decency, ignorance is no defence. Plenty of time to weep in prison.

Susannah Constantine reveals she was a ‘highly functioning’ alcoholic 20 years ago when she was telling us What Not To Wear on her hit TV show.

She’s now been seven years clear of booze, has kept her family together, and well done her.

For her many fans, myself included, she was the Coco Chanel of British style, advising us that ‘less is more’. 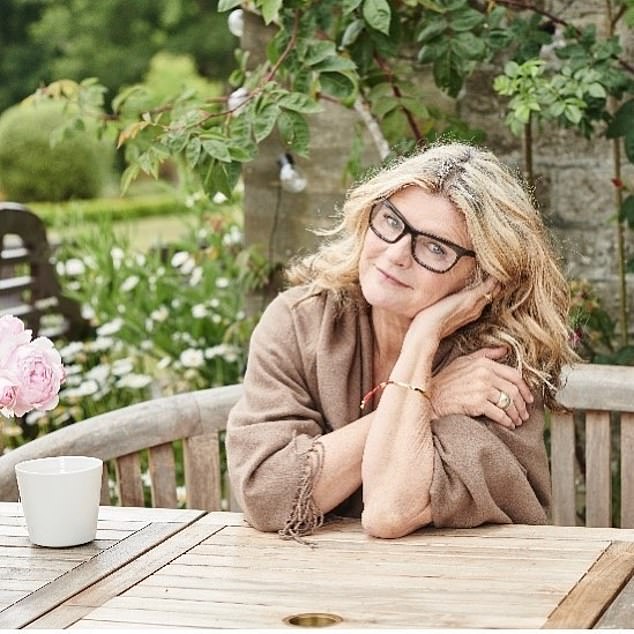 Her abiding mantra was that ‘you can’t do legs and t*ts’ at the same time.

A lesson that clearly did not reach most of those lasses celebrating the last night before lockdown in cities throughout the country last Wednesday.

Well done, Gary Lineker, for honouring his promise to take in an asylum seeker. For 20 days he housed Balochistan refugee Rasheed, a lawyer who fled persecution to further his studies here in the UK, while vowing to return home to the borders of Iran and Pakistan to fight for justice there.

I don’t want to be mean, but wasn’t it a little self-serving of Gary to share on social media the effusive thank you note Rasheed left him? I’d say it makes Gary Mug Of The Day.

Pure happenchance, surely, that the multi-millionaire, happily loved-up pop princess’s sizzling new album — yes, she managed to record one, despite these tough times — is out this week. 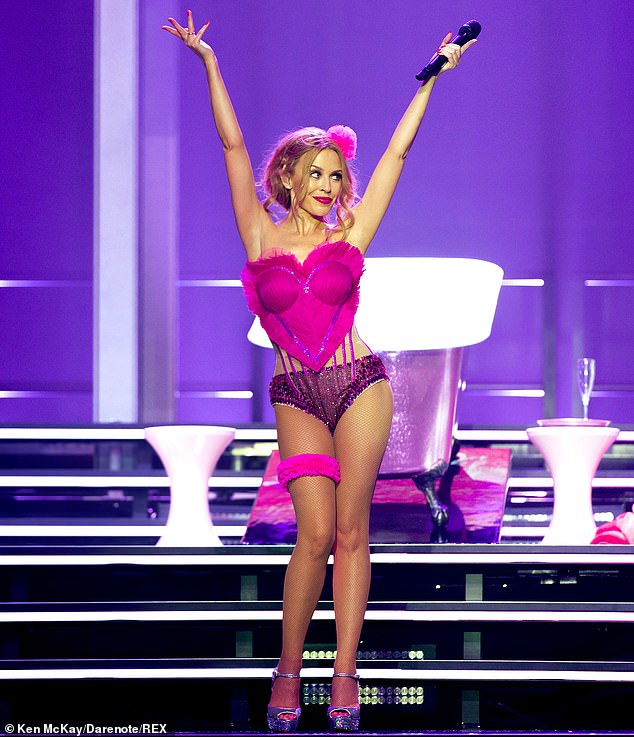 One suspects the only tears that will not be shed in the White House if Donald Trump is evicted will be those of his wife Melania.

Her sharp trouser suit and even sharper stilettos as she exited stage right on election night said it all.

No longer would she have to suffer those appalling stepchildren stalking her every move, mostly Trump’s daughter Ivanka, who tried to depose her as First Lady.

No more lying in bed beside a fake-tan-stained pillow.

What’s the betting the gracious and private Melania will be out of that marriage before the final votes are counted?

Don’t B so greedy Mel

Ex-Spice Girl Mel B is suing Hollywood actor Eddie Murphy, the father of their daughter Angel, 13, to increase the tens of thousand of pounds she receives in child support from him a year.

Maybe Eddie should have taken note of her hit song Wannabe: ‘If you wanna be my lover, you gotta, you gotta, make it (the alimony) last forever.’

So much for feisty, independent girl power. 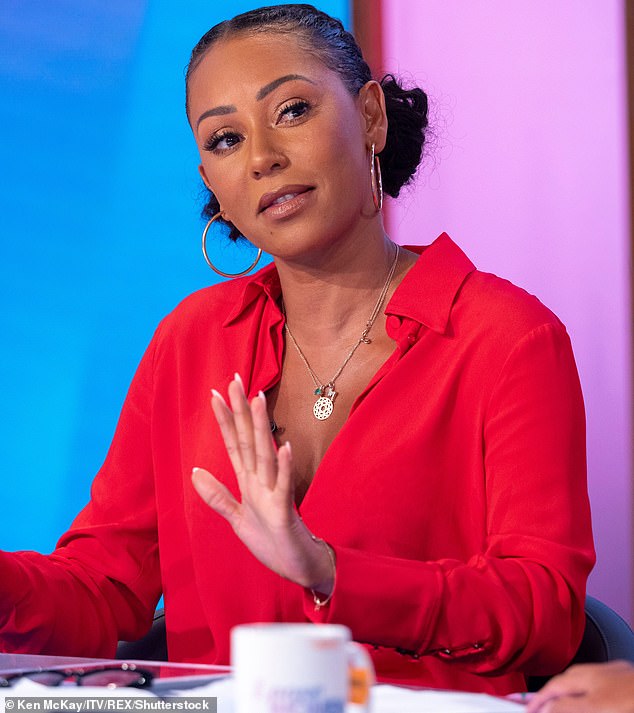 Ex-Spice Girl Mel B (pictured on Loose Women in 2019) is suing Hollywood actor Eddie Murphy, the father of their daughter Angel, 13, to increase the tens of thousand of pounds she receives in child support from him a year

Researchers conclude that to encourage children to eat greens they should employ food ‘mindfulness’.

Place a bean in the child’s mouth, ask them to eat it slowly while noting how it tastes and feels in their mouths, then have a discussion about it.

Crikey, what happened to ‘eat whatever’s on your plate, sunshine, or go to bed hungry’?

Having once met one of my heroes, Frank Gardner, at Heathrow airport years ago, I was struck by the way his beautiful wife Amanda stood beside him in his wheelchair, not as carer but loving consort.

She is the wife of 22 years he claims got him through the devastating attack by terrorists that crippled him, and helped keep their small family together.

And so I felt a sliver of disappointment that in his BBC documentary Being Frank, it was his new girlfriend, weather girl Elizabeth Rizzini, who took centre stage to gush about her new beau. There was no interview with Amanda.

Who knows how the marriage ended. Frank said they drifted apart, but it must have been agony for Amanda and their daughters to see his new girlfriend so paraded, when it was they who travelled the long miles with him.