THEY say the greats need no introduction. Some of them don’t even require both names.

With some, one is enough. Mention Elvis or Adele, Tiger or Serena, Prince or Usain and you just know. 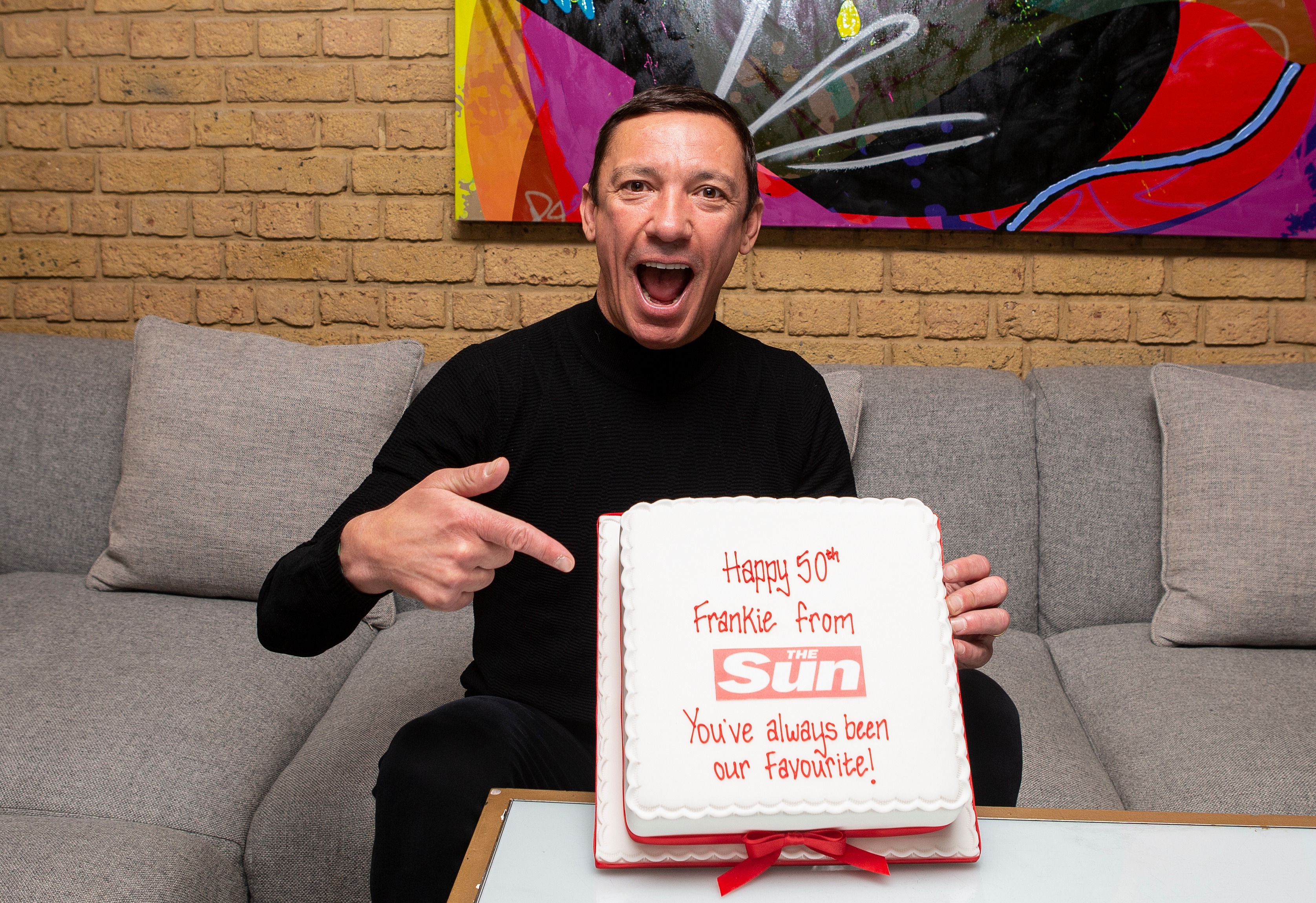 Yet horseracing is one sport that has hardly been awash with such figures over the years.

Lester certainly, although only to those of a certain age.

Dessie possibly, although that one was a horse.

In the current era, though, only one person can lay claim to that particular honour. Not merely to fans of the turf either.

Say the name ‘Frankie’ to anyone with no more than a passing interest in sport and they’ll know exactly who you mean.

The greatest character racing has seen. Many will argue the greatest jockey. Certainly if you had to pick one man to ride for your life, you’d look no further.

On Tuesday that man, Frankie Dettori, turns 50. And at an age when most of us think a dart to the loo in the middle of the night is a workout, he is still the best in his profession.

A man who, when it comes to the biggest races on the biggest stages, remains head and shoulders above his peers.

A man whose career would make a decent screenplay for a Hollywood blockbuster, if only parts of it weren’t so far-fetched. Only it’s not. It’s reality. It’s unbelievable . . . it still is.

From the know-nothing Italian teenager who landed at Luton airport in 1985, to the man who became No1 jockey for the world’s richest owner.

From the guy later dumped by the same Sheikh and then banned for six months after failing a drugs test for cocaine, to the one who rebuilt his career and rose higher than ever.

And a jockey who, even as he hits the half-century, retains a burning ambition — and still sports both a winning smile and winning style like no other.

Anyone who saw his first-ever race could have quoted their own odds on the tiny kid from Milan getting a job as a stable hand, never mind stable jockey.

An eight-year-old Frankie finished last on Silvia, the pony his dad, 13-time Italian champ Gianfranco had bought him, and fell off as they passed the post.

But he had been bitten by the bug. He picked himself up, as he has done many times since, and when his father wangled him a job in Luca Cumani’s yard, over he came aged 15.

Dettori was a natural. He won his first race in 1987, one of eight that season. Three years later he was the first teenager since Lester Piggott to ride 100 winners in a season.

He landed his first Group 1 in 1990 too, on Markofdistinction, 12 months after he had been champion apprentice. 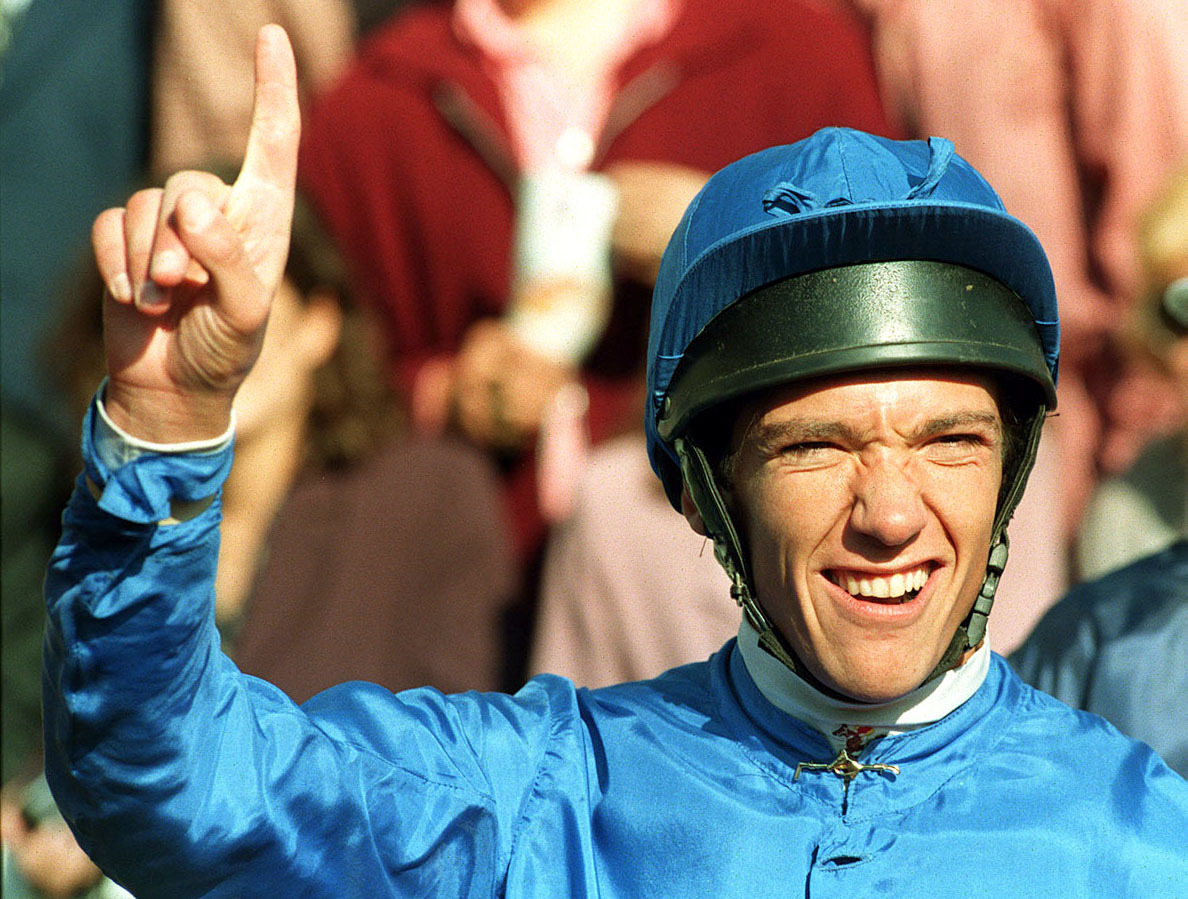 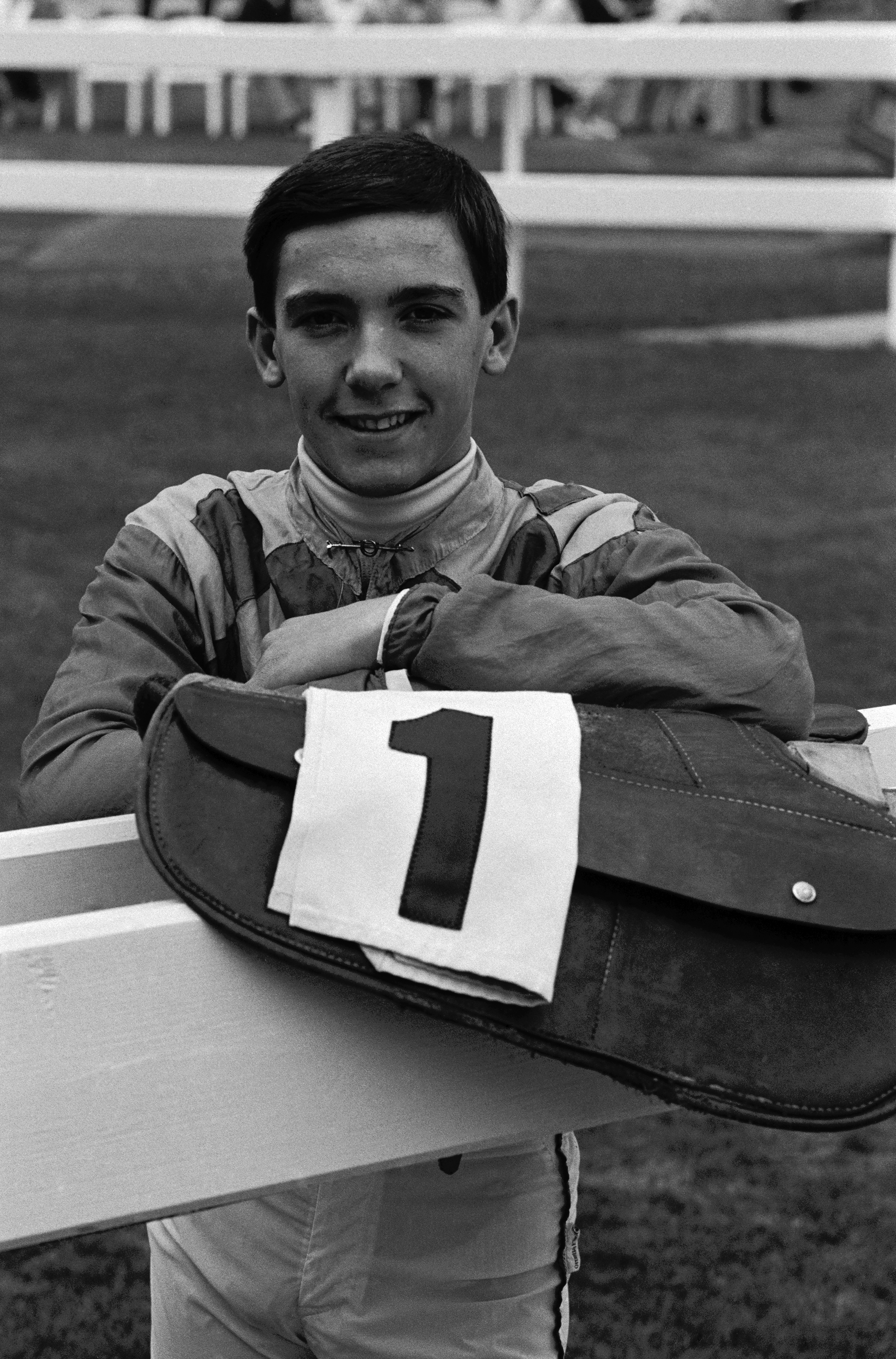 The touch paper was lit. The career was taking off.

When Sheikh Mohammed wanted a first rider for his string of superstars, his gaze didn’t get beyond the young Italian.

What a team they made. Dettori landed over 2,000 winners in the royal blue silks, over a scintillating 18-year partnership.

He was unstoppable, even though a tragic accident in 2000, when the Piper Seneca flying Frankie and fellow jockey Ray Cochrane to Goodwood crashed soon after take off so nearly ended it all.

Pilot Patrick Mackey was killed and Dettori was only saved when the heroic Cochrane pulled him to safety before the plane exploded in flames.

Frankie escaped with a fractured ankle, broken thumb, cuts and burns. It was a miracle anyone survived and he remains an edgy flier to this day.

Back in action, the winners continued, and his last year with Godolphin saw him land £1.9 million in prize-money. Yet it was about to come to an abrupt and acrimonious end.

It was the worst time of his career, and the split was sealed when he accepted the ride on Camelot in the 2012 Arc, trained by Aidan O’Brien.

To the Godolphin team, riding for their biggest rival was an act of betrayal.

The break was swift and ended with anything but a smile and a handshake.

Suddenly it was all turning to dust. Announcement of his departure was followed by even more staggering news . . . he had tested positive for cocaine.

OFFER OF THE DAY

T&Cs: New customers only. Place your FIRST bet on any sportsbook market and if it loses we will refund your stake in CASH. Max refund for this offer is £20. Only deposits made using Cards or Apple Pay will qualify for this promotion. T&Cs apply. Paddy's Rewards Club: Get a £10 free bet when you place 5x bets of £10+. T&Cs apply. 18+ Begambleaware.org

Such was Frankie’s standing, it was the headline item on that night’s news.

Ahead of Barack Obama being re-elected and the war in Syria.

He was ashamed and embarrassed. He had to explain it to wife Catherine, his five kids and — worst of all — his parents.

Banned for six months, his image was in tatters. He had gone from greatest jockey to a contestant on Celebrity Big Brother. The smile was still there, but it was only a mask.

A 20-year upward curve was suddenly plummeting downwards. Confidence was rock-bottom. He was depressed. The magic had gone, maybe for good.

Then came a call from John Gosden in late 2014, ironically the Sheikh’s No1 trainer back in 1993, which offered the chance to ride again for his old guv’nor. He didn’t need asking twice.

In the months prior to it, though, the last thing on his mind was one of his famous flying dismounts. More his painful fall from the public’s hearts and from the sport he loved.

Had Gosden not picked up the phone when he did, it could have been the end. By Dettori’s own admission, he was maybe three months from retiring.

As he told Racing TV’s Nick Luck last year: “I was slowly preparing myself for the next step. I was like the hot potato,  no-one wanted to touch me.” 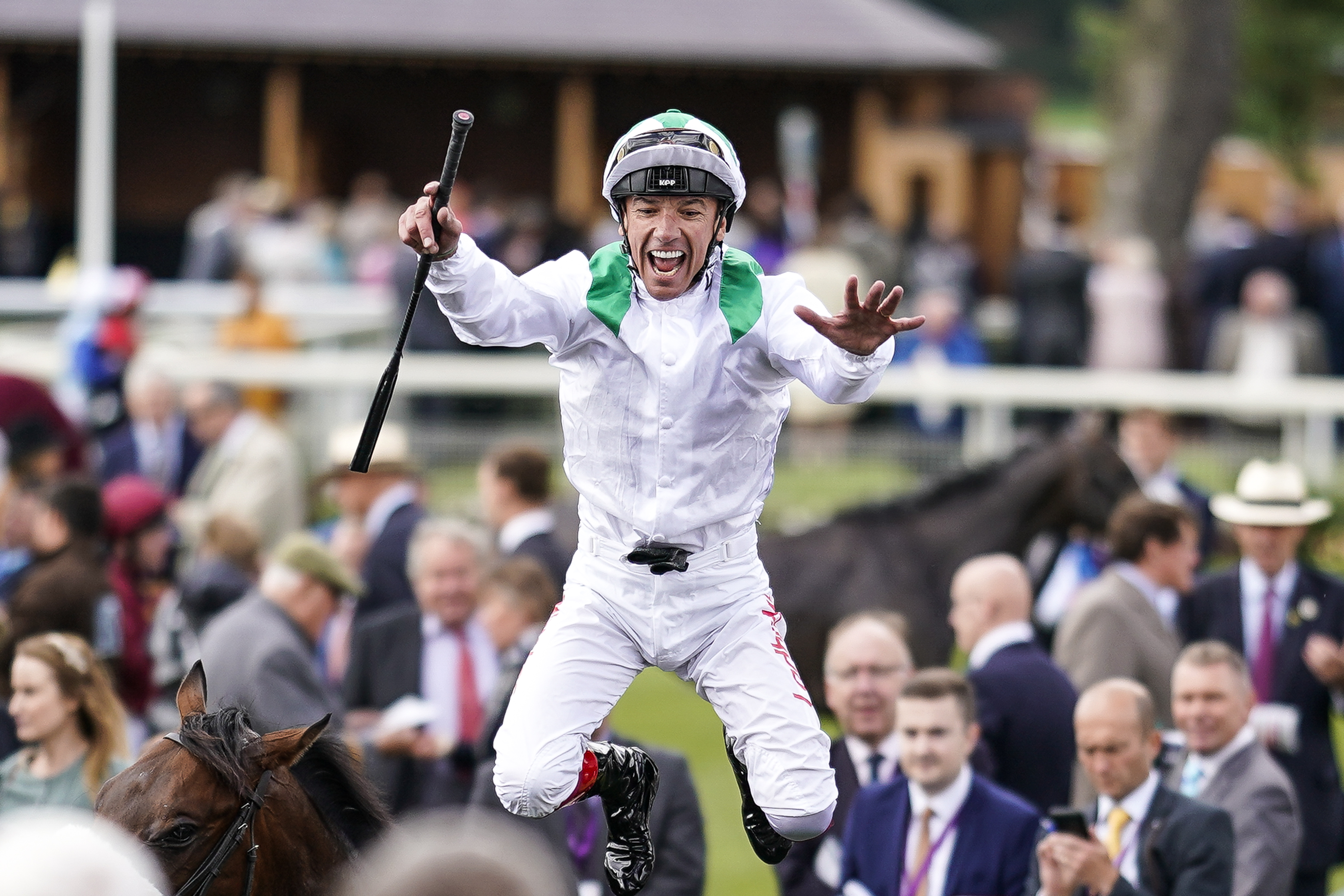 There was  sympathy, but that didn’t pay the mortgage. Yet in Catherine and kids Leo, Ella, Mia, Tallula and Rocco, he had the perfect team to keep spirits high.

And thanks to Gosden, he was about to forge the most solid and supporting  working relationship.

These days Gosden lets him get on with it — with the odd gentle reminder it’s actually all about the horse, not the jockey.

He gave him that dig in the ribs after Stradivarius won a fourth Goodwood Cup this summer. Frankie wouldn’t have accepted it from anyone else.

If it was an upward curve in the early days, it has been a stratospheric rocket ride in the latter. Group 1s galore, leading Royal Ascot rider and, best of all, Enable.

Yes, Lammtarra captured his heart with the first of his six Arcs, and Balanchine will always be special for the first of 19 British Classics, in the 1994 Oaks.

Barathea and the 1994 Breeders’ Cup Mile — the first time we were treated to the flying dismount — Stradivarius, Authorized, Cracksman, Golden Horn. They and many others all did their bit.

But none like Enable, who had him in tears with her victories and again when she was retired.

Not so Frankie. A year ago, with most sports stars long since pensioned off, he won a career-best £7.3m  — most of which, he joked, went on his kids’ education. 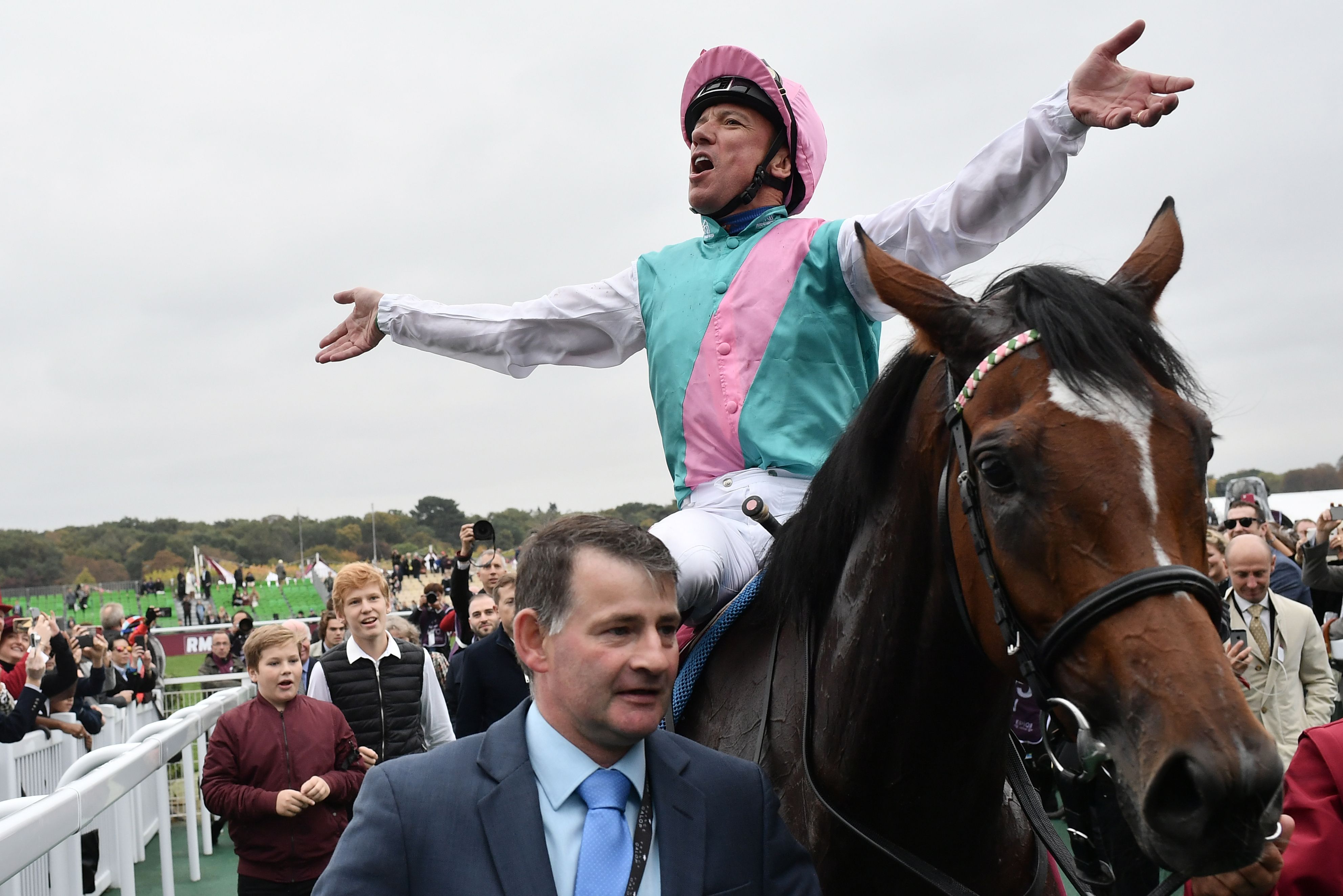 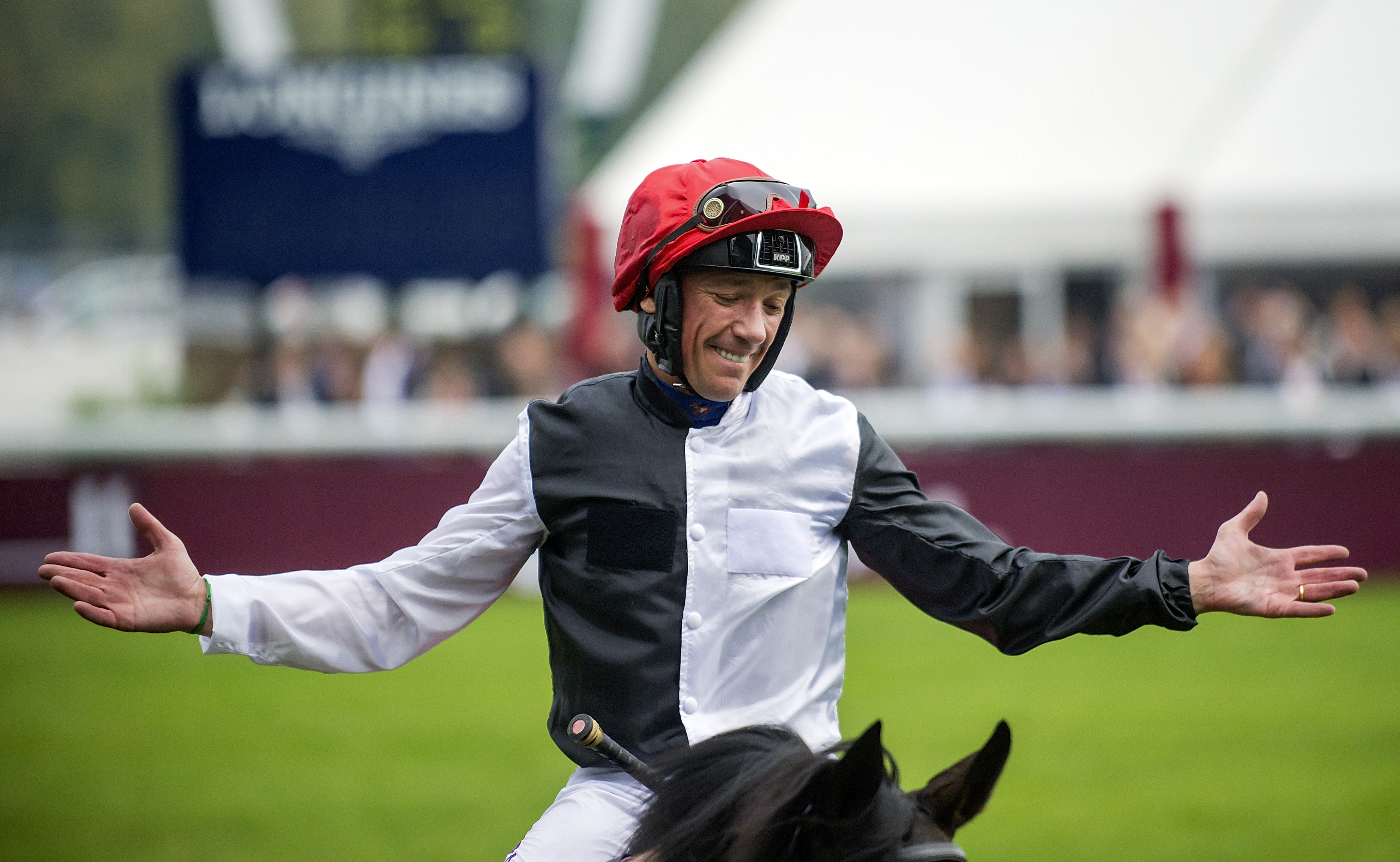 Not that he could please everyone even then. His dad still watches every race and finds fault in pretty much all of them.

As he says: “At that age you don’t bounce any more, you break. I will go on as long as the body allows. If that means I have to break Lester’s record and ride till I’m 58, so be it.”

You wouldn’t bet against it. Not with things still to achieve, even if the dream of riding against his son Rocco is unlikely.

As Dettori admitted: “I’d have loved nothing more, but sadly his height will probably prevent that.

“Really I just want my children to have their own happy lives.”

Still targets remain. He wants to win the Melbourne Cup. The July Cup is still on the agenda.

For the moment, though, even in “normal times” December and January would be family months.

That’s the  time of year Catherine  and his teenage brood know dad will be at home.

Doubtless he will put on around 7lbs over Christmas, then sweat it off before  riding in the Middle East until  March.

Then he will be back on the treadmill once again. The 1,000-plus rides a year has dropped to around 200 but the sniff of a big stage, a big  occasion and a big prize, and he’s on it like a starving Labrador on a side of ham.

The hunger is as fierce as ever, the will to win equally so. Reading glasses are his only concession to the advancing years.

Long may he remain in the saddle. Racing wouldn’t be the same without Frankie. As they say in Milan, buon compleanno.