A national disaster recovery agency designed to prepare Australians to deal with floods, droughts, fire and cyclones will get advice from a new Australian Climate Service, which will anticipate risks from climate change.

The government is also planning a sixth round of grants for regional areas, with $250 million on offer for “shovel-ready” local infrastructure projects, events and community building across Australia. 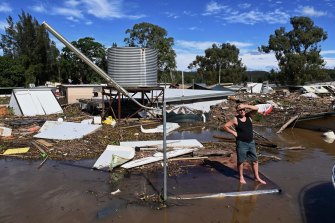 A new National Recovery and Resilience Agency will co-ordinate the response to natural disasters such as the NSW floods earlier this year.Credit:Nick Moir

The $600 million National Recovery and Resilience Agency will start operations from July, bringing together existing efforts managing recovery from drought, bushfires, the North Queensland floods, and recent storms and floods in NSW and Queensland, and cyclones in Western Australia. This includes managing the $2 billion national bushfire recovery fund set up after the fires of the 2019-20 summer.

State governments will still provide support while a natural disaster is happening and the national agency will step in once the immediate crisis has passed. The bushfire royal commission last November recommended a national recovery agency be set up.

Prime Minister Scott Morrison said the funding, to be included in next Tuesday’s budget, would both help communities rebuild and strengthen defences against future major disasters.

“Immediate funding will support resilience projects across the community and for individuals’ homes, such as bushfire and cyclone proofing houses, building levees and improving the resilience of telecommunications and essential supplies,” he said. 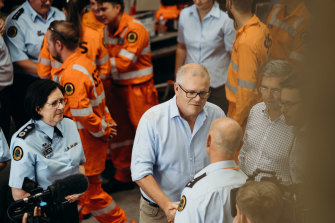 “In the past two years Australians have faced floods, bushfires, cyclones, drought and now the COVID-19 pandemic and I’m determined to keep Australians safe and support the recovery of communities and regions right across Australia.”

Its work will be informed by a new Australian Climate Service that is intended to help policymakers better understand future climate and natural disaster risks.

The service will be a collaboration between the Bureau of Meteorology, the CSIRO, Australian Bureau of Statistics and Geoscience Australia. It will inform long-term planning for infrastructure, housing and basic services like power, telecommunications, and water.

“Through the Australian Climate Service we will draw on the expertise of our best and brightest scientists to help us better anticipate, manage and adapt to climate impacts to will inform the work of the National Disaster and Recovery Agency and Emergency Management Australia,” he said.

Deputy Prime Minister Michael McCormack will also use a speech to the Regional Australia Institute in Rockhampton on Wednesday to announce a further round of grants under the Building Better Regions Fund, bringing it up to more than $1.2 billion in total spending since 2016.

He will point to population movement out of the big cities and increasing house prices in regional areas.

“It makes sense – a stronger regional Australia is witnessing rising demand for our quality of life and that’s backed by federal government investment,” Mr McCormack will say, according to extracts of his speech.

The Auditor-General is considering a detailed examination of the Building Better Regions Fund. The grants program came under scrutiny in April after the ABC revealed that in its fourth round, approved on the eve of the 2019 election campaign, 112 of the 330 projects were chosen by Mr McCormack and a ministerial panel against departmental advice, although all had been assessed as delivering value for money.

Ahead of the budget, shadow treasurer Jim Chalmers used a speech in Brisbane on Tuesday evening to demand Josh Frydenberg reveal the economic cost of the failure to fully roll out a coronavirus vaccine.

He said the last budget had estimated a faster rollout could boost economic activity by $34 billion, but since then the rollout had fallen behind the government’s own targets.

Mr Chalmers said the budget had to be judged on whether it delivered more secure jobs, lifted wages, encouraged a new generation of clean and cheap power and improved the economic security of women.

“After eight long years of a government soon asking for 12, the budget can’t be yet another missed opportunity,” he said.

“It needs to be more ambitious about actually delivering full employment and set out a genuine jobs plan that strengthens and diversifies our economy and ensures growth is broader, more inclusive and more sustainable.”

Meanwhile, a range of First Nations groups and the Federation of Ethnic Communities Councils Australia are concerned they have not been included in the budget lockup and won’t have the opportunity to scrutinise its policies before they are announced.