Nasa’s drone was airborne in the thin atmosphere of the red planet for less than a minute. Scientists immediately compared the journey to the Wright Brothers’ first controlled aircraft flight in 1903. MiMi Aung, project manager at Nasa’s jet propulsion lab in California, said: “We can now say that human beings have flown a rotorcraft on another planet.

“We’ve been talking for so long about our Wright Brothers moment on Mars – and here it is.”

Ingenuity even carries a small piece of fabric from one of the wings of the Wright Brothers’ Flyer 1, which made that historic flight 118 years ago.

The drone was carried to Mars by Nasa’s Perseverance Rover, which landed in the planet’s Jezero Crater in February. 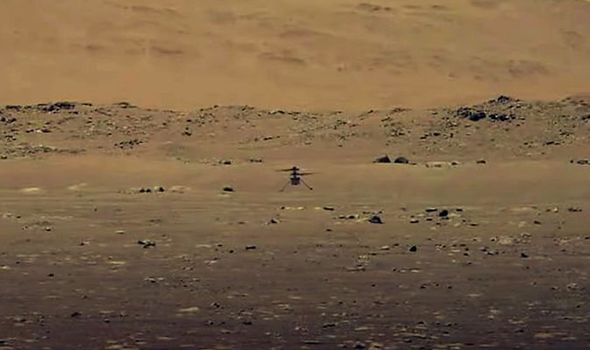 Yesterday’s pioneering flight saw the copter rise to about 10ft, hover, swivel and then land within 40 seconds.

Mars is some 186million miles away, making it impossible for it to be piloted from Earth so the voyage had to be pre-programmed.

Now a further four flights will be attempted over the coming days – each one further than the last.

But the long-term hope is that this first journey on Mars could eventually transform how we explore distant worlds.

Dr Thomas Zurbuchen, Nasa head of science, said: “We will be able to explore areas where we cannot use a rover.” The space agency has approved a helicopter mission to Titan – the largest moon of Saturn – in the mid-2030s.