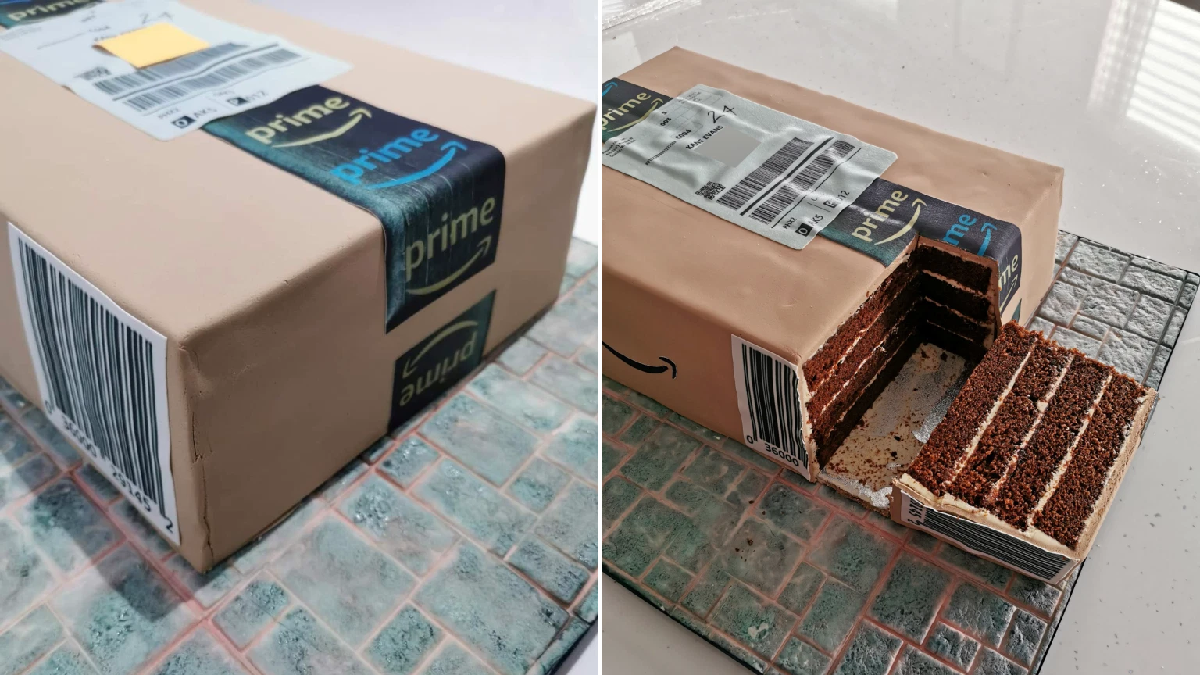 Typically if you’re greeted by a plain old Amazon box on your birthday, you’re going to feel a little let-down.

Yes, whatever’s inside might be lovely, but did the gift-giver really not have the time to wrap the box? Don’t they care enough to make a bit of effort?

That’s because it’s not actually just a hastily ordered present that’s been ordered the day before.

It’s a super-realistic chocolate cake, lovingly crafted by Nina Evans Williams, 54, for her son, Kane Evans, for his 24th birthday.

The cake, which took two days to make, managed to fool Kane when he woke up on his big day, as he thought it was just a ‘boring parcel’ until he took a closer look.

Cake designer Nina, from Anglesey, Wales, said: ‘He actually thought it was a package delivered for him!

‘He gets deliveries quite often, almost weekly – and he’s known for that especially during lockdown – so I thought that would be a fantastic.

‘This year he didn’t want a Liverpool Football Club cake, so I told him it was a surprise,

‘The day before, I banned him from the cake cabin so he didn’t see it until his actual birthday.’

The mum who runs Nina’s Cake Cabin added: “He came into the cabin and I said there was a boring parcel for him on the table and when he got closer he was like “oh my god!”‘

The 15 x 10 x 5 inch cake took a whole day to bake in the oven, and another day to ice it and add finishing touches.

It’s incredibly impressive, with every detail considered – from the Amazon branded ‘tape’ and slightly wrinkled label to the fake floor the cake sits on.

Honestly, we’d only have figured out it was a cake once we tried to wrestle open the box.

But just look at the inside and you’ll see that yes, this is in fact a cake.

Anyone else suddenly craving a delivery?