The Oscars are a perfect date night, but not everyone is lucky enough to attend with an invited guest. In celebration of the 2021 Academy Awards on April 25, 2021, Wonderwall.com is taking a look back at the most memorable Oscar dates who still stand out… Starting with Bennifer. Jennifer Lopez and Ben Affleck attended the 75th Annual Academy Awards together in 2003, and they were not shy with the PDA. Keep reading for more…

You could say model Cindy Crawford felt like a pretty woman when she attended the 63rd Annual Academy Awards in 1991 on the arm of future ex-husband Richard Gere.

In 1989, teenagers Drew Barrymore and Corey Feldman attended the 61st Annual Oscars together. It’s hard to believe they briefly dated!

RELATED: Stars at their earliest Oscars

Elizabeth Taylor walked the 1961 Academy Awards red carpet with then-husband Eddie Fisher. She took home the best actress Oscar that night for her work in “Butterfield 8” and the following year started an affair with Richard Burton on the set of “Cleopatra.”

Heath Ledger and Michelle Williams looked picture perfect together at the 2006 Academy Awards, where both were nominated for their acting work in “Brokeback Mountain.” The couple, who’d welcomed daughter Matilda just a few months earlier in 2005, called it quits the following year shortly before Heath’s death from an accidental drug overdose.

Remember when Jennifer Aniston dated John Mayer? John even spoke to Ryan Seacrest about how he was nervous about going to the 81st Annual Academy Awards with his girlfriend. “It’s not my world, the Oscar thing,” he said on Ryan Seacrest’s KIIS-FM radio show in February 2009. “You can go from a Grammy winner to a water boy when you walk in the Kodak Theatre on Oscar night,” he added. “That’s just like a whole different level.” He also said that he went for “moral support,” as Jennifer was there as a presenter.

Gwyneth Paltrow and Brad Pitt looked like Hollywood royalty when they arrived at the 68th Academy Awards in 1996 (they got engaged nine months later). In January 2015, Gwyneth reflected on the failed relationship on Howard Stern’s SiriusXM radio show. “I definitely fell in love with him,” she recalled. “He was so gorgeous and sweet. I mean, he was Brad Pitt!”

Angelina Jolie took brother James Haven to the 72nd Annual Academy Awards in 2000, and he was one of her most memorable dates ever: Remember when she kissed him on the lips that year?

Ellen DeGeneres and then-girlfriend Anne Heche took their relationship public at the 71st Annual Academy Awards in 1999. The pair met at the Vanity Fair Oscar Party two years earlier and split in 2000.

Arguably the world’s biggest stars at the time, Madonna and Michael Jackson, caused quite a stir when they showed up at the 1991 Academy Awards together. “Michael was like, ‘Well, who are you gonna go with?’ I looked at him and said, ‘I don’t know. You wanna go?’ And he said, ‘Yeah, that’d be great,'” Madge told reporters. “And then, yes, he took me home. You wanna know what happened after that? I’m not gonna tell you.” She later called MJ her “best date ever” in a post on Instagram.

Julia Roberts couldn’t have looked happier at the 2001 Academy Awards, where she took home the best actress Oscar for her performance in “Erin Brockovich” with then-boyfriend Benjamin Bratt by her side.

Hollywood icons Humphrey Bogart and Lauren Bacall were inseparable at the 1952 Academy Awards, where he won for best actor for his performance in “The African Queen.” They were together until Humphrey’s death in 1957.

Cher dazzled at the 1973 Academy Awards, which she attended with then-hubby Sonny Bono. The musical duo split two years later.

Joanne Woodward and Paul Newman were newlyweds when they attended the 1958 Academy Awards together. Joanne walked away with the best actress Oscar that night for her work in “The Three Faces of Eve.” They deeply devoted couple were married for 50 years until Paul’s death in 2008.

Hugh Grant brought model-actress Elizabeth Hurley to the Oscars in 1995. The two dated from 1987 to 2000 but are friends till this day. “He is annoying,” she told “Access Hollywood” in 2015. “But I annoy him too. I mean, it’s a mutual annoyance. But we love each other a lot.”

Angelina Jolie made the ultimate fashion statement (the infamous leg pose!) with then-husband Brad Pitt by her side at the 2012 Academy Awards.

Ben Affleck and Matt Damon’s mothers were good luck charms at the 1998 Academy Awards. The longtime friends and first-time nominees won the best screenplay Oscar for “Good Will Hunting” with their proud moms, Chris Affleck and Nancy Carlsson-Paige, looking on.

Oprah Winfrey and her fiancé, Stedman Graham, looked glamorous at the 1987 Academy Awards, which they attended hand in hand. They’re still together more than three decades later though they never did get married.

Laura Dern shared her red carpet spotlight with dad Bruce Dern at the 87th Annual Academy Awards in 2015. “I was [8],” Laura told Ryan Seacrest of her first Oscars experience. “I came with my mother [Diane Ladd], who was nominated for [the] Scorsese film ‘Alice Doesn’t Live Here Anymore.’ And I was as terrified as my children probably feel right now, who are here with me and their grandfather tonight.” Laura was nominated in 2014 for best supporting actress for her work in “Wild,” and her father was nominated the year before for his performance in “Nebraska.” Between Laura and her parents, there are eight Oscar noms in the family (and one win — Laura won for her work in “Marriage Story” in 2020).

Despite rumblings of relationship strife at the time, Bradley Cooper and Irina Shayk stepped out together at the 91st Annual Academy Awards in 2019. It was a big night for Bradley’s movie “A Star is Born” and his model girlfriend was along for the ride. But less than three months later, the couple called it quits.

At the 2020 Academy Awards, Scarlett Johansson — who earned two nods that year (best actress for her work in “Marriage Story” and best supporting actress for her performance in “Jojo Rabbit”) — attended with her fiancé, “Saturday Night Live” writer and star Colin Jost. They married later that year. 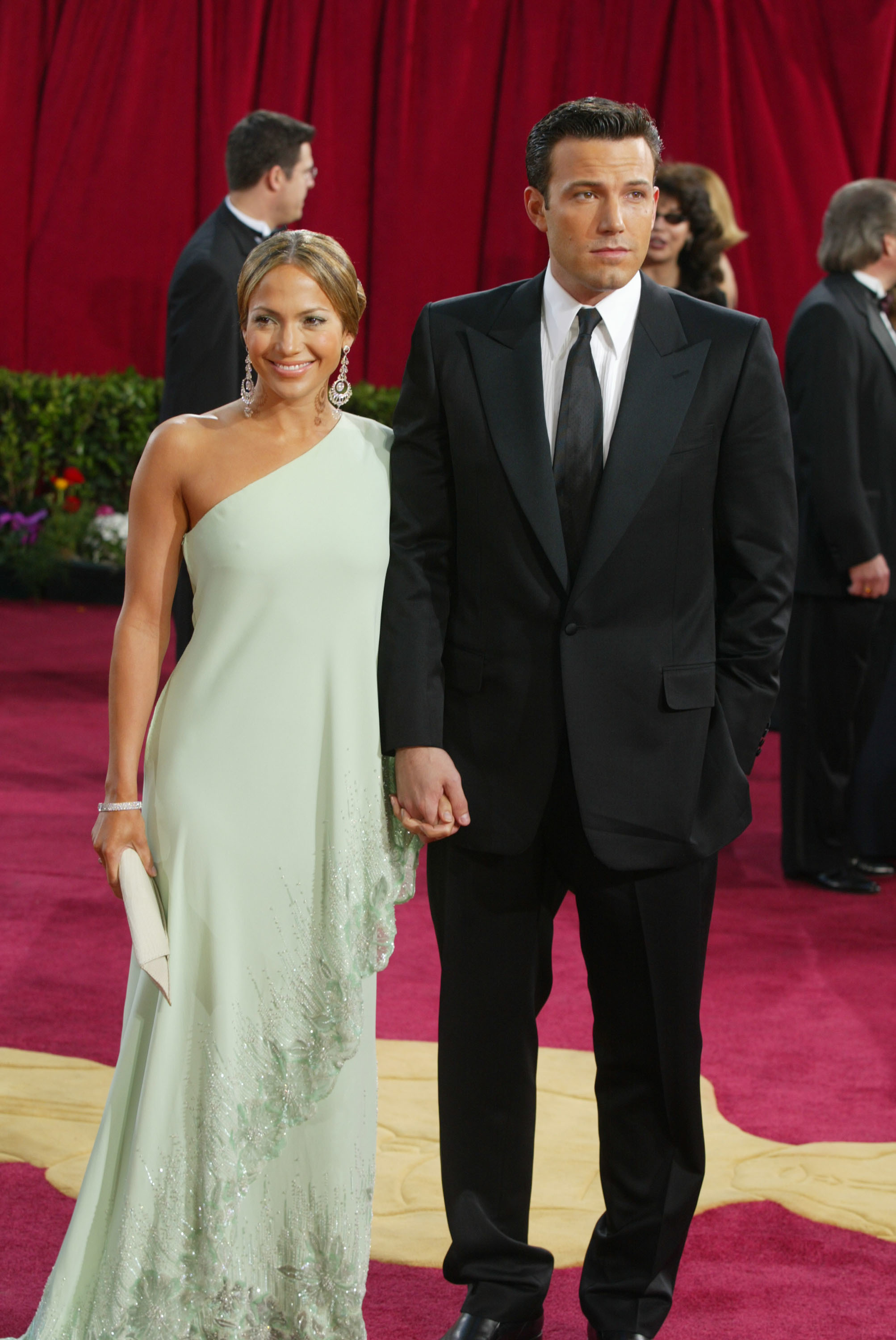 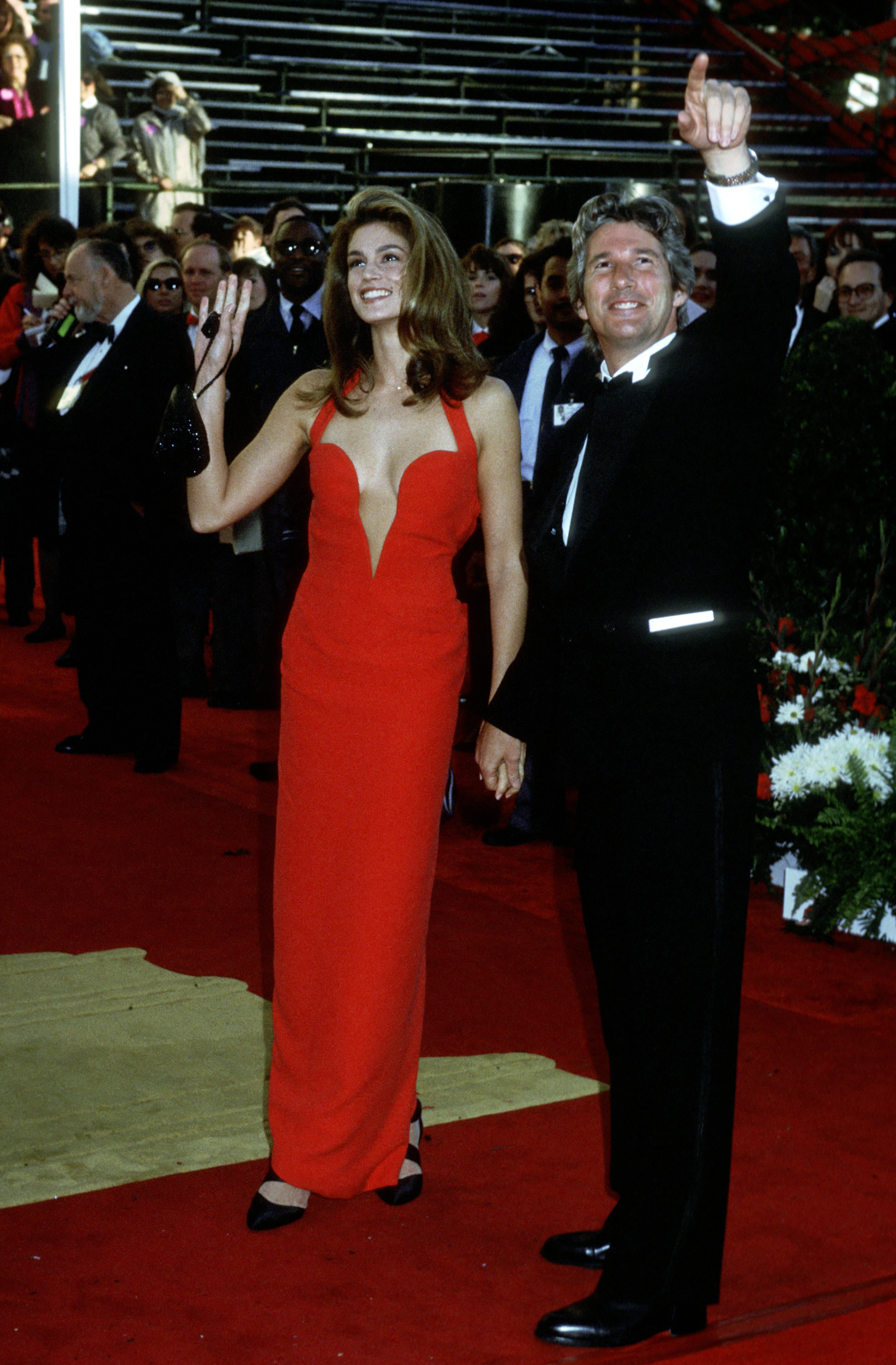 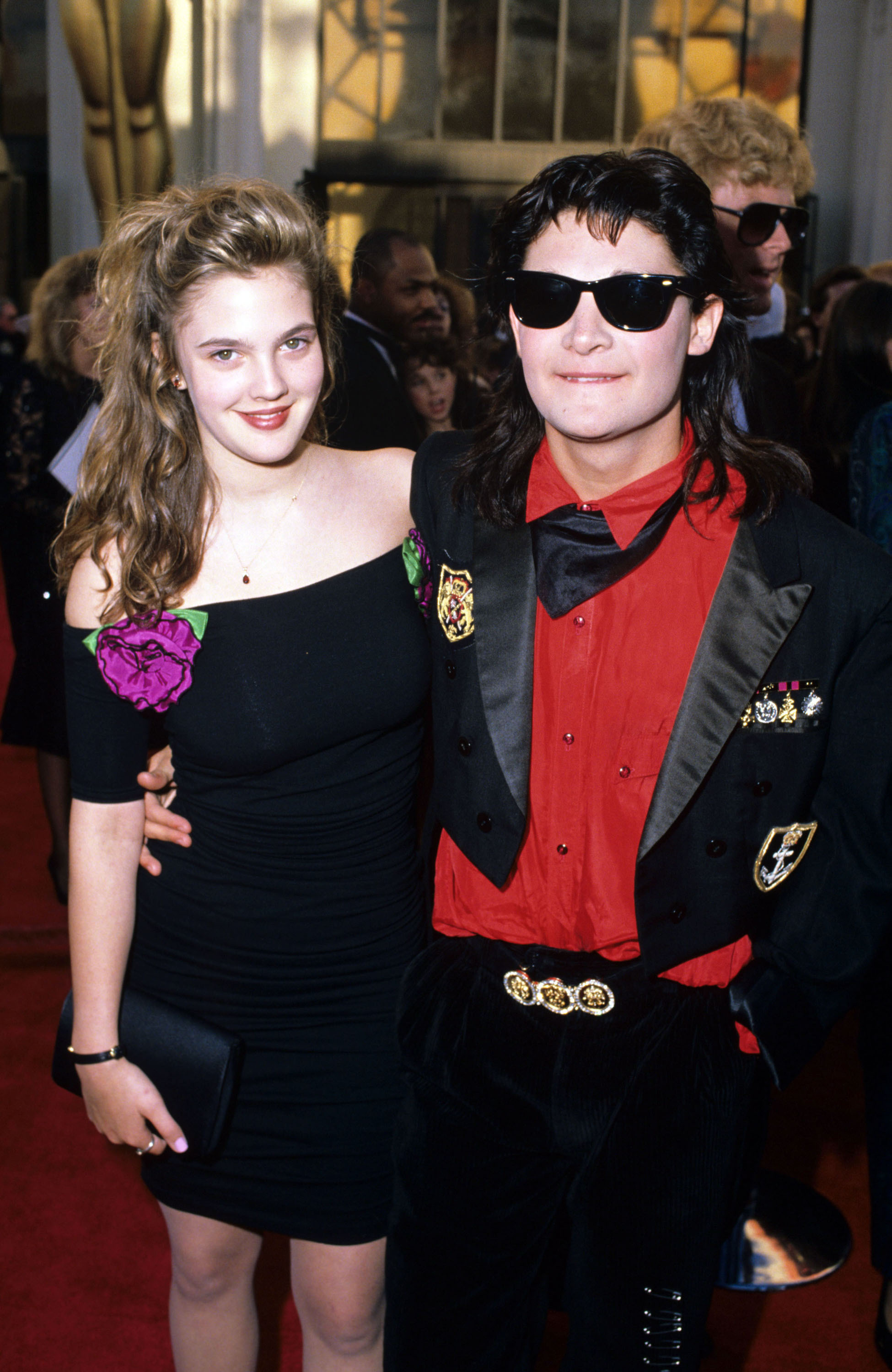 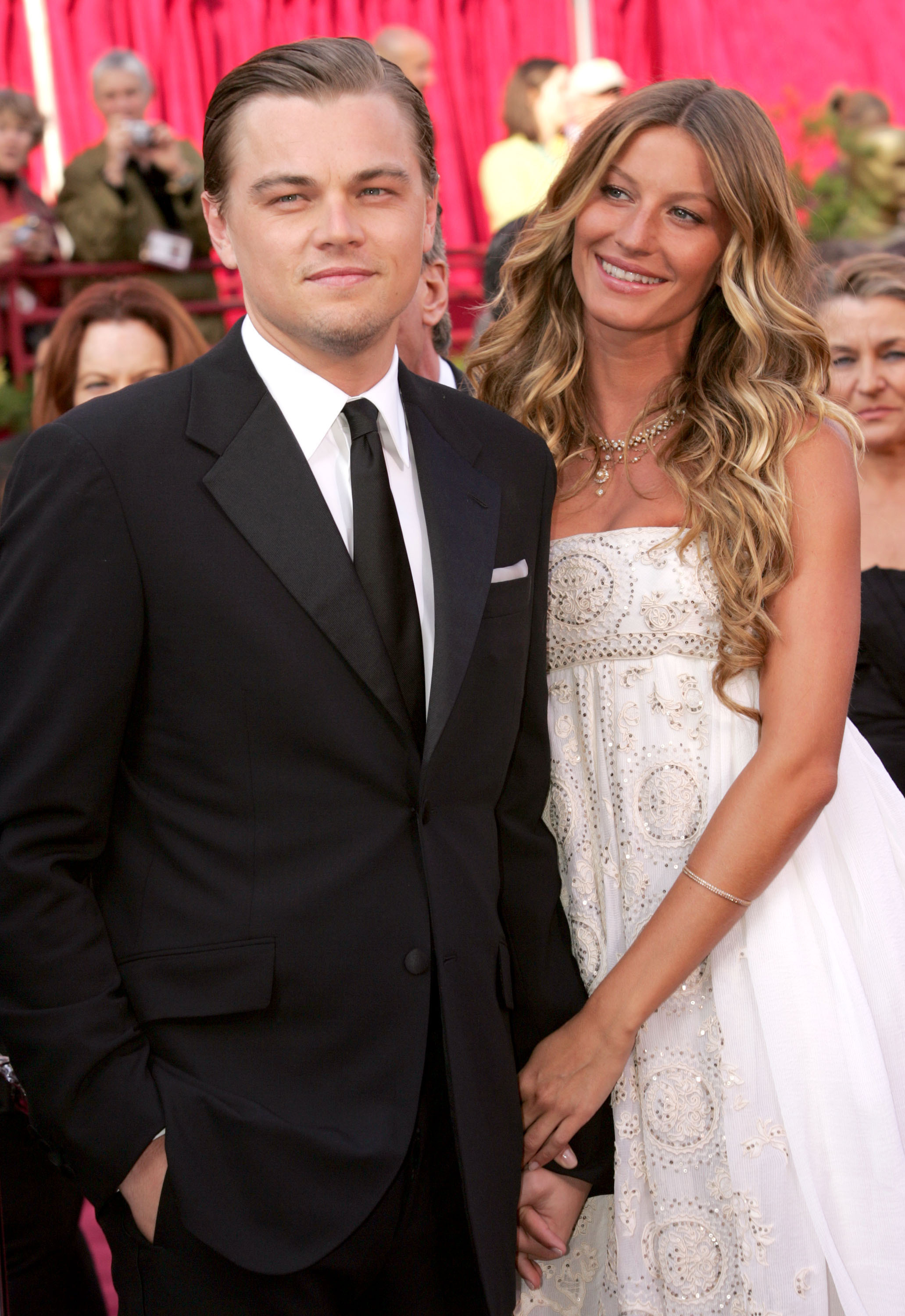 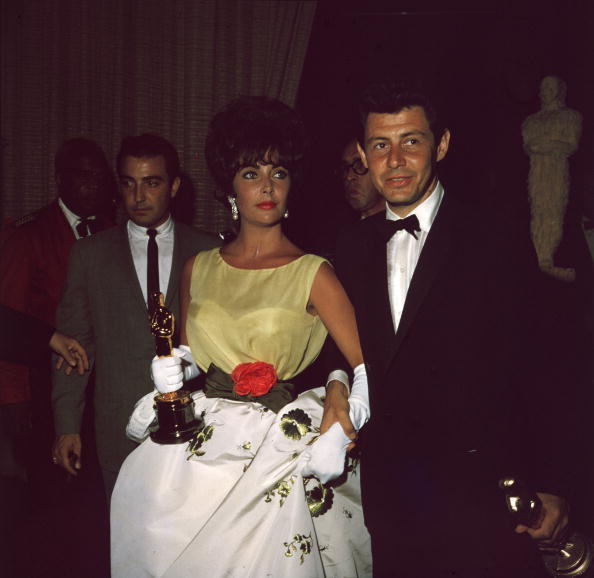 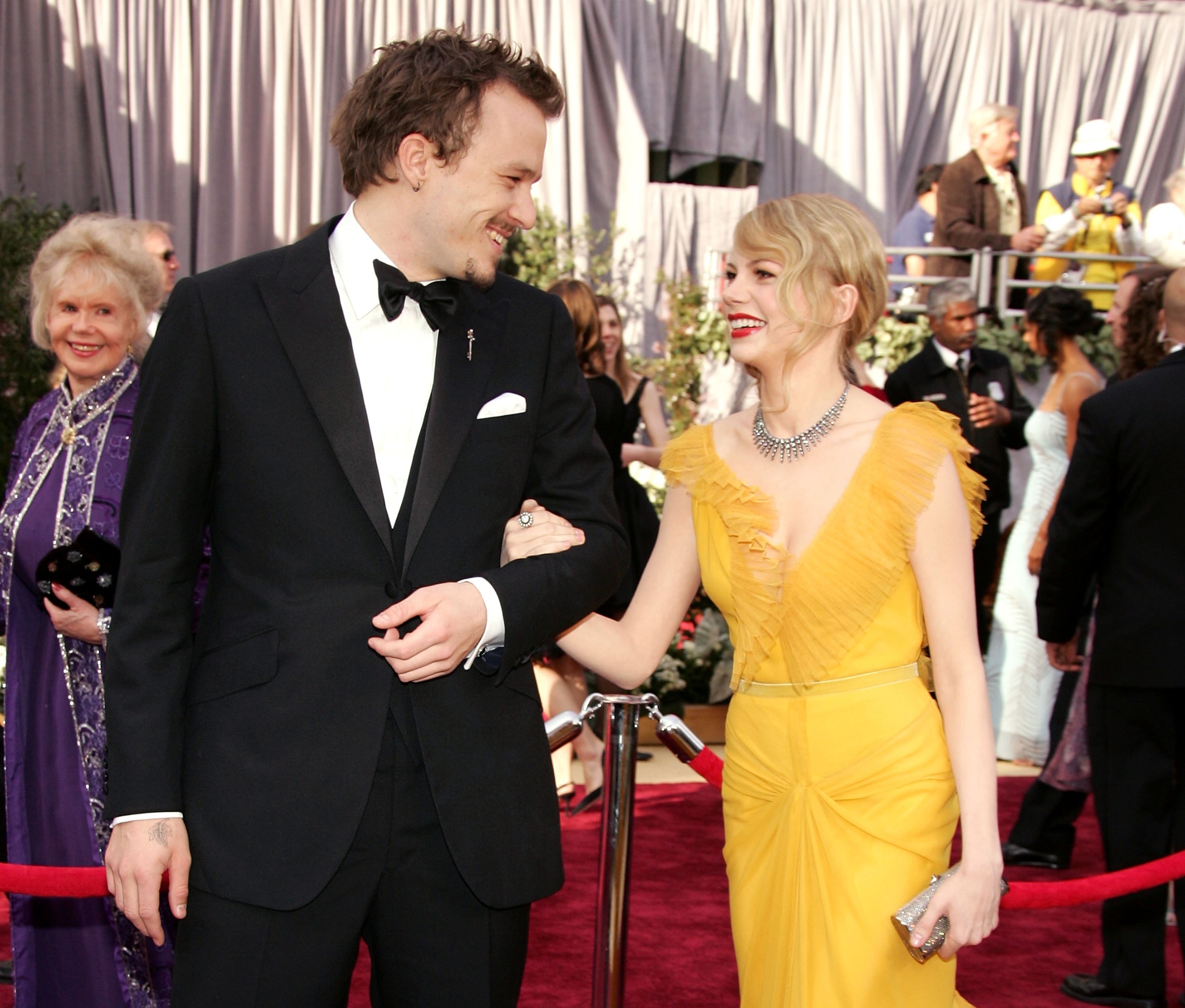 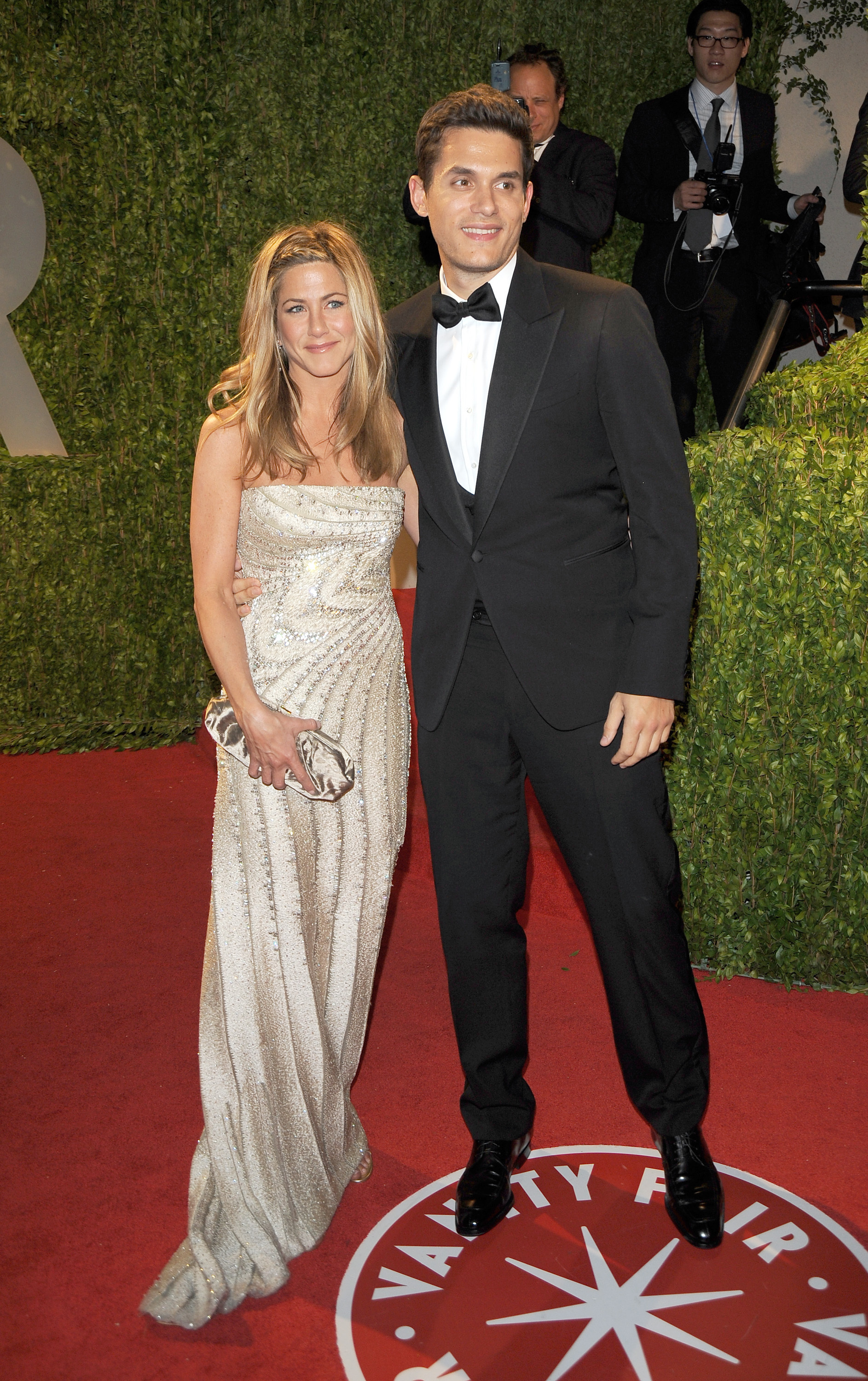 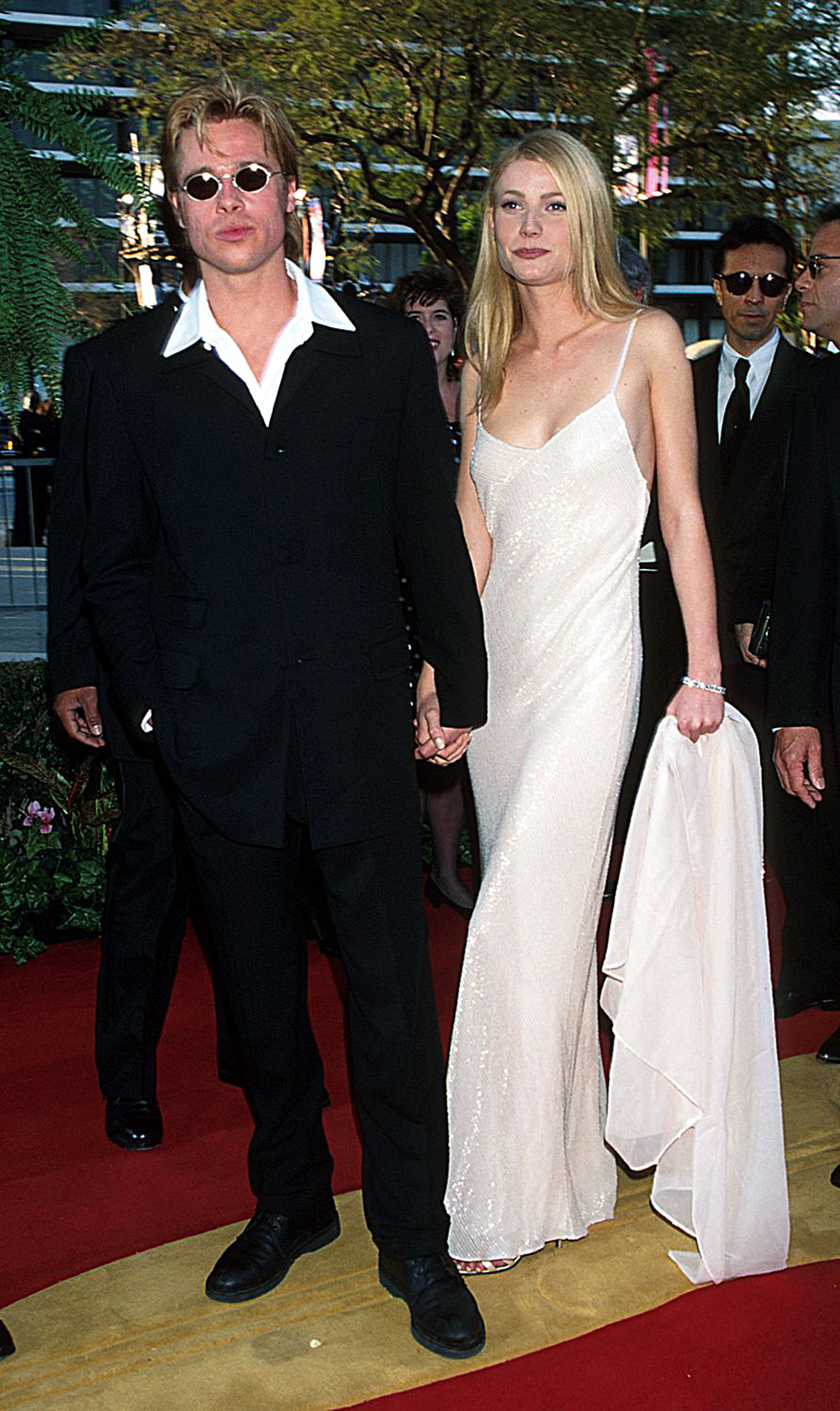 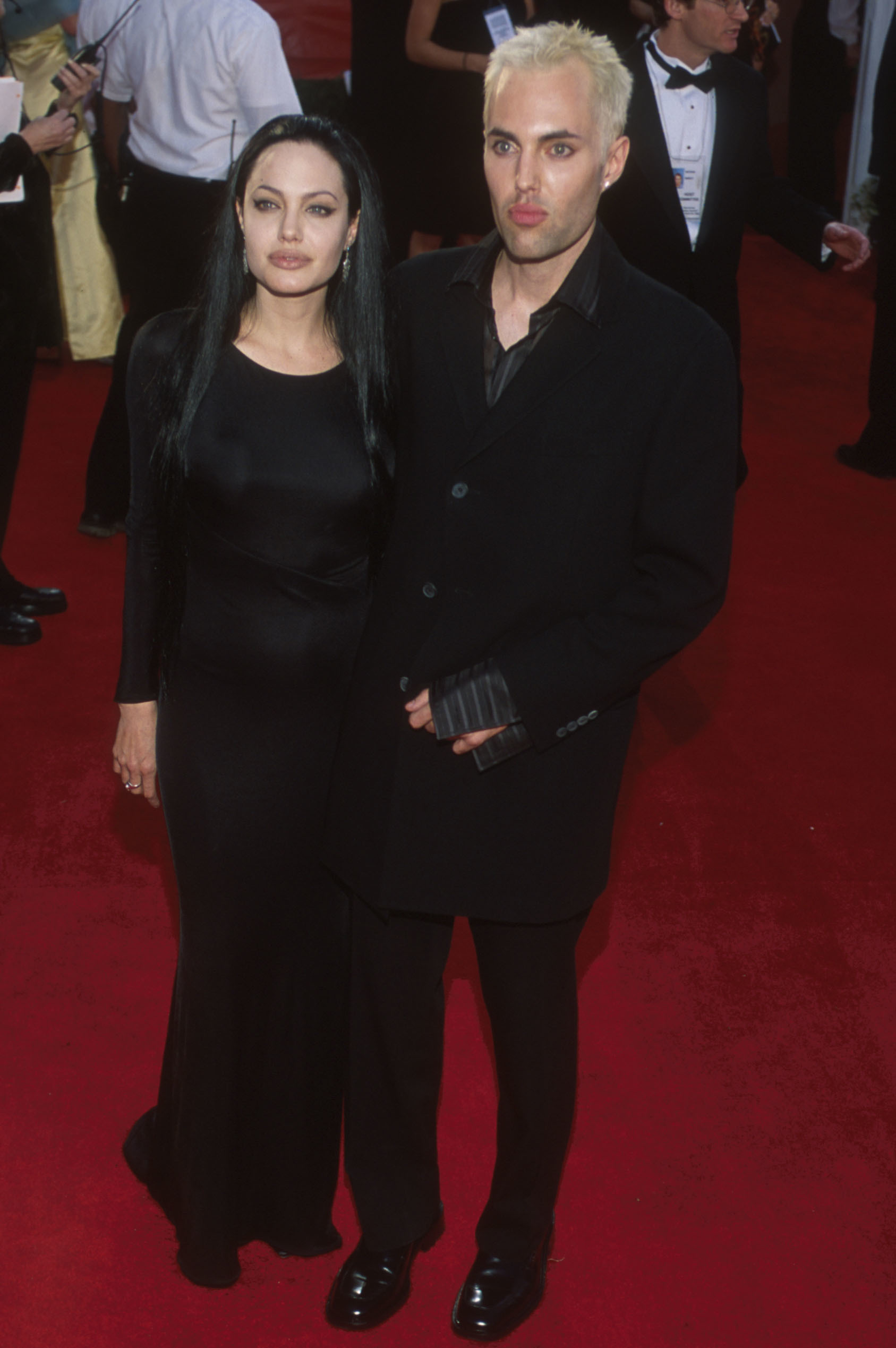 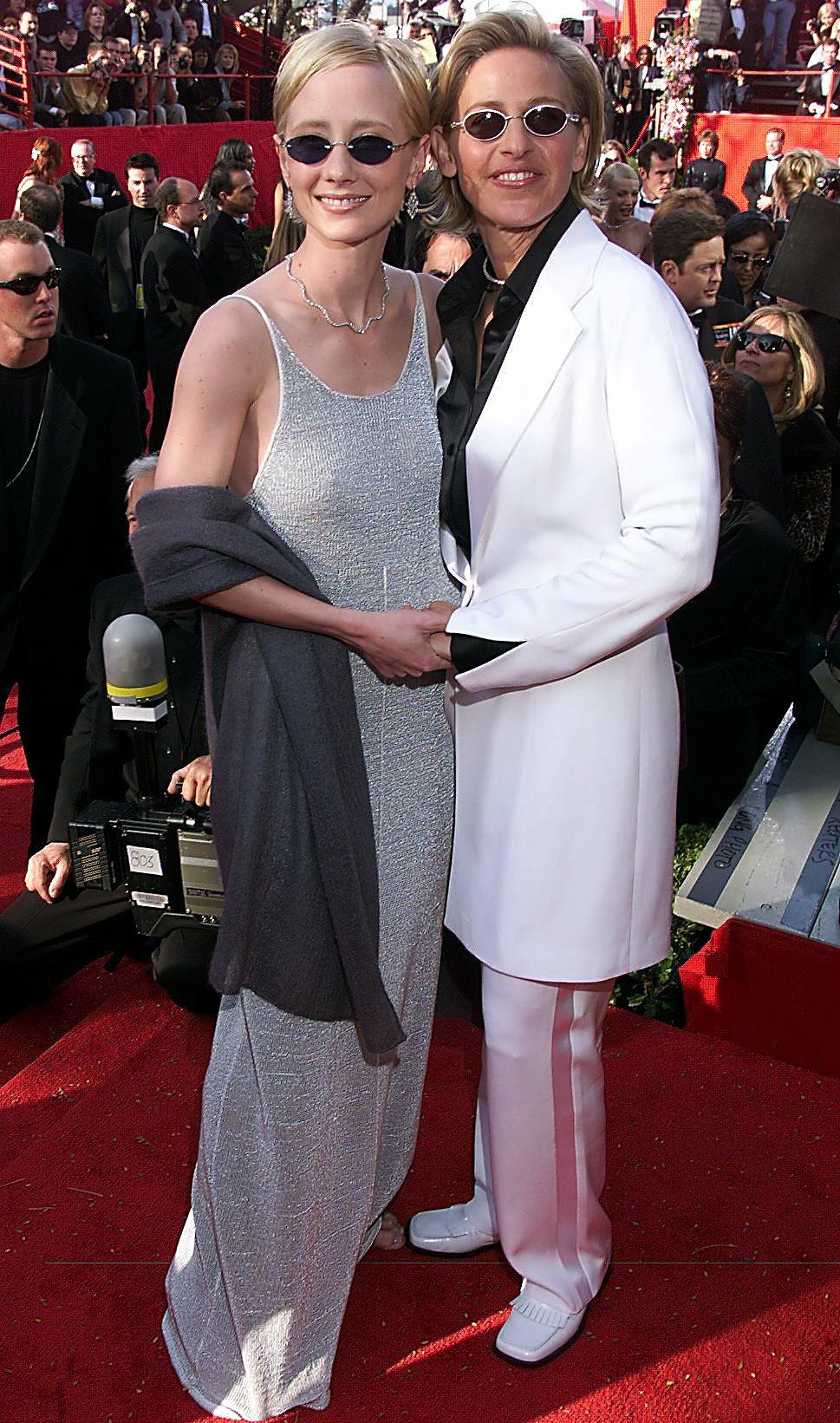 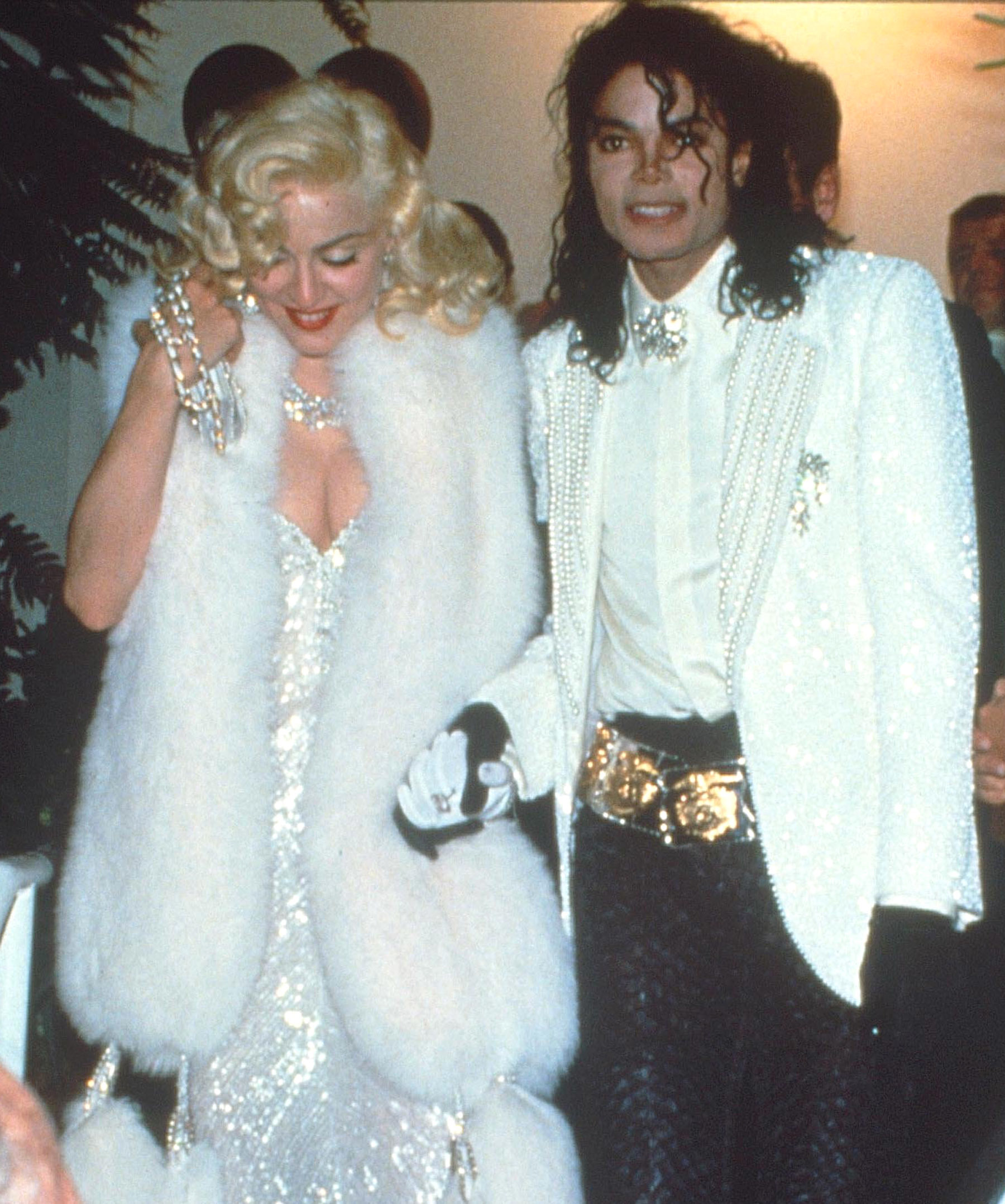 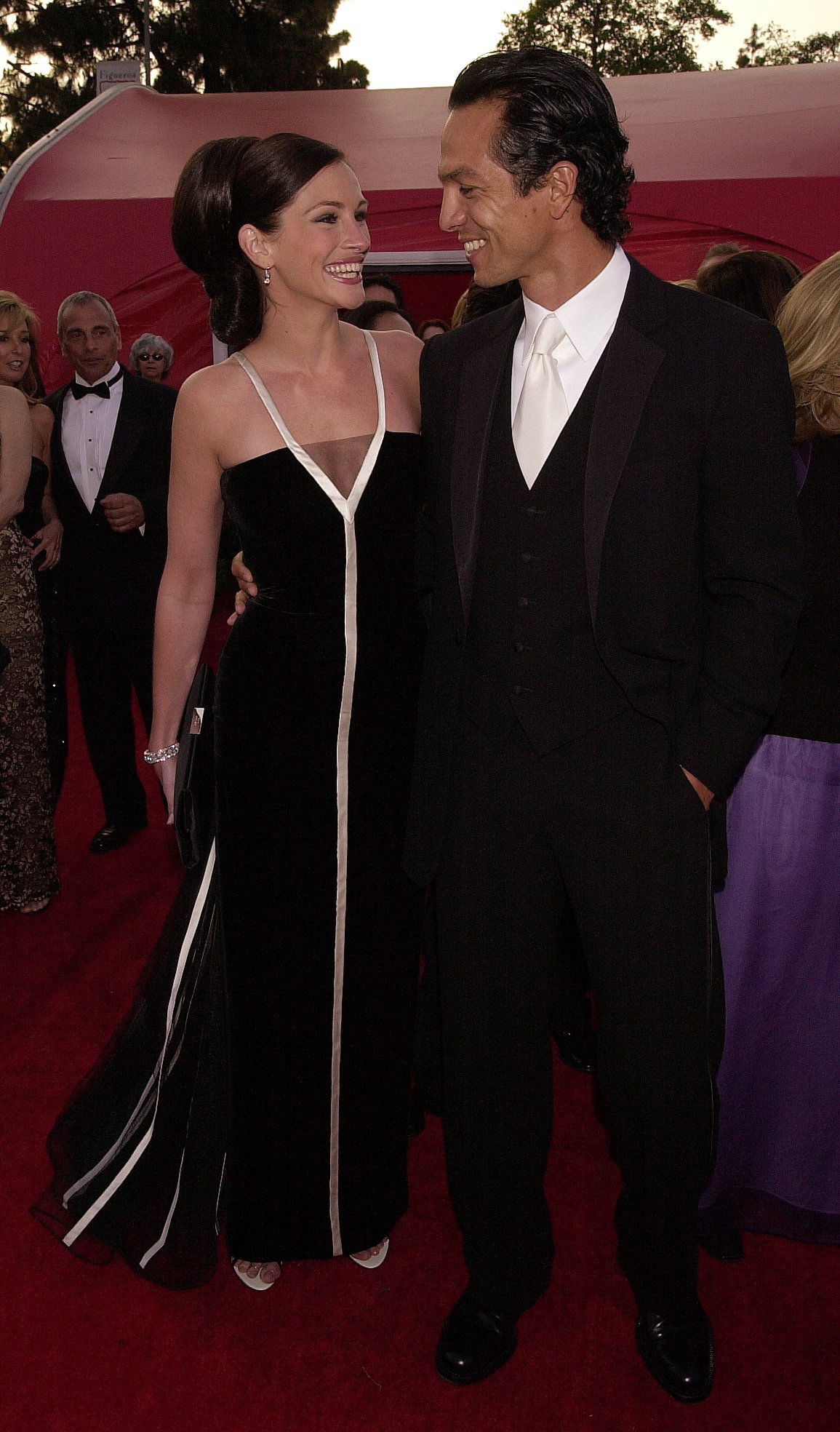 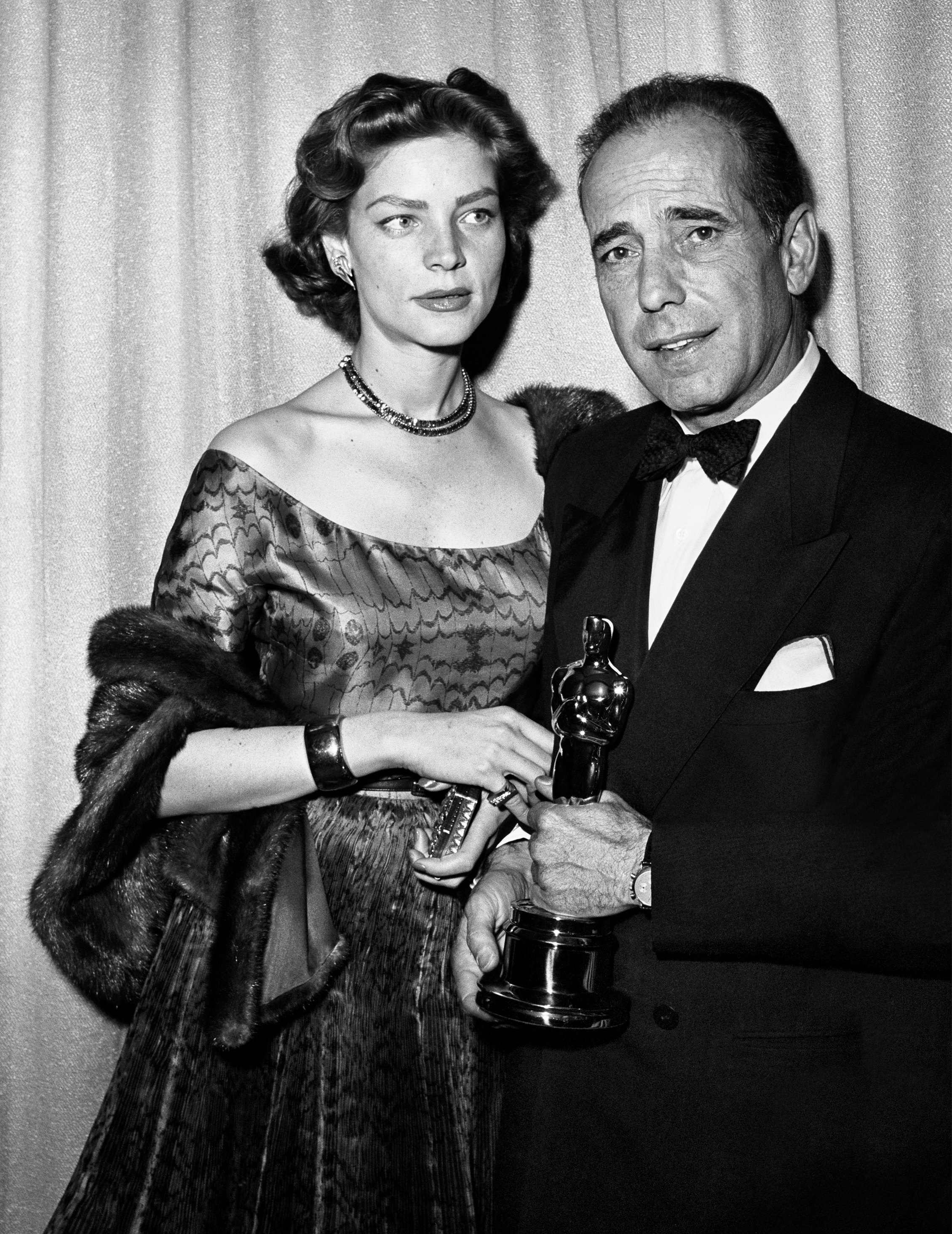 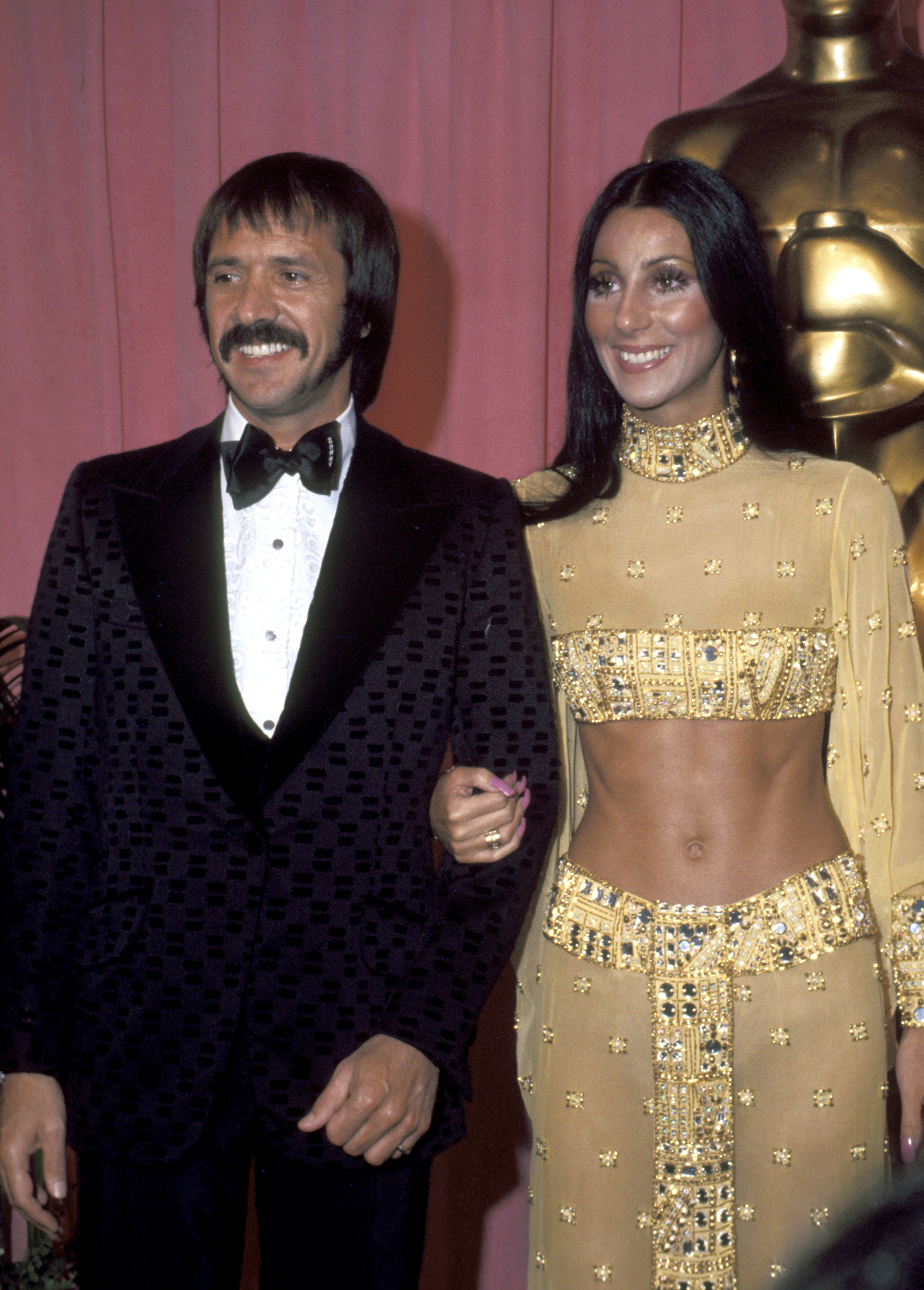 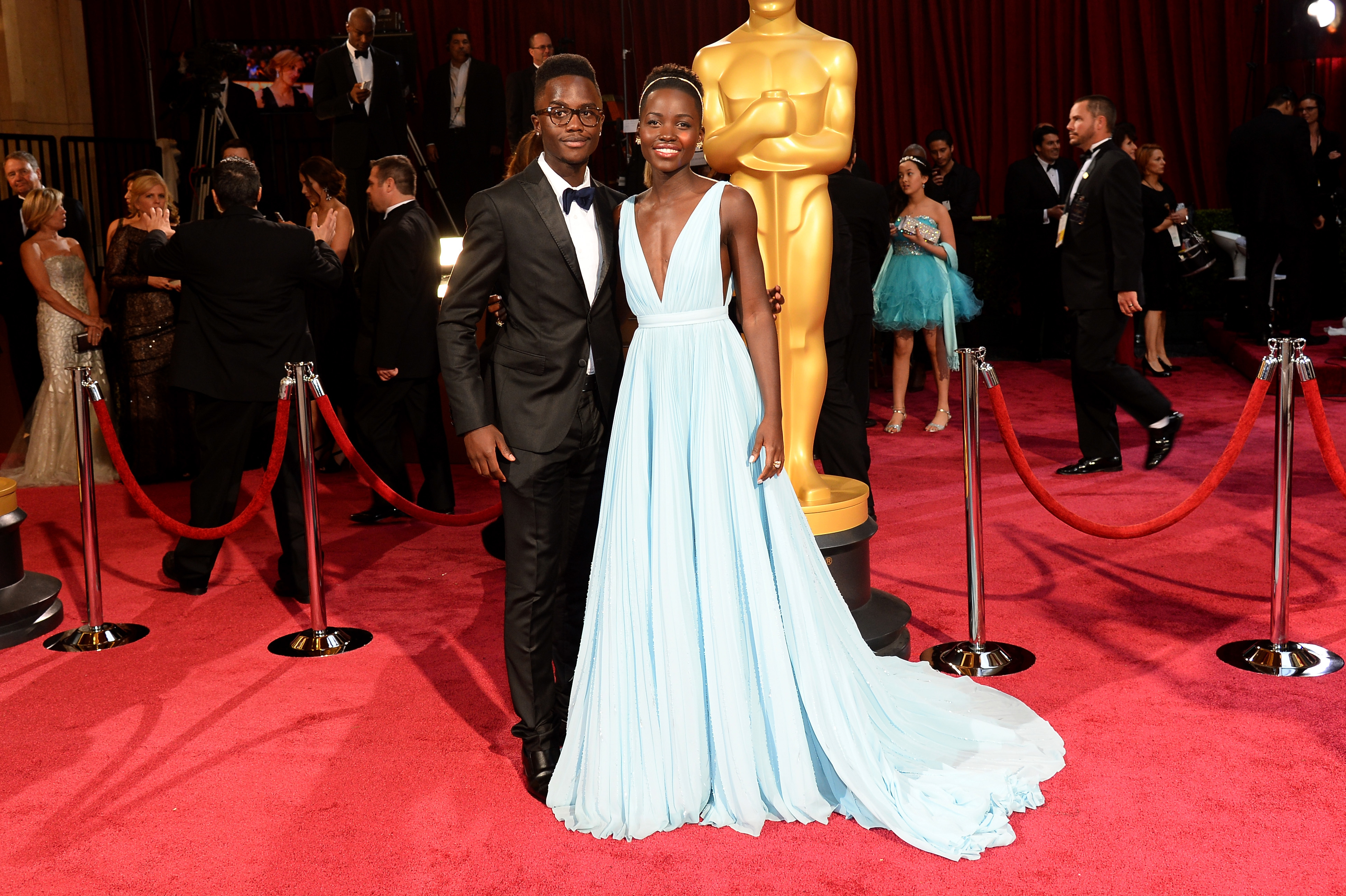 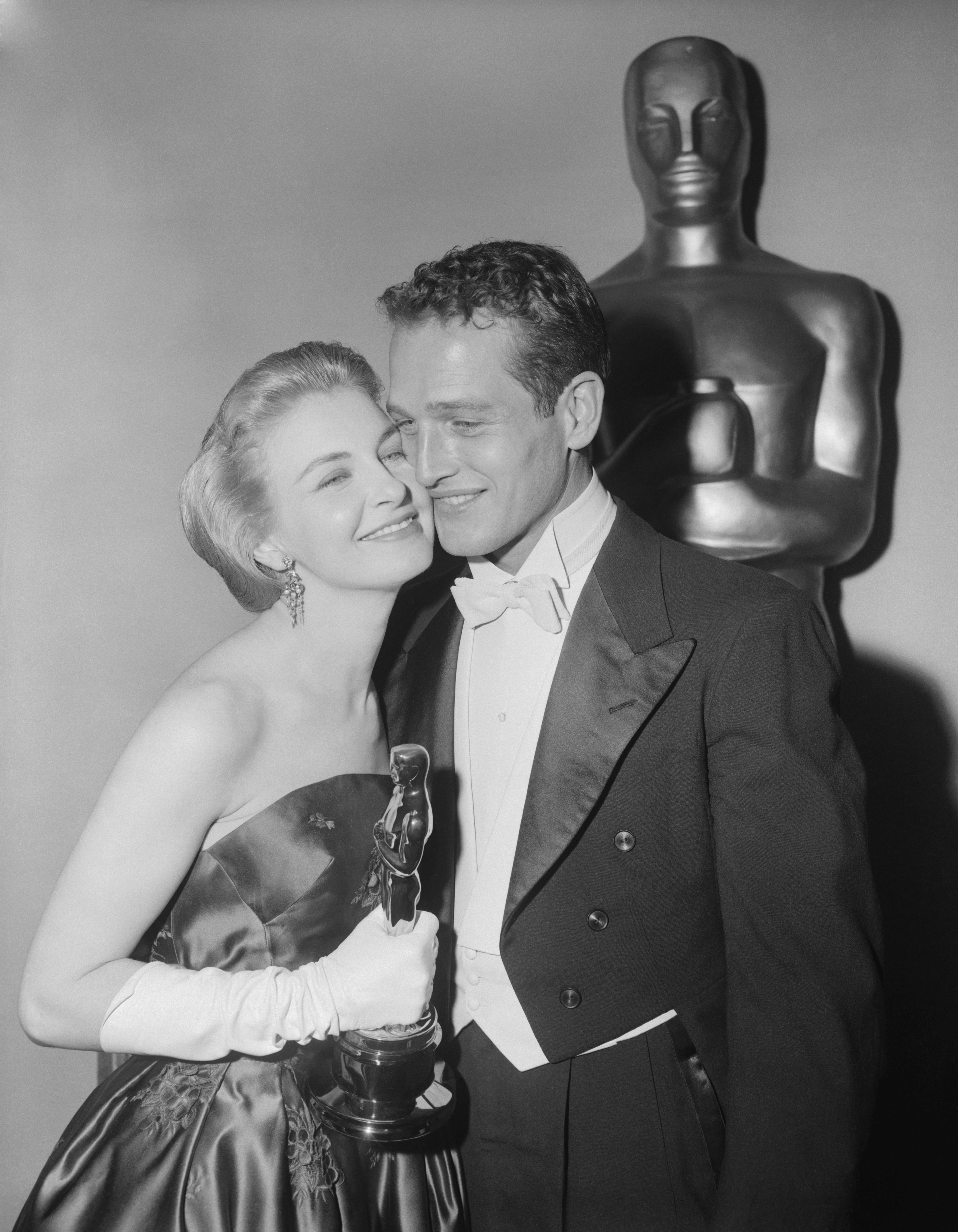 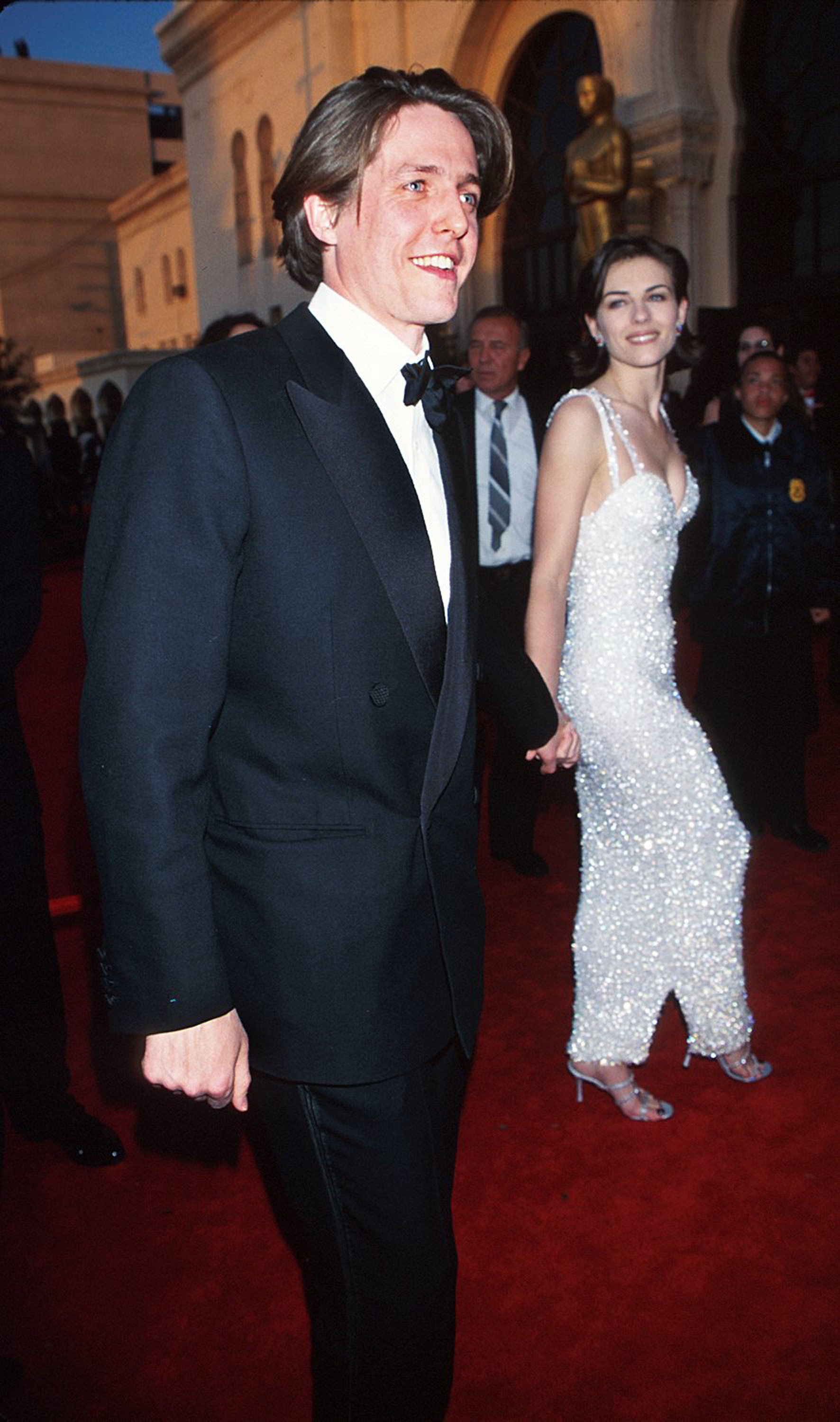 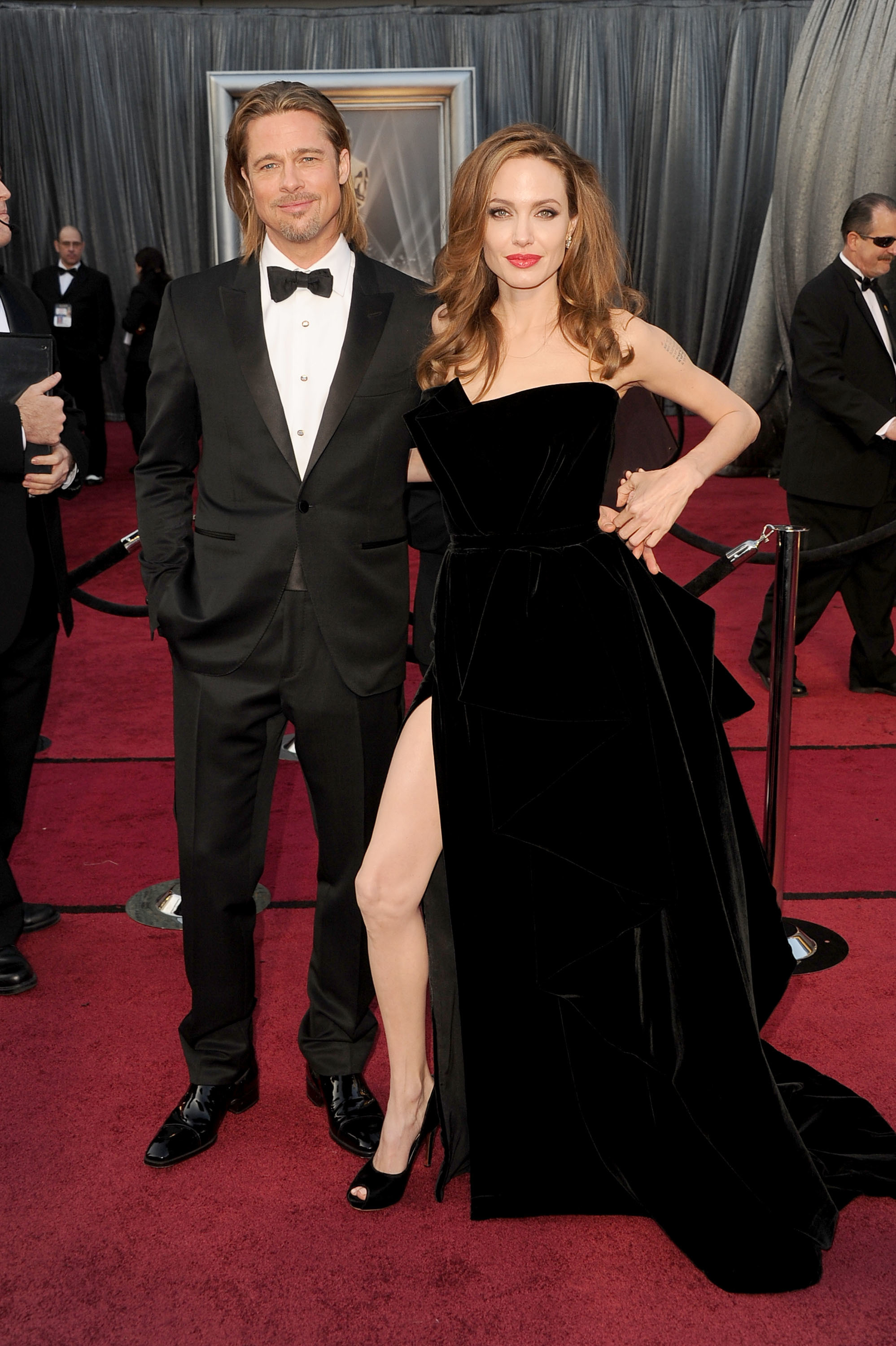 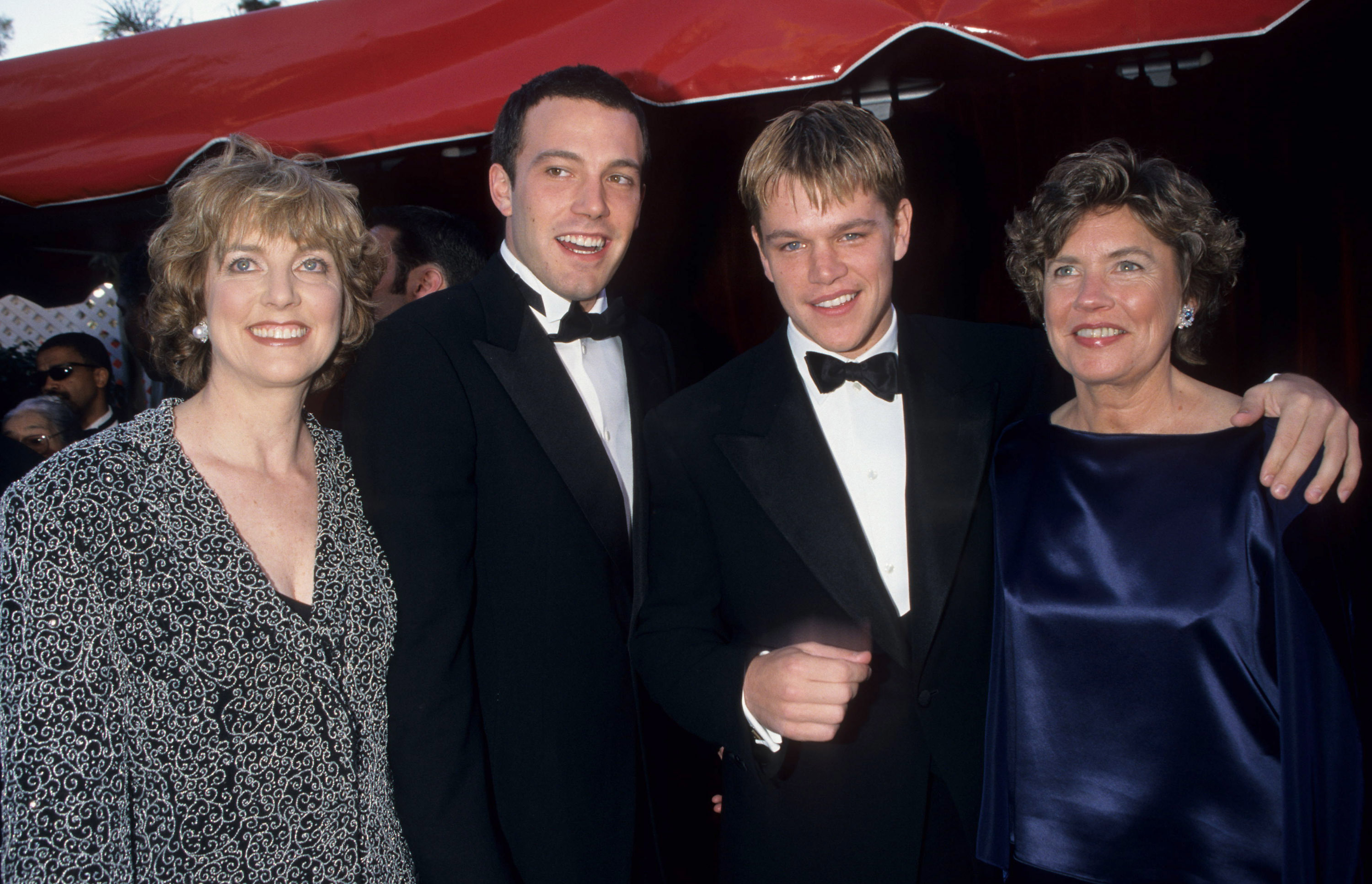 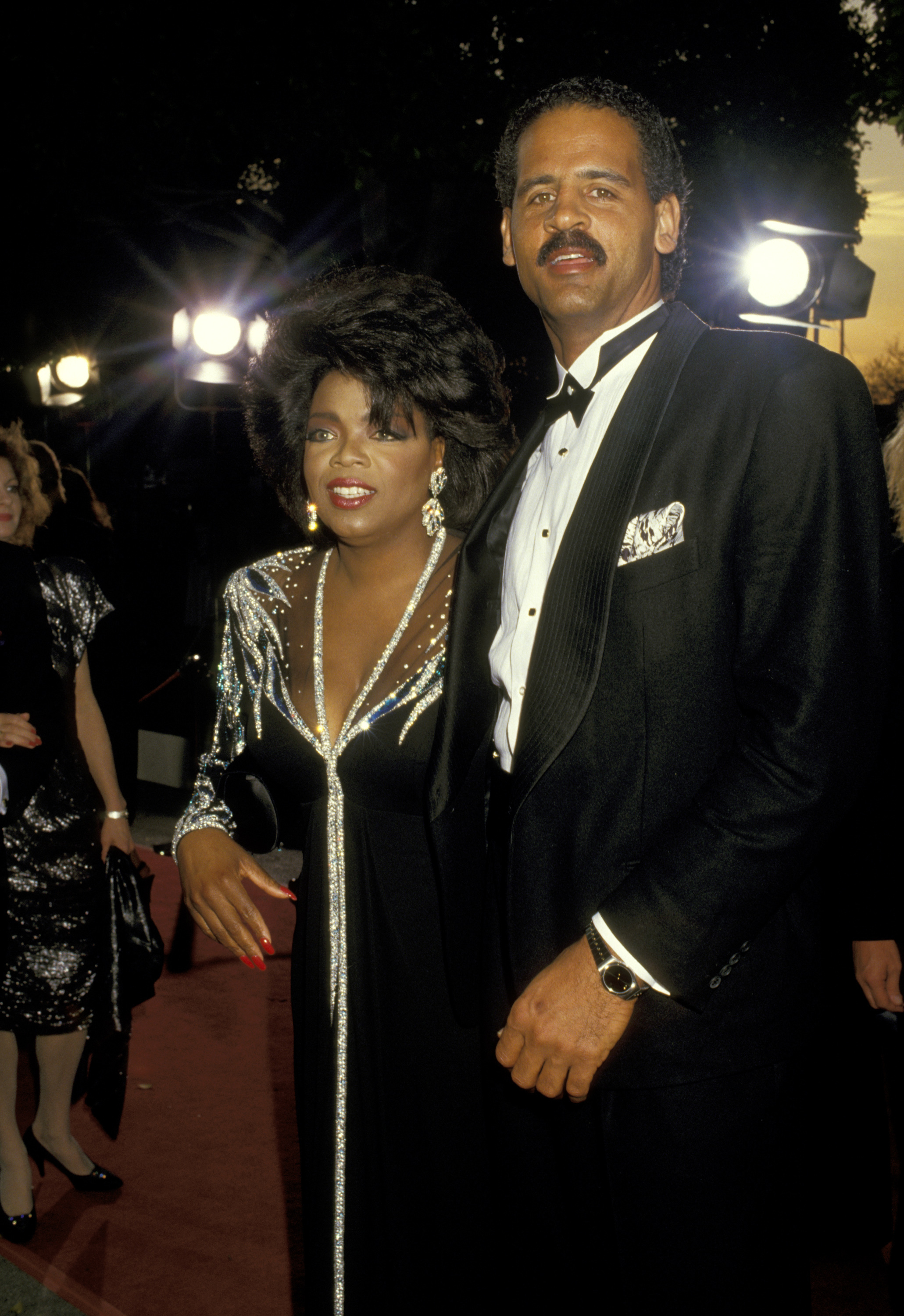 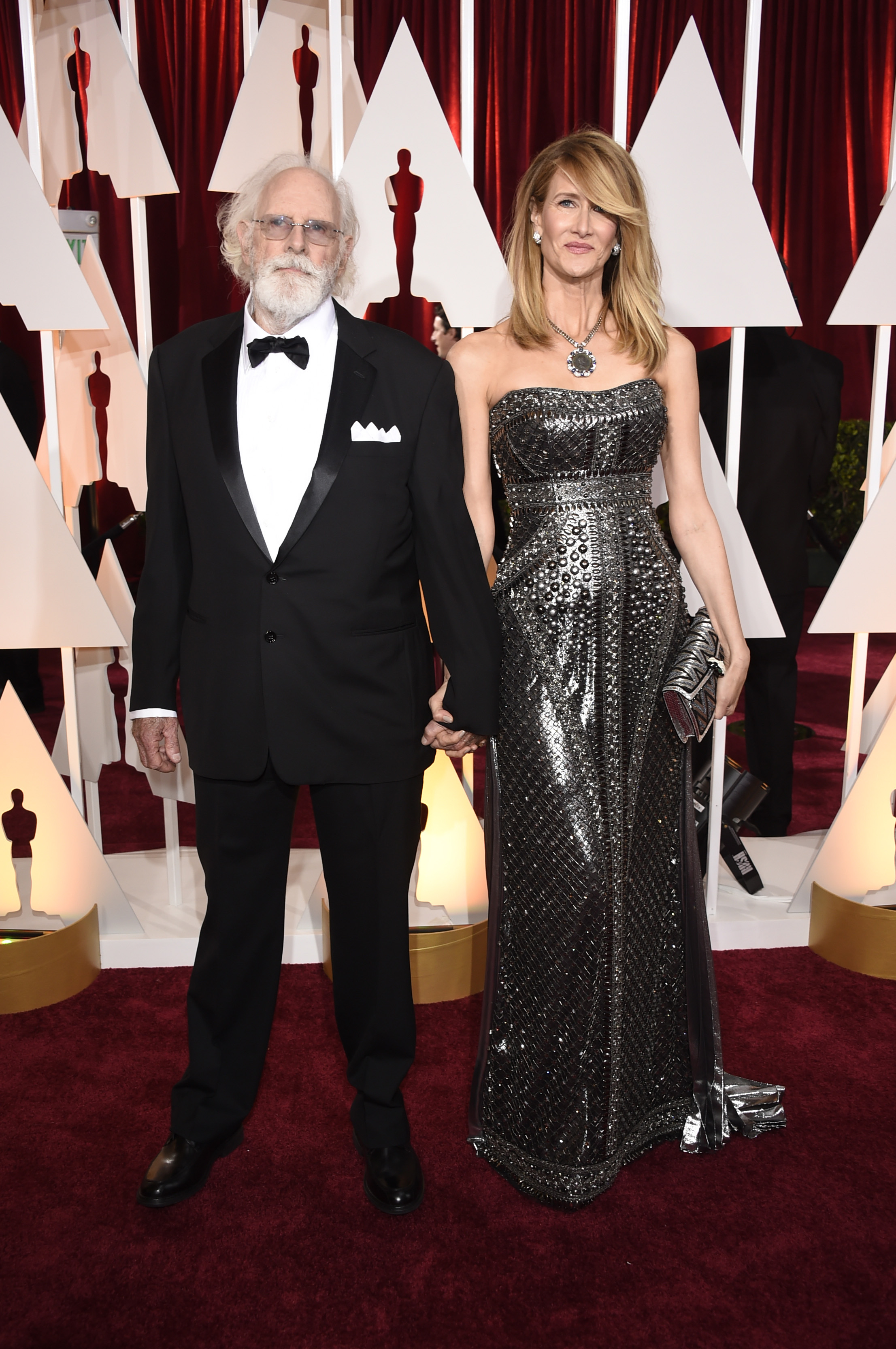 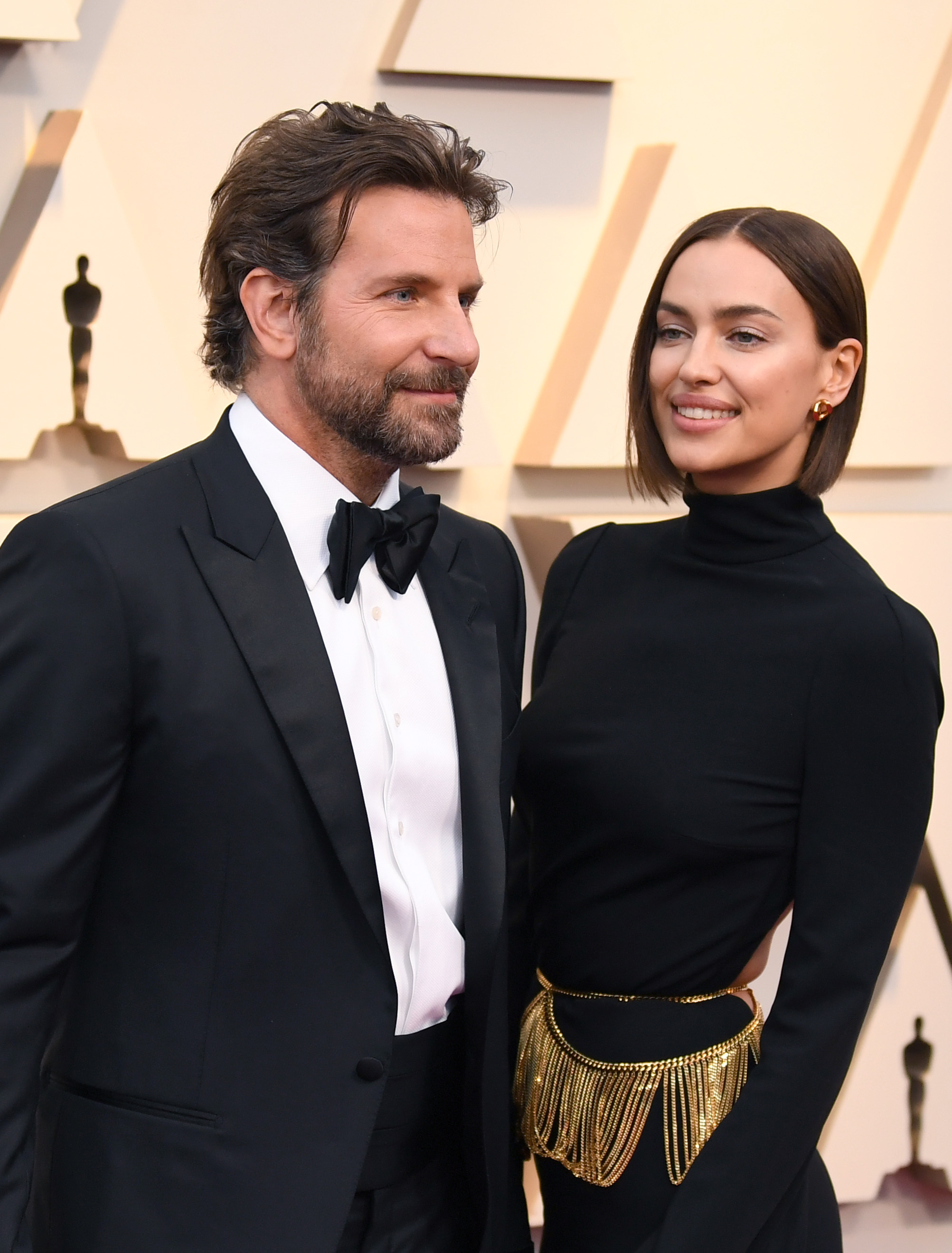 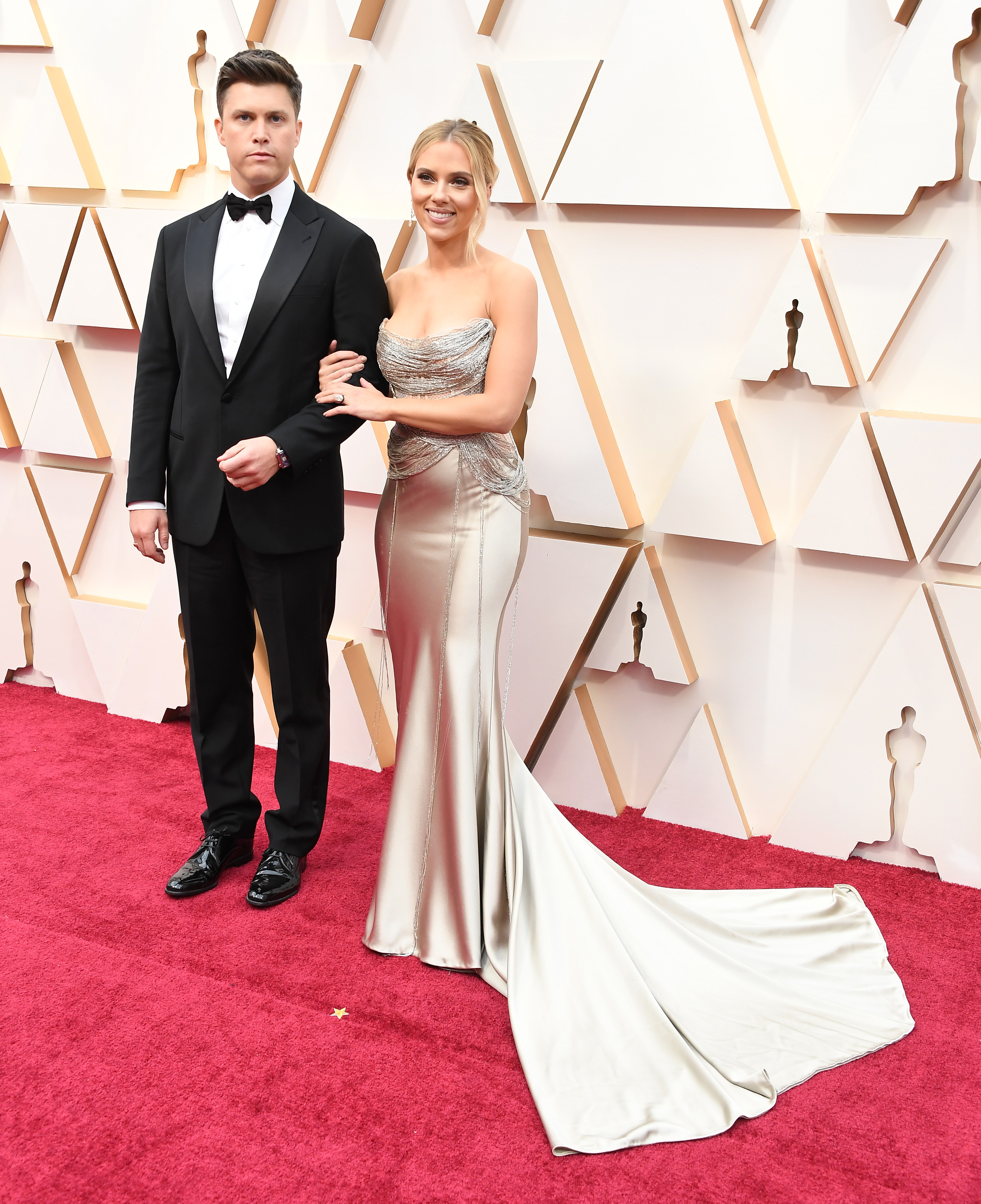 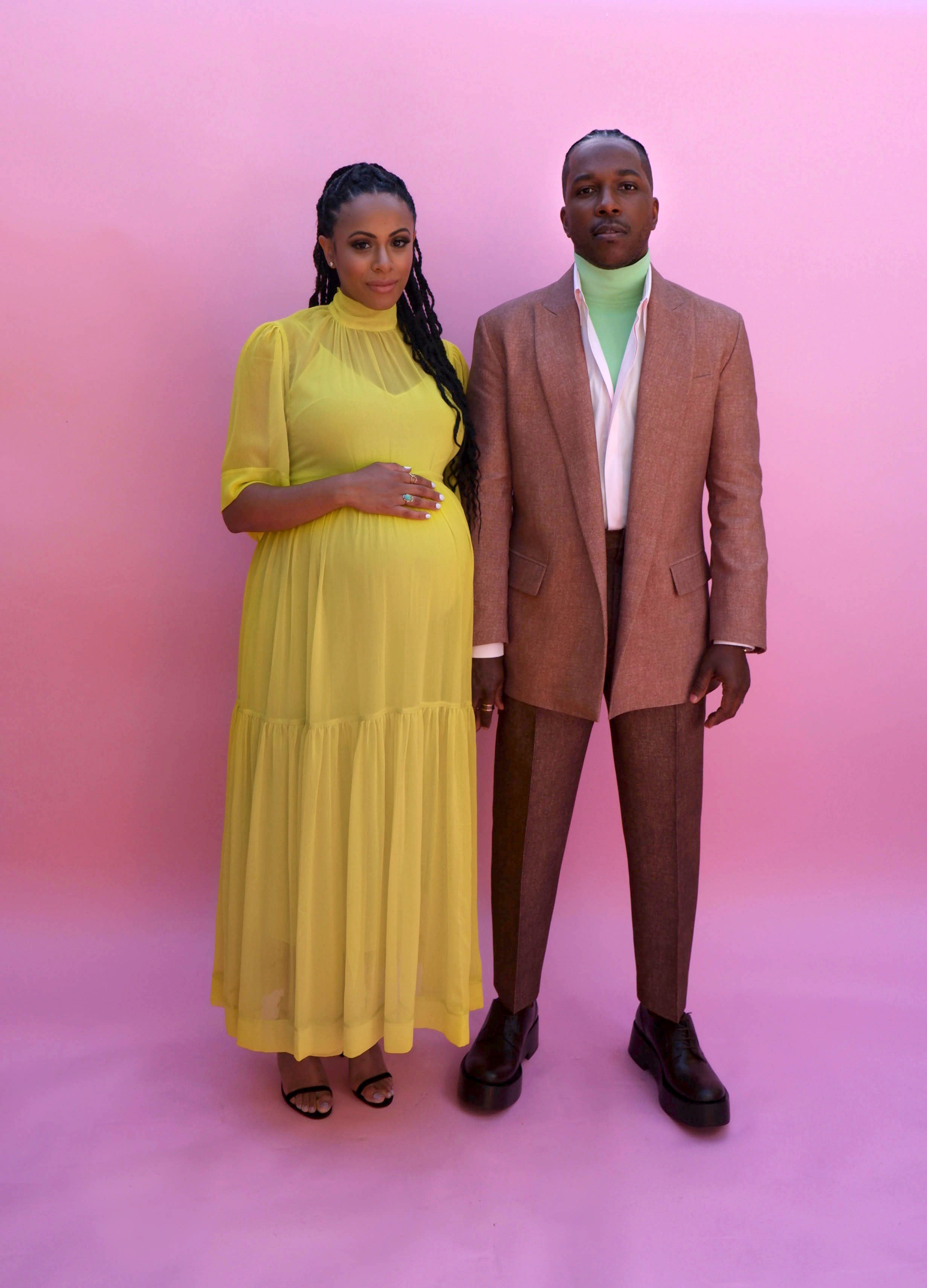