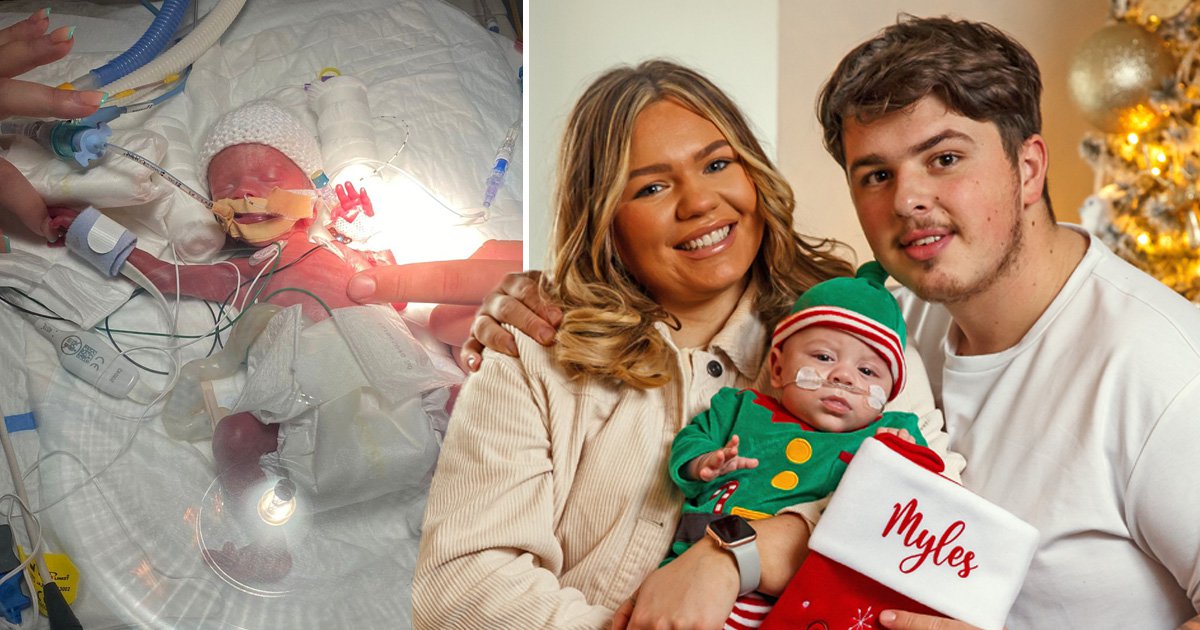 Parents of a baby born 14 weeks premature say their son has had a ‘rollercoaster’ of a year.

But thankfully, he was able to spend his first Christmas at home in Glasgow.

Little Myles weighed just 1lb 8oz, the size of an iPhone, when he was born back in June.

His mum, 24-year-old Rebecca Grainger, was rushed into hospital for an emergency caesarean section – after being diagnosed with pre-eclampsia at 26 weeks.

After the birth, Myles was unable to breathe so was immediately placed on a ventilator and endured a 15-week battle for life.

Rebecca and her partner Warren McKenna were permitted a quick cuddle before he was rushed into neonatal intensive care.

A few weeks after Myles was born, doctors told Rebecca and Warren that their son would need to come off the ventilator – something that would require steroids to wean him off.

However, medics stressed there could be side effects from both these things.

Rebecca explains: ‘The consultant basically said: “If he stays on the ventilator he could die, but if he is given steroids he could die”, and I remember just thinking, “why is this happening to us?”

‘The consultants explained that anything could happen with him, it could go 50/50.’

Over the course of 15 weeks, the couple arrived at the hospital every morning and often stayed until 2am – as Myles slowly made progress.

And, due to Covid restrictions, Rebecca and Warren were the only family members allowed to visit.

By the time Rebecca and Warren got to take Myles home, he weighed 5lb 5oz.

‘He’s still tiny but we thought he was absolutely humongous, a baby giant,’ Rebecca adds.

Currently, Myles is settling in well at home – despite having chronic lung disease.

He’s also now been introduced to his wider family.

‘He’s a good sleeper, good eater and it has been a dream having him home.

‘We’ve been blessed with a miracle.’