Home » Lifestyle » MICHAEL BURLEIGH: Putin is hell-bent on using this crisis to break us

MICHAEL BURLEIGH: Putin is hell-bent on using this crisis to break apart the West

In normal times, few people inhabit the thick forests on the border between Poland and Belarus. But these are not normal times.

Today, thousands of economic migrants are camped out in freezing conditions, all determined to make it over the razor wire into the EU. Many are heading here to Britain.

In the skies above, Russian bombers capable of carrying nuclear weapons have been circling. Nato has warned it is ready to step in to help Poland, a member nation.

In an ancillary development, there are fears that the Kremlin is planning to invade Ukraine, following its illegal seizure of Crimea eight years ago.

All told, this is an explosive situation. 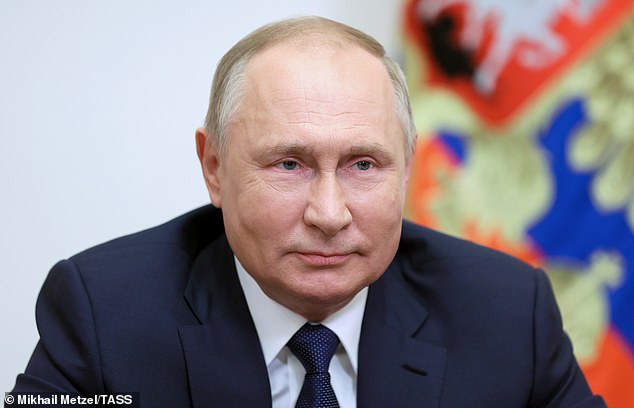 MICHAEL BURLEIGH: Putin is hell-bent on disrupting our cosy world view and, if necessary, breaking it apart

There is no doubting who is the immediate villain. Alexander Lukashenko, the hard-man president of Belarus reacted furiously to the EU sanctions which followed election rigging, political violence and the kidnap of a dissident from a Ryanair flight.

That’s why the Belarus state airline has, since the early summer, devised a cynical plan of flying thousands of migrants from Afghanistan, Iraq, Syria and Yemen to the Belarus capital, Minsk. They have all been given ‘tourist’ visas and led to the border to try to gain entry to the EU.

The puppet master of this policy is sitting 600 miles to the east in Moscow. For the brutal truth is that this crisis could not have blown up without the direct approval and connivance of Russia’s president Vladimir Putin.

For the migrants themselves, the situation is hazardous – travelling by night through marshland and dense forest in sub-zero temperatures. If they make it to Poland, Lithuania or Latvia, they face massed security forces.

But, chillingly, there are huge dangers for the rest of Europe and the wider world.

This is no exaggeration.

On Friday, Britain’s senior military officer warned there was ‘a greater risk’ of an accidental war with Russia now than at any time during the Cold War.

General Sir Nick Carter, chief of the defence staff, said the threat of ‘escalation leading to miscalculation’ was ‘a real challenge’. Addressing Western politicians, he said the belligerent character of ‘some of our politics’ can too easily lead to mistaken conflict.

WE’RE in a much more competitive world than we were even ten or 15 years ago. And I think the nature of the competition between states and great powers leads to greater tensions.

‘We have to be careful that people don’t end up allowing the bellicose nature of some of our politics to end up in a position where escalation leads to miscalculation.’

Even for Putin, turning migrants into weapons in a broader, hybrid war is a new low. But it is only one of several points of attack upon the West, which the Kremlin boss goads with cyberattacks, aggressive incursions by ships and aircraft – and now blackmail and extortion using desperate people and gas supplies as weapons. 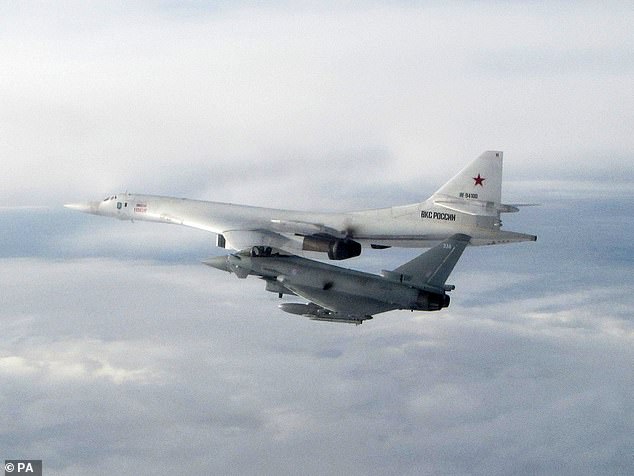 Pictured: A handout photo issued by Ministry of Defence (MoD) of a RAF fighter jet intercepting a Russian military aircraft approaching a UK area of interest. On Friday, two nuclear-capable Russian Tu-160 ‘White Swan’ bombers entered ‘the UK area of interest,’ the MoD confirmed after the incident, forcing the RAF to scramble its own fighter jets to escort them away

His decision to boycott the COP26 climate summit was in itself just another act of aggression.

His behaviour is a useful distraction from the problems facing his 144 million people – which include 250,000 Covid deaths, a population in steady decline and the shameful abandonment of Russia’s Far East, now a de facto Chinese colony.

Russia may lack the deep pockets of China, but it has found cheap ways of forcing the West to consider dropping the sanctions crippling its economy.

There are few trouble-spots where Russian-backed forces are not meddling, from Syria via Libya and Mali to the Central African Republic. And of course Ukraine, which the White House believes is once again under the threat of Russian invasion.

In unstable countries such as Mali or the Central African Republic, control of gold, bauxite, iron ore, manganese and uranium is up for grabs. Such regimes provide fresh markets for arms and exports of nuclear technology – industries in which Russia excels.

By using mercenaries to back client warlords and politicians such as those in Libya, Putin is seeking to gain a foothold in another vital oil and gas-rich state. And control of Libya means the potential to control a vast pool of would-be migrants hoping to cross the Mediterranean to Europe.

Migrants have become Putin’s new weapon of choice. He is well aware how, over recent years, more than a million refugees reaching the EU has destabilised the bloc.

Putin will have learnt from how the migration crisis in 2015 led the EU to pay a huge sum to President Erdogan of Turkey to stop Syrian and Iraqi migrants arriving via Greece or the Balkans. The Kremlin reckons Brussels might pay a similar ransom to countries on its eastern border.

DEPLOYING migrants as weapons of war has been added to another Putin tool of reckless diplomacy – threatening to cut energy supplies to the West.

As a major oil producer and member of the cartel known as OPEC+, Russia gets a big say in global production levels – and the price we pay at the pumps.

But it is Russia’s huge natural gas reserves which give Putin clout. Gas is essential not just for home heating and industrial fuel, but as a component of fertiliser and petro-chemicals. In times of acute tension, Putin has been known to turn the gas off, leaving East European customers freezing in the depth of winter. Britain takes only five per cent of its gas from Russia, but we’re not immune. Prices for households and industry shot up to unaffordable levels in recent weeks when Putin refused to sell surplus supplies to the West.

The EU depends on Russia energy for up to half its supplies. And this reliance will last for years to come, not least because the transition to renewable energy sources will be protracted.

The under-sea Nordstream pipeline delivering gas from Russia to Germany will soon start work, a vast monument to the Kremlin’s stranglehold on energy.

Perhaps the border problem with Belarus will be solved, temporarily at least, with walls, troops, more razor wire, or by applying sanctions to airlines complicit with Minsk.

But the stand-off should be a wake-up call to a West that seems to have no proper strategy to deal with Russia.

While Europe and America concentrate on China and the many threats it poses, we are ignoring the danger on our doorstep.

Putin is hell-bent on disrupting our cosy world view and, if necessary, breaking it apart.