3AW's breakfast program has scored a record audience share for the second ratings survey in a row.

Ross Stevenson and Russel Howcroft netted an audience share of 28.4 per cent, up from a record 26.1 per cent in September. The results come off the back of the coronavirus pandemic as well as a changing of the guard at the top-rating radio station. 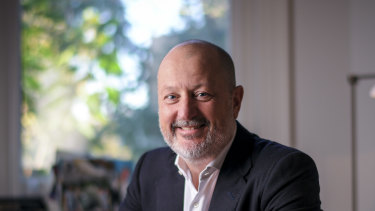 Russel Howcroft at his home in June this year. Credit:Eddie Jim

Howcroft replaced longtime 3AW presenter John Burns earlier this year. Nine, the owner of 3AW, is the owner of this masthead.

Howcroft is also a regular panellist on the ABC's panel show Gruen.

Elsewhere in the survey, ABC Radio Melbourne recorded small drops in audience share across the board but remains in second place overall. The station netted an overall audience share of 12 per cent, down 0.7 percentage points.

These figures reflect the timeslots designated by research company GfK, such as 4pm to 7pm for drive and not all programs fit neatly into these timeslots, which makes show-by-show comparisons difficult.

Thursday's results also mark the second survey since GfK was forced to put its research on hold due to the COVID-19 pandemic. The previous survey, released in September, marked a general shift towards 3AW and the ABC at the expense of the commercial FM networks.

With millions of Australians still working from home, industry executives have been told to continue to expect volatility in people's listening habits – especially in timeslots that traditionally rely on people commuting to and from work, such as breakfast and drive.