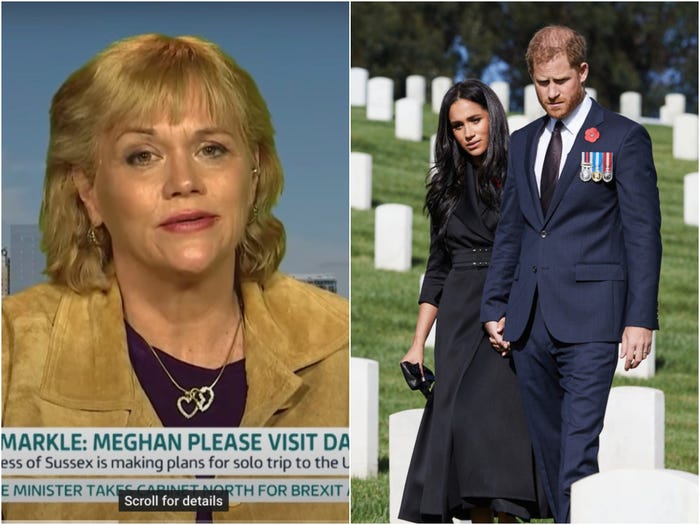 Speaking to Dan Wooton on Talk Radio, Samantha said Meghan Markle's tribute to fallen soldiers at a California cemetery on Sunday was an "exploitative photo opportunity."

Meghan and Prince Harry's private visit to the gravesites of two commonwealth soldiers at the Los Angeles National Cemetery was photographed by a pre-approved photographer, Lee Morgan, on Remembrance Sunday.

"Well, don't get me started on the concept of photo scandals, because allegedly that was the reason she disowned our father," Samantha said, referencing Thomas Markle's staged paparazzi photos in the lead up to Markle and Harry's wedding in 2018, which he ultimately did not attend.

The posed photos showed Thomas getting ready for the wedding, with images of him studying "Images of Great Britain: A Pictorial Tour Through History," attending a tuxedo fitting, and photos of an outdoor workout session.

In legal documents for Meghan's lawsuit against the Mail on Sunday, obtained by Insider, the duchess said her father refused to attend the wedding because he was "so publicly shamed" by the staged photos being made public.

Samantha continued: "So I was a bit shocked to see that on such an important topic — Remembrance and gratitude towards so many who have sacrificed their lives so we can live as we do today, as Harry said — that gratitude would be shown by an exploitative photo opportunity over fallen heroes."

Morgan added that he believed the photos were designed to get back at the palace after royal courtiers reportedly denied the duke's request to lay a wreath on his behalf at the royal family's public Remembrance service.

He was denied on the grounds that "he is no longer representing the monarchy," according to The Times.

Samantha also spoke about the couple's son, Archie Harrison, saying she doesn't know if she will ever get to meet him.

"Archie has become somewhat of a phantom in the eyes of everybody, because he must be walking now and he wasn't present at the memorial," she said. "I think the world hopes for the best for him, but I can't address it now because we haven't seen him and I don't know that we will sadly."

Representatives for The Duke and Duchess of Sussex did not immediately respond to Insider's request for comment.