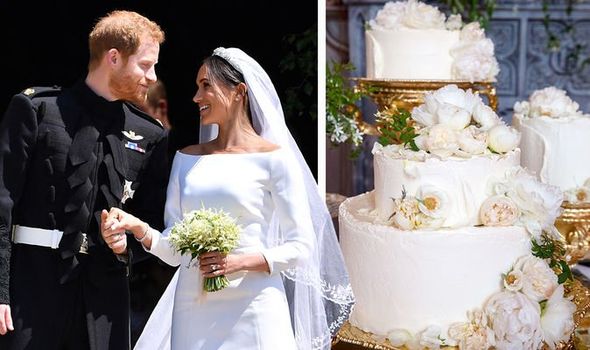 As head of the British monarchy, the Queen has a lot of power and influence over her family. However, there has been occasions where the royal has made an exception, especially when it comes to matters involving Prince Harry’s wife, Meghan Markle, the Duchess of Sussex and their wedding. Amongst many traditions, one which was completely broken was the wedding cake flavour and design.

Tradition: The Coat of Arms is a family affair

Traditionally, a Coat of Arms is created for the family of a spouse marrying into the Royal Family.

It is given to the father of the bride in advance of the wedding.

It has a blue background that represented the Pacific Ocean off the California Coast, two gold rays that were symbolic of California sunshine, and golden poppies, California’s state flower.

The Coat of Arms, which does not even include the names of Meghan’s parents, was bestowed directly and only upon Meghan, according to Fashion Magazine.

Tradition: The wedding invitations refer to the bride as “Miss”

While tradition has it that on royal wedding invitations, the bride is referred to as “Miss,” that didn’t seem appropriate in the case of Meghan, who had been married previously. Instead, the Palace allowed the wedding invitation to more accurately refer to Meghan as “Ms Meghan Markle”.

Tradition: Marry in May, rue the day

Express.co.uk previously revealed the Queen’s great-great-grandmother, Queen Victoria’s thoughts on marrying in May.

“Marry in May, rue the day” is a superstitious rhyme discouraging brides to marry in May and have an unlucky marriage.

The superstition grew into tradition – one which was broken when Meghan Markle married Prince Harry on May 19, 2018.

Tradition: No royal church wedding for a divorced spouse

Marriages involving divorcees have been problematic in the past for the royal family.

And when Prince Charles got re-married to Camilla, the Queen did not attend the civil ceremony.

For Harry’s marriage to Meghan , however, the rules were relaxed, and Prince Harry became the first Royal Family member to marry a divorcee in church.

Tradition: The brides father must give her away

Marie Claire referred to this as “a major tradition-breaking moment”.

The Queen allowed Prince Charles to walk Meghan down the aisle when she married Prince Harry.

This was after Meghan’s dad, Thomas Markle was ill and asked that he be “given the space he needs to focus on his health”.

It is actually British tradition that the groom doesn’t wear a ring at the wedding ceremony, according to Elite Daily.

But Harry, at his wedding, wore a platinum wedding band that he designed for himself.

He is the first groom in his family to wear a wedding band.

In another break from royal wedding tradition, Meghan and Harry were allowed to include American songs in their wedding ceremony.

Tradition: The royal wedding speeches are given by the best man and the host

At a traditional royal wedding, the best man and the host give speeches.

At Harry and Meghan’s wedding, that would’ve been the Prince of Wales.

However, Meghan was permitted latitude perhaps because of her “vibrant personality,” according to Harper’s Bazaar.

Express.co.uk previously revealed Kate Middleton and Prince William’s cake was a little different to that of their ancestors and Meghan and Harry’s was too.

The couple’s cake was baked by Claire Ptak and they opted for a lemon sponge cake with elderflower syrup, lemon curd, and buttercream.

For those who don’t want the whole cake to be fruitcake, it is suggested at least the top tier is fruitcake.

To add to this, the way the cake was construction, was not royal tradition either.

Meghan and Harry chose to present their cake tiers on individual stands, decorated with flowers.

“They really knew what they wanted,” Claire said in a previous interview with Town&Country. “I really admire that.

“We discussed that they wanted something very unique and outside the box; they didn’t feel that there should be any kind of constrictions, to do something within tradition.”