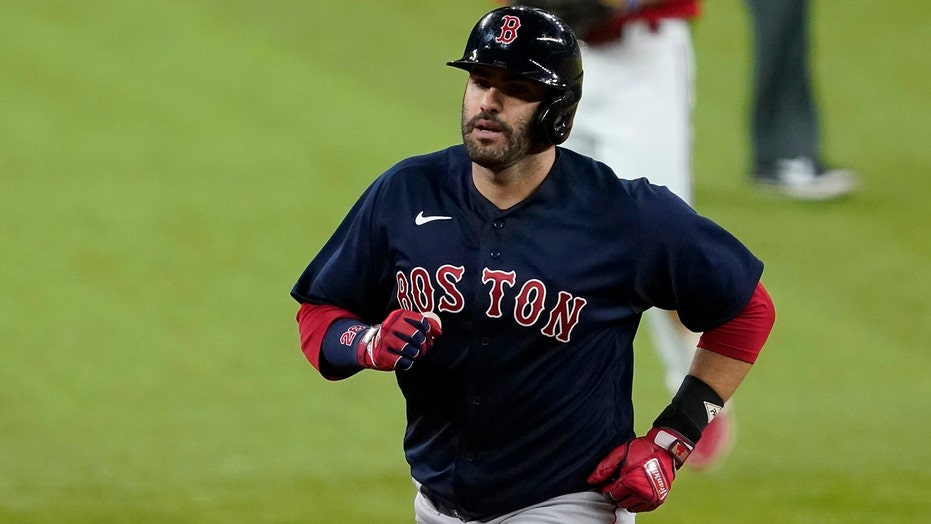 J.D. Martinez let Boston manager Alex Cora know early Friday that he was feeling just fine and ready to play after coming out of the previous game because of migraine-related symptoms.

“You have to trust your players,” Cora said.

Martinez, who struggled through the pandemic-shortened 2020 season, has certainly earned that. The slugger homered twice, raising his major league-leading total to nine, as the Red Sox beat Kohei Arihara and the Texas Rangers 6-1 on Friday night.

“He’s not going to lie to us if he’s feeling dizzy or has migraine. He’s not going to try to compete that way,” said Cora, who indicated immediately after Thursday’s series opener that Martinez would get a day off. “He texted me right away (Friday morning), I’m good to go. And he was good.”

After Arihara (2-3) walked the game’s first two batters, Martinez hit a 79-mph slider into the left-field seats and Xander Bogaerts homered into the Red Sox bullpen in left-center field.

Martinez led off the third with a 440-foot blast to center off an 80-mph splitter thrown by the Japanese right-hander.

It was the 17th career multihomer game for Martinez, and second this season. He hit three homers at Baltimore on April 11.

Martinez hit .213 with seven homers and 27 RBIs in 54 games last season. He hit over .300 each of the previous three seasons while averaging 41 homers and 113 RBIs.

Rafael Devers also went deep for the AL East-leading Red Sox, who in the first four batters matched their combined runs in their previous three games — two of those wins.

While the Red Sox hit balls over the wall, Nathan Eovaldi (4-2) allowed one run on four singles over six innings with five strikeouts. The right-hander extended his MLB-longest active homerless streak to 47 2-3 innings, and 196 batters since Austin Meadows homered off him in Tampa Bay last Sept. 12.

The only run he gave up came on a two-out single by former Red Sox teammate Brock Holt in the second after hitting one batter and walking another one. Holt played for Boston from 2013-19, and joined his hometown Rangers before spring training.

“The second inning I kind of let it get away from me,” Eovaldi said. “I had to get back down to what’s been good lately, and that’s just attacking the zone, and attacking the hitters and challenging them. I was able to do that the third inning on.”

It was another short outing for Arihara, who allowed six runs on four hits (all homers) with two walks and a hit batsman in 2 2-3 innings. The 28-year-old right-hander, in his first MLB season after six years in Japan, gave up five runs in two innings against the White Sox last Sunday, following consecutive starts when he threw 5 2/3 scoreless innings.

“The stuff just doesn’t look the same. The velo’s down, the split and everything, it’s just not as sharp,” Texas manager Chris Woodward said.

After Martinez homered for MLB-leading 25th RBI and Bogaerts had a 380-foot flyout to center to start the third, Devers hit his seventh homer for his 21st RBI.

Hyeon-Jong Yang struck out four and allowed only a single to Martinez in 4 1/3 scoreless innings of relief for Texas. The 33-year-old from South Korea made his big league debut earlier this week.

“They had scored six runs in a short amount of time and a bunch of homers, and we just couldn’t shut them down,” Woodward said. “He’s been impressive.”

SHORT HOPS The only Boston players with more April home runs than Martinez are David Ortiz in 2006 and Hanley Ramírez in 2015, both with 10. … The Red Sox ended April with a 17-10 record. The last two times they won at least 17 of their first 27 games were 2013 and 2018 — and they were World Series champions both of those seasons. “Do that consistently over the course of the season, you win 17 games a month, you put yourself in the conversation,” Cora said. “Now this is just the start. We have to keep working.”

ALL THE WAY HOME

When Holt hit a long slicing flyball to right in the fourth inning, David Dahl took off running all the way home from second base. He was already around third base when right fielder Hunter Renfroe made a nice running catch and threw to second base for an inning-ending double play.

Boston second baseman Christian Arroyo made a diving backhanded stop up the middle in the sixth, and was on his rear end when he managed to flip his body over without going to his feet while making the throw to get Adolis Garcia out at first base.

Boston lefty Eduardo Rodriguez (4-0, 3.52 ERA) tries to become the first American League pitcher to five wins when he starts Saturday night against the Rangers, who went 0-8 on Fridays and Saturdays in April. RHP Jordan Lyles (1-2, 6.75), who has allowed 18 runs in 24 innings, starts for Texas.