Incredible images of the Solar System’s largest canyon, located on Mars, have been published by NASA.

The gargantuan equatorial chasm, called Valles Marineris, is more than 2,500 miles long and travels along approximately a quarter of the planet’s circumference.

As well as being almost ten times longer than Earth’s Grand Canyon it is also three times deeper than the Arizona wonder. 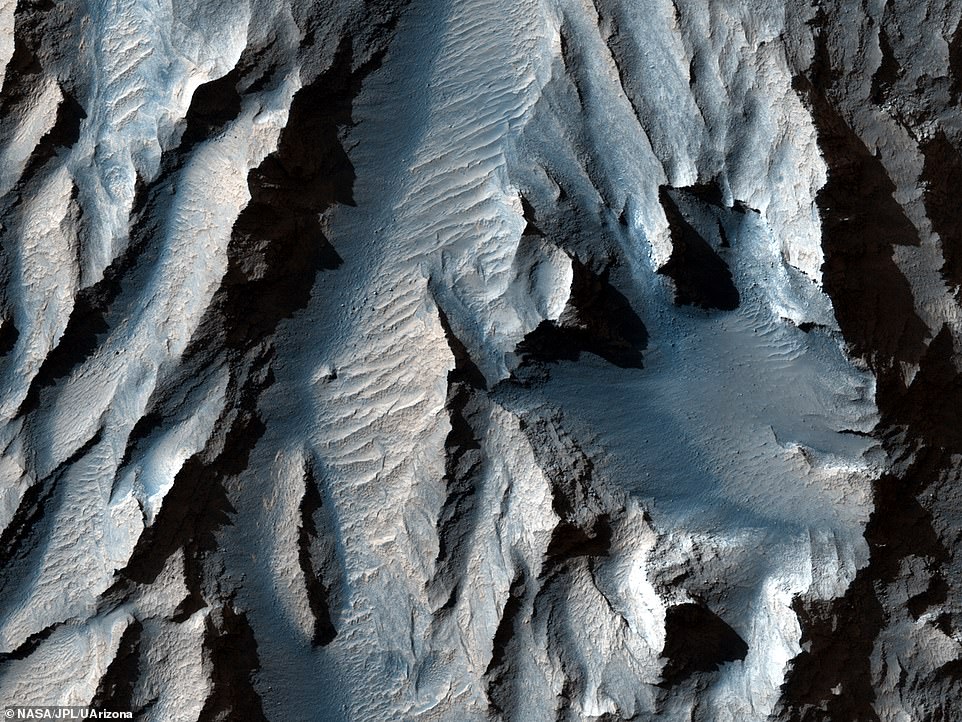 Incredible images of the Solar System’s largest canyon, located on Mars and called Valles Marineris, have been published by NASA (pictured) 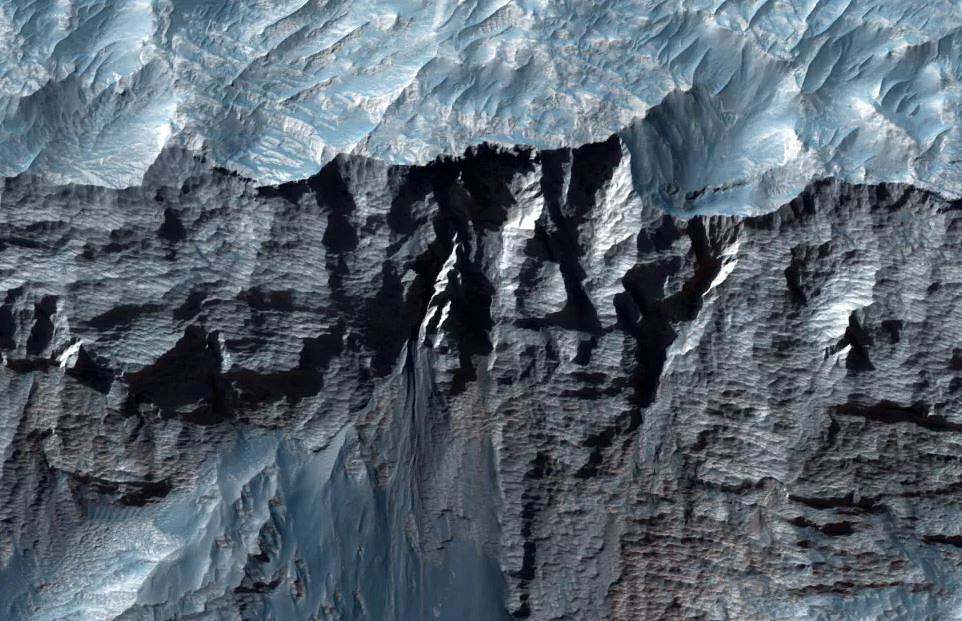 Images of the canyon (pictured) were taken by NASA’s HiRISE (High Resolution Imaging Science Experiment) mission. The project is the most powerful camera ever sent to a different planet and on-board the Mars Reconnaissance Orbiter

The project is the most powerful camera ever sent to a different planet and is on-board the Mars Reconnaissance Orbiter which has been orbiting the red planet since 2006.

It was built by experts at the University of Arizona’s Lunar and Planetary Laboratory at a cost of $40million and weighs 143 pounds (65kg).

A photo of the canyon was published by HiRISE recently as astronomers try to find out how the landmark formed.

Mars’s answer to the Grand Canyon is far from the only enormous natural feature on the planet, which is also home to the Solar System’s biggest volcano, Olympus Mons, which resides in a nearby formation dubbed the Tharsis bulge.

Mystery surrounds how both features formed, but the ESA’s leading theory is that the mountain and the canyon are intrinsically linked.

The theory states it is possible that during Mars’s formative years and first billion years of existence magma swelled under Mars’s crust and produced the bulge.

This may have drove the erection of Olympus Mons as well as the vast trough Valles Marineris which was a result of the planet’s crust collapsing after being ripped apart by surging magma.

Humanity has never set foot on Mars but has sent various landers and rovers to learn more about our neighbouring world.

SpaceX, NASA and other space agencies are hoping to send humans to the planet by the end of the decade, with hopes of a martian colony beng established to act as an eventual stepping-stone for deep-space missions. 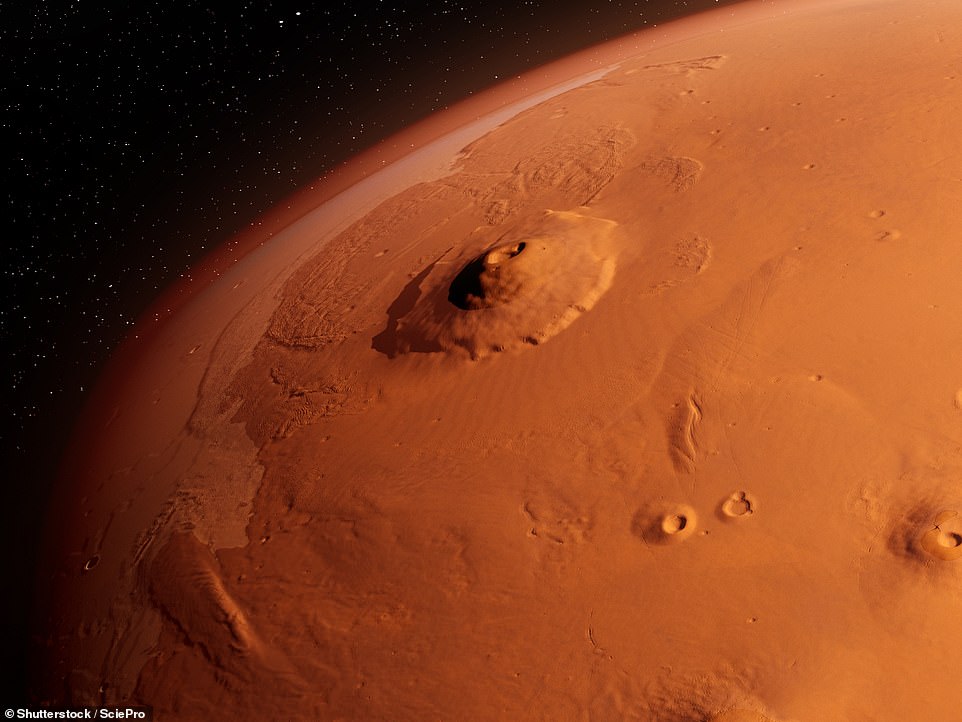 Mars’s answer to the Grand Canyon is far from the only enormous natural feature on the planet, which is also home to the Solar System’s biggest volcano, Olympus Mons (artist’s impression pictured), which resides in a nearby formation dubbed the Tharsis bulge. Mystery surrounds how both features formed but the ESA’s leading theory is that the mountain and the canyon are intrinsically linked

A trio of spaceships from Earth are on their way to Mars in search of life and to better understand the atmosphere and environment of the Red Planet.

Orbiter missions from the United Arab Emirates and China, as well as rovers from the Chinese and American space agencies are due to arrive by the middle of February.

Each of the vessels are currently hurtling through space at thousands of miles per hour, gathering data about the space between the two worlds to send back home.

NASA’s Perseverance rover follows in a long line of US rovers that have been sent to explore the Red Planet, including the currently-operational Curiosity rover, which has sent many stunning images back to Earth.

As well as a host of scientific instruments, the NASA spaceship is ‘festooned’ with an array of ‘hidden gems’ including chips carrying the names of 10.9 million people.

The Mars 2020 mission is part of a larger programme that includes missions to the Moon as a way to prepare for human exploration of the Red Planet.

Charged with returning astronauts to the Moon by 2024, NASA will establish a sustained human presence on and around the Moon by 2028 through NASA’s Artemis lunar exploration plans.

This is the first interplanetary mission by an Arab nation, and it has now completed its final major trajectory correction before inserting itself into Mars’ orbit in February.

Known as Mars Hope, the probe’s arrival and Mars Orbit Insertion (MOI) on February 9 will mean the United Arab Emirates becomes the fifth nation to reach the planet.

The trajectory during the cruise has been accurate enough that they have been able to plan new scientific observations for the final approach to Mars.

There is far less publicly-available information about the Chinese Tianwen-1 mission, launched by the China National Space Administration (CNSA) on July 23, 2020.

It is due to reach the Red Planet at some point in February and includes an orbiter, a lander and a rover that will look for ancient signs of life on Mars.

CNSA has confirmed that the lander will touch down inside the huge impact basin Utopia Planitia, to the south of NASA’s Viking 2 lander site and northwest of the Mars InSight lander that touched down in November 2018.