I put it to Andy Simionato that he’s creating the TikTok of literature.

Melbourne couple Simionato and Karen ann Donnachie – artists, designers and academics – say they are trying to “imagine the future of the book itself”. 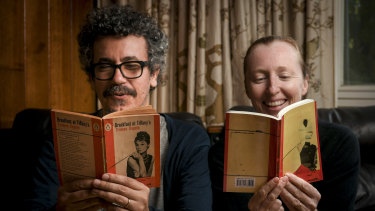 And if this is the future of literature, it’s hilariously terrifying. Or terrifyingly hilarious. Or something.

Their machine scans printed books and runs an AI over the text, picking out a scattered few of the most “salient” words on a page to form a classic haiku poem.

It then erases all the other words and plonks onto the page the internet meme or image it deems most appropriate.

The pair have used this to transform famous works of literature, 50 Shades of Grey and a chess manual into weird, truncated, poetic, nonsensical, somehow accidentally meaningful, accidentally funny vandalisation/reinterpretations of the originals. 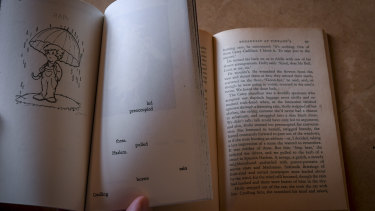 They call it their Library of Non-Human books, a project to be exhibited at next week’s Melbourne Art Book Fair, the opener for Design Week. It’s a “post-human endeavour” that’s already infuriating people, which makes Karen and Andy delighted.

“I might end up in a fist-fight with a poet,” jokes Simionato. A machine just can't write poetry, they were told. You stick a feather on a plane and you don't turn it into a bird.

“What gets called into question is the literary value of the poem. But it’s important that they’re read in context. This is about what the ‘book’ is becoming.”

I ask them to put the first Harry Potter through the machine. The AI comes up with:

I through started pulling on.

Them that was hidden.

Then person to for before

Donnachie says their work follows a long literary tradition, through Dada and William S Burroughs, who used collage, cutting and shuffling of texts to make “chance encounters with words and with meaning”.

They added the Google images to create an “illuminated work for a post-literate society”, says Donnachie.

Google and other online mega-corporations have set their server farms to read texts on our behalf, the pair say. They’re trying to draw attention to what that means.

“We have handed mass digitisation to the conglomerates, Google and Amazon – what does the book become at this point?” asks Simionato.

“If we’re going to keep deferring all this reading and writing to AI, finishing your texts, finishing your emails … Google doesn’t know things. There’s a difference between machine learning and machine knowledge.”

Donnachie wonders “are we putting enough words into our communication and what effect is that having in society? In Facebook, social media, people are very trigger happy. And I think that’s because there isn’t the nuance of those extra sentences.”

“We’re deferring our meaning-making to Google, to indexed searches, to the first paragraph of a Wikipedia entry.” 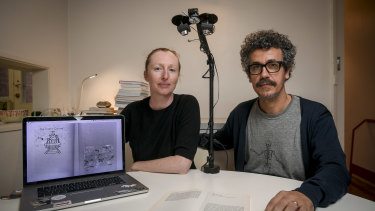 The couple’s other projects include a machine that writes, in cursive longhand, onto a long scroll, the entirety of Donald Trump’s Twitter output. They hate turning it on because it’s really noisy and irritating.

Another reformats poems using Captcha images: an effort to make them AI-proof, to reinforce and defend their humanity – for now.

“But we need to take agency over the algorithm,” says Donnachie. “It is, after all, following the instructions that humans are putting in.”