Kate Middleton ‘couldn’t understand’ why Prince Harry had never met his bride’s father before their wedding and was worried that Meghan Markle ‘appeared embarrassed’ of some family members, royal author claims

The Duchess of Cambridge worried about Prince Harry in the lead up to his wedding to Meghan Markle because she ‘appeared embarrassed’ about certain members of her family, a royal author has claimed.

Kate Middleton, 39, reportedly expressed her concerns to Prince William’s brother after he brought his then fiancé to stay with them at their Norfolk home Amner Hall for Christmas shortly after they announced their engagement to the world in 2017.

The Duke and Duchess of Cambridge ‘praised Meghan for mucking in and playing with George and Charlotte’ following their visit.

However, when Prince Harry later guest edited BBC Radio 4’s Today programme and told listeners his loved ones were ‘the family I suppose that she’s never had, it reportedly didn’t go down well with the in-laws.

Speaking to The Sun, Ingrid Seward, editor in chief of Majesty Magazine, claimed: ‘She could not understand why Harry had never met his future father-in-law, nor why Meghan, who Harry assured was The One and “ticked all his boxes”, appeared embarrassed about her family and unwilling to speak about them apart from her mother. 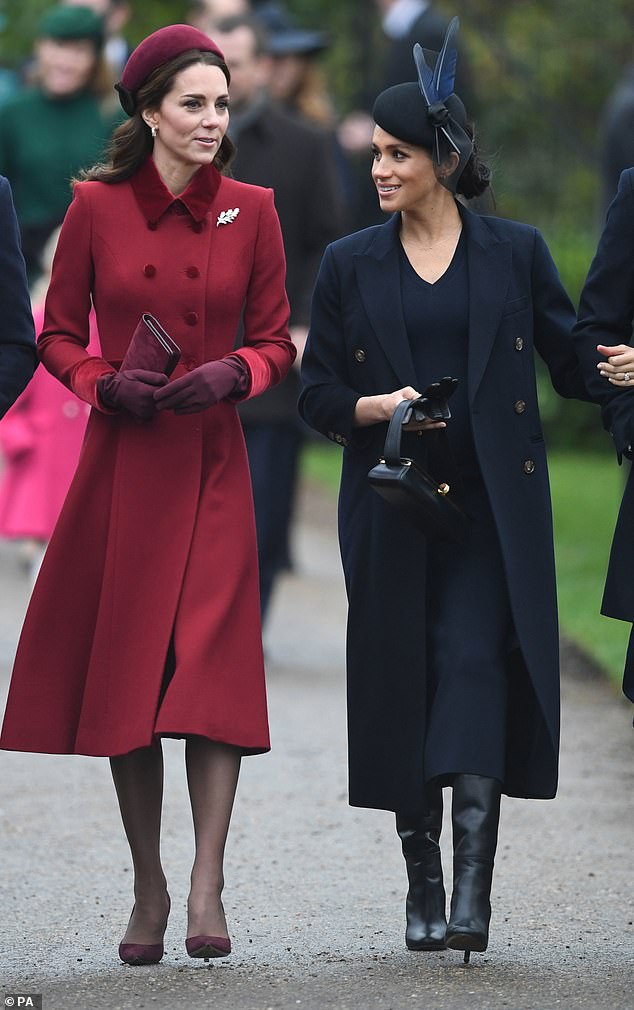 The Duchess of Cambridge, 39, worried about Prince Harry in the lead up to his wedding to Meghan Markle because she ‘appeared embarrassed’ about certain members of her family, a royal author has claimed. Pictured, with the Duchess of Sussex arriving to attend the Christmas Day morning church service at St Mary Magdalene Church in Sandringham, Norfolk, 2018 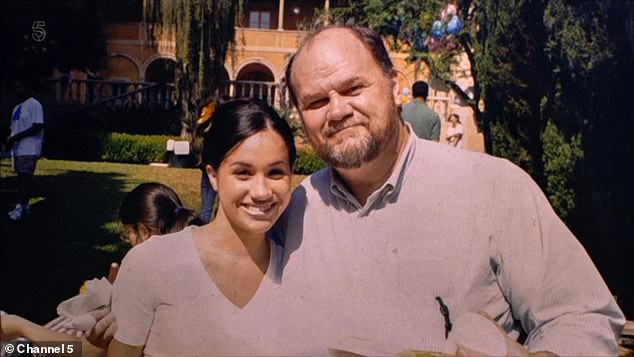 Meghan was six years old when her parents divorced and she lived with her mother until she was a teenager, when she moved to live with Thomas (pictured, together)

And according to the royal author, the mother-of-three had worries about Meghan’s relationship with her father early on – noting that she seemed ‘unwilling to speak’ about her dad to The Firm – only ever mentioning her mother, Doria Ragland.

Meghan was six years old when her parents divorced and she lived with her mother until she was a teenager, when she moved to live with Thomas.

Doria was the picture of pride when she watched her daughter marry Prince Harry at St George’s Chapel on 19 May 2018.

Doria was Meghan’s sole relative inside St George’s Chapel on her wedding day, after her father Thomas Markle – who had been due to walk his daughter down the aisle – revealed he’d suffered a heart attack and would not be travelling from the US to attend. 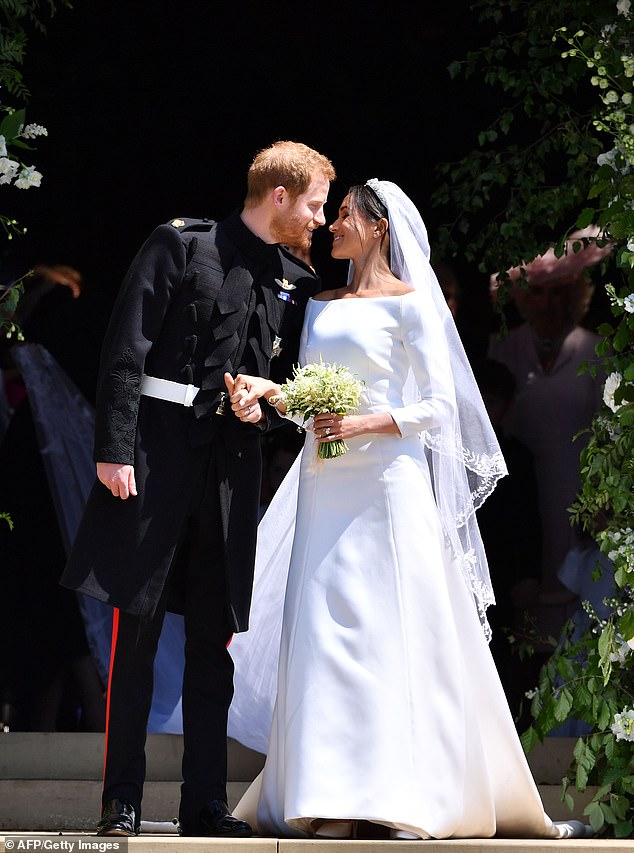 The Duke and Duchess of Sussex emerge from the West Door of St George’s Chapel, Windsor Castle, in Windsor, on May 19, 2018 after their wedding ceremony

But following the ceremony, it became clear how quickly Doria has been accepted into the royal fold, as she emerged from the chapel on the arm of Prince Charles, whose wife, the Duchess of Cornwall, was on the other side.

There she posed for her first photograph as the mother to a princess, standing alongside the Duke and Duchess of Cambridge and the Queen herself, and looking chic in a pistachio green coat and matching dress by Oscar de la Renta.

However, during a recent bombshell interview with Oprah Winfrey, Meghan Markle said she cannot fathom hurting Archie the way her own father ‘betrayed’ her before the royal wedding.

She said she has ‘found it hard to reconcile’ with her father Thomas for insisting he had not been speaking to the media.

She said: ‘I look at Archie, I think about this child, and I genuinely can’t imagine doing anything to intentionally cause pain to my child.’

In March, Meghan’s estranged father Thomas denied his daughter’s claims to Oprah that he had ‘betrayed’ her before branding his son-in-law Harry ‘snotty’ and accusing him of failing to properly support her when she was suicidal.

Appearing on Good Morning Britain, he said that he’s apologised ‘100 times’ for doing a deal with a paparazzi photographer before the Royal Wedding in 2018 and urged the couple to see him with Archie now they only live ’70 miles away’ from his Mexico home. 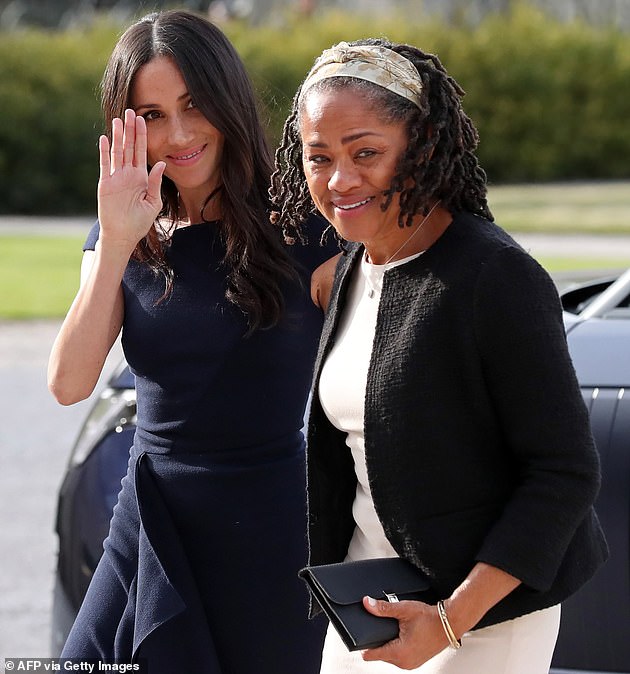 Kate had worries about Meghan’s relationship with her father early on – noting that she seemed ‘unwilling to speak’ about her dad to The Firm – only ever mentioning her mother, Doria Ragland (pictured near Windsor on May 18, 2018)

He explained: ‘We all make mistakes – but I’ve never played naked pool or dressed like Hitler like Harry did’.

And in a further attack on Harry, Mr Markle said that his daughter’s admission she was suicidal while living in the UK reflected badly on his son-on-law.

He said: ‘It really did upset me, like I said, it would have been easy for her to reach out to me, any of the rest of her family, who she claims she doesn’t know. But the other thing is that I would think that she could turn to her husband.’ When noted she did speak to Harry, Mr Markle said Meghan’s husband Harry had ‘obviously not supported her that well’.

Mr Markle than slammed his daughter’s decision to refuse to see or speak to him, Mr Markle said: ‘The biggest problem here is she’s pretty much ghosted all of her family’.

The 76-year-old also denied the Royal Family – or Britain – is racist, saying if it is true an unnamed royal asked about how ‘dark’ Archie’s skin would be, it was probably just a ‘dumb question’, before calling Meghan and Harry’s claims ‘bulls**t’.

Mr Markle, who watched the entire two-hour CBS interview, said he was ‘upset’ when he saw his youngest daughter tell Oprah that royal life was so stressful she was suicidal and ‘couldn’t be left alone’ – but then said Meghan’s husband Harry had ‘obviously not supported her that well’.