Here’s a question I don’t ask myself enough: what did Ye – or, the artist formerly known as Kanye West – do this week?
I know we’re less than a fortnight into 2022, but strap yourself in. 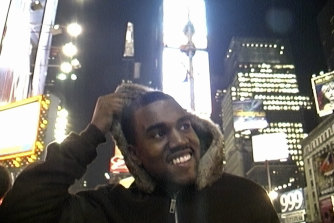 Kanye West, pictured here in the upcoming documentary Jeen-Yuhs, is back in the spotlight, post-divorce.Credit:Netflix

Oh no, what have I started…
Over the weekend, Interview Magazine published a Pulitzer-worthy piece titled Date Night by actor Julia Fox, in which she described in detail her second (!) date with West.

Remarkable not just for its jarring length (barely two paragraphs), the article explains how Fox and West met in Miami on New Year’s Eve, returned to New York City to watch Broadway production Slave Play, then had dinner at upscale restaurant Carbone where West directed Fox in a public photoshoot before whisking her off to a hotel room suite full of clothes to give her a fashion makeover.

Oddly enough, this already sounds familiar.
You’re right, it’s basically an episode of Keeping Up with the Kardashians – the one where Kanye shipped in a roomful of clothes to re-style his now ex-wife Kim. In any case, Fox’s article also included very intimate photos from their dress-up date.

Wow. Ok so wait, who is Julia Fox?
We have to start all the way back there, do we?

Yes. Who is she?
If you’d seen the Safdie Bros’ 2019 cult fave Uncut Gems, you wouldn’t be asking that. If you haven’t, why haven’t you? Watch Uncut Gems. I mean, it’s right there on Netflix in the Adam Sandler aisle.

Okay. But why did she write an article about her second date with Kanye?
As a friendly public service? I don’t know. “Everything with us has been so organic,” Fox wrote. “I don’t know where things are headed, but if this is any indication of the future I’m loving the ride.” 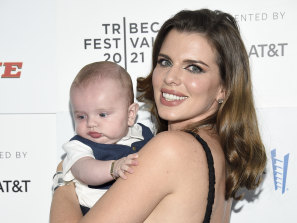 Fox and son Valentino at the premiere of Soderbergh’s No Sudden Move last June.Credit:Invision

That’s a very weird thing to publicly announce after your second date with Kanye West. What’s the internet saying about this?
Everything. Poet Rachel Rabbit White, evoking the grand tradition of celebrities commenting on their own celebrity, suggested Fox was dabbling in performance art: “it’s ‘life as a performance’ for the girls. Genius,” she wrote.

Hmm.
Others dove into conspiracy theory, suggesting West is looking to challenge the attention Kim’s been getting around her flourishing romance with SNL pantsman, Pete Davidson. Bizarrely, Davidson and Fox – the post-divorce rebounds to what was once pop culture’s dominant couple – both featured in a photoshoot together for Paper Mag in 2019.

Was that photoshoot cursed or something?
Probably.

Any other perspectives on this happening?
Famed internet writer Cat Marnell, a sort of mentor to Fox, told The Cut: “Julia Fox is doper than Pete Davidson, Kim Kardashian, and Kanye West combined. She’s a legitimate sorceress. She’s the Michael Jordan of vixens,” and claimed Fox becoming a household name thanks to her new megastar relationship “will be the greatest thing to ever happen in my lifetime”.

Kanye fans, meanwhile, are just looking forward to the dirty potential of his next album, now that he’s seemingly abandoned God and returned to grinding celebrities in public.

I feel like this is a lot of information I didn’t really need to know.
Welcome to the first great celebrity story of 2022, where famous folks disregard any semblance of personal boundary for our collective enjoyment. To quote Fox herself, “if this is any indication of the future, I’m loving the ride”.