JAN MOIR: I miss Dad every day. But I’m so glad he didn’t live to endure this Covid care home cruelty

When this is all over, when the coronavirus has finally scuttled off like a whipped cur and life begins to return to normal, will we be proud of what we did and how we coped as a nation?

Or will a feeling of quiet shame creep across the populace as we contemplate the worst of our Covid crimes — snitching on neighbours, panic-buying flour, not bothering about anyone else. Particularly the not bothering.

Especially when we consider what happened to the elderly as the pandemic raged on; those stuck in care homes across the land, cut off from contact with their loved ones, growing older and frailer while alone and confused.

One was a clip of a woman called Betty, who has actually moved into a care home in Birmingham because she can no longer bear to be without her husband, Kenneth, who has dementia and lives there. 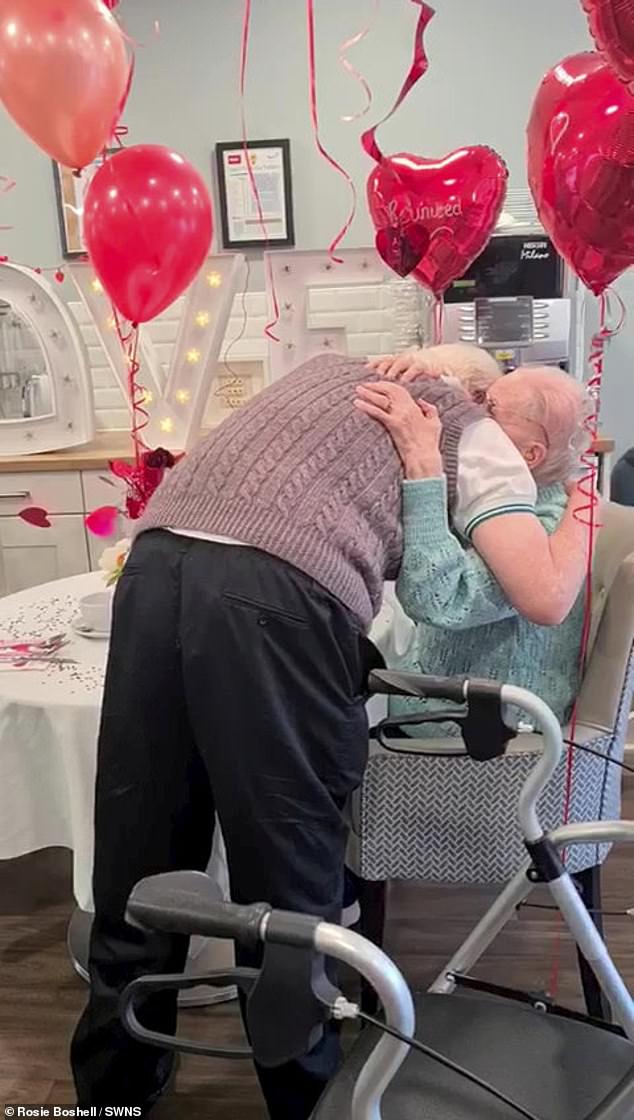 One was a clip of a woman called Betty, who has actually moved into a care home in Birmingham because she can no longer bear to be without her husband, Kenneth, who has dementia and lives there

When he came into the room with his walking frame, saw his wife and pushed away the frame to hug her — well, it would take a hard heart not to have shed a tear at their mutual joy.

Ditto the photograph of another loving wife, forced to kneel on a cold and damp November pavement to peer through railings for a glimpse of her wheelchair-bound husband in his care home that ran on the Mail’s front page yesterday.

And it is barely a week since a retired nurse in Humberside was arrested by police after she removed her 97-year-old mother from a care home before the second lockdown began.

My God. What have we become?

The battle to keep care homes Covid-free and ensure the safety of vulnerable residents was entirely commendable at the beginning of the pandemic.

But it feels wrong, eight months later, to continue to condemn the elderly to this lonely, demi-life — particularly as Christmas approaches.

Many of them have had no meaningful contact with their loved ones since March, which means no familiar, friendly faces, no hugs to say hello, no kisses goodbye. 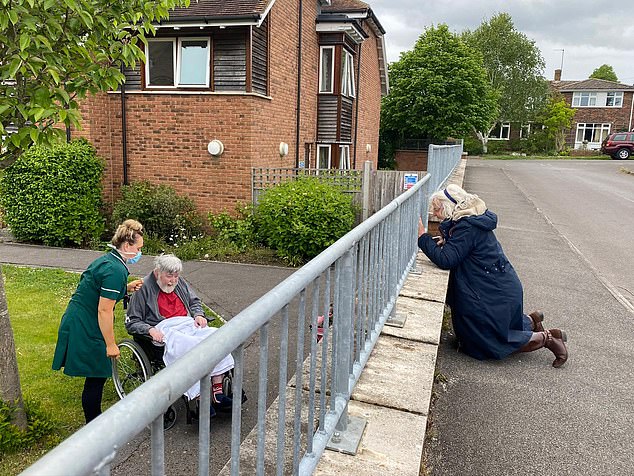 Ditto the photograph of another loving wife, forced to kneel on a cold and damp November pavement to peer through railings for a glimpse of her wheelchair-bound husband in his care home that ran on the Mail’s front page yesterday

Even the simple but profound solace to be gained from holding a loved one’s hand has been denied them.

And it is hard for the families, too. When my own father was in a care home towards the end of his life last year, it was an enormous comfort to sit there, when conversation became too difficult for him, just holding his big, warm hand in mine.

I miss my dear old dad every day, but I am so glad that he did not live through the constraints of this Covid nightmare, where he might have felt bewildered and abandoned. And we would have been agonised at being unable to see him, too.

This newspaper has started a campaign to allow care home residents to reunite with their loved ones in time for Christmas. Well, someone had to do it — why not us?

The aged and the vulnerable always seem to be way down the list of Government priorities. Perhaps it is because ministers know that the oldies aren’t going to organise themselves into a furious Extinction Rebellion style-protest, and glue themselves to the Downing Street railings.

Sometimes it seems that the officials are more interested in helping pizza chains to survive than doing something positive to help frail senior citizens. And this bleeds out into society, which tends to concern itself with the problems of the young rather than the struggles of the old.

One recent headline even focused on the pandemic making young people easier to radicalise.

There was an eruption when students isolating on a university campus couldn’t get instant access to a hot Pot Noodle and a cold beer. Meanwhile, I am tired of reading about the supposed rise of depression among the young, who still have everything to live for. The elderly are just supposed to keep calm and get on with it.

Without emotional support from family, the mental and physical health of the isolated elderly is sharply deteriorating.

But surely with a will and determination, there are ways to beat the Covid rules? After all, care home staff go in and out with impunity.

Mass testing in care homes to ensure residents can have face-to-face visits, and even physical contact, should not be impossible.

Or one relative, friend or carer could be designated as a ‘key visitor’ and given a Covid pass? Why not?

Finding a solution may be challenging, but surely it is worth the effort. After all, what is the point of another year or so at the end of your life if you are forced to spend it alone?

Christmas is coming, and while it may be too late for another pilot testing scheme or complicated Government initiative, it is not too late for a little bit of humanity and some common sense.

The miserable situation being endured by some of our oldest, most helpless citizens is shameful. In years to come, when they are with us no more, surely no one wants to look back to the year of Covid and feel that we failed them — and failed them completely.

Stop harping on about your onions, Nigella

On Nigella Lawson’s new cooking show this week, the domestic goddess made a curry with banana skins and also a dish made with mashed fish fingers. No wonder her new book — and the accompanying BBC series — is called Cook, Eat, Repeat (burp). 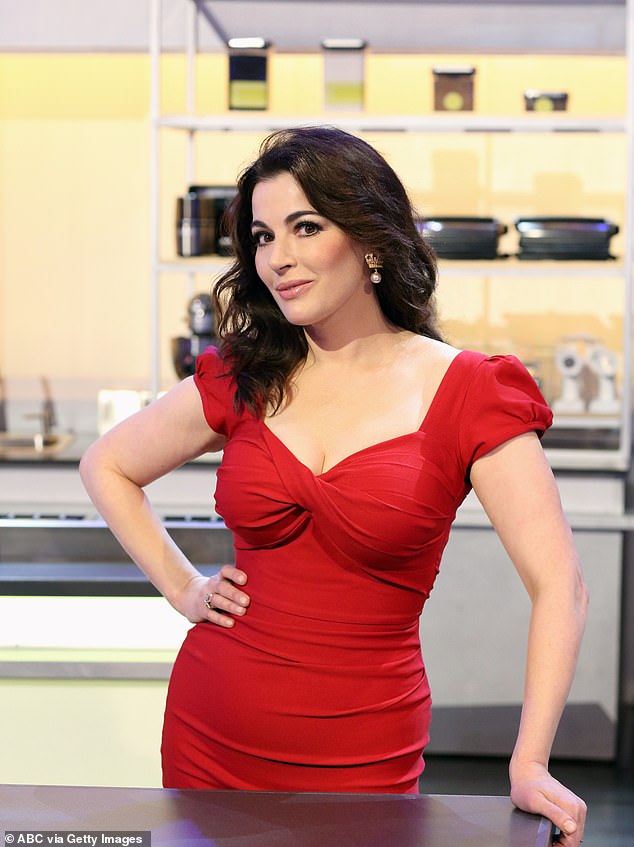 On Nigella Lawson’s new cooking show this week, the domestic goddess made a curry with banana skins and also a dish made with mashed fish fingers. No wonder her new book — and the accompanying BBC series — is called Cook, Eat, Repeat (burp)

Delights to come include macaroni cheese with crab, plus a meditation on chopping onions that will have you crying — with laughter. ‘In some books I have stipulated a large onion, but the truth is the weight of the onion or the size of it is not always critical; perhaps — within normal parameters — rarely so,’ she writes. Oh just chop the bloody thing and get on with it!

There are lots of things to love about Nigella, but all this makes me wonder whether we have reached a recipe nadir, and that this is one cook book too many.

A survey has revealed that the most hated office jargon phrases are; touch base; sliding into DMs; thinking outside the box; and ‘spitballing’ ideas – how disgusting.

My most loathed is the use of the phrase ‘reaching out’ instead of the perfectly serviceable ‘contacting’. Reach out and I won’t be there, as the Four Tops didn’t sing.

Comedian Bob Mortimer caught the trend and scored a big internet hit last year with his hilarious Train Guy character — a commuter who spouted inspired office jargon into his phone while ‘riding the rails’ for a ‘visage a visage’ in London, otherwise known as the ‘win-win, count-me-in city’.

There are lots of real train guys out there. And now that I am not riding the lockdown rails any more, I almost miss them.

The Gov.UK Twitter account is full of useful information and advice, oh yes indeedy. Earlier this week it tweeted: ‘When indoors, remember to open windows regularly to let in fresh air.’

Thanks guys! This was clearly aimed at those citizens who remain unsure of what to do with those glass-filled holes in their walls — and we must appreciate that what is obvious to one person might not be to someone else. But still, where is humanity going? I wonder if SAGE was consulted on the matter.

Other tips from the caring Gov.UK might include: Do not hold whirring end of chainsaw. This product may break if dropped. Do not exceed stated dose. Apply on dry skin only. Remove cheese from packaging. Do not use while sleeping. And don’t believe anything Matt Hancock says.

Being Mrs Bojo helps when selling a book

Marina Wheeler QC seems like a very nice woman, but she is testing my patience.

The ex-wife of Boris Johnson and mother of four of his children has not had her problems to seek.

She was married to Boris for a start, all the way through his most priapic years. They were divorced earlier this year and she has also been ill with cancer. 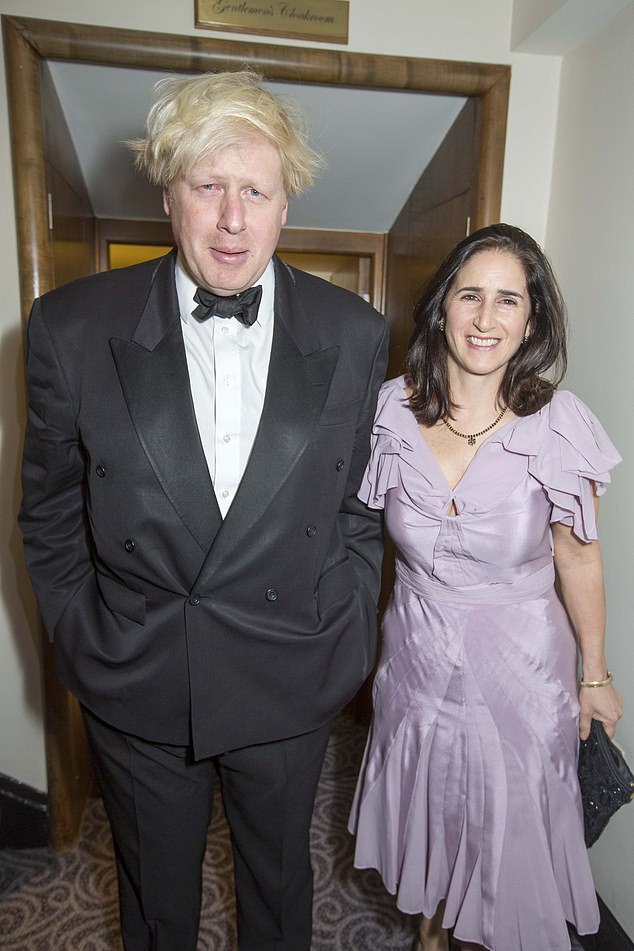 Marina Wheeler QC (right) seems like a very nice woman, but she is testing my patience. The ex-wife of Boris Johnson and mother of four of his children has not had her problems to seek

Now she has written a book, The Last Homestead, about her family and the Partition of India, jolly good for her.

Speaking about her new book, she has refused to be drawn into questions about her ex-husband. The lawyer, 56, told Radio 4 this morning: ‘I’m not wild about discussing my husband, I mean as you know I have recently divorced him.’

She said much the same thing to Good Morning Britain and also to a Sunday newspaper, where she was featured on the cover of their magazine.

Oh, don’t all shout at once. Yes, she is much more than the identity of her husband.

But he is the reason why she has been given premium airtime and acres of newsprint in which to promote her book.

Who could have imagined statues would become so contentious?

For years we have sailed past these eyeless figures of stone or bronze in public places without thinking much about them. Now they are being turfed into harbours, torn down, argued over. And the she-statues are always the most contentious.

Two years ago, Millicent Fawcett joined the line-up of male figures in London’s Parliament Square to mark the centenary of women’s suffrage. 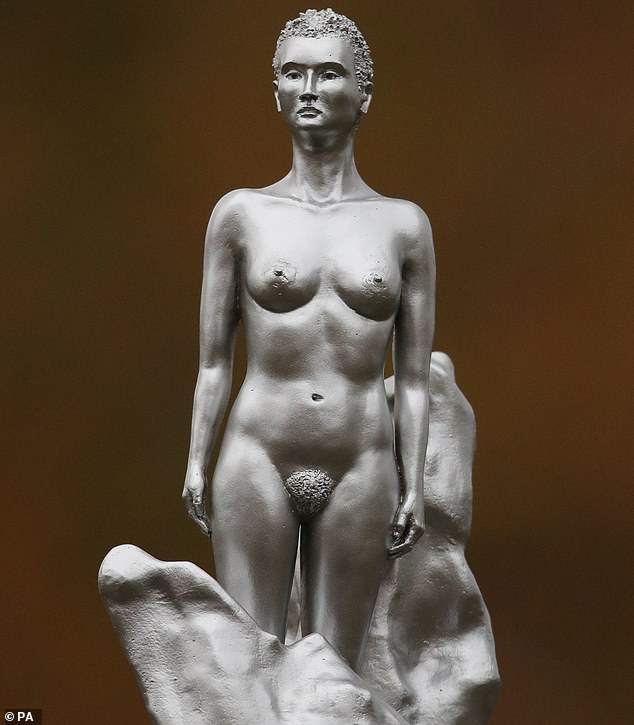 For years we have sailed past these eyeless figures of stone or bronze in public places without thinking much about them. Now they are being turfed into harbours, torn down, argued over. And the she-statues are always the most contentious

She appeared to be holding up a teacloth emblazoned with the words Courage Calls To Courage Every-where. Very nice, love, but waving it about isn’t going to get those dishes dried.

And now the Mary Wollstonecraft statue by Maggi Hambling has caused uproar amongst feminists, who object to their heroine being depicted as a tiny silver doll with a Barbie bust and luxuriant pubic hair. (Either that, or she has a miniature head of broccoli protecting her modesty.)

Miss Hambling’s sculpture is deemed a dud — but if everyone is talking about it, surely that is a success of sorts?