Should alcohol be banned on planes? Loose Women panel divided over booze ban with Denise Welch claiming people should be able to go without for a few hours despite admitting she used to be a ‘real caner’

The Loose Women panel divided opinion after discussing whether drinking should Sbe banned on planes.

Kay Adams, Denise Welch, Jane Moore and Kéllé Bryan had a debate on the issue after it was  revealed American Airlines and other carriers have banned alcohol sales on board.

Denise Welch, who has been sober for ten years, said she hoped drinking on scheduled flights would be banned, and that people could go without a tipple for a few hours.

Jane Moore disagreed and said people shouldn’t be ‘punished’ with a ban because of a few disruptive passengers.

Viewers were split over the issue with some siding with Denise and others agreeing with Jane, 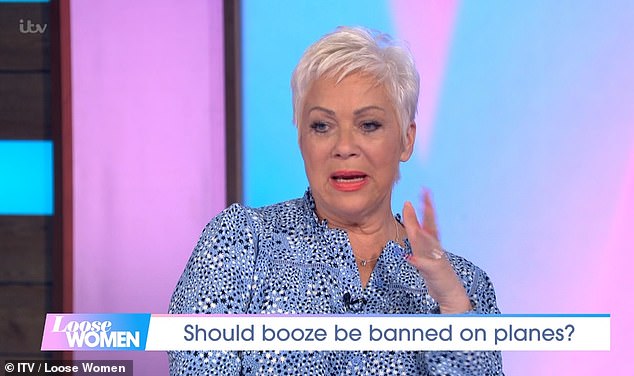 ‘The majority of us are well-behaved, law-abiding people,’ Jane argued, saying it was nice to be able to enjoy a glass of wine on a plane.

‘Why should we be deprived of that because of the misbehaving few?’ she added.

She went on to say that if drinking is banned on planes, it should be aslo then be banned in airports, to minimise disruption from people who are already drunk when they board the plane.

‘Banning is an issue for me, we just need to have tighter regulations,’ she said. 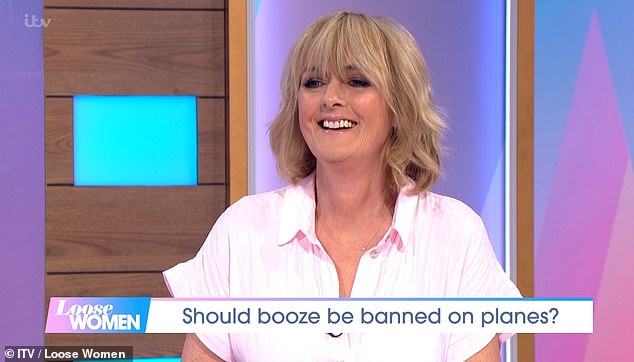 Jane Moore, pictured, said she was against banning alcohol completely, but suggested stricter restrictions should be introduced against ‘rowdy’ behaviour

Denise was of the opposite mind and said she wished people wouldn’t be allowed to drink onboard.

‘Some people will call it rank hypocrisy and it may well be, as somebody who made no issue of the fact I had terrible issues with alcohol and I was a real caner,’ she said.

‘But I was never an airport or plane drinker,’ she added.

‘On a chartered flight, much more than a scheduled flight, I dread the drunkenness on the plane, I do,’ she said.

‘I would love it banned in airports and airplanes because I feel sorry for the staff, I’ve seen them many times be abused,’ she added.

Kéllé said she didn’t want alcohol to be banned on planes, but agreed regulations and structures were needed. 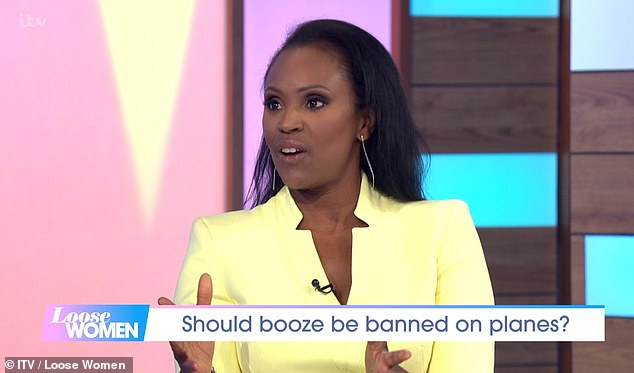 Kéllé Bryan, pictured,  said there should be a cap to the number of drinks passengers are allowed to consumed on a plane

‘I don’t think it should be banned, there are people who abuse the freeness of the alcohol, and say, “Oh it’s free, I’ll have another one”.

‘You can’t move to banning it completely, you got to move to being a bit more measured, so there’s a limit. Maybe one or two,’ she said.

‘But when you’re a drinker, when you’ve had one pint of Snakebite, you don’t want to be told you can;t have another two,’ Denise argued.

Kéllé argued members of staff should stop serving people when they’ve reached their limits of drinks.

‘But this is when they say “you can’t have anymore sir or madam” and those people really kick off,’ Denise said.

‘I think if you have rules in place; we don’t have people fighting to smoke on a plane, do you, those rules are established,’ Kéllé said. 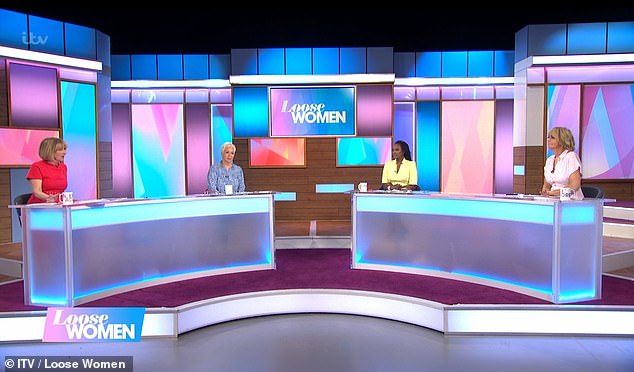 The panel, pictured, was split on whether alcohol should be banned, but Denise argued airline staff were being abused by drunken passengers

‘If your behaviour as a consequence of alcohol consumption puts somebody else’s safety at risk,’ she went on, repeating she was not in favour of a complete ban but more regulation.

‘If Bill and Gladys drink moderately and they like going on their one holiday a year,’ Jane said.

But Denise cut her to say ‘Bill and Gladys’ should be able to wait until they’ve arrived at their destination to enjoy a drink.

The issue divided viewers, and some agreed travellers should be able to go without drinking in planes.

Some viewers said if people couldn’t go for a few hours without a drink, they needed to consult Alcoholics Anonymous

‘You don’t need alcohol on planes. Simple,’ one said.

‘So everybody has to suffer for the few. This is becoming a thing,’ another said.

‘I’ve never drank on a plane. I’m amazed they ever let it in the first place,’ said another.

‘Jane is right. Why should a minority ruin it for everyone else? Sort out those who can’t control themselves rather than punish the rest of us,’ another wrote.

‘I don’t want to sit on an aeroplane while there’s a flight Marshall telling a group of rowdy dickheads they can’t have another drink. It’s a couple of hours. If you can’t wait it’s not a holiday you need it’s Alcoholics Anonymous,’ one said.