Home » India ban has shamed Liberals, but not enough for many to speak out against it

Andrew Bolt, perhaps the country’s most influential conservative commentator, has for 30 years been a thorn in the side of many a Liberal leader.

Unlike many of the new brigade of reactionary, populist conservative mouthpieces, the man himself appears to believe in things. Agree with them or not, he more or less takes on a consistent view whether it’s popular or not. He rarely bends or panders. 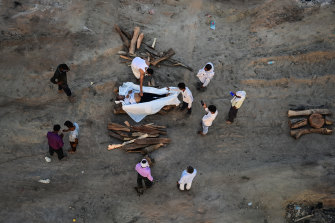 Relatives perform the last rites for the cremation of a man who died after contracting Covid-19 on the banks of the Ganges river in Allahabad, Uttar Pradesh, India.Credit:Ritesh Shukla/Getty Images

“When Andrew Bolt is calling us racist, perhaps there’s a need for some self-reflection,” one Liberal MP said of Bolt’s barnstorming Monday column, which decried the Morrison government’s threat of five-year jail terms for Australians trying to return home from India as “shameful”.

On the pages of the News Corp Australia’s tabloids, Bolt thundered that the policy was “so mean and irrational” that he must also blame “racism”.

“It should mean something to be Australian. It should mean that when disaster strikes, wherever you are in the world, Australia will try to save you.”

Not that those within the Coalition party room who are uncomfortable about the latest decree needed to hear it from Bolt. Quite the opposite. From early Saturday morning a handful of MPs, spanning from inner-city progressives to Queensland conservatives, were beside themselves.

Australia has made it through the pandemic remarkably well. Much of this is the advantage of being an island nation but governments have taken a hardline on issues such as lockdowns. This may have halted the spread of the disease but the COVID-19 pandemic has sparked a slow creep of petty bureaucratic authoritarianism within Australian politics – mostly under the guise of “expert medical advice”.

Bit by bit individual liberties have been curtailed and, mostly, that’s been accepted by Australians as for the greater good.

Even the fiercest defenders of freedom and liberty in Canberra have had to bite their tongues.

Mostly the fights have been down partisan lines. Blue team thinks the red team has overreached. Red team thinks the blue team is careless. Those who’ve put their families’ health and wellbeing first have largely supported the nation’s leaders.

But the increased willingness of governments to curtail personal freedoms has now made some question their own judgment of what they previously distinguished as right and wrong.

Borders shut, planes grounded, restaurants closed, curfews, strict exercise limits, rationing of toilet paper in supermarkets. Cars were pulled over by police to ask why they’re out past 8pm. Leaving the country even became illegal without a government-issued permit.

Many of these decisions were taken without cabinet, party room or parliamentary debate. The latest decree, threatening five years’ jail or a $66,000 fine for an Australian citizen attempting to return from India, was announced in a midnight email without a media conference. That tells you a bit about how the government thought the decision would go down.

While the Commonwealth bears its fair share of responsibility, perhaps the most intrusive stances until now were made at a state level.

In Victoria, a young pregnant mother was handcuffed in front of her children for promoting an anti-lockdown rally on Facebook. Last July Premier Daniel Andrews locked down nine public housing towers on a whim, leaving some residents without food and medicines.

Even those who marched for the rights of refugees on Manus Island and Nauru were saying the shutdown was “for the greater good”. Apart from a handful of voices, it took the state’s ombudsman to condemn the act with any real gusto finding it – like the city’s nightly curfew – was not based on direct health advice and violated human rights laws.

Police later defended the use of drones to enforce social restrictions in public places such as parks. And once again the left side of politics appeared largely subservient. On New Year’s Eve thousands of Victorians – many who hadn’t been near a declared hotspot – were locked out of their own state for days.

In Perth and Brisbane, Adelaide and Hobart, the borders were shut off for weeks at a time – sometimes on health advice and sometimes, it would be seen, in crude acts of populism.

Some premiers lifted them as soon as they could, eager to kick-start their fragile economies, but buoyed by record-high levels of parochialism others cynically kept them shut and capitalised in landslide election victories.

The brutal measures have taken state and federal politics to a new place. What were once unimaginable actions are now readily available as political tools – all under the cover of “keeping Australians safe”, as a string of prime ministers have reminded us is the number one priority for governments.

And it’s left some unwilling to pick a fight. When mighty nations such as Britain and the United States have been brought to their knees by the pandemic, Australians don’t take too much convincing that these actions have saved lives.

But to deny a right of return for a nation’s citizens to their homeland? Surely a line in the sand.

Many federal Liberal backbenchers were sheepish when answering phone calls this week and were not prepared to speak on the record. Mainly because it would be viewed as a black mark against them by their PM.

“Look, of course I hate it, but what’s the point of picking the fight? It’s not going to achieve anything,” was what more than a dozen conceded privately this week in response to the India decision.

For members of a party founded by Robert Menzies to fight for the freedom of the individual and to produced enlightened liberal policies, these past 12 months have eroded those values.

Another MP pondered: “Is there any line we won’t cross? First we’ve become a country for exit permits like the old Eastern bloc, now we’re criminalising returning home?… I’d love to see that tried on in court.”

[On Monday the Federal Court will hear an urgent challenge to the India travel ban lodged by lawyers for Gary Newman, a 73-year-old Australian man stranded in Bangalore.]

Members and senators who felt strongly enough to express their views directly to the Prime Minister or his office over the weekend were told exactly what the public was told this week. Their objections were acknowledged, politely, and they were assured the threat would be issued “responsibly” and “proportionately”. It was more about sending a message to the airlines, they were told, and not about locking up Australian citizens for committing that heinous crime of wanting to come home.

“This is a way to ensure that we can prevent the virus coming back and it starting a third wave here in Australia,” Morrison said this week. “That would have devastating impacts on our country.”

While many MPs have decided to remain quiet, having made a strategic decision to not pick a public fight with their boss, others couldn’t help themselves. For Nationals senator Matt Canavan, who has found himself in the political wilderness since quitting the frontbench to back Barnaby Joyce’s challenge for the leadership last year, it was one step too far.

Canavan pointed out that 12 months earlier Australia had celebrated the collaboration between the government and Qantas to help stranded citizens in Wuhan return.

“This pandemic has not only removed us of our freedoms it seems to have robbed us of our humanity towards each other,” he says.

But other, more nervous, MPs who dared to publicly offer their views had a bob each-way.

Deputy Prime Minister Michael McCormack went through the motions of defending it on breakfast television and conceded the decision went “probably too far”.

But Labor premiers, who had for years criticised the federal Coalition’s harsh immigration policies went silent, having borrowed Canberra’s own border politics and used them to their own advantage for the past year.

Even federal Labor MPs have been tied in knots, having been scarred too often by the politics of border security. Only former leader Bill Shorten had the instincts to immediately call it as he saw it, questioning why the government was “choosing to turn this into their political Tampa moment” when there were Australian citizens at risk of death in another part of the world.

“I think that whilst at the moment Morrison’s rhetoric may gain some favourability, in the test of time, I think this will not be viewed as Australia’s finest moment,” he said.

Some others, such as his former deputy Tanya Plibersek, mustered the courage to condemn it.

Governments across the country seized the ability to make such decisions at a moment’s notice through emergency laws, public health orders and federally, under the Biosecurity Act. This power overrides any other law although legal experts doubt its constitutionality.

Around the world governments have followed suit, suspending usual democratic protections and ruling by decree. But no country in the world has attempted to prevent, by law, its own citizens from coming home.

While the federal budget will likely next week overshadow any internal unrest, the events of the past few are likely to spark a new push to limit authoritarian restrictions that many believe have ultimately done more harm than good.

NSW Liberal senator Concetta Fierravanti-Wells, who conceded she was “troubled” by the decision to make it illegal for Australians to return home, has previously warned against the growing number of decisions that are exempt from parliamentary scrutiny.

A Senate committee recommended last December that Biosecurity Act decisions such as the Indian ban should be subject to debate and disallowance in Parliament.

And at the height of the second wave last year, when many Australians remained fearful for the health and safety of themselves and their family and friends, Senate President Scott Ryan warned the Senate of the unvetted “unilateral action” from executive governments.

“The approach taken during this public health crisis will doubtless set precedents that will be looked to in the future,” he said, reported by The Canberra Times in August. “We all know and, indeed, support the public health messages that outline the need for caution, as this pandemic will likely be with us for some time, but the national Parliament is a critical part of government.”

If Coalition MPs next week dare to show some courage and voice their private objections to the extraordinary decisions taken by their government they might well find they are far from isolated.

But if they do not speak up perhaps they should reflect on the words of their colleague, Senator Ryan, in that same address last year.

“Principles not defended in difficult times are in effect mere customs or conveniences.”