More than 120 doctors and health workers are calling on a prominent philanthropic charity to halt its plans for a large quarry in bushland on the Mornington Peninsula, citing concerns over the health effects of silica dust on nearby primary school students and communities.

Hillview Quarries, which is owned by the philanthropic Ross Trust, has applied to expand a disused quarry adjacent to the Arthurs Seat State Park and remove about 38 hectares of native bushland, an area the size of Melbourne’s Royal Botanic Gardens.

In an open letter in today’s Age, 122 signatories – including respiratory and allergy specialists, eight paediatricians and 29 local general practitioners – write: “Our children and grandchildren and the wider community deserve certainty that the air they breathe is safe.”

“There is ample evidence that silica exposure is dangerous in an occupational setting [but] little is known so far about how silica exposure affects people outside this setting. We believe that the risks are serious.”

Silica dust is generated in workplace mechanical processes such as crushing, cutting, drilling, or grinding natural stone or man-made products that contain silica.

Hillview Quarries operates a smaller quarry in Dromana on the Arthurs Seat escarpment. The new quarry would be 190 metres deep and could produce 70 million tonnes of granite products over 70 years. 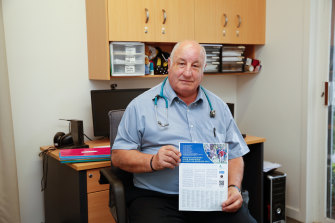 Mornington Peninsula paediatric allergist Dr David Bannister was one of the organisers of the open letter opposing a new quarry.

Mornington Peninsula paediatric allergist Dr David Bannister helped gather the signatures and co-authored the letter. He said that having looked at the medical research, he was worried about potential health impacts for his young patients.

“Having children growing up so close to a massive quarry is potentially playing Russian roulette with their health,” Dr Bannister said.

The local branch of the Australian Education Union has passed a resolution opposing the proposed quarry.

Local parent Elizabeth Dodd said if there was even the slightest risk that children could get sick from this new quarry, the proposal should be pulled immediately.

“If the Ross Trust truly cares for the community, they won’t let this go ahead,” Ms Dodd said. 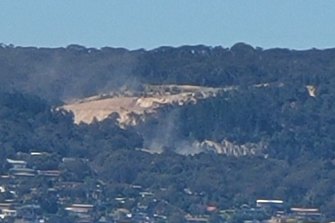 A photo from a local resident shows dust drifting up from the existing Hillview quarry.

The Ross Trust was established in Victoria in 1970 through the will of Roy Ross, an investor and entrepreneur who amassed wealth through investments in mining and media.

Hillview Quarries is operated by the Ross Trust to generate income to distribute for charitable purposes. Since its inception, the trust has distributed $118.5 million in grants. It is the only philanthropic charity in Australia that funds its grants through the proceeds from a quarry.

Today’s open letter in The Age is also addressed to Victorian politicians, including Premier Daniel Andrews, Treasurer Tim Pallas and Planning Minister Richard Wynne. The advertising space in The Age was paid for by the Peninsula Preservation Group, a community organisation leading the “Save Arthurs Seat” campaign.

The Ross Trust and Hillview Quarries say they have been a part of the peninsula community for more than 50 years and have a proud history of supporting many causes, including environmental projects and preservation of the natural environment.