Home » ‘Give her job back’: Readers respond to the treatment of Christine Holgate

Christine Holgate came out all guns blazing this week, looking for an apology over the way she was treated over her 2018 decision to give four staff Cartier watches after they secured Australia Post a $220 million deal.

When the staff bonuses were revealed late last year, Morrison declared he was “appalled and shocked” by Holgate’s actions and said the postal service chief executive could “go” if she refused to stand aside for an inquiry into the gifts.

As political reporter Lisa Visentin reported in her article, ‘Humiliated by our Prime Minister’: Christine Holgate says Scott Morrison cost her Australia Post job, Holgate told a Senate inquiry into her departure, that these remarks, together with the lack of support she received from the Australia Post chairman, made her position untenable. 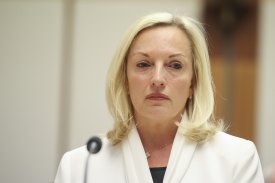 Holgate said she contemplated suicide as a result of the bullying and intimidation she endured.

“I lost a job – a job I loved – because I was humiliated by our Prime Minister for committing no offence and then bullied by my chairman Lucio Di Bartolomeo, who unlawfully stood me down under public direction of the Prime Minister,” she told the hearing on Tuesday.

Morrison said later this week he regretted the distress his “strong language” caused Holgate but refused to issue an apology. He said he still believed the Cartier gifts were inappropriate and denied his treatment of her was sexist.

“This was about taxpayer organisations handing out Cartier watches to well-paid executives. This has nothing to do with gender,” he said.

Di Bartolomeo rejected many of Holgate’s accusations but conceded she was treated “abysmally” over the matter. He insisted the Australia Post board does not owe her an apology.

Many readers agreed with Holgate that the treatment she encountered, particularly by the Prime Minister on the floor of Parliament, was heavy-handed.

Soul Trap: “Scapegoating anyone under the protection of parliamentary privilege is a particularly low move, regardless, and totally highlights this government’s lack of spine and its acceptance of toxic workplace cultures as normal.”

Dani: “I was shocked by the aggressive tone and venom when Scomo spoke about Christine Holgate in parliament. It was disgraceful. I wish her well.”

Relotra: “Give the woman her job back with compensation and a public apology for bullying her publicly and wrongly sacking her.”

Seen it coming: “What chance does the average postal worker, or any person really, have when the CEO can be so easily discarded on a whim. It is another disgrace for this government in a long line of them.”

Gds Gds: “So the chairman thinks Holgate was treated abysmally but he still doesn’t think he owes her an apology? I’ve got an idea, get rid of the chairman and give Holgate his position.”

only a little nuts: “Can only add to the chorus of opinion here that Ms Holgate was treated appallingly.”

On the issue of whether Holgate was treated that way because she’s a woman, the views were mixed.

Rural Jack: “Holgate made the serious mistake of not being a male.”

The Truthseeker: “I think the PM overreacted to the Cartier watch affair and CEO of Aust Post was a casualty and deserves an apology. I have no reason to believe that the PM would have reacted differently had it been a man. I also don’t believe this would be such a big story (and far few people commenting) if it was a male CEO claiming to have been bullied. This is also wrong. We cannot have true equality until we remove double standards and expectations.”

Miss Fit: “She was hard done by, no doubt, and should be compensated accordingly. But to suggest it’s because of her gender is tiresome and trite. Malcolm Turnbull received similar treatment in the last week and we all accept it. Politics is ruthless.”

phil: “Blaming Morrison is so predictable, boring and wrong. Calling for her to be sacked now constitutes ‘bullying’? Afraid not. Making it about gender is a cop out.”

Visentin says Holgate has successfully reclaimed the narrative around her exit with her testimony this week.

“The question is no longer whether the gifting of Cartier watches was appropriate but whether the punishment fit the crime,” she says.

And the engaged public, Visentin says, appears to be in Holgate’s corner.

“The timing, of course, could not be worse for Scott Morrison, who is still reeling from a wave of outrage at his stumbling response to the alleged mistreatment of women within government ranks and society more broadly,” Visentin says.

Some readers did question Holgate’s judgment in her reward of Cartier watches. For others, the reaction to the staff bonuses reeked of double standards, many readers citing other recent examples of largesse that seemingly went unnoticed.

Billcamm: “I completely agree with Holgate. On the other hand, should companies really reward any individual employee, over and above others, for just doing their job? I thought was what salaries are for.”

Kristen.herplace: “None of this would have happened if a simple ‘thank you’ was offered rather than bonuses for doing nothing more than the jobs they were being handsomely reimbursed for.”

Really?: “And yet to those companies that have taken millions in Jobkeeper, taxpayer funds, when their companies made record profits, the PM is silent.”

ICSBSS: “I can’t believe how ridiculous it all became over four watches. In the scheme of things their cost pales in comparison to some of the abuses of taxpayers’ money our politicians get up to.“

pollyho: “Morrison attacks a woman for giving Cartier watches yet says nothing about the NBN giving its executives wads of cash. No doubt about it Morrison has a woman problem.”

nicekitty: “I don’t know why she was sacked when the people responsible for paying triple the amount for parcels of land were not. I don’t believe it’s a gender thing – I think she’s done or said something that upset someone.”

Meanwhile, other readers were just struck by the short-term memory of others.

Truie: “Interesting to see how many commentators here are saying she didn’t do anything that bad however, at the time, I recall there was public outrage over her decision to reward the executives and calls for her to go. Funny how now, it’s all about Scomo. Personally, I think she got hung out to dry by the government, Australia Post and, a significant proportion of the Australian public.”

Visentin agrees that against this turning tide, others have also had to scramble to reposition themselves.

“At the time, Albanese was intensely critical of Holgate’s actions, saying she deserved to ‘pay a price’ and welcomed the news of resignation as ‘perfectly reasonable’,” she says.

“His refreshed take this week was that Mr Morrison had ‘effectively sacked Christine Holgate on the floor of the Parliament’.”

Online readers of The Sydney Morning Herald and The Age made 30,092 comments on 472 stories in the past week.

Most-read by subscribers in the past week