Home » Lifestyle » Get back: Scott Morrison building his re-election on old hit tunes

On the face of it, a three-part documentary series that runs for eight hours featuring four young men joking, disagreeing, reminiscing, discussing what they watched on TV, and reading from newspapers while rehearsing and recording a bunch of new songs before performing a few of them on an office building roof in front of an audience of none sounds like a pretty poor investment, especially since it was filmed 52 years ago.

But the young men were the Beatles, which meant the series, Get Back, was a highly anticipated global media event watched by millions of people on its release late last week. The band is definitely ancient news: it split in late 1969 and the quartet never regrouped. Only two members survive. So why the fascination? 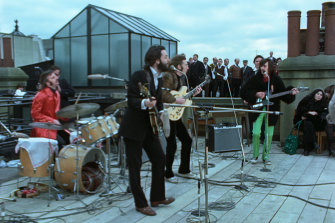 The Beatles at their legendary final performance together, which concludes the epic documentary Get Back.Credit:Apple Corps

As a snatch of studio dialogue concluded the series – with Paul McCartney suggesting yet another take of his song Let It Be for a bit of insurance and John Lennon playfully responding, “We’ve got so many of the bastards!” – I was reminded of something that perhaps only those of us who were lucky enough to be around when the Beatles were a contemporary act can fully comprehend: their cultural power was always drawn not just from their music but from their personalities too.

It’s always the case that musical artists’ personalities shape and inform their product, even if they’re a tricked-up puppet of a producer and writing team. In that case, they’re presenting themselves as being all artifice, a combination of marketing and styling, and that’s an important part of the act.

The Beatles wanted none of that. Apart from taking the advice of their manager early on to smarten up by wearing suits and stop mucking about on stage, they were set on going their own way and were determined to be known for their own material. They were also dedicated to never repeating themselves; if something worked, they pocketed the success and looked to do something new.

Importantly, they were a group – a rare thing in the days of solo artists with backing bands. Their set-up was more of a benevolent dictatorship than a democracy, something captured in Get Back when George Harrison, the youngest member, walks out after being patronised by McCartney and Lennon. Even so, the Beatles were a wonderful example of gestalt, their collaboration consistently creating something bigger than the sum of the parts.

As someone who writes about politics, the Harrison walkout intrigued me. At first, Lennon and McCartney tried to shrug it off but eventually were deeply shaken. They acknowledge that their blinkered egotism has injured Harrison. Harrison returns to the group after the others agreed to resume rehearsals at a different venue and drop grandiose talk about performing for a live audience. McCartney and Lennon realised they had to pull their heads in and compromise.

Watching this story unfold on my TV on the weekend, I was put in mind of the reports of Scott Morrison’s unscheduled meeting with Bridget Archer after the Liberal MP crossed the floor to support debate on a national integrity commission. What a documentary that would have made: a series of ambushes involving the PM, his Liberal deputy Josh Frydenberg and Marise Payne, who some readers might not know is the minister responsible for the portfolios of women and foreign affairs, given her aversion to publicity. Some pretty discordant music flowing from that encounter, in the style of Yoko Ono rather than the Fab Four.

It’s difficult to see the Morrison government as a band that follows the Beatles model, with everyone contributing and, for the most part, staying tight. It’s more of a frontman with a carefully crafted persona plus enabling sidemen and sidewomen. And as we have unofficially begun the 2022 federal election campaign, it’s pretty clear the Prime Minister has no Beatle-esque aversion to repeating himself.

In fact, he’s building his act on the hits that made him a surprise smash in 2019, plus extensive market research to see what tweaks might work with the audience. When he volunteers that the ALP is on the side of the Chinese or that it will make petrol more expensive than it already is under him, it’s pure focus group stuff. So too is the recent “governments need to get out of people’s lives” line. 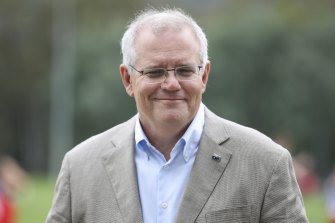 Politics and the music industry aren’t the same, obviously. Lives and livelihoods won’t be lost if a tune fails to get enough Spotify traffic. But political leadership, like any activity that looks for public endorsement, does hinge on personality, originality and purpose. The prime ministers who did it their way, such as Bob Hawke and Paul Keating, or those known for having a firm set of philosophical beliefs such as John Howard, are the ones who continue to have standing.

But in the end, personality trumps everything. Those who presented themselves as having certain qualities and then failed to display them are less well-remembered. Kevin Rudd’s manic side and bouts of indecision did him in. Julia Gillard looked supremely confident until she became PM and was immediately gripped with self-doubt, giving her a wobbly start that fatally weakened her authority.

Tony Abbott was a formidable opposition leader who couldn’t escape that box. Malcolm Turnbull was so driven and committed to being prime minister that he submerged his innate liberalism to win over his conservative Liberal colleagues, leaving both wings of his party feeling dissatisfied.

Morrison’s “cheery neighbour” persona has lost its lustre as the quickness of his temper, his focus on controlling his government and his party, and his willingness to manipulate the truth about what he’s said or done have become more evident. They might not affect his ability to retain power next year, but they do suggest his act is getting tired, with consequences for his prime ministerial legacy.

When he and his current bunch of hitmakers have shuffled off, how will they be regarded: as the Beatles or the Bay City Rollers?

Shaun Carney is a regular columnist.