The first images have emerged of the residential tower that could rise on the site of the Corkman Irish Pub in Carlton, which was demolished illegally in 2016.

The designs were produced as part of negotiations between Planning Minister Richard Wynne and the two developers who knocked down the pub without planning permission. 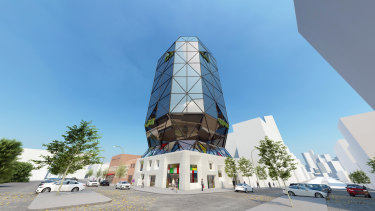 Stefce Kutlesovski and Raman Shaqiri have proposed an apartment tower up to 20 levels – the highest possible building that could be constructed under planning rules for the site.

One design by architects Peddle Thorp shows a futuristic glass tower with a cafe and function centre on the lower floors. 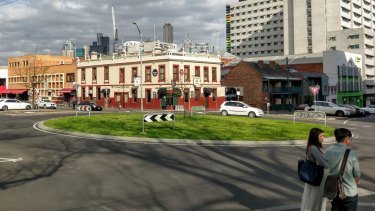 The pub in 2016 before it was knocked down.Credit:James Bowering

Shaqiri said on Thursday that Supreme Court judge and VCAT president Michelle Quigley had given them jail time for political reasons.

“It’s just political – if they are going to put me in jail for 30 days for trying to do something, then so be it,” he said. 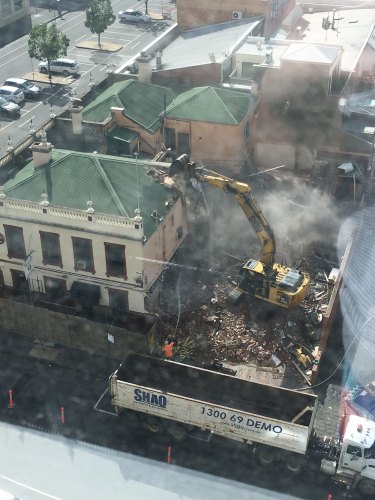 Raman Shaqiri’s company Shaq Demolition pulls down the pub in 2016.

Shaqiri’s company Shaq Industries demolished the pub on a Saturday in 2016 and, despite orders from Melbourne City Council to cease the works, came back on Sunday to finish knocking the building down.

Shaqiri has since lost his demolition and building licences, with the Victorian Building Authority stripping him of both this month. 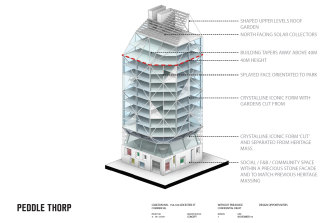 A concept plan by architects Peddle Thorp of a tower that could be built on the Corkman site in Carlton.Credit:Peddle Thorp architects

As part of the pair’s negotiation with Mr Wynne over the site, they were required to not only come up with a plan for a temporary park but also for what they might later build on the land.

Kutlesovski said on Thursday he wanted to develop the land, not sell it.

“There won’t be a price that would make me sell it.” 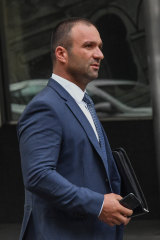 Shaqiri and Kutlesovski paid $4.76 million for the Corkman pub in 2015 and knocked it down the following year. The land without the pub on it would now fetch around $10 million.

Kutlesovski said the notoriety knocking down the historic pub had brought him would follow him around for the rest of his life.

The pair has now been fined almost $1.5 million by the courts and VCAT.

A spokeswoman for Mr Wynne said the government would consider community feedback on any final plans that were lodged for the site. 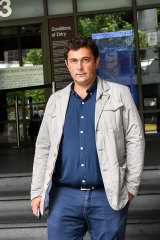 “If a permit is not approved by June 2022, as required by VCAT, the developer will have to rebuild the pub at their own expense,” she said.

The National Trust’s Victorian chief executive Simon Ambrose commended the custodial sentence for the two developers, but said the community was “yet to see justice for the complete loss of its valued cultural heritage”.

He said it was a pity the current laws meant there was no mechanism to require the two men to simply rebuild the building they demolished.

“The proposed building therefore provides little comfort to the National Trust and so many others in the community who continue to be appalled by the actions of these developers, and
their failure at every turn to comply with their obligations under the law,” he said. 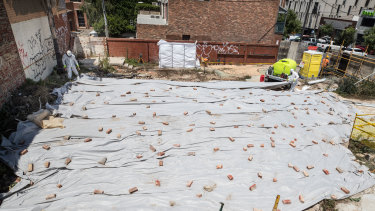 A crew removes further small remnants of asbestos from the Corkman site in Carlton on Thursday.Credit:Jason South