Chino Moreno longs for how cities transform at night. The frontman for the veteran American alternative metal flagbearers Deftones has spent the past 12 months travelling between his home in Portland and writing sessions with his bandmates in Los Angeles, Seattle and the group’s starting point, Sacramento. But wherever he is, Moreno has the same routine late in the evening when he’s trying to wind down. 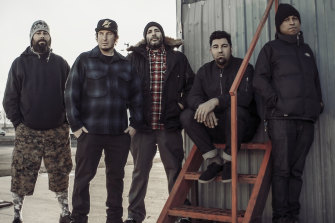 Deftones will be in Australia this month, playing at Download festival.

“There’s something calming to me about cities in general,” Moreno says. “At night when I walk around I put my earbuds in and that’s kind of an escape – I’ll put on ambient music or jazz, so that when the high-rises are lit up, as dirty as a city can be there’s also a feeling of looking at a different world. That vibe always inspires me, not to make music like what I’m listening to but just making me feel inspired inside.”

Moreno, whose voice can be a galvanising force for Deftones whether channelling cathartic urgency or regret-laden soliloquies, has helped bring a similar fluidity to the band’s sound. Blurring the lines between genres and movements, Deftones have long detailed a style that is fierce but fluid; when they assembled their B-sides for a 2005 compilation the artists covered included Cocteau Twins, Helmet, Sade and Lynyrd Skynyrd.

“When we get together to make music it’s very rare that we’ll say, ‘we’re going to make a record that sound like this’, or ‘we’re going to make a song about that’. We never have pre-conceived ideas, instead we’re interested in making sounds and generating moods,” Moreno says. “What we do is that we’ll write between 12 and 16 songs, no more and no less, so within each one we want to give off a mood. I don’t know what it will be, but we won’t stop until we have 12 different moods on an album.”

That approach has nourished Deftones following: their new metal outlasted Limp Bizkit’s nu-metal. The band – Moreno, guitarist Stephen Carpenter, drummer Abe Cunningham, bassist Sergio Vega, and keyboardist and turntablist Frank Delgado – have sold 10 million albums since their debut, Adrenaline, was released in 1995. In the wake of their shape-shifting third album, 2000’s acclaimed White Pony, which reached the top three of the charts in Australia and the US, they’ve remained a major concert and festival drawcard.

"We’re older (and) we all live in different cities so  when we do get together it’s an electric moment.

With its clannish fandom and tightly held allegiances, heavy music rewards endurance. While the burgeoning scene is constantly replenished by a stream of breakthrough acts, from Byron Bay’s Parkway Drive to American punk experimentalists Code Orange, the genre’s biggest events are dominated by veteran artists, starting with Metallica and Iron Maiden, who are now drawing multiple generations to their own stadium shows.

Deftones are returning to Australia for Download Festival, a hard rock and heavy metal gathering that’s been a signature event in the UK since 2003 and is now in its third year here with outdoor bills on consecutive days in Melbourne and Sydney. This year’s headliners are My Chemical Romance, the gothic-tinged outfit behind the hit 2006 concept album The Black Parade who reformed in 2019 after a six-year absence, fervent alternative rock quartet Jimmy Eat World, whose signature tune The Middle came out in 2001, and Deftones.

It’s been a long and occasionally difficult journey for Deftones, who put Sacramento on the cultural map long before Greta Gerwig premiered Lady Bird. Moreno was a teenage skateboarder with Mexican and Chinese heritage listening to hardcore punk (Bad Brains) and British synth pop (Depeche Mode) when he formed the band with high school friends Carpenter and Cunningham in 1988.

That detonated years of relentless gigging and a sound that evolved as they added polymath bassist Chi Cheng, a poet and musician who had to be replaced by Vega in 2008 after a serious car accident left him in a coma that ultimately led to his death in 2013. The 46-year-old Moreno has now been playing music with Carpenter and Cunningham for two-thirds of his life, a connection that has been influential even as they’ve redefined it.

“What we’ve figured out is that after being kids, when we spent a lot of time together every single day in the same rooms in the same neighbourhood, and then being young men who spent years together in the same van and then the same bus,” Moreno says, “is now that we’re older we all live in different cities so when we do get together it’s an electric moment.”

The album Deftones plan to release later this year will be the follow-up to 2016’s Gore, and the writing sessions have been a series of week-long summits, where they lock themselves away to hone ideas that can be soaring or scything. Instead of being routine, just another successful band grinding the writing gears again, the songwriting collaborations comes with a spark that Moreno has come to deeply value.

“That’s been an organic way for us to make music which has been fun – because you don’t know what will come of it – for a long time now,” Moreno says. “It contains us to who we are as people and musicians and that’s our palette. It’s always let us move forward and remain ourselves.”

Deftones play Download Festival at Melbourne Showgrounds on March 20 and The Domain in Sydney on March 21. They also headline at Brisbane's Fortitude Music Hall on March 18 and Thebarton Theatre in Adelaide on March 23.