Farmers are threatening to pull support from the federal government’s drive to set more ambitious emissions reduction targets unless the Nationals deliver them payback for land rights and profits they say were stolen nearly 20 years ago under the Kyoto agreement.

The demand from the National Farmers Federation and Queensland lobby group Agforce comes a week before a crucial Nationals party room meeting on October 17. Energy and Emissions Reduction Minister Angus Taylor is expected to present a long term emissions reduction plan at the meeting and a vote will be held to determine support for more ambitious climate targets. 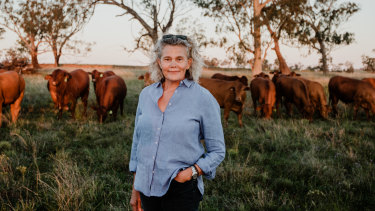 National Farmers Federation president Fiona Simson is calling for the federal government to “fix the ledger” on land clearing rights.

The farm groups will address a federal Nationals party room meeting on Monday and will call on the regional politicians to “fix the ledger” for policies set by the NSW and Queensland governments that left a “festering sore created by the statutory theft”.

The federal government is under international pressure to increase its emissions reduction target at the United Nations climate summit in Glasgow next month. Australia’s current commitment is to reduce emissions by at least 26 per cent by 2030, based on 2005 levels. Australia has no deadline to reach net zero, but Prime Minister Scott Morrison has indicated he wants to set a 2050 target, but he needs the Nationals to agree.

Treasurer Josh Frydenberg said last month the cost of international capital Australia relies on would go up as global investors factor in the risks of climate change and turn away from polluting industries and countries without ambitious emissions reduction goals.

Resources Minister Keith Pitt responded last week with a call for $250 billion to underwrite investment and insurance costs for the resources sector to stop jobs losses in coal and gas if the government sets a target for net zero emissions by 2050.

Nationals senator Matt Canavan opposes net zero and said Australia should reject the international push even if the cost of capital rises and “we are forced to pay a little bit more on our mortgages”.

Their grievance began in 1998 when former prime minister John Howard won out against international opposition during negotiations over the Kyoto protocol, a precursor to the Paris Agreement where nations pledged to reduce greenhouse gas emissions.

The Howard government negotiated the inclusion of the infamous Australia clause in the terms of the agreement. It meant emissions created by cutting down trees, which reduces the amount of carbon stored in forests, could count towards Australia’s target.

This move paved the way for new laws restricting land clearing that boosted Australia’s emissions reductions under the Kyoto agreement, which were imposed by state governments after Mr Howard delivered federal funding.

The restrictions on land clearing meant enough emissions reduction came from farmers to meet Australia’s overall Kyoto target, and other polluting industries like mining and energy could carry on with business as usual.

Farmers have been fuming ever since. They say expansion plans were killed and property values cut while they were unable to realise the potential of their land in carbon credit schemes like the federal government’s $4.5 billion Emissions Reduction Fund.

“It still hurts and now is the time to square the ledger,” said National Farmers Federation president Fiona Simson.

Most major agricultural industries including red meat, cropping and irrigation support net zero targets for as early as 2030. But Ms Simson said farmers support for new climate policies was contingent on “appropriate redress for the land clearing policies”.

“Fixing this will go a long way to ensuring farmers are enthusiastic participants and supporters of future emission reductions solutions,” she said.

The Business Council of Australia on Friday called for the government to set a net zero by 2050 target, including emissions cuts of up to 50 per cent by 2030, based on 2005 levels.

Climate Council senior researcher Tim Baxter told this masthead previously that changes to land use, which came from the Kyoto-era land clearing restrictions, had delivered the “vast majority of emissions reduction”.

Annual emissions have fallen by about 122 million tonnes since 2005 and emissions from changes to land use made up 111 million tonnes of the total. Mr Baxter said agriculture, with help from renewable energy, had done the heavy lifting while emissions from other industries are either increasing or flatlining.