All is calm, all is BRIGHT! Couple’s Christmas light display involves 150,000 bulbs and is so dazzling RAF pilots use it as a landmark

A family known for their incredible Christmas decorations have unveiled this year’s effort featuring twinkling trees, light-up puddings and Santa Claus with his sleigh.

Jeremy and Mandy Voakes, from Morecambe, spend six months setting up their impressive exterior lights, which is made of 150,000 light bulbs and requires 16,000 watts of power.

The decorations are so eye-catching, RAF fighters use the Voakes house as a navigational marker along the Cumbira coast.

They’ve also allowed the family to raise £20,000 for their local NSPCC branch, and have raised £1,238 so far this year for the children’s charity. 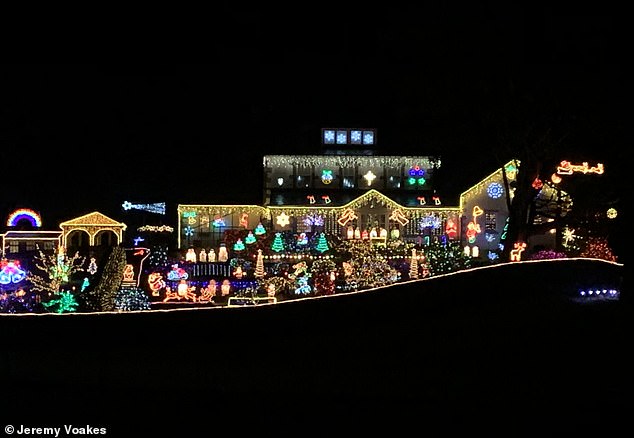 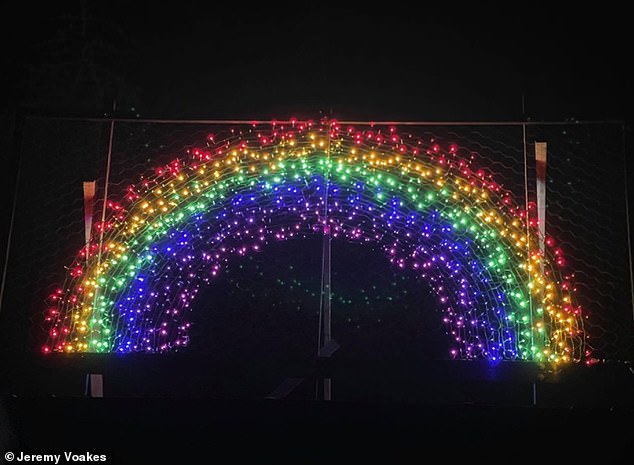 This year, the family have put together a 2,000-bulbs rainbow to honour the NHS staff who’ve kept working during the coronavirus pandemic 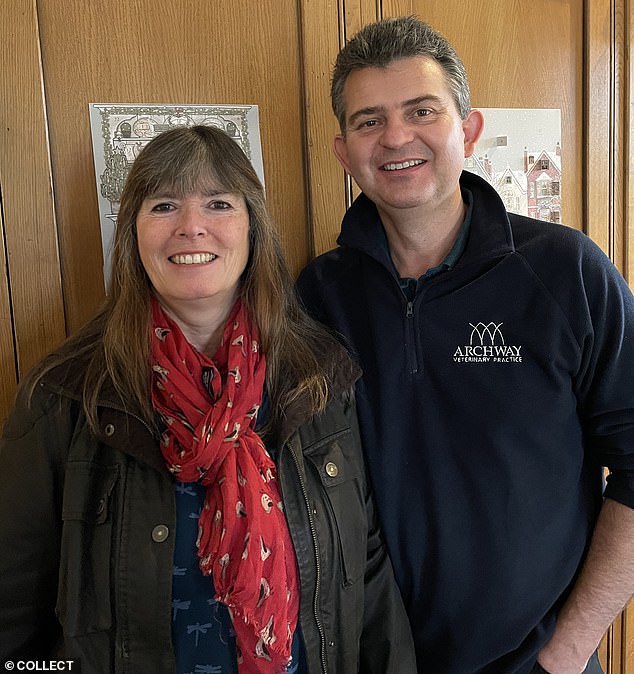 The lights are the work of Jeremy and Mandy Voakes, from Morecambe, pictured

It takes the family two months to unpack the festive bulbs, and another two to three months to pack them all together once Christmas has come and gone.

Veterinarian Jeremy, 51, told the Sunday Times he was ‘obsessed’ with his whimsical displays of Santas, reindeer, and snowmen, which is admired by locals and tourists alike who like to stop by the family’s house to see their handy work.

Bringing the lights to life takes a month, with Jeremy clocking up 26 days and Mandy 20. Jeremy explained he usually starts on October 1st each year to make sure the display is ready in time for December 1st.

Son David, 24, and daughter Jess, 18, also pitch in, helping their parents untangle yards of wires and bulbs. One tree alone is decorated with 10,000 bulbs.

The family, who have been decorating their abode in dazzling fashion for the past 20 years, took a break in 2019 because they were busy moving Jeremy’s vet practice to another building.

But they are back this year, hoping to bring some Christmas cheer and joy to their community after a ‘tough year’ due to the pandemic. 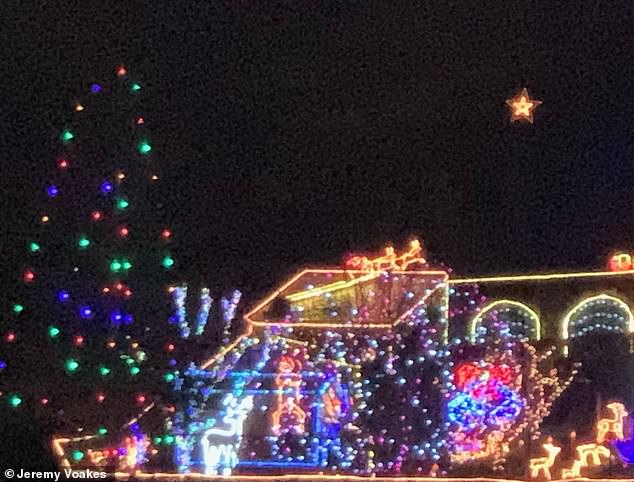 The left side of the family’s Christmas display, with reindeer, a tall Christmas tree, Santa and a sleigh

‘I was glad of the break, which proves I’m not addicted. But I probably am obsessed,’ Jeremy said.

‘Everybody has had such a tough year this year because of the pandemic that we thought: why not try to put a smile on everyone’s faces?’ the father-of-two went on.

This year, the family have created a 2,000-bulb rainbow to honour the hard work and sacrifices of the NHS’s frontline workers.

And with their display, the Voakes have raised £20,000 over the years for their local branch of the NSPCC children charity. This year, they have raised £1,238 so far.

They admitted keeping the display alight was a struggle with hundreds of plugs dotted around their house to power the gigantic Christmas decorations, which costs about £2.50 an hour in electricity. 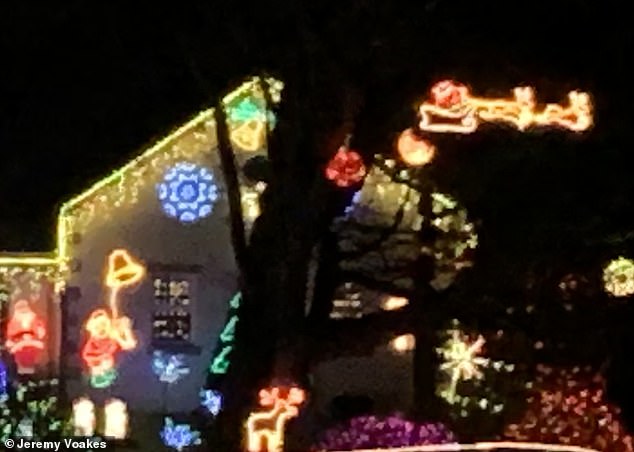 It takes Jeremy two months to take all the bulbs out, untangle the wires and put the lights up, enlisting the help of the whole family

An view of the complete display: The house is so bright, it is used by RAF pilots as a navigational point 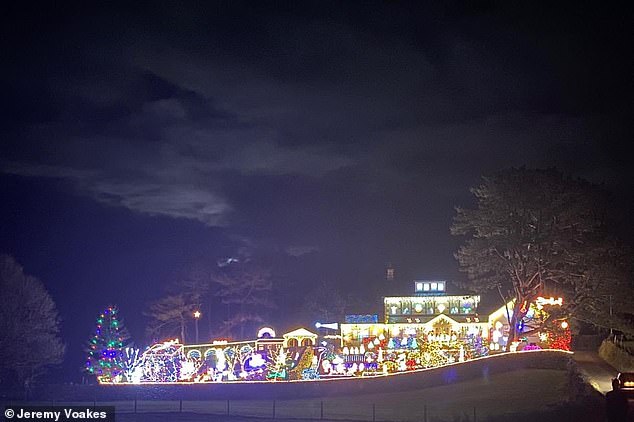 Nighttime at the Voakes. The family admit the display cost them £2.50 an hour in electricity when it was lit up 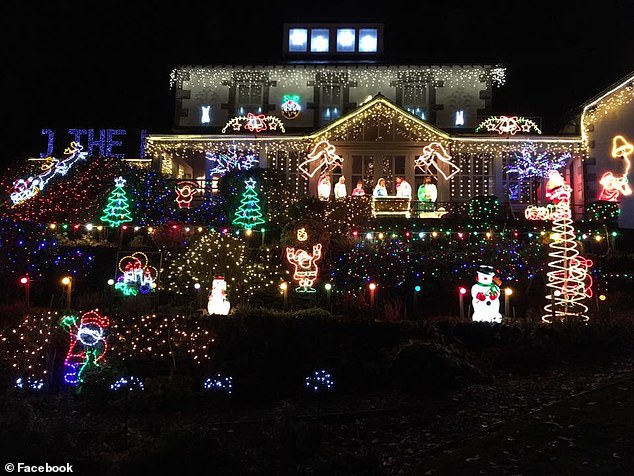 The Voakes’ Christmas display in 2016, with Snowmen, several Santas, and a sea of LED Christmas lights

The family also said they kept their underfloor heating off as a safety precaution.

Mandy added she’s learned to accept her husband’s obsession with putting the display together.

‘He loves doing it. Just when I think we’re finished, he’ll go into the garage and fetch another box of lights and I’ll think, “Oh, no, there’s more to go!”,’ she said.

Jeremy said the family kept the display up until January 6, when the herculean task of putting them away starts.

The father-of-two said he would usually have all of the bulbs down by the end of January, but that packing them up in their boxes took much longer.

Jeremy said he checked each of the 400,000 LED lights and fixed the one that needed repairs before putting them away, which could last up until Easter, only to be unpacked six months later.

If you wish to donate to the Voakes’ charity effort, you can do so here.