State health and hospital pages have been swept up in Facebook’s mass ban of news publishers in Australia, a move which risks undermining public health messaging ahead of the coronavirus vaccine rollout which begins next week.

The official government health pages for Queensland, the ACT, South Australia and Tasmania were all blocked, while the federal Department of Health page remained active. 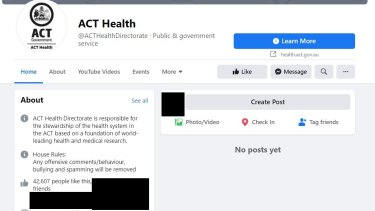 “Three days before our COVID-19 vaccine rollout, Australians using Facebook as their primary source of news can no longer get access to credible information about vaccination from news organisations and some government and public health organisation pages,” she said.

“This is the very time we rely on people accessing vaccine information easily, from their preferred platform.”

A St Vincent’s Health Australia spokesman it was “extremely concerning” to discover the Melbourne hospital had been blocked, particularly because Australia was “on the eve” of the COVID-19 vaccine rollout.

“We hope this situation can be rectified very shortly,” the organisation said.

Content on pro-vaccination group Light For Riley’s Immunisation Foundation of Australia page has also been scrubbed by Facebook.

“We advocate for vaccines and educate the community about the importance of vaccination,” the organisation tweeted. “Why the assault on immunisation-related pages, right before the COVID vaccine rollout?”

Large corporations and peak sporting bodies are also affected by the tech titan’s decision, as well as the Bureau of Meteorology and Fire and Rescue NSW.

In a statement, Facebook said government pages should not have been impacted by the ban.

“The actions we’re taking are focused on restricting publishers and people in Australia from sharing or viewing Australian and international news content,” the Facebook spokesperson said.

“As the law does not provide clear guidance on the definition of news content, we have taken a broad definition in order to respect the law as drafted. However, we will reverse any pages that are inadvertently impacted.”