Lewis Hamilton will face pressure from both Red Bull cars as he starts on pole position at the Emilia Romagna Grand Prix in the second race of the Formula One season. Hamilton held off Sergio Perez and Max Verstappen to secure the 99th pole position of his career by just 0.035 seconds on Saturday, and is set to be challenged from the start at Imola in northern Italy by the pace of Red Bull.

The seven-time world champion battled with Verstappen in the opening race of the season in Bahrain last month, eventually holding off the Dutchman in a thrilling ending that set the tone for what promises to be a gripping and competitive 2021 campaign. Ferrari’s Charles Leclerc and AlphaTauri’s Pierre Gasly start in fourth and fifth, while Hamilton’s Mercedes team-mate Valtteri Bottas lines up in eighth in a race that is set to give us a further indication of the validity of Red Bull and Verstappen’s title challenge this year.

There’s a lot of spray coming off the back of the cars as they make their way round. And Charles Leclerc spins off the track!

The rain has had an impact on team plans and strategies, here’s how they line up.

F1 in Italy, it just feels that extra bit more special doesn’t it?

NORRIS: ‘IT MAKES IT MORE EXCITING'

Lando Norris on the track conditions to Sky Sports: “It’s tricky. It’s wet at turn two but it’s dry at the back [of the course]. It makes it more exciting, it’s challenging for us. It’s a lot of fun, as long as I keep it on the road.”

As the drivers line up for the Italian national anthem, here’s a reminder of how they will start on the grid:

Lance Stroll’s rear-brakes were on fire as he came out of the pit. It’s out now, but his team have a major repair job to do on his car before the start of the race.

Elsewhere, Bottas is told he’s has a suspected rear-left puncture, so he may require an early pit stop.

Lance Stroll’s rear-brakes were on fire as he came out of the pit. It’s out now, but his team have a major repair job to do on his car before the start of the race.

Elsewhere, Bottas is told he’s has a suspected left puncture, so he may require an early pit stop.

ALONSO IN THE GRAVEL

Fernando Alonso, on his way to the grid, has spun off the track and into the gravel at Tosa. It looks like he’s sustained damaged to his front wing and has had to go back to the pit for a quick repair. Lando Norris offers an update on the track conditions on the team radio: “The final sector is dry,” he says, “but the first sector is sketchy.”

RAIN ON THE TRACK

The weather has changed quite dramatically since my last forecast update 10 minutes ago, with the heavens opening in a short burst of rain. Parts of the track are dry, while others are sodden. 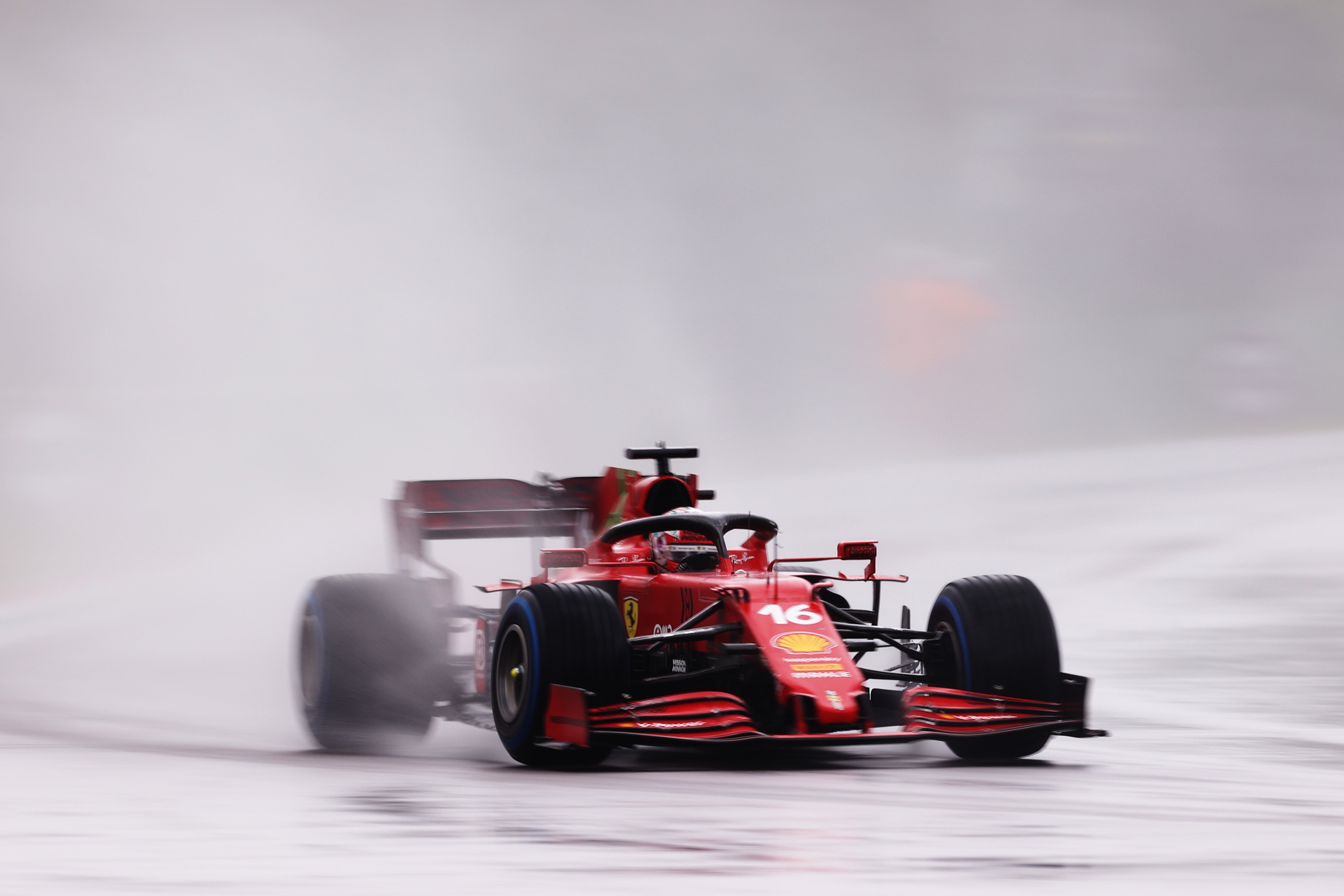 Lewis Hamilton said he “did not expect” to be starting on pole ahead of the Red Bulls today due to their pace in practice on Friday, but he produced a stunning lap to qualify 0.035 seconds ahead of Perez yesterday. It sets up an intriguing battle, and it will be fascinating to see the Red Bull strategy for Perez and Verstappen today.

Hamilton has his team-mate, Valtteri Bottas, in eighth, which isn’t much help, but it’s promises to be a tight battle in midfield with Charles Leclerc, Pierre Gasly and Lando Norris starting ahead of the Mercedes driver.

Further back, George Russell qualified in 12th and will have former F1 world champions Sebastian Vettel and Fernando Alonso on his tail from the off.