Musk predicted his growing network of broadband satellites would ‘not cause any impact whatsoever in astronomical discoveries.’

SpaceX has so far sent about 300 Starlink satellites into orbit – with plans to grow that number, potentially up to 42,000.

Scientists raised objections after the initial batch appeared as a train of bright lights shortly after they launched last year.

They have argued that they were a death knell for both optical and radio astronomy, with the European Southern Observatory saying it could harm astronomers ability to spot dangerous asteroids and supernovae. 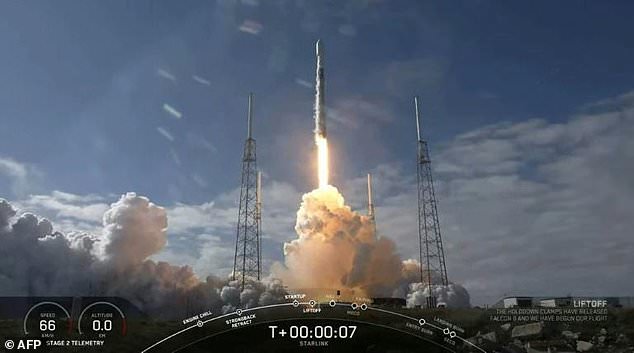 This video still image provided by SpaceX shows a SpaceX Falcon 9 rocket as it lifts off to launch 60 new Starlink satellites into orbit from Cape Canaveral Air Force Station, Florida on February 17, 2020

Speaking at a satellite internet conference in Washington, DC, Elon Musk said his company had already taken measures to reduce their reflectivity.

‘I am confident that we will not cause any impact whatsoever in astronomical discoveries, zero,’ he said.

The billionaire said the company would ‘take corrective action if it’s above zero.’

He said the issue only occurred as the satellites were ‘tumbling’ as they raised their orbit, and that once they achieved their final flight path, the issue went away.

‘I’ve not met someone who can tell me where all of them are,’ said Musk. ‘So it can’t be that big of a deal.’

While he has predicted no impact, he did say that SpaceX was working with the science community to reduce the potential for reflection.

This includes painting the antennas black instead of white, and placing a sunshade on the satellites to make them less visible.

A study by the European Southern Observatory into the impact of satellite constellations – such as Starlink – found most telescope arrays could mitigate against the problem – but some would still be affected.

Wide-field surveys – particularly those done with large telescopes such as the US National Science Foundation’s Vera C Rubin Observatory – would be most affected.

Up to half of exposures with the Rubin Observatory would be ‘severely affected’, depending on the time of year and the time of night, the study found.

‘Mitigation techniques that could be applied on ESO telescopes would not work for this observatory although other strategies are being actively explored.’

The system of satellite broadband coverage is due to go live in the northern United States and Canada later this year and expand to global coverage by 2021.

Musk wouldn’t be drawn on the cost to users, nor on precise speed, but said it would be enough to stream high definition movies and to play high-end video games.

He added that the user terminal would look like a ‘UFO on a stick’ and would not require a specialist to install, unlike other home satellite dishes.

‘The box will have just two instructions and they can be done in either order: point at sky, plug in,’ he said.

The dish would then automatically align itself to a target satellite. 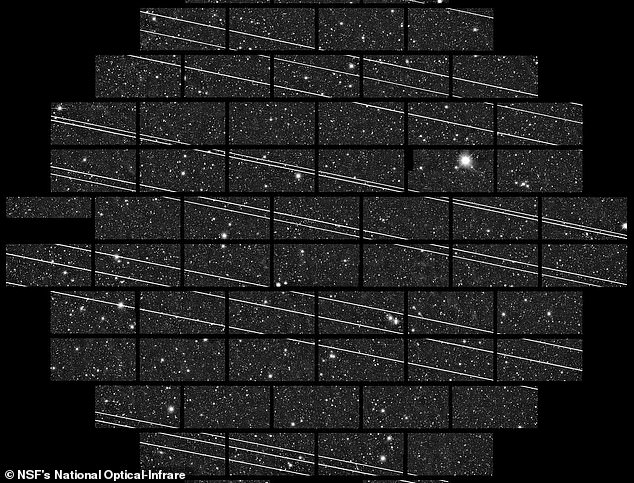 Musk said the network was primarily targeted at a niche market of three to four per cent of users who live in remote areas.

He said Starlink was not a threat to traditional telecommunications companies.

He also dismissed the potential impact of next-generation 5G networks on his business model, saying that technology was excellent for high density cities but didn’t have the range to do well in rural settings.

Musk said he was hoping to generate $30 billion revenue a year, or 10 times what SpaceX is earning from its space launches, and plough the profits back into rocket and spaceship development.

Several rivals are also vying for a slice of the pie, including London-based startup OneWeb and giant US retailer Amazon, whose Project Kuiper is far less advanced.

WHAT IS STARLINK AND WHAT ARE ITS GOALS?

Elon Musk’s SpaceX has launched the fifth batch of its ‘Starlink’ space internet satellites – taking the total to 300.

They form a constellation of thousands of satellites, designed to provide low-cost broadband internet service from low Earth orbit.

The constellation, informally known as Starlink, and under development at SpaceX’s facilities in Redmond, Washington.

Its goal is to beam superfast internet into your home from space.

While satellite internet has been around for a while, it has suffered from high latency and unreliable connections.

Starlink is different. SpaceX says putting a ‘constellation’ of satellites in low earth orbit would provide high-speed, cable-like internet all over the world.

The billionaire’s company wants to create the global system to help it generate more cash.

Musk has previously said the venture could give three billion people who currently do not have access to the internet a cheap way of getting online.

It could also help fund a future city on Mars.

Helping humanity reach the red planet is one of Musk’s long-stated aims and was what inspired him to start SpaceX.

The company recently filed plans with the Federal Communications Commission (FCC) to launch 4,425 satellites into orbit above the Earth – three times as many that are currently in operation.

‘Once fully deployed, the SpaceX system will pass over virtually all parts of the Earth’s surface and therefore, in principle, have the ability to provide ubiquitous global service,’ the firm said.

‘Every point on the Earth’s surface will see, at all times, a SpaceX satellite.’

The network will provide internet access to the US and the rest of the world, it added.

It is expected to take more than five years and $9.8 billion (£7.1bn) of investment, although satellite internet has proved an expensive market in the past and analysts expect the final bill will be higher.

Musk compared the project to ‘rebuilding the internet in space’, as it would reduce reliance on the existing network of undersea fibre-optic cables which criss-cross the planet.

In the US, the FCC welcomed the scheme as a way to provide internet connections to more people.