Sailing from June 9, 2022 on three and four night itineraries around the Caribbean, the natural gas-powered vessel will feature Disney's first ever theme-park style ride at sea. 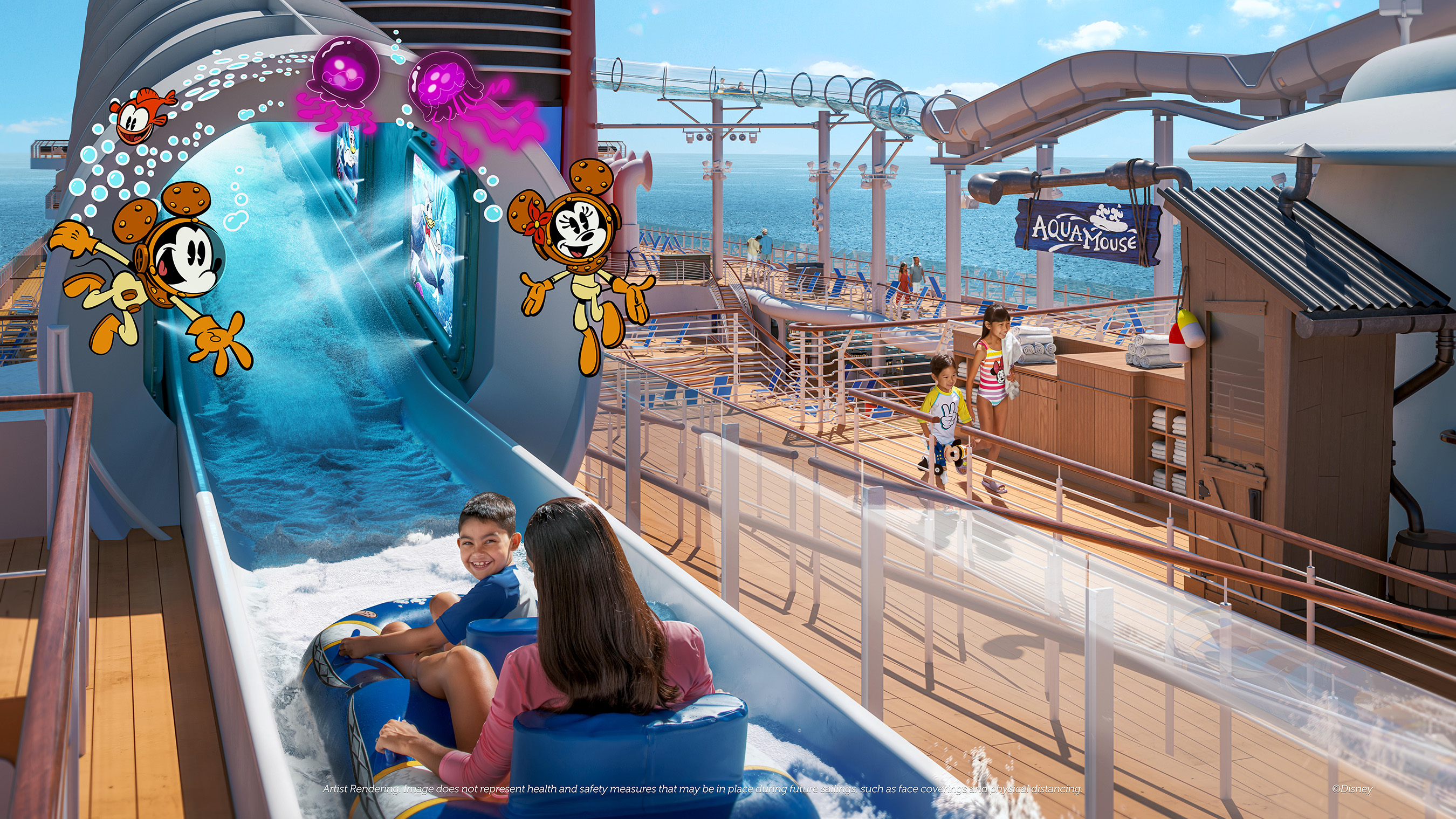 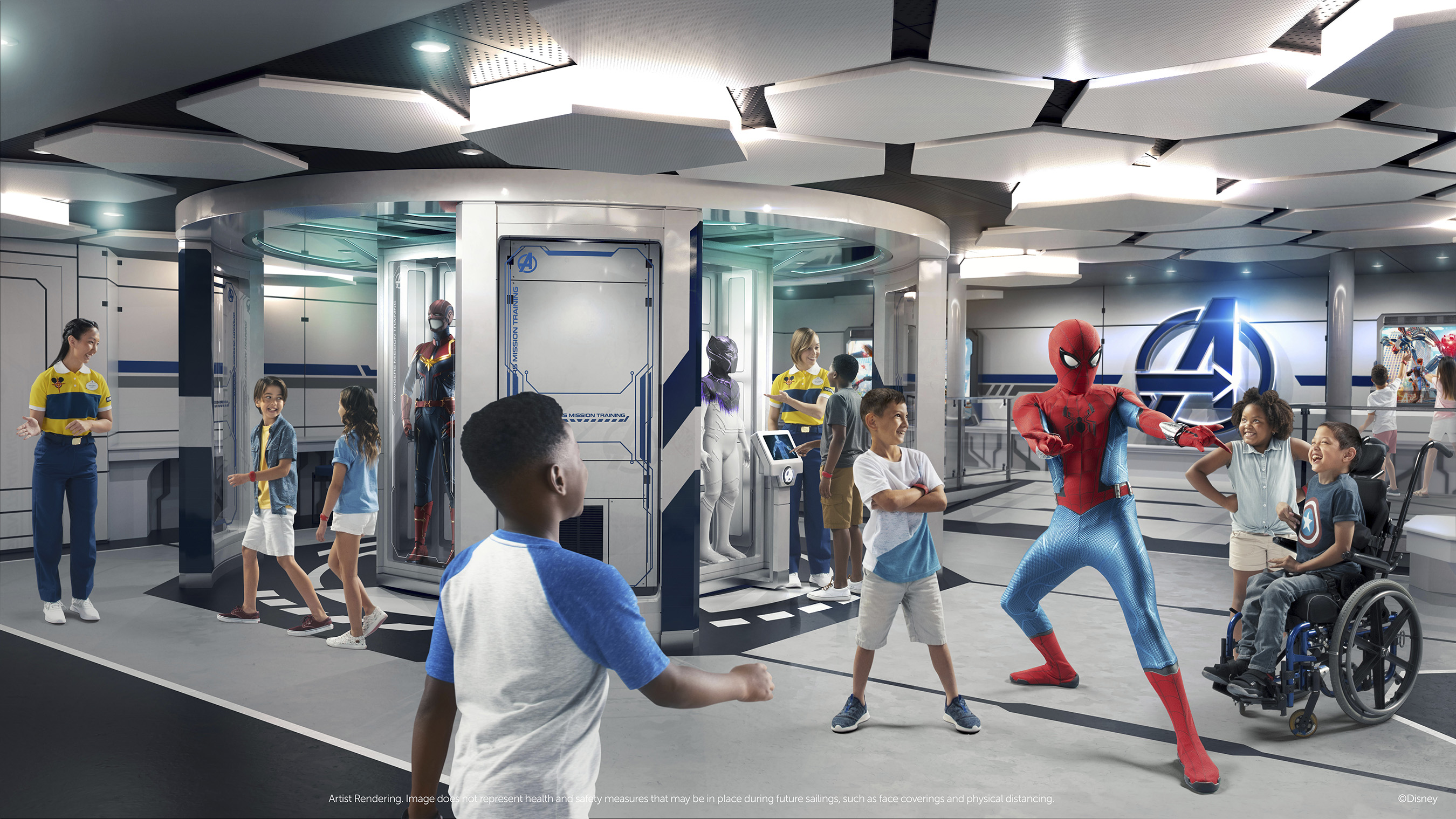 Suspended above the upper decks, AquaMouse will be a 760 feet water-coaster that zigs, zags and zooms through the air for over two minutes.

Themed around The Wonderful World of Mickey Mouse animated shorts, the water attraction will include a cartoon storyline, lighting, special effects and "surprises".

But it's not all about the kids, as the new ship will also feature the first Star Wars attraction ever designed specifically for adults, Star Wars: Hyperspace Lounge.

The stylish hangout is crafted to resemble a luxurious yacht with a huge special effects window looking out into space.

Animations on the massive screen, designed by special effects experts at Industrial Light and Magic will appear to transport revellers at light speed to planets such as Batuu, Tatooine and Mustafar. 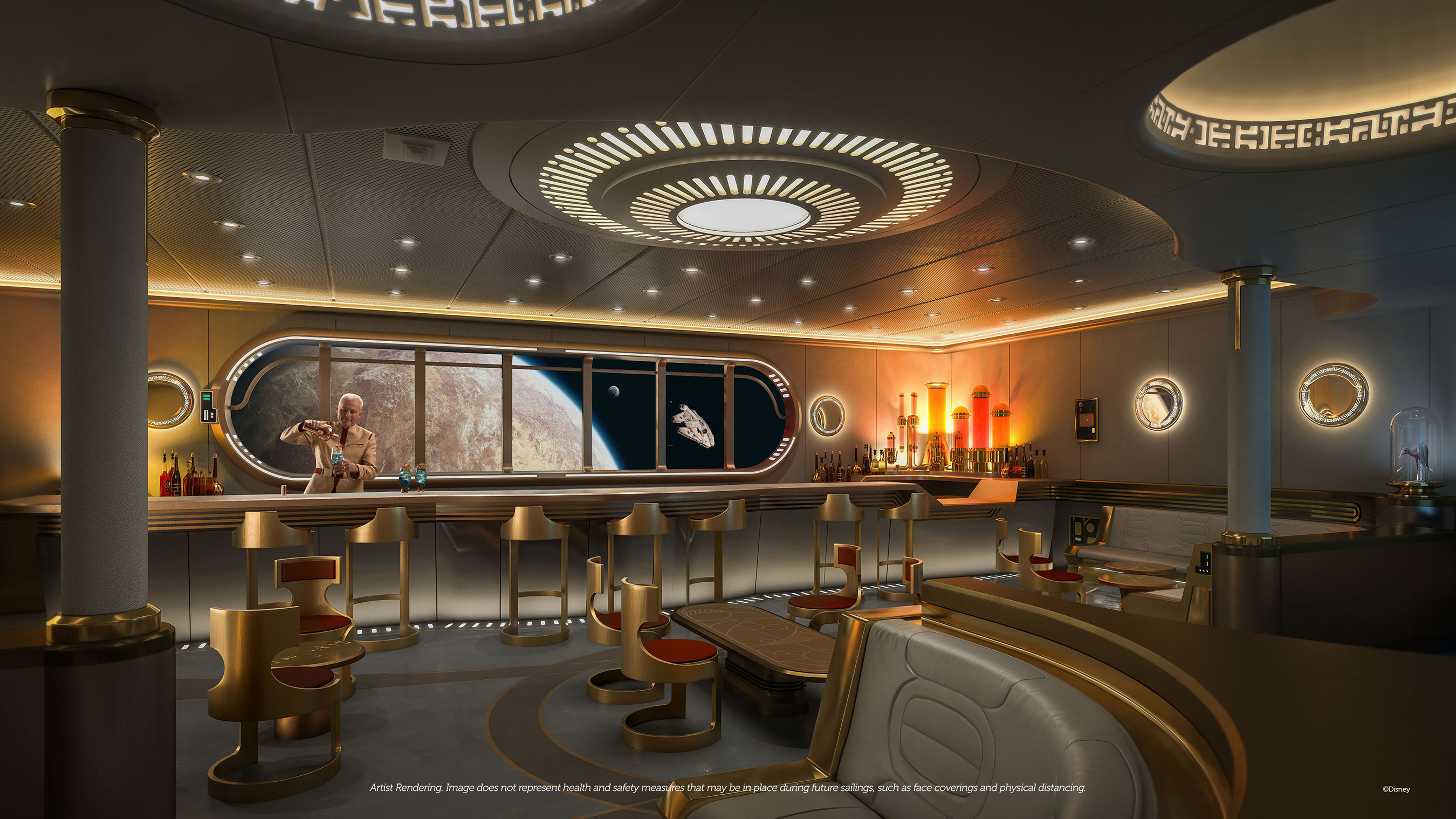 Inspired by baddie Dryden Vos' luxury yacht in Solo: A Star Wars Story, the space-jumping tour takes design cues from the more glamorous side of the Star Wars Universe.

Back on the pool deck, along with AquaMouse, the outdoor area will feature six pools and casual dining options. 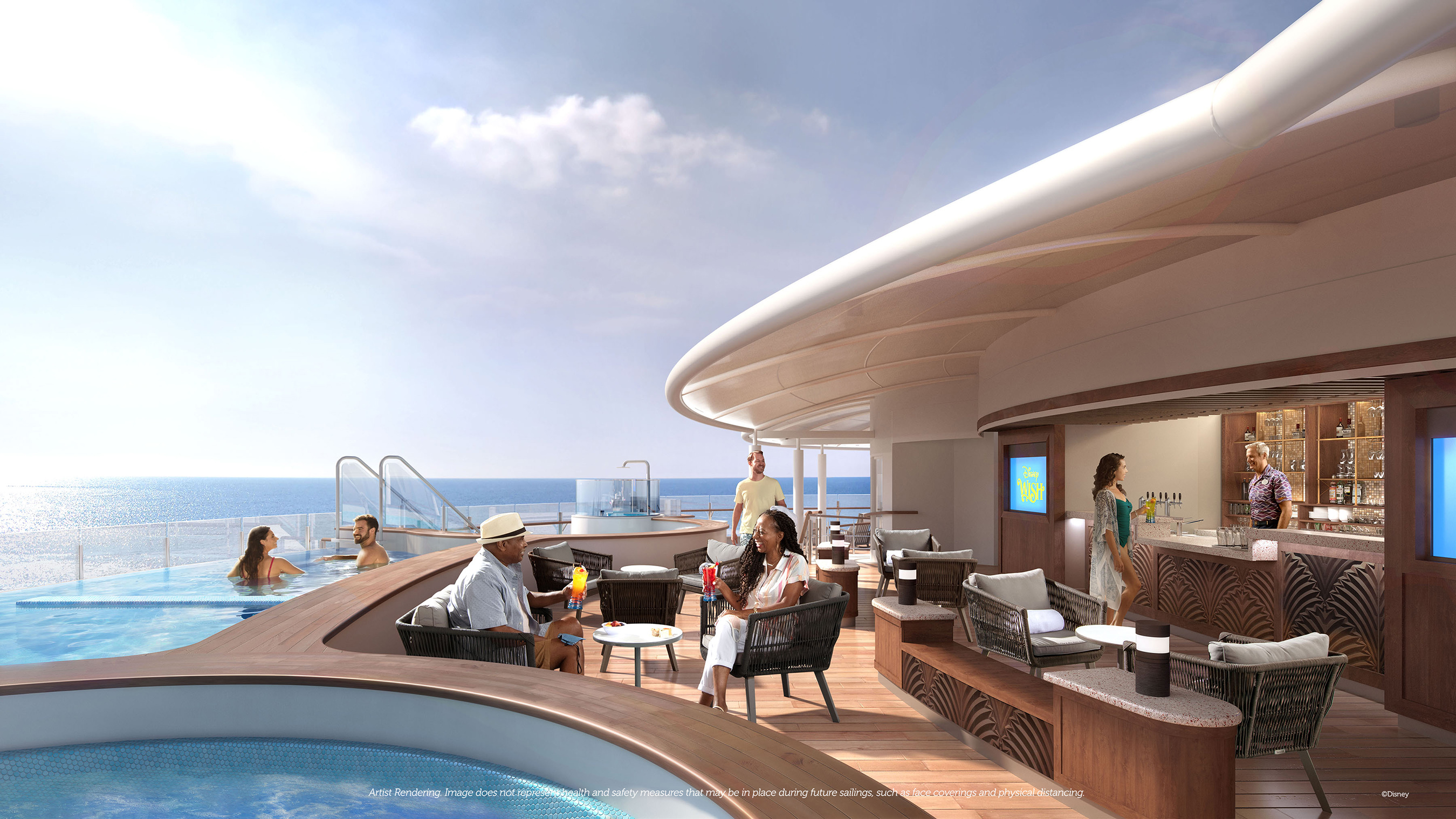 Over three and four night sailings, which will stop at Nassau in the Bahamas and Disney's Castaway Quay, guests will have an incredible amount of entertainment to keep the entire family busy.

Areas for entertainment as a whole family include The Grand Hall which is the first to include a stage, for pop-up shows and interactive entertainment. 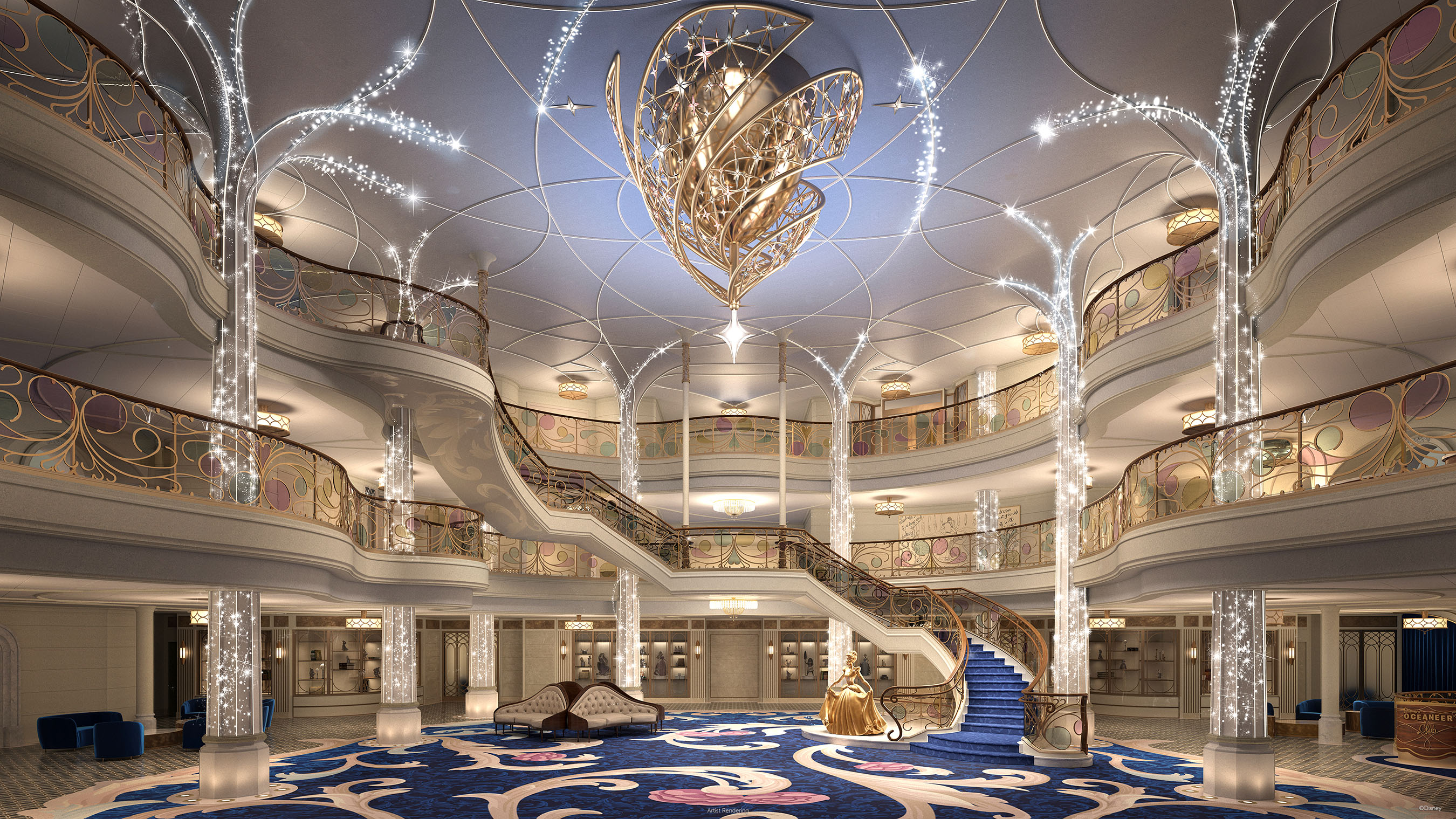 Luna is an immersive entertainment area that will transition from a day setting for family fun into an elegant evening venue for adult only entertainment.

While Walt Disney Theatre will feature Broadway-style stage shows and the Wonderland and Never Land Cinemas will show movies from Disney, Pixar, Lucasfilm and more 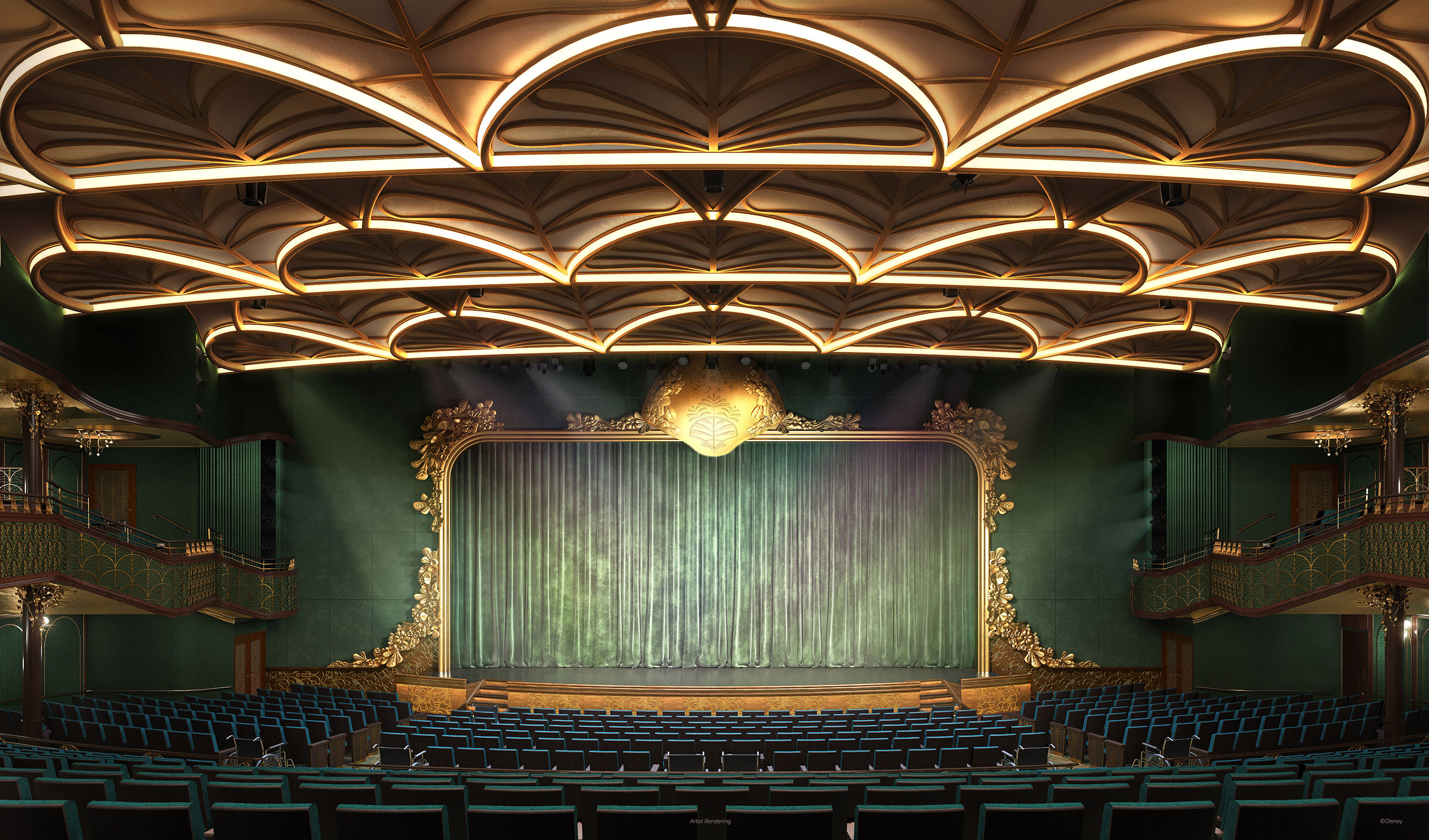 Starting where Frozen 2 finished off it will bring the films to life through live entertainment featuring Elsa, Anna, Kristoff and Olaf, and Nordic-influenced food.

Worlds of Marvel is a cinematic dining adventure, where guests will play an interactive role in an Avengers mission that unfolds around them.

The menu will reflect the expansive Marvel universe with dishes inspired by the fictional Kingom of Wakanda, fictional Sakovia and the real New York City. 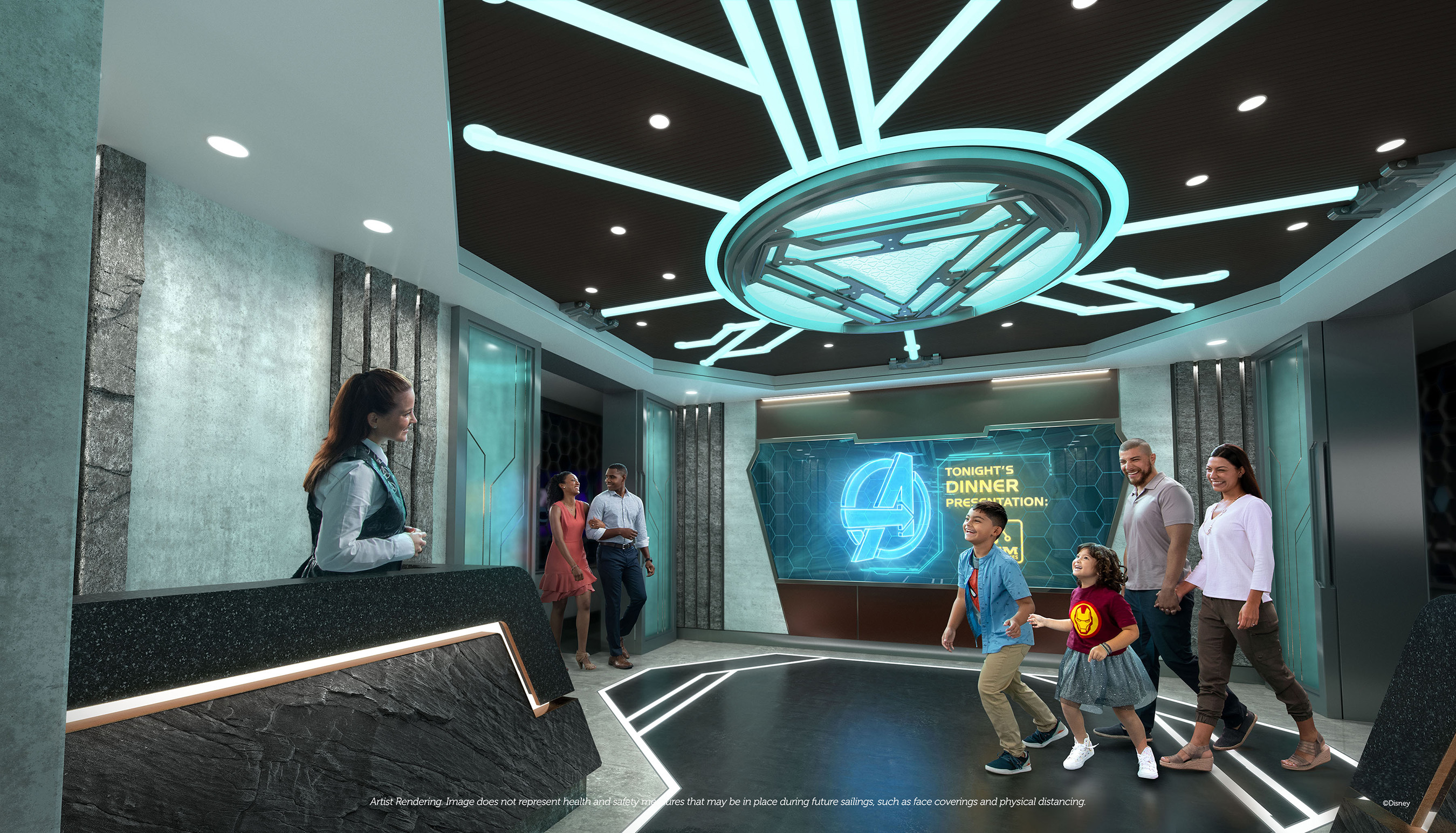 While 1923, named for the year The Walt Disney Company was founded, is an elegant retro restaurant inspired by the golden age of Hollywood.

Adults will have three premium exclusive restaurants all subtly themed around Beauty and the Beast.

Palo Steakhouse will offer authentic Italian in a Cogsworth-inspired setting. Enchanté by three-Michelin-starred Chef Arnaud Lallement has a Lumiere feel about it. While The Rose is a chic lounge for pre and after dinner drinks. 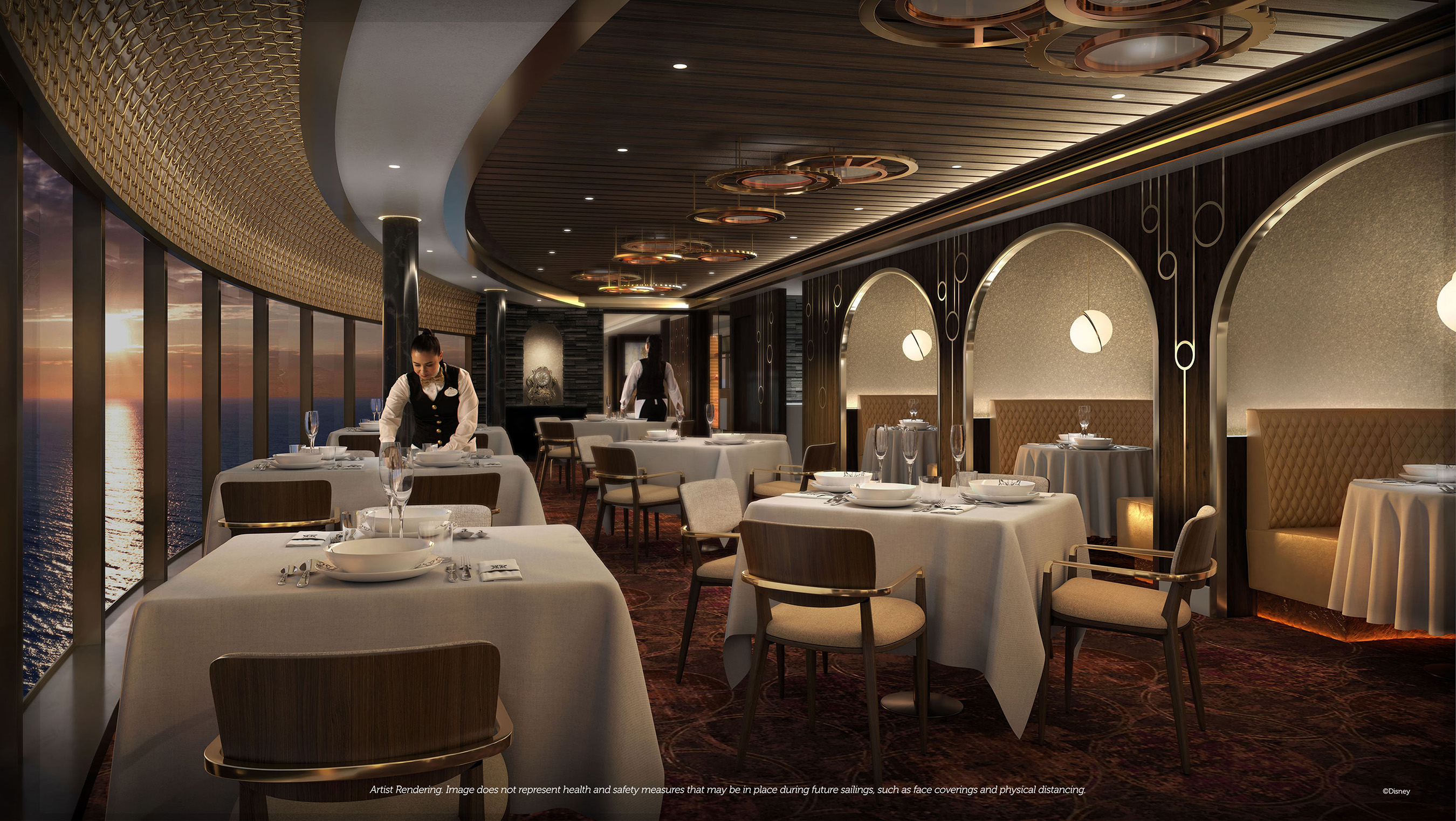 Disney Cruise Line is known for its kids clubs and Disney Wish takes things to the next level.

Oceaneer Club, includes Marvel Super Hero Academy, a high-tech Avengers headquarters where “recruits” train to be the next generation of Super Heroes.

In Fairytale Hall kids can get creative at Rapunzel’s Art Studio, read and act out stories at Belle’s Library, and test icy powers at Anna and Elsa’s Sommerhus. 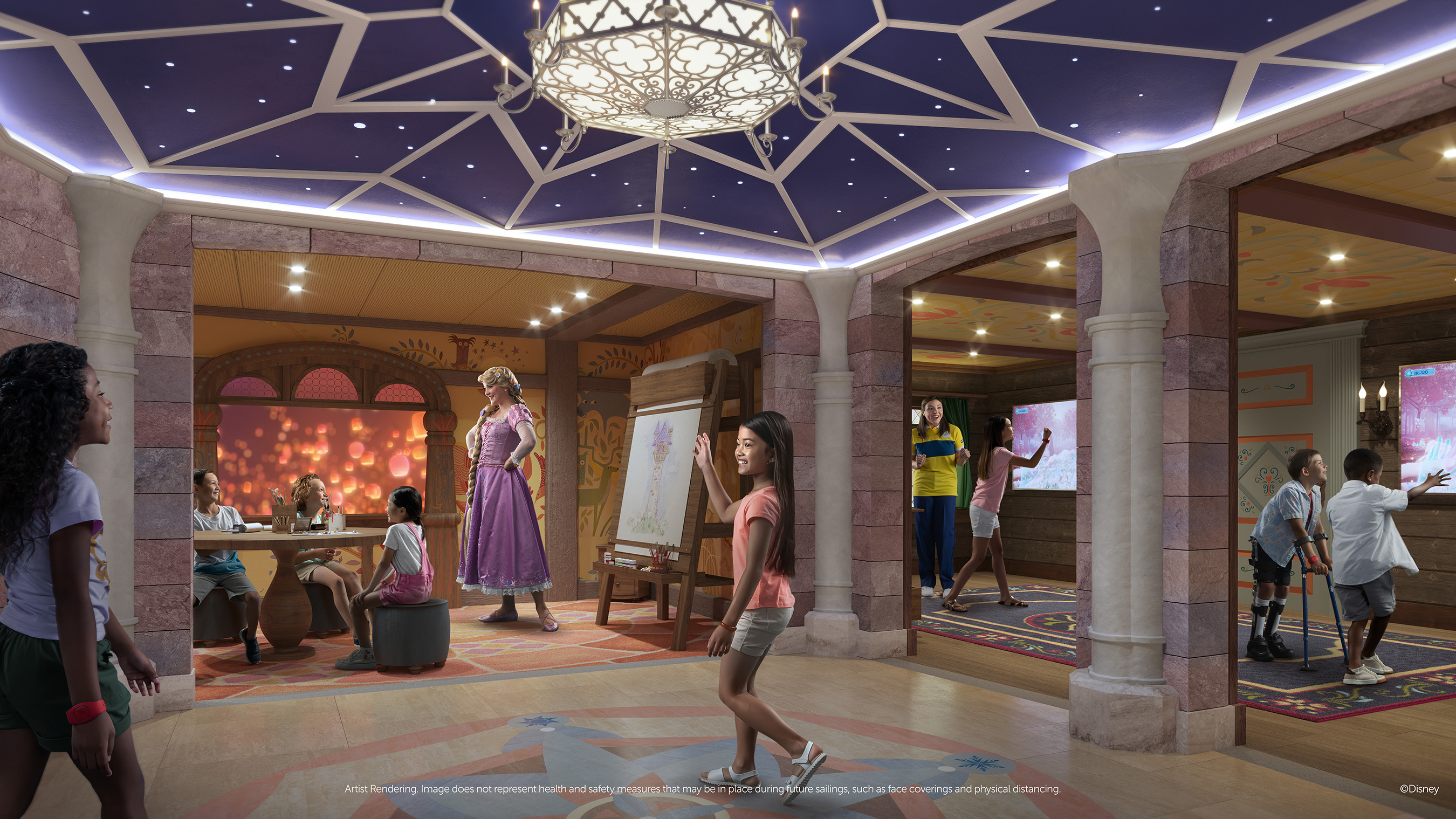 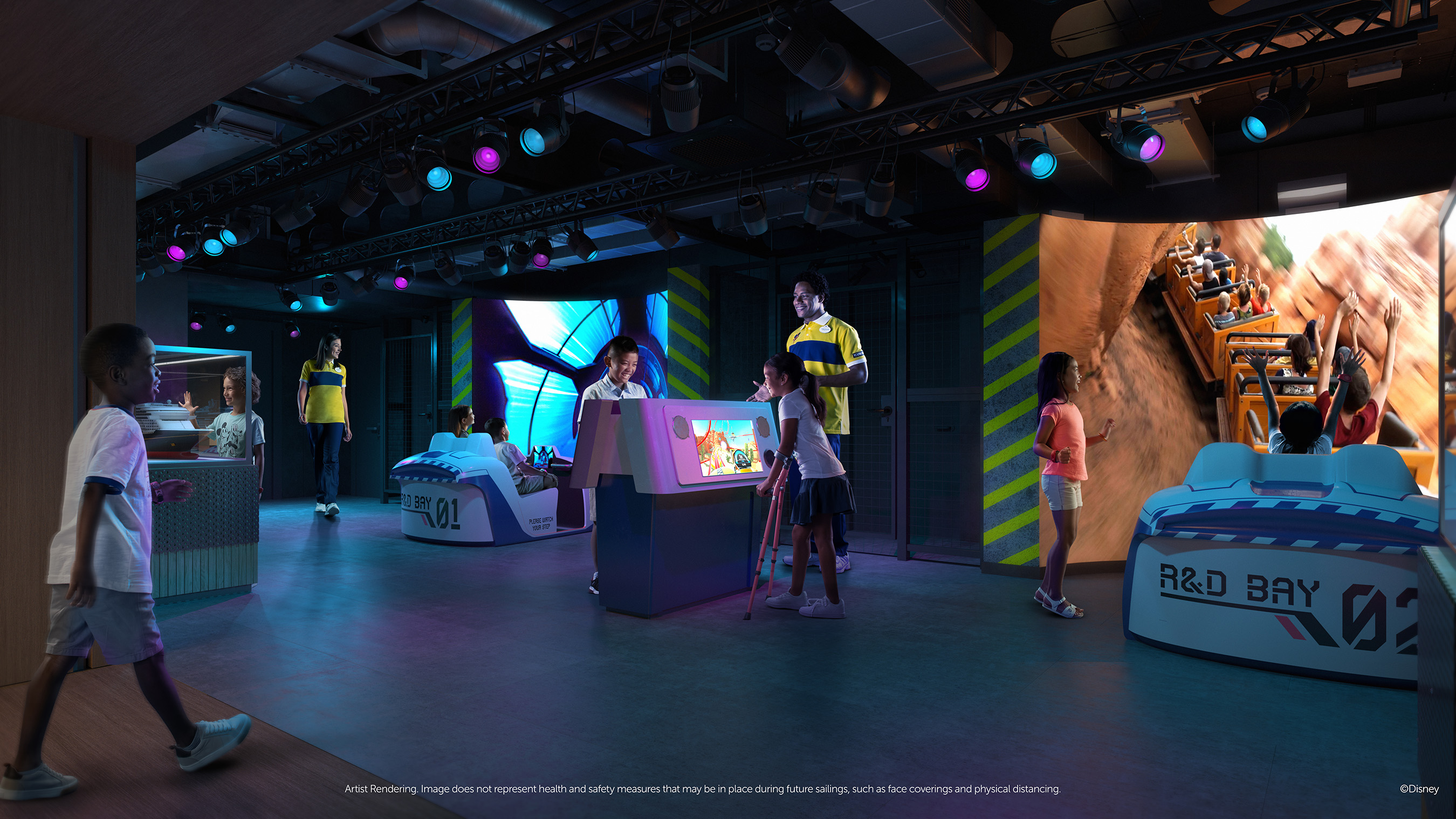 Kids can create their own rollercoasters and then test them out in a simulator.